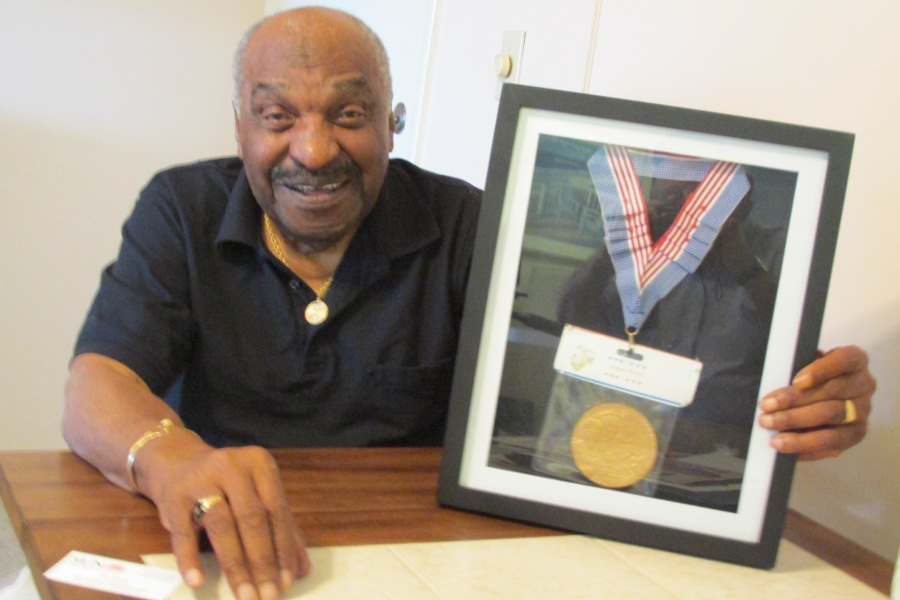 John Newton of Port Charlotte holds a framed Congressional Gold Medal and Commendation he received in 2012 from the U.S. Congress at a ceremony in Washington, D.C. for his services as a black Marine in World War II. He was part of a group of blacks known as the “Montford Point Marines” who were awarded the highest civilian honor the government can bestow. Sun Photo by Don Moore

The Congressional Gold Medal and accompanying commendation on the living room wall of Marine Corps Pvt. John Newton’s apartment at Regency House in Port Charlotte, Fla. was presented to him and several hundred other black World War II Marines during a formal ceremony held on June 27, 2012 at the United States Capital Visitors Center in Washington, D.C.

The Congressional Gold Medal is the highest award given to a civilian by the Congress of the United States. It is awarded for performing an achievement affecting American history.

“In recognition of selfless service and sacrifice the United States Marine Corps proudly honors the legacy of the the Montford Marines. From 1942 to 1949 20,000 African Americans joined the Marine Corps despite harsh segregation in basic training at Montford Point Camp, N.C.

“These Marines served with distinction during some of World War II’s most challenging struggles in the Pacific. Some made the ultimate sacrifice while others continued to serve in Korea, Vietnam and back home and continued fighting for civil rights.

“Montford veterans are legends in the history of the Marine Corps choosing to put their lives on the line in the service of the nation. They advanced the case of civil rights and contributed to President Truman’s decision to desegregate the Armed Forces in 1948.

Newton was born, grew up and graduated from West Chester High School in West Chester, Pa. outside Philadelphia in the early 1940s. After graduation he got a job as a teenaged welder at Sunship Building & Dry Dock Co. in West Chester.

During the middle of World War II he paid a visit to a Marine Corps recruiter. He signed up for the Corps on Sept. 3, 1943.

Because the armed forces were segregated Newton didn’t go to boot amp at Parris Island, S.C. where thousands of white Marine recruits went. Because he was black he was sent to Jacksonville, N.C., a boot camp for black Marines.

What he remembers best after more than 70 years is the trip south from Philly.

“This was the first time I had ever been south and experienced a segregated environment,” the 93-year-old Marine recalled. “I’ll never forget taking the train to Washington where we switched trains for Montford Point, S.C. Because it was a segregated train I had to sit in the back of the car with the other black Marine recruits. It was very humiliating.

“Boot camp was pretty brutal. I nearly died,” Newton said. “We had white officers who only talked to our black noncommissioned officers and not to us directly. Our orders came from our black sergeants and they were damn tough.

“After boot camp we took a slow train to Camp Pendleton near San Diego, Calif. We were only there a couple of weeks when we were put on a troop transport and sent to the war in the Pacific. It took us two weeks to reach the Marshall Islands. I was seasick the whole time.” 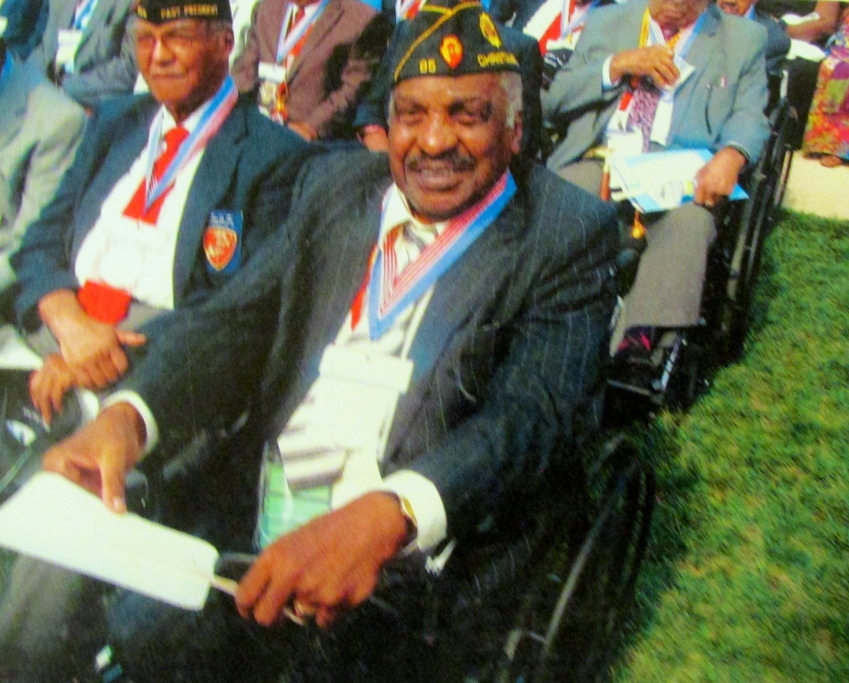 John Newton waits to receive his Congressional Gold Medal together with some 300 plus other black Marines during a ceremony in Washington, D.C. more than six decades after World War II. Photo provided

Newton was trained to be .50 caliber machine gunner serving with the 51st Defense Battalion. His unit was one of the very few black battalions that wasn’t used for manual labor. He expected to fight the Japanese when he arrived at Eniwetok and Kwajalein—part of the Marshall Island chain. It didn’t happen.

“When we got to Kwajalein we replaced a white outfit that had cleared the island of Japanese,” he said. “The Japanese abandoned the air strip on the island that the U.S. Air Force took over and flew B-29 bombers and Corsair fighters from.“

“What they were doing was getting the black Marines out of the United States and hiding them in the Marshall Islands doing nothing. I ended up on Kwajalein guarding the airstrip against Japanese who had already been run off. We never got to fight at all.”

Newton and his black Marine Corps buddies returned to the U.S. by way of the Panama Canal to Norfolk, Va. During the final days of his return trip to the states he still recalls the hurricane they sailed through to reach port in Virginia.

“This huge ship we were on was being tossed around like a canoe in the storm,” Newton remebered. “I thought I was going to die.”

Somehow Newton took hold of his anger. He realized if he was every going to amount to anything he would have to stop fighting the world and try and invest his energy in obtaining the best education he could.

“I took advantage of the G.I. Bill and enrolled at West Chester State Teachers College. Four years later I graduated in 1951,” he said. “It took a while, but I finally got a job teaching science at Fremont High School in Oakland, Calif.

“Those were turbulent times for race relations in this country. Despite the turmoil I became the principle of Haven Court Junior High School in California. I completed my career in the Education Department of San Francisco State University.

“I finally learned to live with my anger. Unfortunately, I spent too much of my life getting rid of that anger,” the old Marine admitted.

Laura, his wife, died in 1992. Newton moved to San Croix in the Virgin Islands. Three years ago he relocated to Port Charlotte. He has two grown children: John Jr. and Scott. 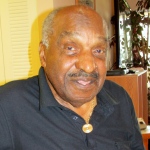 This story was first published in the Charlotte Sun newspaper, Port Charlotte, Fla. on Monday, Nov. 16, 2015 and is republished with permission.