This was Ensign Edwin Morgan of Port Charlotte when he graduated from Officers Candidate School at New Port, R.I. in 1973. He was 23. Photo provided

The high point of Lt. Edwin Morgan’s 5 1/2 year Naval career was the six months he sailed throughout much of Europe and the Middle East aboard the destroyer escort USS Trippe in 1975 as the ship’s supply officer.

A graduate of Florida Southern College in Lakeland in 1972 with a degree in math and physics he went into the Navy in 1973 at the end of the Vietnam War. He was commissioned an ensign that year and went aboard the Trippe in Athens, Greece.

“Before I joined the Trippe the Navy suggested, that because of my degree in math and physics, I should go into nuclear propulsion. I thought that was really nice until they told me I would have to sign up for six years,” the 65-year-old Port Charlotte resident recalled. ‘What do you have if I sign up for two years?’ I asked. That’s when I became a supply officer aboard a Navy ship.”

He joined the Trippe in Athens when it was in the process of showing the flag on a six-month cruise through Europe and the Middle East with its sister ship, USS Hughes, another destroyer escort.

“We reached Dakar, Senegal on Jan. 21, 1975. It’s the most western city in Africa,” Morgan explain. “We sailed on to Monrovia on Jan. 26 and then on to Kenya where several of us went on safari for a few days.

“We had to pay to make the trip, but it was well worth it. There were about five of us who took the camera safari. We were driven through Tsavo National Park. They put us in a big Jeep and drove us all through the park to see the animals. One night we stayed in a lodge near a watering hole where the animals came down to drink the next morning. We shot a lot of great animal pictures right there at the lodge.

“From there we went back aboard the Trippe and sailed around the Cape of Good Hope. It was a very bad three or four days sailing around the tip of Africa. It was so bad aboard the ship they would”t let us go through the passageways for fear we’d get injured.” 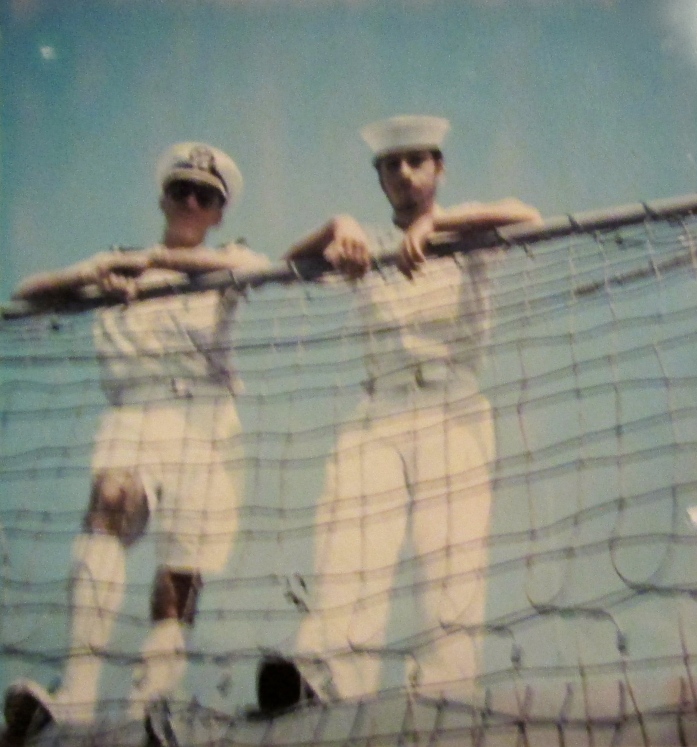 Standing at the railing of the USS Trippe, a destroyer escort, during a cruise to the Middle East in 1973. Morgan is the officer in the Bermuda shorts on the left. Photo provided

Like many sailors before and after Morgan, his crew crossed the equator and he became a Golden Shellback. In an elaborate ceremony aboard the Trippe the first timers were initiated and received a certificate for their participation in the centuries-old event.

“After sailing into Bandar Abbas, Iran the officers aboard the destroyer escort were invited to visit the Shah of Iran at his palace. We were all ready to board his helicopter and fly to the palace when our captain got a message there was a problem in Cyprus and we had to bug out. When we reached Cyprus our job was to make sure the people there didn’t get out of hand. Basically we just maintained order there.”

While sailing from port-to-port the Trippe’s crew might come across a pod of whales at sea. Or spot giant schools of fish at night in the phosphorescence trailing off the ship’s SONAR gear.

“We went to numerous other ports – Karachi, Pakistan; Hodeidah, Yemen; Bahrain, Saudi Arabia,” he said. “One of the most interesting things about the trip was the way we returned home. We had three ways to get back to the states and one of them was sailing through the Suez Canal.

“There hadn’t been a war ship through the canal in eight years. We got permission to go through the canal—Trippe and the USS Hughes. It looked like a war zone—buildings were all blown up along the Suez,” Morgan recalled.

“When we arrived back in Charleston, our home port, my wife, Emma, who I had married after graduating from Officers Candidate School when I joined the Navy was waiting for me on the pier,” he said. “To see her on the pier when we pulled into port after six months was a big thing.”

After his sea tour, Morgan and his wife were sent to the Philippines for two years where he became the fuel officer at Cubi Point Naval Air Station.

“It was a good billet. We spent two years there with monkeys in our back yard and a house full of servants to cook, clean and cut the grass,” he said. “It was all very nice for a Naval lieutenant.”

At the end of this first 2 1/2 years in the Navy, he decided to reup as long as he could spend his last two years serving in the Philippines.

After he was discharged from the service, Morgan returned to Port Charlotte and joined his father’s real estate firm—Morgan Real Estate. He spent the next 34 years selling real estate in Charlotte County.

“They say, ‘Join the Navy and see the world!’ That certainly is the case. I got to see much of Europe, the Middle East and the Philippines during my 5 1/2 years in the Navy,” retired lieutenant Edwin Morgan said.

This story was first published in the Charlotte Sun newspaper, Port Charlotte, Fla. on Monday, Sept. 14, 2015  and is republished with permission.