Ed and Ginny Robins touch up a mural at the Olde World Restaurant in North Port, Fla. The couple has painted murals on the walls of many area homes and businesses. Sun photo by Don Moore

Ed Robins was in the Navy during the Korean War. He was an airman who never set foot in an airplane and never went to sea. He spent most of his four-year hitch painting murals om the wall of the mess hall at the Jacksonville Naval Air Station.

“My 13-year-old son thought I was an embarrassment, but I thought I was lucky,” the 77-year-old Robins said as he stood on a ladder touching up a giant mural on the wall of the Olde World Restaurant in North Port, Fla.he had painted some time ago.

“Chris, my middle son, came home one day and said there was a new kid on the block. The new boy’s father was at the Chosin Reservoir during the Korean War. He was captured by the Chinese, but he beat up a couple of his captors, swam a river and escaped.

“‘What did you do in the war, dad?’ Chis asked me. When I told him I painted murals on the wall of the mess hall at the naval air station he wouldn’t speak to me for a couple of weeks. He thought I was an embarrassment. He got over it,” Robins recalled with a smile.

“I felt a little guilty about what I was doing while there was a war going on in Korea. I had a couple of friends who were killed over there. But you do what you’ve got to do in the service,” he said philosophically.

Robins’ military odyssey began in 1952. He was a member of the Naval Reserve unit that was activated during the war.

”In boot camp at Bainbridge, Md. they wouldn’t actually let us get on a ship. They had a ship on the blacktop in the middle of the facility called the USS Never Sail. It was used to teach us how to be sailors,” he said. “That was my only sea duty.

He became a truck driver at the Jacksonville Naval Air Station to begin with. He thought that was a pretty good duty during a war, but it got better. 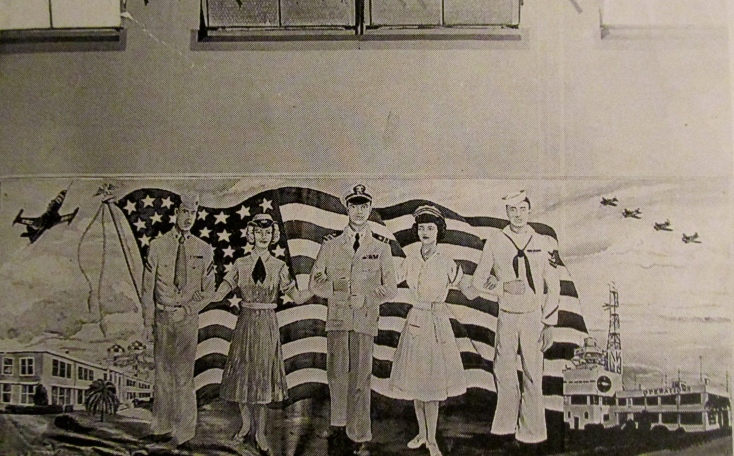 This is more of his work on the walls in the mess hall at the naval air station. Robins filled these walls with his murals for more than two years in the Navy. Photo provided

“The Jax News, the base paper, was looking for a cartoonist. I applied and got the job. I was doing cartoons for about six months when we got a new commander who took over Special Services,” Robins recalled. “Special Services was in charge of taking care of the pool, the movies, the newspaper—that kinda stuff.” Shortly after the new commander arrived he decided to decorate the mess hall. It was as big as a football stadium with big, blank walls. He wanted the walls filled with murals of base scenes,” he said.

Although he had never painted a mural before in his life, Robins said he had the capability to look at a snapshot and invision how to blow it up his mind’s eye. He came the base’s mural painter.

Robins works on his first mural at the Jacksonville Naval Air Station in 1952 during the Korean War. This painting launched his painting career. Photo provided

His first 5-foot by 22-foot mural on canvas depicted various units on the base along with airplanes, a helicopter and an aircraft carrier. The big headache in his first attempt was a Marine Corps emblem.

“We had a Marine Corps colonel on base who wanted the emblem just so. He drove me bananas every day about the Marine Corps emblem,” he said. “After I did the first mural they wanted to expand the thing and put murals all over all the walls.”

His mural painting career was launched and he didn’t even know it at the time. For the next 2 1/2 years Robins painted pictures of Sailors, Marines, WAVES, airplanes, aircraft carriers—anything Navy. He even did a mural of Disney characters for the children’s day care center on base.

Shortly before he was scheduled to get out of the Navy he got a new boss.

“We got this new chief who looked over our operation. He was a deep water sailor who had just gotten off a battleship,” Robins said. “I irritated the hell out of him because I had paint on all my uniforms.

“I only had a month to go and he wanted me to go out and buy a whole new sea bag of clothes. I went to the commander and told him to get the chief off my back or I was gonna quit painting murals. He took care of the chief.

“Just before I was ready to get out of the Navy I asked the commander what I was supposed to do with all my paints and brushes,” Robins remembered. “He told me, ‘If you start stealing them now you can get it all out of here by the time you’re discharged.’ I had enough paints for the first year of painting after I got out of the service.”

Robins took the G.I. Bill and went on to the University of Florida where he graduated in the late ’50s. For a couple of years he decided to teach art in school. 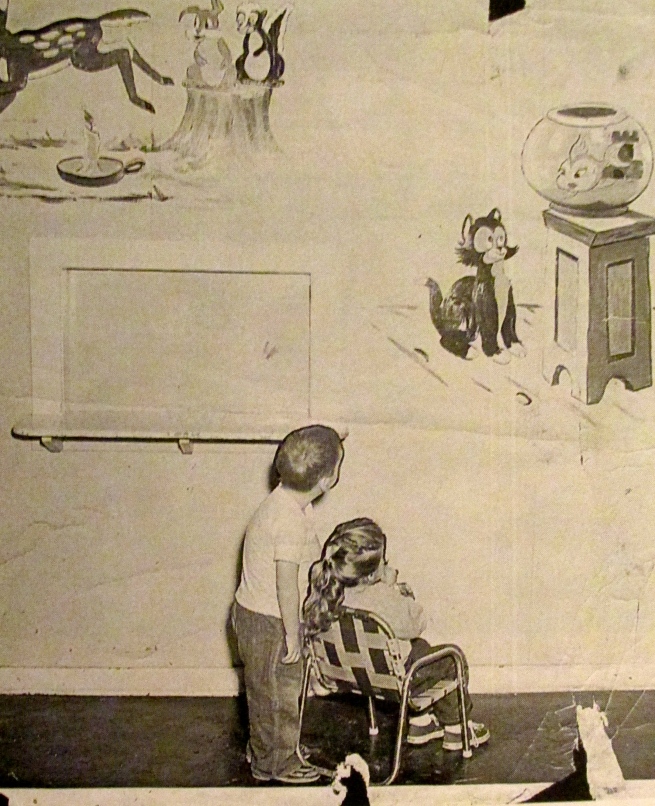 This is the mural he painted at the children’s day care center on the naval base in Jacksonville. Photo provided

“In 1958 I was teaching mentally disturbed children in Maryland. I had this young boy I got involved with who was kinda like a little wounded bird,” he said. “He was about 9-years-old. He would get paint all over his shirt and have a good time. One day I had a mural to do and didn’t show up. The kid got so upset I wasn’t there that he started banging his head against a radiator. Right then I realized teaching wasn’t for me. It was too heavy.”

He started painting murals with his first wife, Marty, as a full time job. He had been doing a little mural painting on the side around the Washington, D.C. area for a while. For 20 years they operated a successful mural business painting pictures on the walls of homes and businesses in the Maryland area.

In 1980 the couple moved to Port Charlotte, Fla. and continued their mural painting business down here.

I did a lot of hiking around introduced myself to people to begin with,” Robins said. “I got involved in Greek Town, a Port Charlotte restaurant, that became Boomers Restaurant. I painted a big Greek mural on the wall there.”

Together he and his wife painted many murals on many homes and businesses in the area over the years.

“In 1998 my first wife suddenly died. She was a heavy smoker,” he said. “For a couple of years I was a widower, but then I met Ginny and some how captured her. When I first met her I didn’t even know she had been an art teacher. I just thought she had pretty legs.” For the past several years he and his second wife have been painting up a storm.They’ve done a lot of murals in homes and businesses and they have many more jobs waiting for them to paint.

Looking back over the years, Robins said, “My service career didn’t hurt me at all. It got me going on something I enjoy and I’ve been doing as a business for more than 40 years.”

This story was first published in the Charlotte Sun newspaper, Port Charlotte, Fla. on Thursday, July 31, 2003 and is republished with permission.

Edmund A. Robins, 76, of Port Charlotte is now painting beautiful murals on Heaven’s walls. He passed away May 22, 2008 at Fawcett Hospital in Port Charlotte. Ed was the son of Karl and Mildred (Pike) Robins, born May 26, 1931 in Rochester, NY. Ed attended Blair High School in Maryland and graduated from University of Florida in Gainesville. He began painting murals while in the Navy, then worked side by side with his wife, Marty, for 40 years as Robins Art Creations. He also designed the artwork for the Washington Senators. Ed and Marty moved to Port Charlotte in 1980 and continued in business there.

Widowed in 1989, Ed met, fell in love, and married Virginia (Ginny) Coroneas. They became Ed & Ginny Robins Murals, painting locally as well as throughout much of the United States, traveling in their RV. Ed loved sports, music, sunsets at the beach, and his cats, “SanDee” and “Inky.” He was crazy about his three sons, their families, and Ginny’s children as well. Ed was a member of St. Maximilian Kolbe Catholic Church and the Sons of Italy Lodge 2507.

Ed will be greatly missed by his sons, Roy, Christopher, and Dana Robins, all of Maryland; stepchildren, Darlene Stowe, Gary Aldridge, and Yvonne Coroneas; sister, Lucille Bryan; 11 grandchildren, 8 step-grandchildren, and 4 great-grandchildren; daughter-in-law, Cindy Robins; and many, many friends. He was preceded in death by his parents and his sister, Isabelle Schrider.

A memorial mass will be 10 A.M., Saturday, May 31, 2008 at St. Maximillian Kolbe Catholic Church in Port Charlotte.
To express condolences to the family, please sign the online guest book.
– See more at: http://www.ltaylorfuneral.com/obituary/Edmund-Arthur-Robins/Port-Charlotte-FL/545096#sthash.Ftp37Xbe.dpuf