This is a shot of Paulsen when he was a machinist mate 1st class serving aboard the USS Saratoga in World War II. Photo provided

Fred Paulsen heard the 20 mm guns on the carrier USS Saratoga firing at will as she cruised off Iwo Jima on Feb. 21, 1945. That’s when he knew they were in trouble.

“It was announced on the carrier’s PA system that kamikazes were approaching. Five-inch guns on nearby destroyers started firing at the incoming Japanese planes. Then we opened up with our 40 mm anti-aircraft guns aboard the Saratoga. As they got closer, our 20 mm guns started firing at them.

“The first Kamikaze hit the bow of the ship about 5 p.m. and knocked out the catapult. That pretty much put our ability to launch planes out of commission,” said the the 79-year-old former sailor, who now lives in Port Charlotte, Fla. “It also blew up some of the planes on deck being readied for takeoff. A section of the flight deck was badly damaged and on fire.

“It was the second Kamikaze that hit the hangar deck that caused most of the destruction aboard the carrier,” Paulsen added. “The plane came through the starboard side and wiped out the carrier’s oil tank. An explosion on the hangar deck afterwards started a huge fire. Planes were burning all over the place below deck. It was an inferno.”

In three minutes, six Japanese planes had scored hits on the Saratoga. She lost 123 sailors and scores more were injured, many seriously.

The efforts of a determined crew kept the carrier afloat. Within three hours they had the fires above and below deck extinguished, he said. It took the carrier about two weeks to limp back to Pearl Harbor for temporary repairs.

She went on to the Navy yard in Bremerton, Wash., for extensive repairs. America’s first fast carrier, built in 1920 at the Navy yard in Camden, N.J., would never see the war zone again. CV-3, as the Saratoga was known in the fleet, spent the remaining months of the war training pilots how to land on a pitching deck. 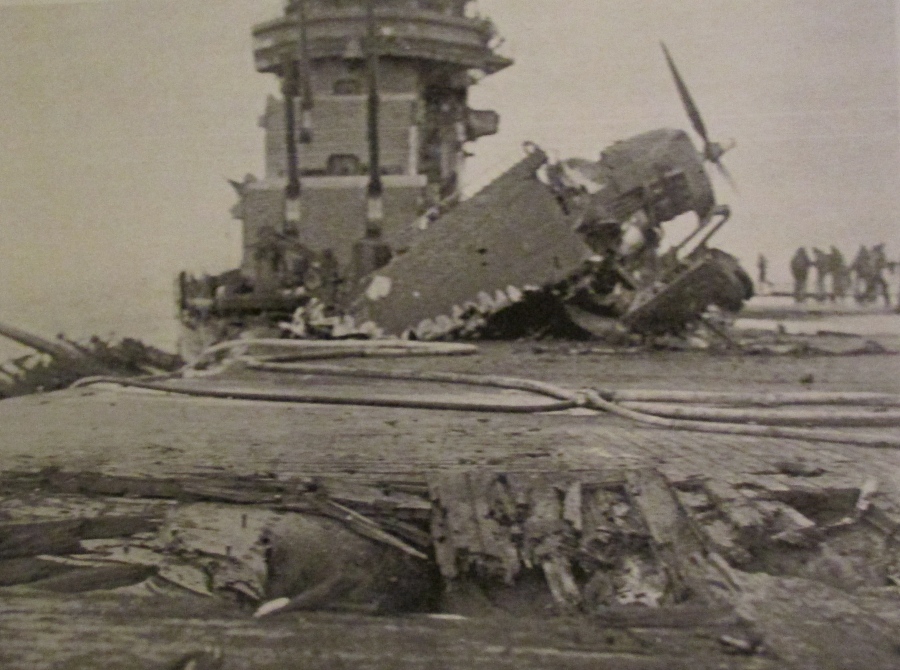 Off the coast of Iwo Jima on Feb. 21, 1945 the USS Saratoga was hit by five Japanese kamikazes in three minutes. Part of the carrier’s damaged flight deck can be seen in the foreground and a disabled U.S. fighter plane is shown crumpled in the background. Photo provided

When the Japanese planes were attacking the old carrier fast and furiously off Iwo Jima, Paulsen’s battle station was at the high-pressure air line below deck in the ship’s engineering section.

It wasn’t the tangle with the kamikazes that gave Paulsen a close brush with death. It was when the Saratoga was torpedoed on Jan. 11, 1942 500 miles off Oahu, Hawaii, that his chances of dying were far better, if it hadn’t been for fate.

The deep-running Japanese torpedo hit No. 8 and No. 10 fire rooms killing six sailors. Paulsen’s battle station at that time was No. 10 fire room, but he was on kitchen-patrol at the time.

“I thought when I went on this monster of a carrier that was almost three football fields long and I was in one little fire room below deck nobody was gonna bother me down there,” he said 60 years later. “And the first place the enemy hit was right where I as suppose to be.”

The badly damaged carrier was sent back to Bremerton for her first repairs during the war. She was put in shape again and sent back to sea in early June 1942, just in time to miss the Battle of Midway. This was where American forces went on the offensive by sinking four Japanese aircraft carriers in less than 24 hours. It turned the enemy fleet around and with it the tide of battle in the Pacific.

Paulsen graduated from high school in 1940. His father had died two years earlier. Times were tough. After training to become a machinist mate he was stationed aboard the Saratoga at San Diego, Calif., in July 1941.

After the Japanese bombed Pearl Harbor, the Saratoga sailed for Pearl with the carriers USS Lexington and USS Enterprise.

“Our first assignment was to take some planes to Wake Island to support the Marines who were under attack,” he said. “The day we arrived at Wake it fell, so we delivered the planes to Midway.”

The Saratoga made the invasion of Guadalcanal in August of 1942 and ran into the Japanese fleet off the Eastern Solomon Islands along with the Enterprise. The Enterprise was badly damaged in the shootout, but the Saratoga escaped without injury. The Japanese lost the aircraft carrier Ryujo and a couple of cruisers.

On Aug. 24, 1942 the Saratoga took another “fish” in her starboard side from a Japanese submarine.

This hit wasn’t as serious as the first one six months earlier. No one was killed, but one fire room was flooded from the torpedo’s impact. The carrier’s turbo-electric propulsion system was also knocked out for a time and had to be taken under tow by the heavy cruiser Minneapolis for several hours.

This time she returned to the Pearl Harbor Navy yard where her torpedo damage was repaired and she was back at sea in the Eastern Solomon Islands. She provided protection there for Allied forces for the next year. From mid-May 1943 until the end of the month the carrier was involved with the invasion of Bougainville. Carrier planes from the Saratoga struck the Japanese air base at Rabaul putting it out of commission and badly damaging the enemy fleet operating in the area that was poised to counter attack U.S. forces at Bougainville.

After participating in the invasion of the Marshall Islands in late January 1944, the Saratoga was assigned to the Indian Ocean to assist the British Fleet. She participated in this assignment until May 1944 when she returned to Bremerton for an overhaul.

“The ship’s company got its first 30-day leave since it went to war in 1941,” Paulsen said. “I returned to Winamac, Ind. where I grew up. The big thing I noticed right away was that people were being paid good money. The big money was being made by people working in a local ordinance plant. They were getting $3 or $4 an hour. Before I joined the service four years earlier, I was making $1 a day for shucking corn or helping my neighbor milk his cows.”

When he returned to the carrier after his leave and they sailed out of Bremerton Ship Yard, they headed for the South Pacific once again. It was February 1945 when the Saratoga was attacked by kamikazes off Iwo Jima and seriously damaged.

After extensive repairs in Bremerton, the carrier sailed for Pearl Harbor. The war was winding down and she had seen the last of the war zone. When the first atomic bomb was dropped on Hiroshima on Aug. 6, 1945, the Saratoga was off Pearl training pilots.

“As soon as we got the word there would be an unconditional surrender, our orders were to get back to Pearl,” Paulsen said. “We got rid of our airplanes and the whole hangar deck was converted to a bunk room. We were taking thousands of servicemen back to the states aboard the carrier.”

“Everyone was happy on the trip home. My enlistment was up and I was eligible for a discharge immediately,” he said. “A few days after I got into ‘Frisco I was put aboard a train for the Great Lakes Naval Training Center where I enlisted. I was discharged on Sept. 25, 1945, at Great Lakes and returned to Winamac to marry Harriet.”

He was 22. And for most of the next three decades, Fred and Harriet were Indiana farmers.

“When we first started, farming was different back then. We had some cows, hogs and a few chickens. We also raised hay, corn, oats and wheat to feed the animals,” he said. “By the time we quit farming in 1972 I had gotten rid of the animals and was only growing corn, wheat and soybeans on our 220 acres. You had to either get big or get out.”

They moved to Port Charlotte in 1979 where Fred was part owner and operator of a 42-unit villa complex in North Port. Eventually he got out of that and he and his wife concentrated on square dancing. She is also a master gardener.

They had four children. Three of the four were killed in separate automobile accidents. Their remaining son, Bruce, lives in Decatur, Ill., and has two daughters, Portia and Jourdan Grace. Jourdan Grace has a son.

This story was first published in the Charlotte Sun newspaper, Port Charlotte, Fla. on Friday, Feb. 28, 2003 and is republished with permission.