McClendon was an engineer aboard the destroyer USS Jenks that captured the German submarine U-505 off the coast of Africa. Photo provided

Jack McClinden was aboard the USS Jenks, one of the five destroyers in a hunter-killer pack that captured the German submarine U-505 off the African coast in June 1944. It was the first time a U.S. vessel had captured an enemy ship at sea since the 19th Century.

“It was the depth of the depression and jobs were hard to find,” he said. “Me and my buddy went down to the Naval recruiting station to sign up. They rejected him and took me.”

When the Japanese bombed Pearl Harbor on Dec. 7, 1941, McClinden was a seasoned sailor with five years experience aboard Navy ships. By war’s end, he had served in 10 ships during the 10 years he was in the service.

It was the summer of 1944 and McClinden was stationed in Fort Lauderdale, Fla., waiting for a new destroyer to take him to sea when he received word to report to the USS Jenks (DD-665) in Norfolk, Va.

What he didn’t know at the time was that the Jenks was part of a five-destroyer hunter-killer group sent out to find and sink German submarines. The unit was led by Capt. Daniel Gallery, skipper of the escort carrier Guadalcanal and five destroyers: USS Pillsbury, USS Pope, USS Flaherty, USS Chatelain and the USS Jenks.

“Gallery had an idea his group could capture a German submarine by dropping depth charges underneath it and blowing it to the surface. He persuaded the Navy department to let him try although they didn’t believe it could be done,” McClinden recalled.

On May 15, 1944, the anti-submarine patrol left Norfolk and sailed across the Atlantic headed for the Canary Islands searching for enemy submarines.

“At high noon on June 4, 1944, our hunter-killer pack was cruising off the African coast when the Chatelain spotted an enemy sub on its sonar,” he said. “They fired their depth charges right over top of it and the submarine popped up right along side of the Jenks.

“Not wanting to miss out on the action, the commander of the five submarines, who was in the Pillsbury leading the V-formation escorting the carrier, made a quick turn and pulled his ship right between the Jenks (on the far right side of the formation) and the German sub.”

By this time a couple of Wildcat fighter planes flew off the deck of the Guadalcanal and strafed the general area near the disabled enemy submarine making sure not to hit the German crew or the sub. By this time, all but one member of the submarine who had bailed out were in lifeboats while the U-505 circled the area at 7 knots with a jammed rudder. The German gunner’s mate had been killed in the initial encounter

“The Jenks had already fired five rounds of 3-inch shells from the destroyer’s main guns into the conning tower of the German submarine. One of those shells killed the gunner’s mate,” McCLinden said.

The sailors aboard the Jenks were at their battle stations, which meant McClinden was in the engine room because he was an electrician’s mate at the time. He had originally been assigned to head the boarding party that would take possession of the U-505.

Because the USS Pillsbury cut in between the Jenks and the sub, it sent its own boarding party, headed by Lt. J.G. Albert David and eight other sailors. The lieutenant would later receive the Medal of Honor for his efforts.

The Jenks’ whaleboat was sent to help rescue the German sailors. 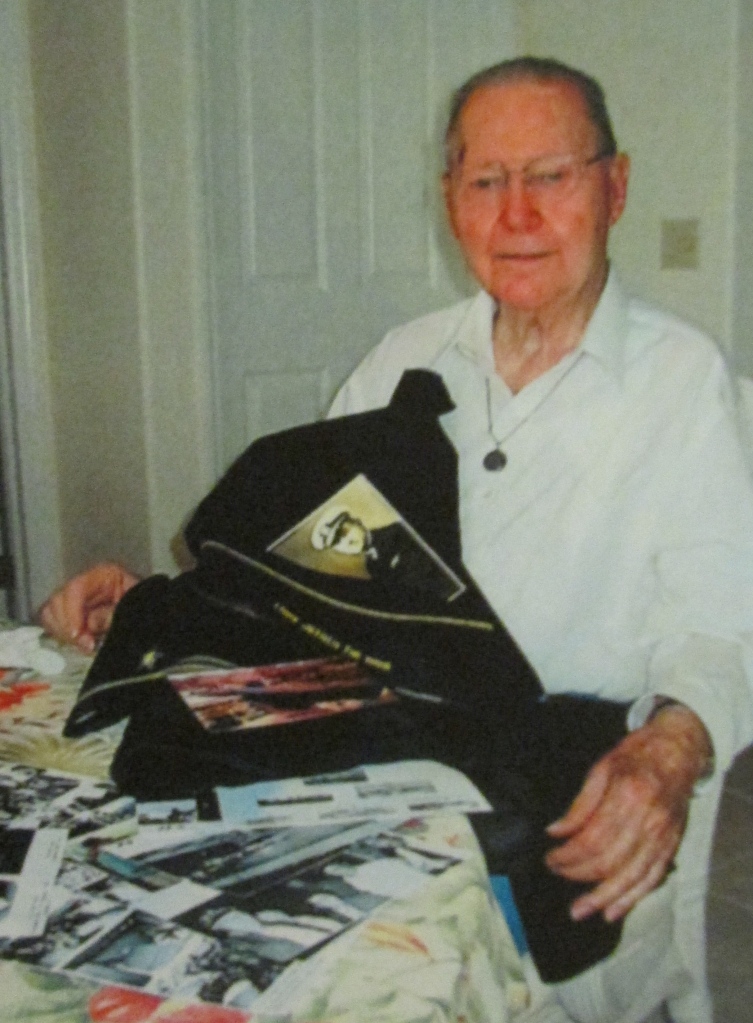 Jack McClinden served aboard the USS Jenks, one of five destroyers in a hunter-killer pack that captured the German submarine U-505 and with it the ultra secret “Enigma” code machine. He was staying at his daughter’s home in Burn Store Lakes. Sun photo by Don Moore

“Our boat came back with 15 German sailors and the executive officer of the submarine,” he said. “Odd things happen at a time like this. An American sailor was in the bow of the whaleboat with a rifle. When he climbed back aboard the Jenks, he left his rifle in the whaleboat filled with German prisoners.

“One of the German prisoners reached over, picked up the rifle by its barrel and handed it to somebody on the deck of the destroyer. In most cases it would have been a suicidal action, but in this case everybody just laughed.

“In a small ship like the Jenks there was no room for prisoners. So we just distributed the German enlisted men among the crew and they slept and ate with us,” McClinden said. The executive officer of the German submarine spoke better English than I did. He shared a room with one of our officers and ate in the officers’ mess.”

The U-505 was taken under tow by the Guadalcanal, but the carrier wasn’t capable of towing the damaged enemy sub all the way across the Atlantic. About sundown, the tow cable snapped and the submarine sank to neutral buoyancy some 30 feet below the surface.

“The Jenks was nearby when the submarine went down. We could see her outline below us. As we sat there under a brilliant full moon, we were ordered to keep the enemy sub company the remainder of the night while the rest of our group sailed off. We sat there all night waiting for the enemy torpedo that never arrived,” McClinden said.

A tug and a fuel tanker showed up the next morning. They sent divers down and attached another line to the U-505. As the tug began to haul away the German submarine, it popped to the surface once more.

“At that point we had a chance to go aboard the submarine and investigate her contents. That’s when we found the German (Enigma) code machine and the code books. We brought all the intelligence material aboard the Jenks.

“Our destroyer received word to proceed to Bermuda at maximum speed with the German intelligence material. When we reached the harbor at Hamilton, Bermuda, we were met by a flying boat that took the enemy code machine and the secret documents and flew them directly to Washington,” he said.

McClinden and his shipmates realized they must have found something of critical importance to the Allied war effort aboard the U-505 when they weren’t allowed to go ashore. The destroyer sailed for Long Island Sound, but again no one was allowed shore leave.

The crew spent the next six weeks at sea playing war games with a new American submarine off the Atlantic coast of the United States. Before McClinden finally returned home to his wife in Fort Lauderdale, he was sworn to secrecy.

“The day after the war ended my wife, June, my landlady and I went to dinner. I could finally tell her all about the missing six weeks that I was at sea. She never forgave me for telling others before I told her,” the old sailor said with just the hint of a smile. 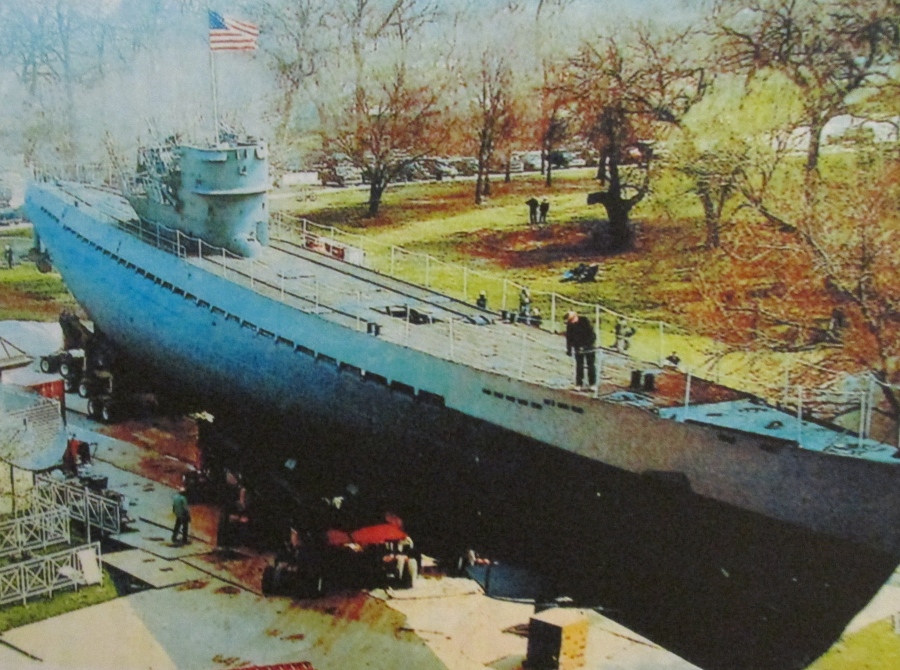 After its capture by a US destroyer the U-505 was secretly taken to the Bahamas with its precious Enigma machine. After the war in 1946 the German sub was given to the Chicago Museum of Science and Industry where it has been on display for the past 70 years. Photo courtesy of US Navy

The German submarine U-505 was donated by the U.S. Government to the Chicago Museum of Science and Industry in 1954 through the efforts of Adm. Daniel Gallery and the Rev. John Gallery, with the help of Julius Rosenwald, a Chicago businessman.

U-505 was dedicated as a war memorial and permanent exhibit that same year. In 1989 the German submarine, the only IX-C class sub in existence, was designated a National Historic Landmark.

This story was first published in the Charlotte Sun newspaper, Port Charlotte, Fla. on Tuesday, Nov. 22, 2005 and is republished with permission.