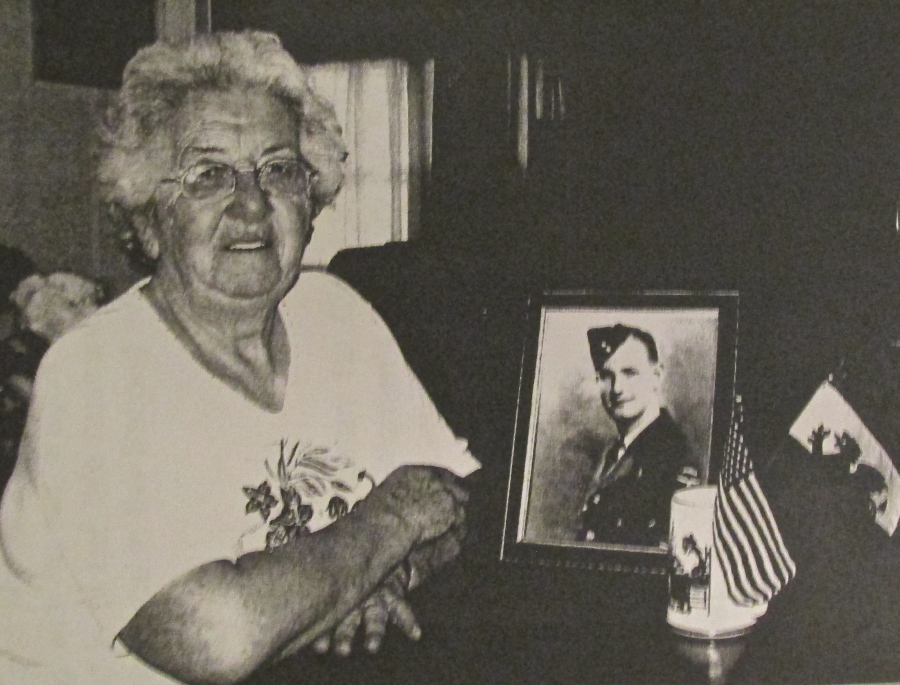 Elizabeth Adams of Harbor Cove in North Port was a WAAF in World War II. She installed radar in British Halifax bombers. She became an American citizen some years ago and keeps the small American flag to reminder her of the occasion. The Welsh flag with its red dragon reminds her of her homeland. The picture is of her late husband, Wing Cmdr. Allan Adams, a member of the Royal Canadian Air Force in the Second World War. Sun photo by Don Moore

Elizabeth Adams of Harbor Cove in North Port was a WAAF in World War II. She installed radar in British Halifax bombers. She became an American citizen some years ago and keeps the small American flag to reminder her of the occasion. The Welsh flag with its red dragon reminds her of her homeland. The picture is of her late husband, Wing Cmdr. Allan Adams, a member of the Royal Canadian Air Force in the Second World War. Sun photo by Don Moore

Adams became a member of the WAAFs — Women’s Auxiliary Air Force — attached to the Royal Air Force shortly after she graduated from high school in Wales in 1941.

“I was a radar mechanic. I was in the WAAFs and among the first class of women trained as radar mechanics,” she recalled. “Shortly after we arrived at our first post we staged a little uprising because we were doing men’s work but weren’t being given men’s pay.

“The men were getting 10 shillings a week — about $5 dollars American. The girls were getting about $1 a week for doing the same work,” Adams said. “After I finished mechanics training, they said I was worth more so they paid me equal to the men.”

She took her basic training at a seaside resort town along the northwest coast of England across the Irish Sea from Ireland. The WAAFs’ training operation took over much of the town. They were billeted in the resort’s hotels.

“We were drilling on the promenade along the town’s seafront while two elderly ladies were sitting there looking at the sea. They attacked our corporal (a man), who was drilling us with the umbrellas,” she said and laughed.

“‘You don ‘t talk to young ladies like that,’ they told him. After that, we paraded on the pier away from the elderly ladies.”

In the early years of World War II, England was clinging to its existence with determination and little else. She did not surrender in the face of the Nazi onslaught because of the unfaltering leadership, particularly Prime Minister Winston Churchill’s, who vowed to fight the enemy on the beach and in the woods and never give up — NEVER!

“I remember my mother had some very nice aluminum cooking pots, new ones. The government wanted people to give up their aluminum pots so they could melt the aluminum down for airplanes,” Adams said. “My mother gave up her lovely pots.”

Every Englishman and woman, no matter their station, was required to perform some service in support of the war effort. It could be military or otherwise. Adams joined the WAAFs shortly after graduating from high school because she wanted to go into radar.

After completing basic she became a land radar operator based in Cornwell, along the southwest coast of England.

“I reported an enemy action off the coast shortly after arriving, but was told ‘That can’t be,'” by her superiors. “Several days later, we heard that two German battleships had escaped from the port of Brest in Nazi-occupied France. That’s what I spotted. Eventually I learned we couldn’t afford to send naval vessels to intercept the enemy battleships.”

While training to install and repair radar units on British Halifax four-engine bombers at a base in Cranwell in Lincolnshire, her unit received word King Edward VI would pay them a visit.

“For two weeks, we polished floors and cleaned everything in preparation for the King’s visit,” she said. “Afterwards, we read in the newspaper that King Edward had made a ‘surprise visit to Cranwell.’ We thought that was funny because we had been preparing for his visit for two weeks. We understood he was very impressed with our efforts.”

Adams said that during WW II, the women of England played a major role in the defeat of Hitler’s Germany. They did almost everything the men did except fight the enemy on the battlefield.

“I met my late husband, Allan, at a Royal Air Force base just south of York. He had requested 40 radar technicians immediately. Allan got 39 men and me,” she chuckled. “He wasn’t going to take a woman, but he was so desperate for radar technicians he decided he would.”

He was a wing commander in charge of the radar for three squadrons of Halifax bombers flying out of the base near York. It was his responsibility to see that the four-engine bombers’ radar units were working when they were airborne.”

Ninety days after the woman radar tech showed up at his base, he was dating the young radar technician.

“The next year, 1944, we got married at my little church in Llandrindod Wells, Wales, by a Canadian padre,” she said. “Allan and I were married 47 years. He was a Canadian who was born in Montreal, Canada. He was a member of the Royal Canadian Air Force when he went to Europe during the war.

“While in Yorkshire, we were attacked by German buzz bombs. They were flying bombs that made an awful noise while flying. When they stopped making the noise, you knew you might be in trouble (because they had run out of fuel and were about to explode when they hit the ground),” Adams said. “One buzz bomb stopped while flying over us. We grabbed our gas masks, our tin helmets and took shelter under our beds. It didn’t come near us. It hit somewhere on the airfield.”

By VE-Day (Victory in Europe-Day), Leading Air Craft Woman First Class Elizabeth Adams was back home in Llandrindod Wells, Wales, at her parents’ house on maternity leave about to have her first baby.

“She was born on Aug. 15, 1945, VJ-Day (Victory over Japan-Day). The doctor wanted me to call her Victoria Jane, but I wouldn’t. The doctor said, ‘You know I had a baby boy born on VE-Day and the mother wouldn’t name him Victor Edward either.'”

Elizabeth Adams called her firstborn daughter Elizabeth Susan Adams. Now the younger Elizabeth has two children of her own. She and her family live in Western Canada. Elizabeth senior has three more children, eight grandchildren and two great-grandchildren.

Allan lived into his 80s and died in 1991. By then, he had retired as a senior vice-president at Kellogg cereal company in Battle Creek, Mich. The couple moved to this area in 1983.

This story was first published in the Charlotte Sun newspaper, Port Charlotte, Fla. on Tuesday, November 16, 2004 and is republished with permission.