For more than three decades Col. Jeff Ponkratz of Punta Gorda Isles, Fla. served as an Army Reservist in the 432nd Civil Affairs Battalion based in Green Bay, Wis. His job in the military was one of rebuilding and preserving what was left of the half dozen war-torn countries he served in during the U.S.’s various military engagements beginning in 1990 in Iraq with “Operation Desert Storm.”
When he wasn’t soldering the 55-year-old was a middle-school teacher in Green Bay. He taught American Government, History and Economics. In 2007 Ponkratz was named “Distinguished Social Studies Teacher of the Year” in Wisconsin.

He credits the U.S. Army with giving him direction in life. It pretty much made him what he is today.

“I wasn’t much of a student in high school. I graduated near the bottom of my class. In 1977 I joined the Army because it was my only option,” Ponkratz explained.

“After serving three years as an M.P. in Germany I got out, took the G.I. Bill and attended the University of Wisconsin at Green Bay. I graduated with a teaching diploma and as a 2nd lieutenant in the Army Reserve.”

“We took over civilian government in Iraq. We ran refugee camps in Kuwait and did other things in other places,” he said. “I went right into Kuwait City with the invading forces in 1990. When we arrived we found Saddam Hussein’s troops had stolen almost everything.

In a few months Ponkratz and his men had the schools in Kuwait City up and running again.

“After we completed this school rebuilding job we expected to come home. Then Hussein set all the oil wells in Kuwait on fire. Some days it was so dark we couldn’t see anything because of the oil well fires.

“Right after that, Saddam attacked the Kurds in northern Iraq (because they were from a different tribe). He obliterated a third of the population in his country.

“Our 432nd Civil Affairs Battalion flew into Turkey, was completely reequipped and drove across the border into the Kurdish part of northern Iraq,” he said. “We began by air-dropping pallets of food, water and essentials to the Kurds.

“We ended up establishing three refugee camps in a farmer’s wheat field in Northern Iraq capable of holding 20,000 refugees each. These camps were turned over to the United Nations to run when we headed home to the U.S.

“When our unit got back to Green Bay in 1991 the town was holding a Fourth of July Parade. We, together with some Vietnam vets, were the main attraction,” he recalled.

“It was one of the most moving experiences of my life. The 432nd marched down the town’s main drag as people stood eight-deep on both sides of the curb.” Sousa’s “Stars and Stripes Forever” was blaring from a loud speaker as the soldiers trooped by.

“A Boy Scout carried an American flag marching ahead of our battalion. In a wheelchair along the curb was a World War II veteran. He spotted the Scout carrying the flag coming down the street in front of him. He tried to stand, but had to be helped by his wife.

“As this old soldier stood as best he could to honor the flag of his country he placed his right hand over his heart. When he did there wasn’t a dry eye in the house.

“It was at that point all of us who were marching in formation that day in Green Bay knew we were veterans. We were part of an elite group of individuals.

“Because of the ‘Dayton Agreement’ in 1996 our civil affairs unit was sent to Bosnia. The Soviet Union was defunct and the various countries in the old union were breaking away. For four years the Serbs, Bosnians and Croatians were killing each other.

“I remember my two young sons were watching what was going on with refugees over there. They knew my job in the Army was taking care of refugees. ‘Why don’t you help them daddy?’ they inquired.

“I did. I was sent, with the 432nd, to Olovo along with the 1st Armored Division. There was almost nothing left of Olovo that was trying to break away from Serbia. It had been shelled repeatedly. When we arrived in January of 1996 we offered essential services to the town. We left in July of that year having done our job.

“Three years later my unit and I were in Kosovo. There was Greece, Macedonia and Kosovo. It too wanted to break away from Serbia.

“I was among the first Americans in Kosovo. I was sent there to do strategic planning. My job was to coordinate all the assets the Department of Defense had in the area. When I came back from Kosovo in 1999 I was a major.

“In 2003 I went to Iraq as part of ‘Operation Iraqi Freedom.’ We were there for a year, from 2003 to 2004. While there I met both president Bush senior and junior. I also had breakfast with Vice President Dick Cheney.

“Our civil affairs unit was assigned to the 1st Armored Division in Iraq. We set up shop in Hillah which is in Babylon along the Euphrates River. We were in charge of all civil affairs south of Baghdad.

“In Hillah I slept in Saddam Hussein’s bedroom in his 150 room palace that set atop a man-made hill. My job was to keep the general in charge abreast of what we were doing out in the field.

“During the first six months we were in Iraq we didn’t have a single attack on Americans. That all changed during the next six months when we moved into the ‘Suni Triangle.’ We had nothing but attacks and problems. Every single day we were getting blown up,’ Ponkratz said.

“The 432nd hooked up with the 82nd Airborne Division in Ramadi. Our unit was responsible for all the civil affairs in Al Ambar Province in Iraq.

“Before we arrived the Sunis had it good because they were in charge. When we showed up we screwed up everything for them. We put the Shah in charge which didn’t work well.

“For the average Iraqi it’s ‘survival of the fittest!’ There’s no sense of civic virtue or looking out for the common good,” he said. “That’s what separates the people in America from the people over there. Back home teachers, doctors and firemen share so much of their talent with the whole community.”

So how did you get two Purple Hearts?

The major’s Humvee was a disaster after it was hit by an “Improvised Explosive Device” on a highway outside Fallujah, Iraq on Jan. 29 2004. He suffered traumatic brain injury and nerve injury to his ear. Photo provided

“I was blown up by ‘Improvised Explosive Devices’ in my Humvee on two occasions while on missions outside of Fallujah, Iraq. “The first time wasn’t much. My ear drum was blown out and I was bleeding from my right ear. The second IED explosion was much worse.

“We were driving down the interstate outside Fallujah. I was in the lead vehicle when I spotted three 155 millimeter artillery shells along the side of the highway. The IED was fired by somebody close by watching us.

“I remember my driver saying, ‘I can’t control the vehicle!’ All four of our tires blew as the Humvee flew off the highway and rolled over several times in the desert landing upside down in the sand.

“Our gunner, a woman soldier, in the back was thrown from the vehicle and pinned under the Humvee when it stopped rolling. I was upside down held by my seatbelt as gasoline poured over me. I was out from the blast bleeding from shrapnel wounds to my jaw and right shoulder.

“When I woke up a few minutes later, two ‘Blackhawk’ helicopters, with American flags on their side, had just landed. They flew us to Saddam Hussein’s hospital in Baghdad where we spent five days recovering.”

The whole time Ponkratz was stationed at a base outside Fallujah, a little Iraqi girl stood at the main gate to his camp and greeted him as he came and went on missions. She missed seeing him while he was in the Baghdad hospital. 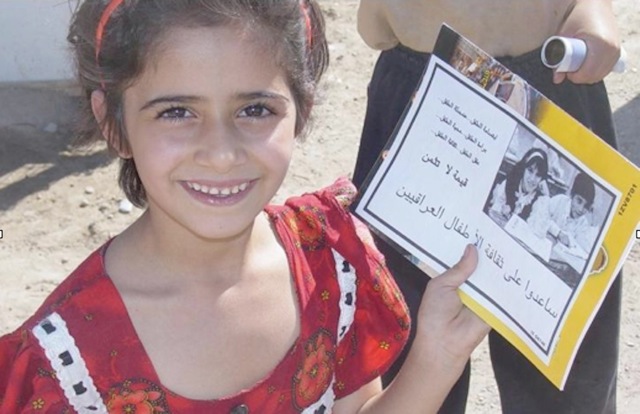 The young Iraqi girl is all smiles as she shows off her first report cad with all As. For the first time in her life she was atending a school which Ponkratz and the soldiers of the 432nd Civil Affairs Battalion buil in the Falluah area. Photo provided

“She was standing there at the gate when I returned from the hospital. She started crying when she saw me all bandaged up from the IED explosion. She had been looking for me because she wanted to show me her first report card that had straight A-s.”

A few months earlier he stopped his Humvee at the gate and asked her why she wan’t in school?” “Girls don’t go to school,'” she told him.

After contacting the parents of a number of school age girls in the Fallujah area, the 432nd built a school for them. Maj. Ponkratz was on his way to deliver supplies to the girls’ new school when he was almost killed by the IED.

“After my latest IED injury I was thinking bad thoughts about the people of Iraq. They had been fighting among themselves for thousands of years. As far as I was concerned they could keep fighting. We weren’t going to change anything over there I thought. I wanted to go home to my family.

“Then I saw her report card and her smiling face. She was so happy. She made everything the 432nd was doing in Iraq alright.”

When he returned to the U.S. in 2004 he told the story about the little girl and her report card to a U.S. congressman. The Washington politician retold it to President George W. Bush.

President George W. Bush is checking out Ponkratz’s jaw that was injured in the IED explosion in Iraq. They met in a Green Bay, Wis. hotel room while he was campaigning. Photo provided

“A few weeks later I got a call from the congressman. He said, ‘The president would like to meet with you.’ I met the president in a hotel room in Green Bay. I gave him a DVD I put together showing all the good things the 432nd had done for the people of Iraq.”

By the time Ponkratz returned from Iraq he was a lieutenant colonel in the Army’s Civil Affairs. He would return to Iraq once more in 2007 to take part in ‘The Surge.’

He worked with the 1st Armored Division over there on that deployment. He was in charge of all the civil affairs activities in the military north of Bagdad.

He returned to the states and commanded the 431st Civil Affairs Battalion stationed in Little Rock, Ark. He drove 900 miles from his home in Green Bay to Little Rock one weekend a month for a year to run that unit.

After that he became a strategic planner with Central Command, “CentCom,” at Mac Dill Air Force Base in Tampa for another year. He moved on and became a civil affairs liaison officer in Washington. Ponkratz sure civil affairs activities were written into the Department of Defense’s war plans.

It was at this point he injured his knee while doing Army calisthenics. A short while after that he suffered a blood clot in his lung.

“My military career ended on Dec. 20, 2014 as a result of all my injuries,” Ponkratz said. “I put almost 35 years in the Army Reserve when I wasn’t teaching school in Green Bay.”

He retired. He and his wife, Sandra, moved to PGI this past Thanksgiving. The couple has three grown children: Benjamin, Jacob and Allie.

This story was first published in the Charlotte Sun newspaper, Port Charlotte, Fla. on Monday, February 2, 2015 and is republished with permission.