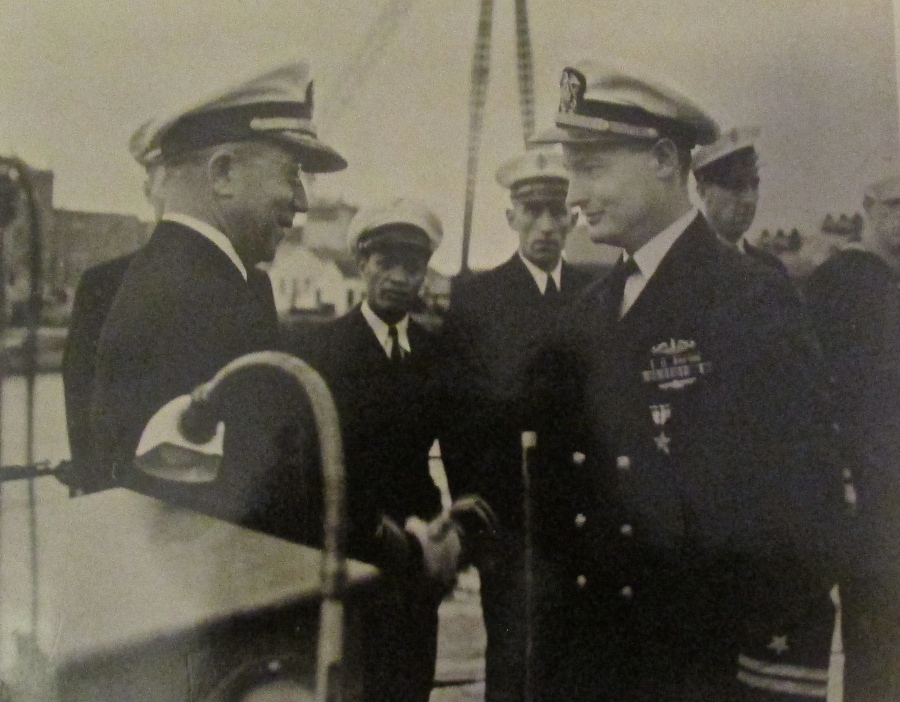 Lt. Bob Erwin (right) of North Port receives the Silver Star from the skipper of his submarine, USS Parche (SS-384), for one of the five combat patrols he made into the Pacific during World War II. Photo provided

Lt. Bob Erwin (right) of North Port, Fla. receives the Silver Star from the skipper of his submarine, USS Parche (SS-384), for one of the five combat patrols he made into the covbat zone in the Pacific during World War II. Photo provided

Bob Erwin of North Port Pines Retirement Center made five patrols aboard the USS Parche (SS-384) into Japanese-held waters during World War II. On one of these patrols his skipper, Cmdr. Lawson Ramage, received the Medal of Honor and Erwin was awarded the Silver Star for their exploits.

“After officers’ boot camp at Notre Dame I volunteered for submarines, attended sub school for a few months and went aboard the Parche in October 1943 at Portsmouth, N.H. where she was commissioned,” the 96-year-old former Navy man explained.

“What was your most interesting combat patrol?” Erwin was asked.

“Our second patrol where our skipper got the Medal of Honor. “We sailed out of Pearl Harbor and had a little excitement before we reached the war zone. We sank a Japanese patrol boat in the Philippine Straights on the way out. We caught the 100-foot-long boat while we were on the surface and sank it with our three-inch deck gun.

It was May 1944 when the Parche sailed out of Pearl. She formed an attack group with USS Hammerhead and USS Steelhead. The three subs headed for the South China Sea, between Japan and China, in search of enemy ships.

“We spent weeks out there searching but came up with nothing until almost the end of our four-week patrol. We were almost ready to go home when we ran into a large Japanese convoy,” Erwin said. “The Hammerhead found the convoy first and relayed the information to us. We spent the next day chasing it and finally caught up to the convoy at midnight the following day.

“Ahead of us we could see the string of ships and a Japanese destroyer protecting them. As the destroyer turned toward us the convoy changed its direction.

“We were on the surface and visibility was good. We ended up right in the middle of the Japanese ships. That’s when we started shooting our torpedoes. In less than 30 minutes we fired 19 torpedoes. We had 15 hits out of 19 shots.

“We believe we sank five ships, but we only got credit for sinking 2 1/2 ships. Altogether that night our three subs sank a total of six cargo ships.

“We would have sunk more ships, but one of our torpedo tubes jammed and we returned to port with five unused torpedoes. Although the Japanese destroyer fired at us we weren’t hit. We just sailed off into the night still on the surface without a scratch,” he said.

Erwin believes one reason Cmdr. Ramage received the Medal of Honor is because their task force commander was aboard the Parche during the engagement. He was the one who put the skipper’s name in for this nation’s highest military honor.

Life aboard the submarine wasn’t always as exciting as the 30 minutes of adveture the crew experienced on its second outing. At times there was sorrow and other times terror.

“We lost three people overboard on one of our return trips. They were on deck working on stuff on the bow when they were washed over the side and lost at sea,” he said. “We also went through three typhoons which weren’t much fun.

“Our first war patrol was in the South China Sea. For most of the four weeks patrolling we found nothing until we ran into seven ore boats. Our three subs sank six of the seven boats,” Erwin recalled.

“We were sent to the eastern side of the Philippines on our third patrol. We spent 2 1/2 weeks waiting for the Japanese fleet to arrive, prior to the Battle of the Coral Sea. It never showed up and we returned to port bored.

“On our fourth patrol we went out on our own and sank one ship off the Japanese main islands. Because I was involved in that sinking the skipper allowed me to see the boat I had help sink. That was kind of a thrill,” he said almost 70 years later.

“Before we reached home the skipper took our sub into a Japanese harbor and put torpedoes into two ships moored there. It was a scary thing for us to do, but we escaped.

“On our fifth and last patrol, we sank a couple of small ships off the coast of Japan. By the time we sailed for Midway we had used up all 24 of our torpedoes.”

The Parche arrived back in port on April 30, 1945. Erwin had enough points to sail for the States. 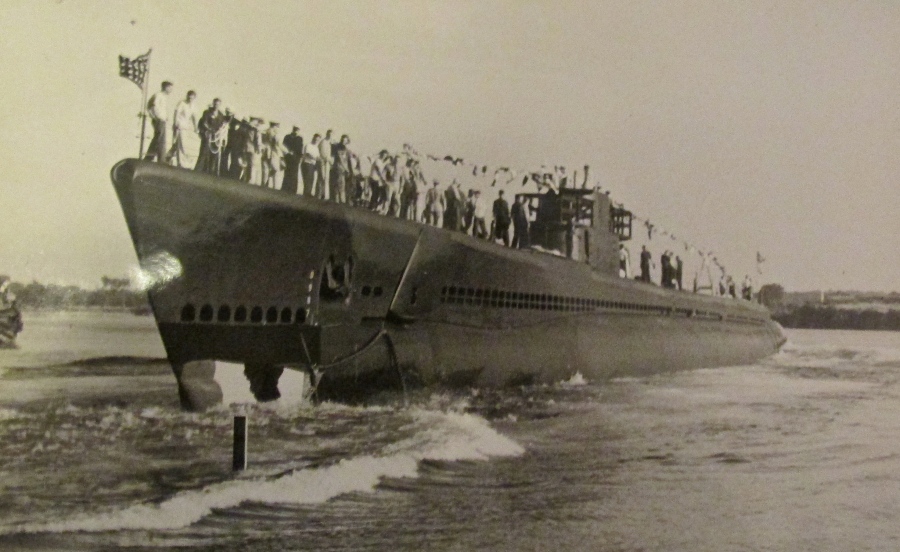 The USS Parche slides down the ways at Portsmouth Naval Shipyard where she was built in 1943. She was one of the most decorated submarines in the Second World War. Photo provided

“I was home on leave when they dropped the Atomic Bomb on Japan,” he said. “I was in Buffalo, N.Y. On VJ-Day (Victory over Japan) I was on my way to Portsmouth to pick up my new boat. Six months after the war was over I was discharged from the Navy.”

He got a job working as a design engineer for Ford Motor Co. that he retired from in 1980. Erwin and his wife, Mary, moved to Florida in 2002. They have five daughters: Sandy, Nina, Carol, Mary Lou and Betty Jane.

Commander Ramage’s Medal of Honor citation
For conspicuous gallantry and intrepidity at the risk of his life above and beyond the call of duty as commanding officer of the U.S.S. Parche in a predawn attack on a Japanese convoy, 31 July 1944. Boldly penetrating the screen of a heavily escorted convoy, Comdr. Ramage launched a perilous surface attack by delivering a crippling stern shot into a freighter and quickly following up with a series of bow and stern torpedoes to sink the leading tanker and damage the second one. Exposed by the light of bursting flares and bravely defiant of terrific shellfire passing close overhead, he struck again, sinking a transport by two forward reloads. In the mounting fury of fire from the damaged and sinking tanker, he calmly ordered his men below, remaining on the bridge to fight it out with an enemy now disorganized and confused. Swift to act as a fast transport closed in to ram, Comdr. Ramage daringly swung the stern of the speeding Parche as she crossed the bow of the onrushing ship, clearing by less than 50 feet but placing his submarine in a deadly crossfire from escorts on all sides and with the transport dead ahead. Undaunted, he sent 3 smashing “down the throat” bow shots to stop the target, then scored a killing hit as a climax to 46 minutes of violent action with the Parche and her valiant fighting company retiring victorious and unscathed.

Following the presentation, Commander Ramage created a certificate for each sailor in his command. The certificate read:

The Captain wishes to emphasize the fact that the Medal of Honor was accepted from the President of the United States as the Nation’s tribute to a fighting ship and her courageous crew. He feels that every officer and man whose loyal cooperation and able assistance contributed to the success of the “Parche” has an equal share in this award which he holds in trust for you. With great pride and respect.
Sincerely, L. P. Ramage

This story was first published in the Charlotte Sun newspaper, Port Charlotte, Fla. on Monday, Dec. 29, 2014 and is republished with permission.

Click here for his collection in the Library of Congress.

*Robert Lee Erwin, 98, of North Port, passed away Feb. 3. He was the oldest of 8 children born on a farm in Jackson, Ohio.
Bob graduated from Ohio State University in the spring of 1942 and joined the Navy. He served on the submarines USS Parche and USS Ramora for 6 patrols in the Pacific earning bronze and silver stars. After the war he began a fruitful career with Ford while he and his wife Mary raised a family of five wonderful, challenging daughters.
After retiring in 1982, Bob and Mary traveled extensively and enjoyed watching their grandchildren and great-grandchildren grow up. They moved to Florida so Bob could enjoy golf year-round.
He is preceded in death by his wife of 68 years, Mary, daughter Karen Ryan, sisters Eleanor Smith, Kathleen Dempsy, Charlene McClellan and brother Dick Erwin. He is survived by Sandy Anderson (Bill) of Billings, MT, Nina McMillan (Dugald) of E Lansing, MI, son-in-law John Ryan of Venice, FL, Mary Lou Erwin of North Port and Betty Jane Hoade (Marty) of N. Ft. Myers, FL, sisters Louise Richards (Dale) of Thurman, OH, Carolyn Lewis of Oak Hill, OH and Marge Ervin of Jackson, OH.
Bob will be interred in Sarasota National Cemetery in early June.
In lieu of flowers, a donation to Tidewell Hospice or a charity of your choice

would be appreciated. Farley Funeral Home in North Port is handling the arrangements.
To send a condolence or to share a memory of Robert please visit www.farleyfuneralhome.com.