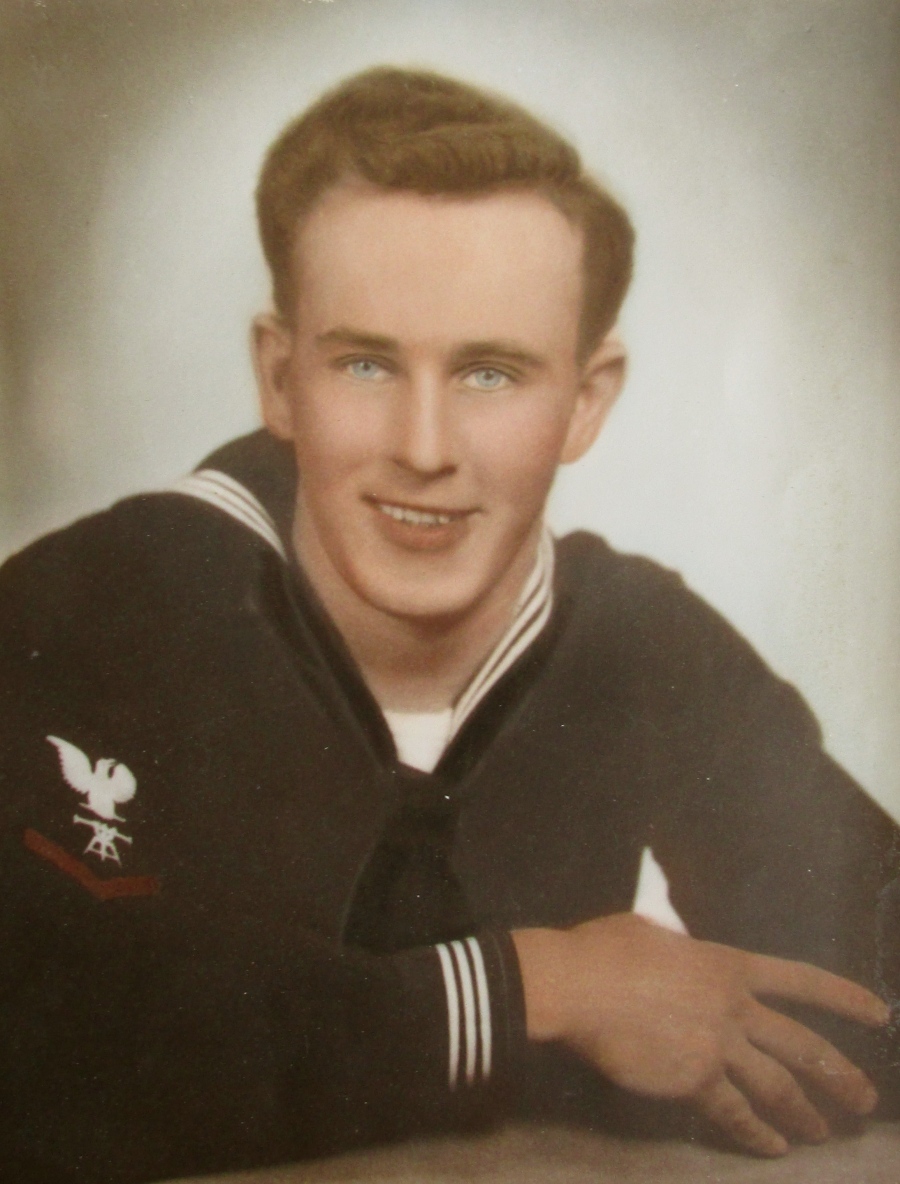 Fireman 3rd Class Bill Hallo of North Port shortly after he went aboard the battleship USS South Dakota in the Pacific during World War II. He fired the main stern guns on the ship. Photo provided

Bill Hallo of North Port, Fla. fired the 16-inch main guns on the stern of the battleship USS South Dakota in some of the major battles in the Pacific during World War II. He was aboard ship firing away at the enemy at: Guam, Saipan, Tenian, New Guinea, Philippines, Luzon, Formosa, Iwo Jima, Okinawa and Japan.

The South Dakota was Fleet Adm. “Bull” Halsey’s flagship and Hallo was the admiral’s favorite sailor aboard ship, or so he recalls almost 70 years later. Just by happenstance the young swabbie became his boy.

Hallo was a guard on the admiral’s deck on the South Dakota. It was the deck above the commanding captain’s.

“There was a bunch of officers on the deck when I arrived. After taking a look at me they started talking among themselves about my age.

“‘He must have run away from home and joined the Navy,’ one said. ‘He doesn’t look like he’s much more than 12 years old.’

“The next day I was back up there guarding Halsey’s deck and the officers were still talking about me when Halsey walked up. He took a look at me and said, ‘I was the cleanest sailor he had ever seen.’ Then he added, ‘If I had a son I would like him to be just like you.’

“After that they called me, ‘Halsey’s son.’ The admiral ordered the officers to take care of me. That’s when they switched me into the Director. I fired the main stern guns on the battleship from there.”

The Director was an armored box with three-inch protective steel sides. It also contained the ship’s radar. The Director was 30 or 40 feet away from the main stern gun turrets.

Hallo went aboard the South Dakota at Pearl Harbor in May 1944 and sailed for Guam and the war zone.

“Guam is where the Japanese told the civilians, if the Americans captured them they would cut their tongues out and gouge out their eyes. Whole families jumped off 100 foot cliffs into the sea to escape being captured,” the old sailor recalled decades later.

“From Guam we sailed for Saipan. The South Dakota helped out the Marines who were trying to capture the island by knocking out Japanese gun emplacements just off the beach,” he said. “We came in close to shore at Saipan hitting map coordinates called in by Marines.

In mid June of 1944 the South Dakota played a part in the Battle of the Philippine Sea. It was here the Japanese dropped a 500 pound bomb in the center of the ship’s main deck, killing or wounding 50 sailors. The battleship kept fighting despite the severe damage from the enemy bomb.

“We got hit during an attack by 30 or 40 enemy planes. They weren’t aiming at us, they were aiming at a carrier a half mile away,” Hallo recalled. “I could see the bomb coming and I knew it was going to hit us. At the time I was on the main deck and hid behind the Number-2, 16-inch main turret.”

American losses totaled 123 planes and the wounded and killed in the bombing of the South Dakota. She was the only American ship that sustained major damage during the battle.

“At Luzon we saw MacArthur come ashore,” Hallo said. “He let the Marines go in first and then when most of the shooting stopped he walked in.”

That wasn’t the case at Iwo Jima when the American flag went up atop Mount Suribachi.

“I was sitting in the Director watching the Marines put up the first flag in the morning. When It went up the ships off the beach were tooting their horns and whistles,” Hallo said. “Then later in the afternoon they put up the bigger American flag on Suribahi. We saw that, too.”

The battleship USS South Dakota played a major roll in many of the historic battles of the Second World War. Bill Hallo was aboard ship at Iwo Jima, Okinawa and the attack on the main Japanese islands. Photo provided.

Adm. Halsey and the fleet moved on to the biggest Pacific battle of World War II–Okinawa.

“The battle began April 1, 1945, Easter Sunday, ‘April Fools Day.’ I remember it well, it was my mother’s birthday,” he said. “It was a beautiful morning.”

Hallo and the South Dakota spent most of the next 82 days bombarding targets on and around Okinawa. Then the battleship and is crew moved on further east.

On July 13 1945 the South Dakota brought all of her main guns to bear on targets on Honahu and Hokkaido, two of the Japanese home islands. The ship’s crew spent the next couple of weeks bombing Japan.

“We were close enough to Hiroshima to see the explosions. It was the same way at Nagasaki when the second bomb went off,” Hallo explained. “We had been bombarding Japan at the time the second atomic bomb exploded. We saw that one too.

“We were off the entrance to Tokyo Bay on Aug. 13, 1945 and were leaving the area when it came over the radio Japan wanted to surrender. Halsey turned the battleship around and sailed back into Tokyo Harbor.

“The next morning Halsey sent 20 Marines ashore each with a Thompson submachine-gun. When the Marines returned they told the admiral the Japanese wanted peace.

“They were going to sign the surrender treaty aboard the South Dakota until the Battleship Missouri showed up the next day. Since Truman was president and he was from Missouri, it was decided the signing would be aboard the Missouri,” he explained.

Hallo and Halsey sailed home aboard the South Dakota. When they reach Long Beach, Calif. the admiral left the battleship for the last time. Hallo will never forget that day.

“When Halsey left the ship for the last time the crew was on deck. They put me at the gangplank. Halsey reached the gangplank where I was. He stopped and turn toward me. He stared at me for five or 10 seconds, then saluted.

“‘Permission to go ashore,’ he said to me.

“‘Permission granted, sir,’ I replied and returned his salute.

“He walked down the gangplank to the waiting boat and sailed away.”

After the war Hallo went to work for Pratt & Whitney, makers of airplane engines. He worked as a machinist for the company in East Hartford, Conn. for the next 39 years.

He and his wife, Anita, have been married 65 years. They moved to North Port in 2000. The couple has two children: Kenneth and Joanne.

This story was first published in the Charlotte Sun newspaper, Port Charlotte, Fla. on Monday, Dec. 8, 2014 and is republished with permission.

Click here to view Hallo’s collection in the Library of Congress.