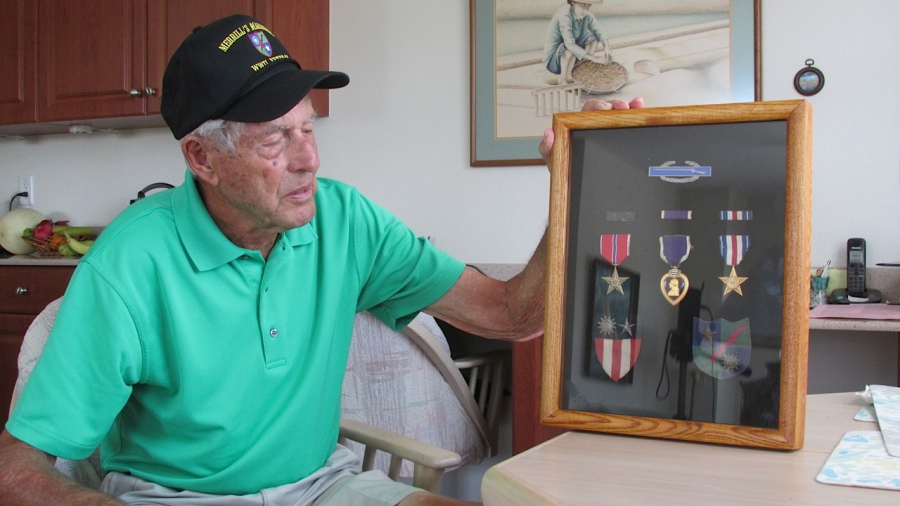 Gerow is shown with a shadowbox of military medals he received while serving in "Merrill's Marauders" during the Second World War. In addition to the Purple Heart he received the Combat Infantryman's Badge, Silver Star and the Bronze Star for valor. His outfit was also awarded the Presidential Unit Citation for the jungle war it fought in Burma against the Japanese. At the bottom is the China, Burma, India shoulder patch and a "Marauders" patch. Sun photo by Don Moore

“Merrill’s Marauders” is what newspaper reporters who covered their exploits a lifetime ago during World War II called them. Officially they were the “5307th Composite Unit Provisional,” a long-range penetration special operations jungle warfare unit that fought the Japanese in the jungles of Burma.

Bud Gerow with his wife, Charlene, live in the Jacaranda Trace apartment complex in South Venice and was a member of this elite fighting force.

The “Marauders,” though vastly outnumbered by the Japanese, fought, starved and died in some of the toughest jungles in the world. They survived enemy bullets and many jungle illness most people have never heard of. With their last ounce of energy on Aug. 10, 1944 they captured the all-weather fighter base at Myitkyina, Burma. This base was used by the enemy to attack Allied shipments of men and war material flown over the Himalayan Mountains, between India and China to supply Allied forces fighting there.

Out of the 2,750 “Marauder” volunteers who marched into the jungle in April 1944 and fought a series of running battles with the Japanese over 750 miles, only two survived unscathed during the five months ordeal. The rest were killed, wounded, hospitalized or died from illness.

Gerow arrived by air as a replacement soldier for one of those who made the five month trek. He spent the first 2 1/2 months with the “Marauders” fighting to take the airbase carved out of the jungle away from a determined enemy.

The consolidated Allied forces in this area consisted of approximately 6,000 gun-toting jungle warriors. They were confronted by two seasoned Japanese divisions–40,000 men.

“When I arrived I was given a British ‘Bren’ light machine gun and put in the 3rd Battalion of the ‘Marauders,” the 89-year-old Venice resident recalled. “The Japanese were dug in deep at Myitkina. On the last day of the fighting we cut the Japs off at the Irrawaddy River. They all committed suicide.

“When we began the fight for Mitkyina our company consisted of 250 soldiers. When we took control of the airport 2 1/2 months later, on Aug. 10, there was 36 men left in our original company,” he said. “I started out in a squad of 12 guys. I was the only one left.

“After that the ‘Marauders’ were disbanded and our new unit Mar’s Task Force set off under (Gen. Joseph) Stilwell once more to take control of ‘The Burma Road.’ Our troops didn’t like Stilwell because he promised us things and never come through with what he promised,” Gerow recalled almost 70 years later.

‘The Burma Road’ was a key link for getting men and equipment from India to China where Allied forces under Chinese Gen. Chiang Kai-shek were fighting the Japanese.

“During the battle to take ‘The Burma Road’ one night two Bengal tigers got in a fight near where we were camping in the bush. After a while they knocked it off and walked away,” he said.

“That night I was pulling guard duty. I looked down and noticed my machine gun was moving away from me on the ground,” Grew said. “I grabbed for the gun and realized a monkey on the other end was trying to make off with it.

“The next morning here came six or seven wild elephants walking up the stream near where we camped. As I started to step over a log on the trail it moved. I looked again and realized it was a 20-foot boa constrictor moseying off through the bushes as we walked on.”

To reach where they needed to be along “The Burma Road,” Gerow and his unit had to cross mountains that reached 5,000 to 6,000 feet and required his company to man-handle the ammunition and equipment over the hills even though they traveled with mules because the path was too steep for the animals.

“I was sent out on patrol to scout this bridge along ‘The Burma Road.’ I was going through this gorge when a Japanese machine gunner opened up on me. He hit me in the leg and chest with his bullets,” he said. “They flew me out of the area in a Piper Cub to a nearby airstrip where a C-47 transport could land. It flew me on to the 20th General Hospital in Ledo Assam, India where I spent the next three weeks recovering from my wounds. I spent an additional four weeks in rehab.”

After Gerow recovered completely he pulled guard duty in New Delhi, India until the end of the war. He returned to the States and was discharged from the Army on Feb. 8, 1946.

He took the G.I. Bill and attended Michigan State University. Four years later he graduated with a degree in chemical engineering. In 1984, when he was 59, Gerow retired after almost 40 years in the business and took up golfing.

He moved to Bradenton from up north in 1984. Eventually the couple moved to the apartment they now have in Venice seven years ago. They have three children: Linda, Nancy and Jeffery.

This story was first published in the Charlotte Sun newspaper, Port Charlotte, Fla. on Monday, Sept. 15, 2014 and is republished with permission.