Sgt. Bob Weiler in his 20s when he flew as a waist-gunner aboard a B-29 bomber out of a base on Guam to bomb Japan during the Second World War. Photo provided

Bob Weiler was the left waist-gunner on a B-29 Superfortress dubbed “Sky Scrapper,” part of the 61th Bomb Squadron, 39th Bomb Group, 314h Bomb Wing of the 20th Air Force, based on Guam in the Mariana Islands bombing Japan late in World War II.

“It was June 1, 1945 and we were on our 14th bombing raid to Osaka, the second largest city in Japan. Flying somewhere around 20,000 feet we were damaged severely by anti-aircraft flak,” the 94-year-old Sarasota resident recalled almost 70 years later.

“Our Number-2 engine, on the inboard lefthand side, caught on fire from enemy ground fire. Then our Number-3 engine, our inboard engine on the right side, threw its prop which came through the lower third of the fuselage.

“Despite the fact our B-29 was severely crippled our pilot and copilot did a tremendous job keeping us in the air until we could get far enough out to sea to parachute and be picked up by an American submarine,” Weiler said. “The entire crew, all 11 of us, bailed out and landed in the sea near a small island called Sofugan. The English translation of the island’s name from out of the Bible: ‘Lot’s Wife.’

“Late in the afternoon, while we were still floating around in the water, a B-17 bomber flew over and dropped us a lifeboat. Ten of us crawled aboard the rescue craft. The 11th crewman, the the flight engineer, was lost at sea.

“The next morning we were picked up by the USS Tinosa, (SS-283), an American submarine on patrol in the waters off Japan. “The sub surfaced and we paddled over to it in our lifeboat. We climbed aboard and went with them on their mission for about a day or so while the crew plotted enemy mines in the Tsushima Strait.

“The submarine that rescued us rendezvoused with a second sub, the USS Scabbardfish (SS-397), in the mouth of Nagasaki Harbor, before the Atomic Bomb was dropped. That’s where we transferred subs,” Weiler said. “The Scabbardfish was headed back to Guam where we were based.

“We stayed aboard the Scabbardfish for about 10 days before we reached Guam. They thought we were lost at sea by the time we arrived back in port. They gave us two weeks R and R in Honolulu. 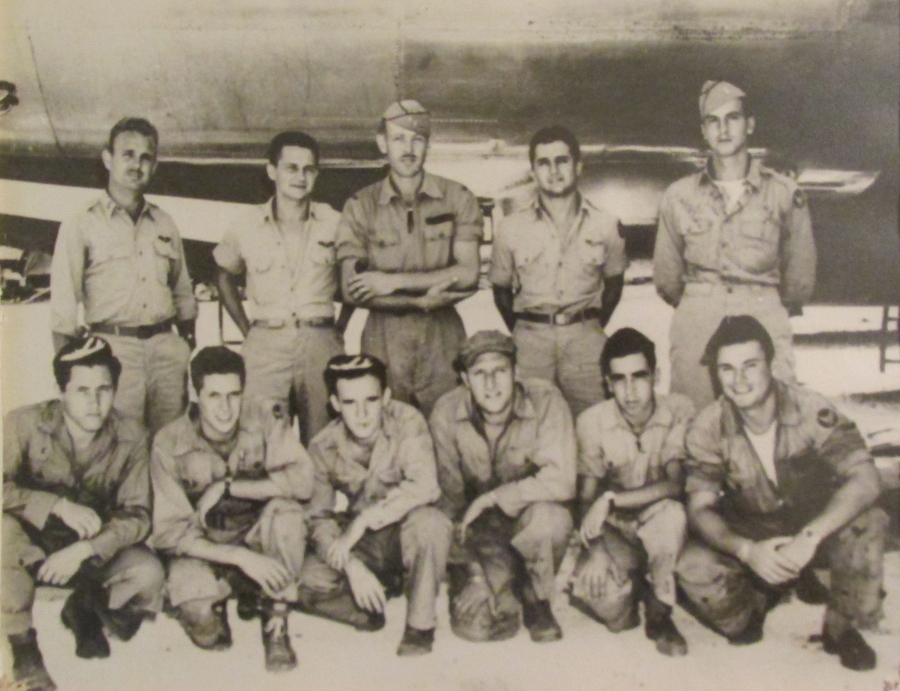 “After that we flew our last five combat missions. We took our last flight the day the war ended. Our radioman aboard ‘Sky Scrapper’ received a coded message: ‘Utah, Utah, Utah you S.O.B.s.’ This was the coded message that the Japanese had surrendered and we were to return to our base on Guam.

“When we got back to base the first thing I asked: ‘How long will it be until I get to go home?’ They wouldn’t give me a date,” Weiler said.

Months later he got aboard a troop transport to California. After arriving back in the States Weiler took a slow-moving train across the country to New York City.

“Bob arrived at Penn Station in New York City on our first wedding anniversary, Dec 2, 1945,” Louise, his wife of 70 years recalled. “I was there to meet him when he came in on the troop train from California. It was the dead of winter, it was snowing and he was standing there in his uniform outside the station with the snow coming down. He had been away at war nine months.”

Like millions of other servicemen and women, Weiler took advantage of the G.I. Bill. Before he marched off to war he had completed 2 1/2 years of college. He finished his BA degree in Economics in another year’s schooling.

“Initially I got a job with American Airlines the first four years I was out of college. Then I went to work as the assistant manager in a travel agency in Syracuse, N.Y. ”

Because he had a serious asthma problem his doctor suggest he needed to be in a warmer climate. He and Louise moved to Sarasota where they have lived ever since. For decades Weiler worked for South Gate Travel Agency on Siesta Drive. It no longer exists.

The couple has three children: David, Joyce and Peter.

This story was first published in the Charlotte Sun newspaper, Port Charlotte, Fla. on Sept. 19, 2014 and is republished with permission.