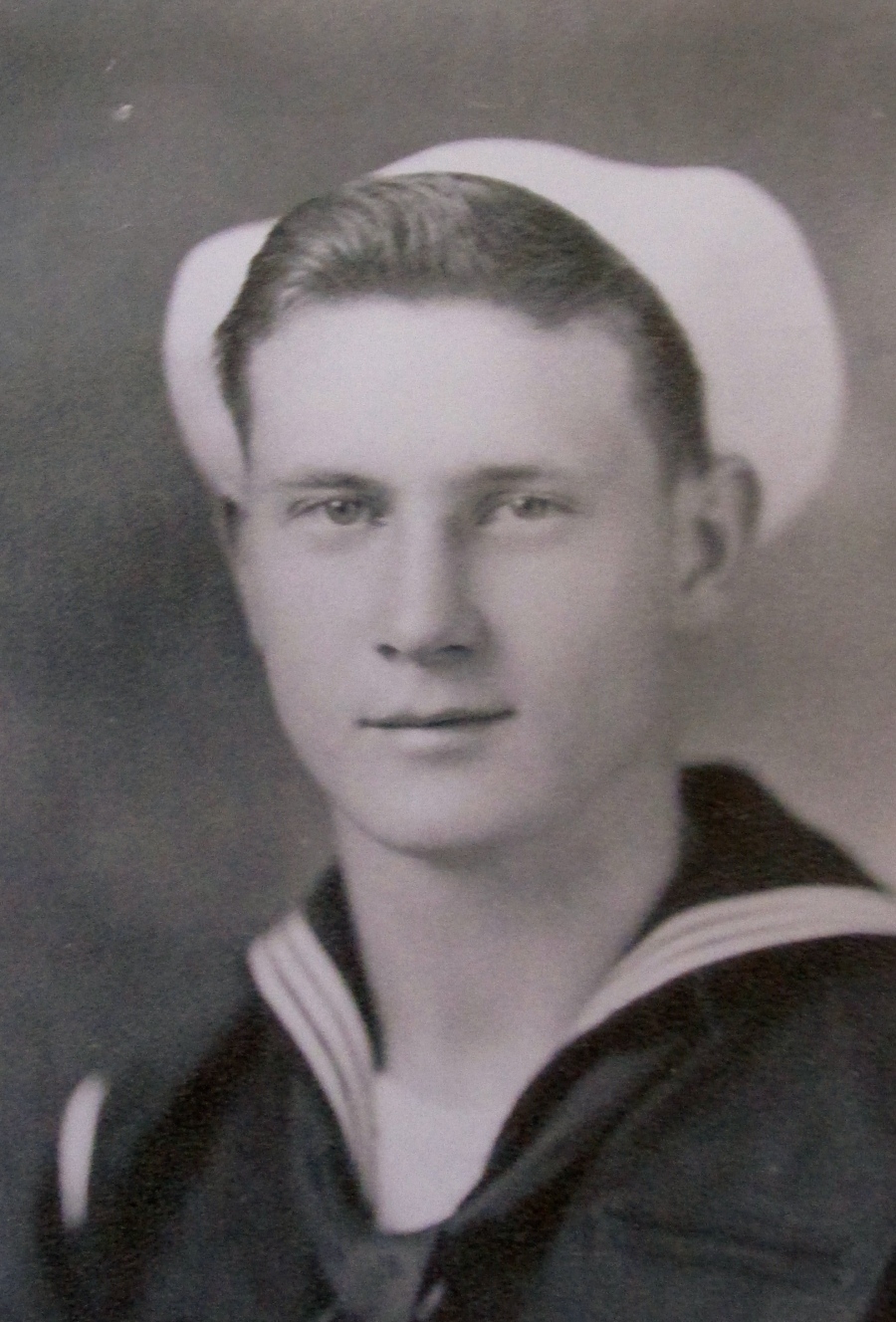 Earl Thompson is picture at 17 when he graduated from boot camp at Great Lakes Naval Processing Center outside Chicago in 1945. He wound up at Okinawa but missed he battle. Photo provided

Earl Thompson is picture at 17 when he graduated from boot camp at Great Lakes Naval Processing Center outside Chicago in 1945. He wound up at Okinawa but missed the battle. Photo provided

It was July 22, 1945 when Earl Thompson, a Navy fireman who now lives in Port Charlotte, Fla.  sailed into Buckner Bay aboard a transport ship that dropped anchor off Okinawa. The 17-year-old swabbie was one of the thousands of servicemen aboard these ships.

“The day we arrived we were told they had just secured the island from the Japanese. But you could still see stuff was going on,” the 86-year-old local resident explained seven decades later.

Thompson and his buddies missed the biggest battle fought in the Pacific during World War II. Okinawa was where more than 100,000 of the Emperor’s finest troops cashed it in. Some 7,000 Japanese soldiers surrendered and were captured alive.

Okinawa was also where more than 12,000 American marines, soldiers and sailors were killed and 38,000 more wounded during the 82-day battle that began Easter Sunday morning, April 1, 1945, and lasted until June 22.

In addition, between 50,000 and 150,000 civilian Okinawans – nobody knows exactly, were killed or committed suicide during the epic Pacific battle.

“When we arrived it was raining like mad. It took us four hours to drive a weapons carrier two miles through the mud to our camp. We had to get out and push the truck. When we weren’t pushing it we were using a wench on the front of the carrier to pull it out of the mud,” he recalled

“After we set up our pup tents in the mud the officer of the day had us walking guard duty with our carbines right away up in the hills above the beach,” he said. “I’ll never forget the first time I went up in the hills to walk guard duty and saw this dead Japanese soldier along the path. The only live Japanese we saw on Okinawa were the ones who were captured.

“Even thought almost all the fighting was over on Okinawa by the time we arrived, we did see a couple of Japanese soldiers who hadn’t surrendered get shot while running around out in the rice patties,” Thompson explained.

“When you were on guard duty at night you could hear the chirp, chirp, chirp of the frogs in the rice paddies. You could tell when the Japanese or some of the natives were moving around in the paddies because the frogs stopped their chirping.”

Even though the war had moved further east, closer to the Japanese home islands, suicide pilots showed up occasionally flying over Buckner Bay looking for American air craft carriers or battleship to destroy.

“Just after we got word that the Japanese had surrendered on Aug. 14, 1945 the navy crews put canvas over their big guns aboard all our ships in the bay,” Thompson recalled. “Right after that two kamikazes flew over just above the water where our guns couldn’t bear and one struck the Battleship Pennsylvania and the other attack a transport ship.

“Most everyone on shore was firing their weapons in celebration the night we heard about the surrender that ended the war,” he said. “It was a dangerous night on Okinawa for all of us because many were injured and some were killed by falling shrapnel fired by our troops that night. 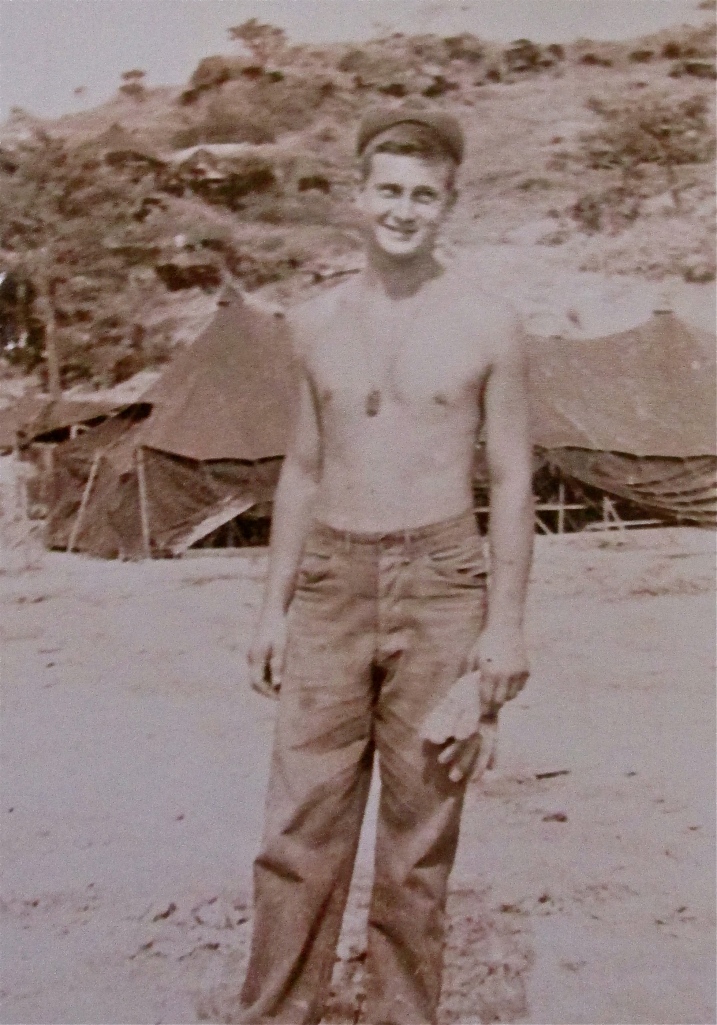 Thompson is relaxing on Okinawa probably shortly after he walked guard. He did a lot of that during the year he spent on the Pacific island at the end of the war. Photo provided

“At that time we knew nothing about the atomic bombs dropped on Japan. We didn’t find out about the bombs until about the time the official surrender was signed aboard the Battleship Missouri in Tokyo Bay on Sept. 2, 1945.”

After the shooting was over, Thompson was moved into the motor-pool where he spent the rest of his time on the island repairing Jeep and truck engines for the Navy. Probably the most exciting time he had on the island was when a typhoon struck Okinawa on Oct. 9, 1945.

“During the middle of the storm I was hiding behind a road paving machine with a couple of buddies to shield myself from all the debris flying around in the storm,” he said. “One of my buddies, who was a few feet away, was hit in the neck by a piece of flying tin. I crawled out from behind the paving machine to rescue him and I was hit in the back by a wooden floor the Seabees built for the bottom of an eight-man tent that had gone airborne.”

After recovering in the local Red Cross hospital on the island, Thompson began his job in the motor-pool. He worked there until late July 1946 when he took a ship back to San Francisco. A few weeks later he was discharged from the service at Great Lakes Naval Reception Center outside Chicago where he had joined up the year before. He was just 18.

He took the G.I. Bill and went to Indianapolis Technical School where he graduated in electronics.

Right out of school Thompson got a job as chief engineer with Radio Station WCNB in Connersville, Ind. When he wasn’t working at the station he was playing golf.

A short time later he went to work at Patrick Air Force Base at Cape Canaveral on electronic equipment working for Pan American Airways.

“They ran the down range operation for the government. We were tracking military missiles shot down range from a tug boat in the Atlantic,” he said. “We had special equipment aboard that could track the rockets.”

In 1958 Thompson took a job with WHOO-TV in Orlando. He helped get the TV station up and running. He became the chief studio engineer at WHOO.

Then he took a job with Martin Corp. that built missile master simulators in the Orlando area. He worked there a few years until he went to work for Grumman in Long Beach, N.Y. in 1965 during the Apollo Moon Project and was transferred back to Cape Kennedy.

“My job was to check out the electronics on the lunar module,” Thompson said. “I also designed the antenna it used on its trip to the moon. I worked with the astronauts.”

After the moon walks were over, he went to work for Grumman in California where he was involved in checking out the electronics on the F-14 “Tomcat” fighter the firm built.

“Then I got into trouble shooting on a lot of Grumman’s aircraft all over the country. I started working on many of Grumman’s Navy electronic contracts. I began testing electronic warfare stuff for Grumman. I did that for 18 more years until Tina, my wife, and I retired to Port Charlotte in 1991.

The couple has two grown children: Brad and Brenda.

This story was first published in the Charlotte Sun newspaper, Port Charlotte, Fla. on Wednesday, April 16, 2014 and is republished with permission.