Clayton Raynes of La Casa mobile home park in North Port, Fla. is pictured as a 22-year-old second lieutenant when he graduated from flight school in 1943 during World War II. Photo provided

On an overcast April night in 1943 a lone B-17 bomber dubbed “Hotfoot Two” flew from Newfoundland to Greenland on its way to Scotland, Ireland, England and the war zone in Europe. The “Flying Fortress” was destined for the 8th Air Force to became one of the thousands of American, four-engine, heavy bombers to wield Hitler a knockout punch.

“I almost never saw the Atlantic Ocean during all of the flight over,” Clayton Raynes, of La Casa mobile home park in North Port, Fla. recalled 70 years later. “We had clouds above us and below us most of the way. It was Lindbergh all over again. The first ground we saw was the green grass of Ireland. Nothing looked more beautiful.”

He was a member of the 333rd Squadron, 944th Bomb Group, 8th Air Force flying out of a base near Bury St. Edmonds, a town 50 miles southeast of London.
The crew of “Hotfoot Two” flew its first combat mission to Le Mans, France, on June 26, 1943, according to the flight log. Raines was bombardier. After their bombs were dropped he substituted as nose gunner. 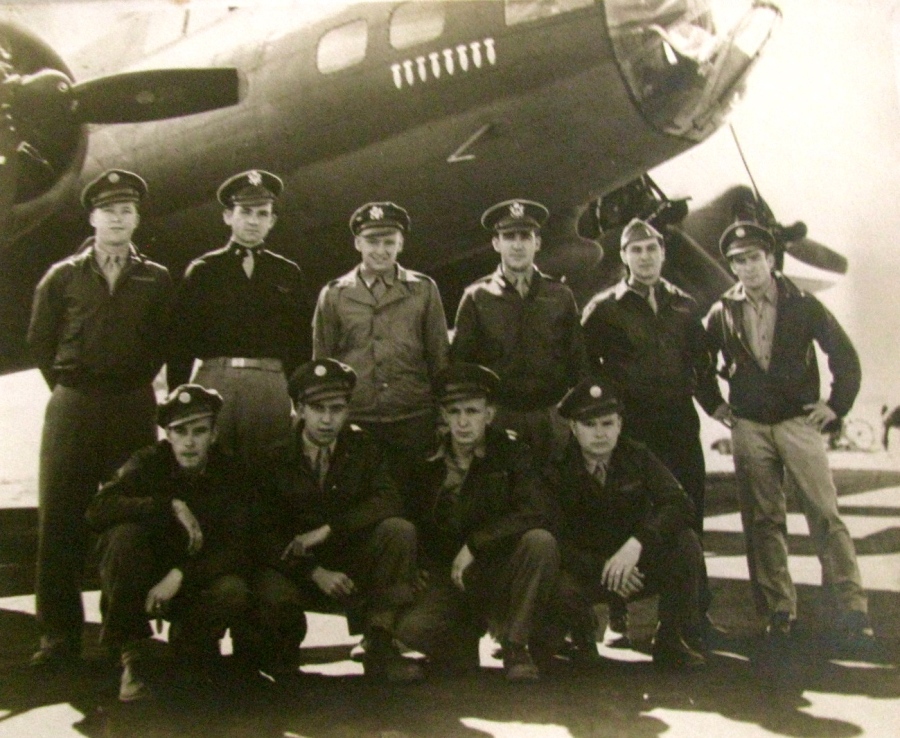 The mission he recalls best is the one they made to Stuttgart, Germany on Sept. 6, 1943. It was their 19th, they had six more to fly before returning to the U.S.A. and teaching other young men to be bomber crews.

“I probably was scared as hell, but I don’t remember being scared. What was more terrifying to me was the German ack-ack fire from the ground. As long as you saw a puff of black smoke you were okay, but if you saw smoke and flames in the same burst you were in trouble,” the 93-year old former bombardier said.

Their mission that day: Knock out a railroad marshaling yard supplying freight to a German factory complex at Stuttgart. Some 90 to 100 B-17s flew this mission that fall day in ’43. 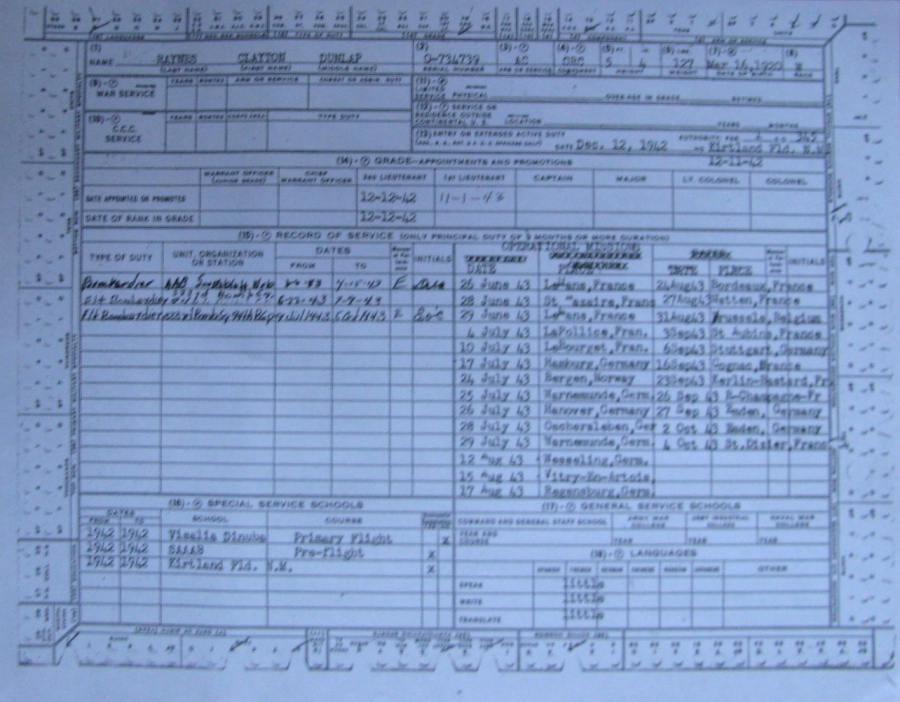 This World War II flight log from Raynes’ “Flying Fortress” tells his story. It notes he and his crew flew 25 combat missions over Nazi-occupied Europe starting on June 26, until Oct. 4, 1943. The crew of his B-17, “Hotfoot Two,” received the Distinguished Flying Cross for gallantry. Sun photo by Don Moore

“We were on the way back to base when attacked by German fighters. Staff Sgt. Kelly O’Keefe,a 19-year-old waist-gunner and the youngest member of the crew, was killed. A 25-year-old waist-gunner: Staff Sgt. Seaton Woodley Jr. was severely wounded. “Woodley survived the flight, was taken to a hospital. We never saw him again. All these years we thought he was dead,” Raynes said the other day.

A couple of weeks ago he received a letter from his war buddy, Earl Miller, the 94-year-old former pilot of “Hotfoot Two.” The two old warriors have corresponded for years.

“‘I have a pleasant surprise for you,” Miller wrote Raynes. “My grandson, Tim, was able to find out what happened to Woodland through the internet. Seems he spent three years in Walter Reed Hospital after the war, married (Vera) the Navy nurse who took care of him, had a son and a daughter, and for 40 years, until his death in 2005, served as a Methodist minister in churches in the North East.”

What Tim also learned by talking to Woodland’s son, his father believed the rest of the crew aboard “Hotfoot Two” had been shot down and killed during the war after he was wounded and was sent home to recover.

Raynes holds a shadow box full of his World War II military medals, bars and patches that hangs on his study wall in La Casa. At the top left in the box is his Distinguished Flying Cross. Sun photo by Mary Auenson

In Raynes’ study is a shadow box containing his war memorabilia. In the upper left corner is the Distinguished Flying Cross he received for surviving 25 combat missions.

“I read somewhere after the war 45 percent of the American bomber crews in the 8th Air Force during the early part of the war like we were were shot down,” he said.
Raynes sailed home aboard the Queen Elizabeth. Marie, his wife, was waiting for him in Columbus, Ohio. He took the G.I. Bill and graduated from Ohio State University School of Pharmacy in 1949. He spent the next 40 years as manager-owner of Meyer’s Pharmacy in Dayton, Ohio. The couple retired in 1990 and moved to North Port. They had two boys: Clayton Richard and Phillip Arthur. Clayton died in an auto accident in 1967 after serving a tour in the Marine Corps in Vietnam.

This story was first published in the Charlotte Sun newspaper, Port Charlotte, Fla. on Sunday, March 17, 2013 and is republished with permission.

Maria and Clayton Raynes of La Casa mobile home park are the guests of honor today at a 70th wedding anniversary celebration attended by family and friends from around the country. The 93-year-old couple is holding their wedding picture taken March 17, 1943, during World War II, when they were 22. Sun photo by Mary Auenson

Seventy years ago today Marie and Clayton Raynes of La Casa mobile home park in North Port were married in a small church ceremony in Scottsbluff, Neb. by a minister named Love.

It was March 17, 1943, the middle of World War II. Clayton was in in the Army’s Aviation Cadet Program learning to become a bombardier on a B-17 “Flying Fortress” four-engine bomber. Marie would return to her Columbus home and work as a secretary until her husband came marching home.

A few weeks after the two 22-year-olds got hitched the young lieutenant flew off in a bomber named “Hotfoot Two” one evening in April headed for Europe and the 8th Air Force. Twenty-five combat missions and a lot of blood, sweat and tears later he returned unscathed from the conflict.

Like millions of other Second World War service men and women, Clayton used the G.I. Bill to go Ohio State University and obtain a pharmacy degree. For 40 years he ran his own drugstore on Main Street in Dayton, Ohio.

In 1990 the Raynes retired, moved to Florida and bought a home in La Casa.

On Saturday, Clayton celebrated his 93rd birthday topped off by their 70th wedding anniversary party the following day. It will be attended by relatives and friends from around the country.

How does one couple’s marriage work out so well for so long?

“Live your life as you go along and do what you have to do,” Marie said as she gave her husband a big smile.

Clayton’s take on 70 years of marital bliss, “I had to make an honest woman out of her.”