A Navy whale boat picks up a sailor swimming in Pearl Harbor in front of the battleship USS West Virginia badly damaged and in flames in the background on Dec. 7, 1941 shortly after the Japanese attacked Pearl Harbor. U.S. Government photo

A Navy whale boat picks up a sailor swimming in Pearl Harbor in front of the battleship USS West Virginia badly damaged and smoking in the background on Dec. 7, 1941 shortly after the Japanese attacked Pearl Harbor. U.S. Government photo

Seventy-one years ago today, at 8 a.m. on a Sunday, Seaman Joe Kleiss was aboard the USS Dobbin, an auxiliary destroyer docked in Hawaii, writing a letter home to his mother.

A moment later, he was fighting against the Japanese attack on Pearl Harbor, a survivor of the “day that will live in infamy” — Dec. 7, 1941.

“It was my day off,” Kleiss said at his current home in Port Charlotte, Fla. “I was below deck writing a letter. I wrote my mom a letter every day all through the war, you know,” the 84-year-old veteran recalled.

“At first we didn’t know what was going on when the Japanese attacked. We used to practice being attacked so much that we just thought it was another dry run.”

This time, it wasn’t.

“When general quarters was sounded, I went to my battle station on the rail at the quarter deck,” Kleiss said. His job was bringing ammunition to a 5-inch gun on the front of the ship.

From that vantage point, Kleiss watched as Japanese attack planes flew toward his ship, almost at eye level.

“The Japanese torpedo bombers were in the first wave that attacked Battleship Row,” he remembered. “They flew by us on their way out after hitting our big ships.

“They were flying about 20 feet above the water, eye level with the sailors aboard our ship. One flew by me, spraying 50-caliber machine gun bullets in all directions.

“The guy in the back seat of the torpedo bomber looked right at me. I gave him the finger. He gave it back to me as he flew by.”

Kleiss said as the attack continued he dived between stacks of the 5-inch shells he’d brought onto the deck. “If one of those machine gun bullets had hit the shells I’d stacked up, I wouldn’t be here today. ”

The Dobbin was a mother ship to a destroyer squadron that was part of Task Force 38. Her job: mother hen five destroyers, keep the “tin cans” supplied with ammunition and other supplies.

When the Japanese attacked Pearl Harbor, the Dobbin was anchored off Ford Island, rafting with four of her destroyer chicks. Kleiss and his buddies aboard the Dobbin had a ringside seat to Battleship Row, where eight of the Pacific Fleet’s dreadnoughts were moored. He could also watch the enemy bombing military airplanes on the tarmac on Ford Island.

Sailors try and salvage a burning Catalina flying boat at the Ford Island Navy Base at Pearl Harbor. Most of the American aircraft at the field were descimated by the Japanese attack that launched the United States into World War II. U.S. Government photo

“The Japanese were concentrating on our battleships. They were coming down the channel, flying over the sub base, hitting the big ships anchored dead ahead of them. The dive bombers also hit the airfield on Ford Island hard. That was right behind where the battleships were moored.

“When I first went out on deck … I heard a big bang. I didn’t see where it came from, but it was like a chain reaction as the torpedoes hit the battleships and blew them up.

“They got all eight of them. The Nevada, Arizona, Bristol, Tennessee, West Virginia, Maryland, Oklahoma and California were all hit,” Kleiss said.

“The battleships were blowing and many were on fire,” he said of the hellish scene unfolding before him. “Heavy black oil covered the surface of the harbor. Sailors on our big ships were being killed and injured. Others were jumping into the oily, black water to escape. The Pennsylvania was the only battleship that didn’t get sunk in the attack. It was in dry dock at the time of the attack.”

The attack that brought the United States into World War II lasted about 30 minutes. When it was over, 19 ships were damaged or sunk. On the ground at Wheeler Field, 188 planes were destroyed. Some 2,400 sailors, soldiers, Marines and civilians died, and 1,178 were wounded.

As the Japanese planes flew into the distance, the Dobbin put open whale boats over the side to pick up the injured, some covered in black bunker-C oil.

Kleiss stayed aboard ship and set up machine guns in case another wave of Japanese planes came.

That didn’t help most of those aboard what was left of the badly battered U.S. Pacific Fleet or the thousands of Americans living on Pearl Harbor.

“The people on my ship were worried the Japanese might bring troops ashore the next time they attacked,” he said. “The attack on Pearl Harbor scared the hell out of everybody who was out there.

“Right after the attack, people on shore became alarmed when they saw these ships approaching the island. It was a bunch of our ships coming into port,” the old salt said.

It could have been the enemy.

After Pearl Harbor, Task Force 38 went to sea. The USS Dobbin and Seaman Joe Kleiss went with it.

Sometime later he switched ships. He went aboard the USS Dionysus (AR-21), a repair ship that helped keep the fleet repaired and ready for battle. 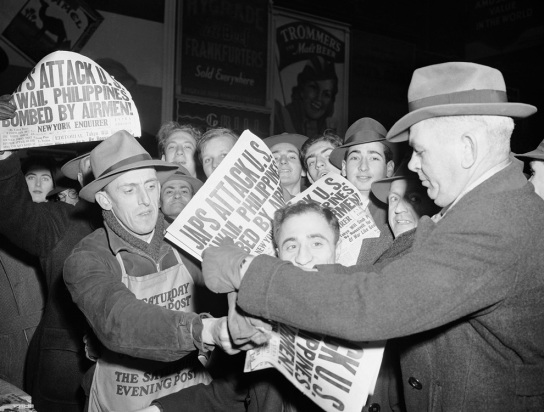 After atomic bombs were dropped on Hiroshima and Nagasaki in August 1945, the Japanese surrendered. By V-J Day (Victory Over Japan), the Dionysus and Petty Officer Kleiss sailed into Tokyo Bay. They arrived two weeks after the Japanese signed an unconditional surrender aboard the battleship USS Missouri on Sept. 2, 1945. General Douglas MacArthur orchestrated the surrender ceremonies aboard the “Mighty Mo.”

“The only thing standing when I went ashore in Tokyo were a few concrete buildings, but they didn’t have too many of them. People were living in holes in the ground with sheet metal over the top of them to protect them from the elements,” Kleiss said.

“The Japanese didn’t think too much of the atom bombs we threw on them. When you would meet them on shore they would greet you with a big smile and a bow, but they wouldn’t shake your hand,” Kleiss said. “We had no problems with them. But I think they were a little suspicious of us. I believe that’s why they had big grins on their faces.”

Six weeks later, he shipped back to the states. It wasn’t long afterward that Kleiss completed his six-year hitch in the regular Navy.

He went to sea in January 1941 as a 21-year-old farm boy from Pesotum, Ill., near Champaign. When he returned home to his first wife and young child, he was a 26-year-old seasoned chief petty officer who had sailed the seas and who helped win the biggest war in world history.

Joe died in 2006 and is survived by his second wife, Mary, who continues to live in Port Charlotte, Fla.

This story was first published in the Charlotte Sun newspaper, Port Charlotte, Fla. on Sunday, Dec. 7, 2003 and is republished with permission.