Hemingway is shown (at the right) with a buddy and a mortar somewhere in Europe during the early 1960s. Photo provided 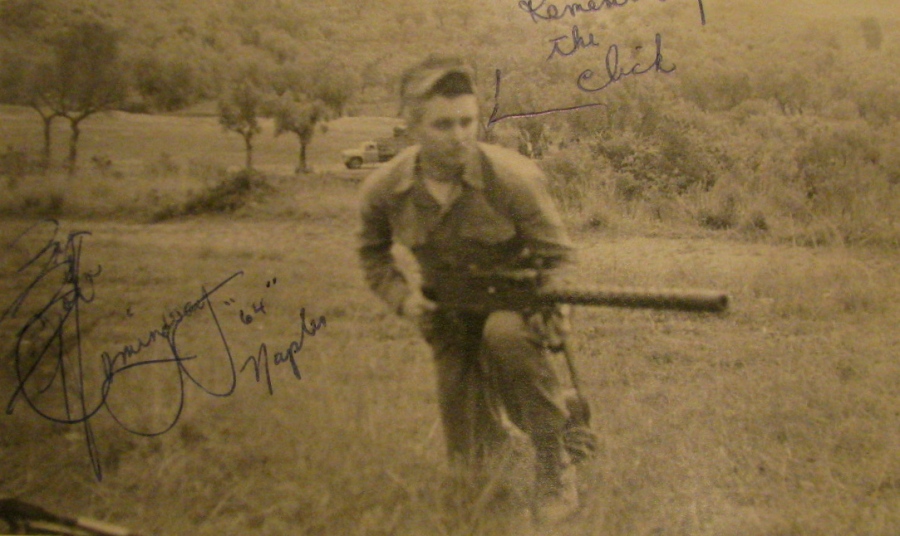 Pfc. Bob Hemingway served as a light machine-gunner in the 2nd Marine Division during the 1960s. Here he’s horsing around with the .30-caliber gun for the camera. Photo provided

Bob Hemingway of Lake Suzy, near Port Charlotte, Fla. was a junior in high school in New Haven, Conn. when he dropped out of school and joined the Marine Corps. He ended up in the 1st Battalion, 6th Marine Regiment, 2nd Marine Division stationed at Camp Lajeune, N.C.
“It was the spring of 1961, just before the ‘Bay of Pigs’ disaster, when our division was loaded on to trucks and taken to Moorhead City, N.C. where we boarded troop transports. We didn’t know where we were going or why at the time,” the 70-year-old Marine said.

The “Bay of Pigs Invasion” was the U.S. Central Intelligence Agency’s invasion of Cuba by Brigade 2506, a hodgepodge group of CIA-trained Cuban anti-Communists. It was an ill advised, poorly executed, under-supported adventure. Three days after the first Cuban irregulars hit the beach along the central coast of Cuba they were captured or killed by Fidel Castro’s leftist leaning Cuban military.

Plans for the invasion were begun under the administration of President Dwight Eisenhower in the late 1950s. The former Supreme Allied Commander In World War II decided that Cuban government was becoming more and more infatuated with Communist ideology. Eisenhower’s solution: overthrow the island nation’s government.

Although the retired general and president obtain $13 million in funding to finance the Cuban invasion, the plan didn’t become a reality until John F. Kennedy became president in 1961. He inherited Ike’s invasion plan and carried it out.

“When our transport ships reached the Bay of Pigs we circled around off the beach for a long time. It must have been around mid April 1961 when all this was happening,” Hemingway recalled. “We could hear explosions in the distance, but we could’t see much of what was happening on shore. Then our part of the Bay of Pigs Invasion was called off.

Hemingway is shown (at the right) with a buddy and a mortar somewhere in Europe during the early 1960s. Photo provided

When Soviet nuclear missiles were discovered in Cuba by U.S. reconnaissance planes in October 1962 the world was on the brink of a nuclear a holocaust. Batteries of Soviet missiles had been smuggled into Cuba aboard ships and were in the process of being set up 90-miles from the coast of Florida.

Both sides–American and Soviet forces–were eye-to-eye and toe-to-toe with their nuclear forces on high alert all around the world. They were within the push of a red button from a nuclear disaster that might have doomed mankind.

After the unsuccessful Bay of Pigs Invasion a few months later, Soviet Premier Nikita Khrushchev proposed to Castro that Soviet missiles be put on Cuban soil to deter future U.S. invasions. The Cuban dictator bought into the idea.

On Oct. 14, 1962 a U-2 spy plane captured pictures of Soviet missiles being set up in Cuba by Russian crews. Initially U.S. officials considered invading Cuba by air, land and sea to destroy these missiles. Then President Kennedy devised a military blockade of the island instead. He advised Khrushchev the U.S. would not allow Soviet nuclear missile to be placed in Cuba and demanded they be dismantled immediately and returned to the USSR.

For 13 perilous days the world watched and waited for a big bang.

Unbeknown to the public both Kennedy and Khrushchev secretly negotiated there way out of the confrontation. Unexpectedly, a deal was reached!

The Soviets would dismantle its missiles if the U.S. would sign an agreement it would not invade Cuba. Secretly the U.S. also agreed to remove its ICBM missiles from Italy and Turkey.

All Hemingway knew about the crisis was he and his buddies could see Soviet missiles coming out of Cuba on Russian ships shortly after Oct. 24, 1962 when both sides came to an understanding.

“I was on he deck of the Okinawa when we saw the Russian ships leaving Cuba,” he said five decades later. “The missiles were plainly visible with binoculars on the decks of the Russian ships.”

After that, Hemingway and his division was relocated to the American base at Guantanamo Bay, Cuba. He spent the next 90 days guarding the fence line against Cubans. It was uneventful and the 2nd Division eventually returned to Camp Lejeune.

“It was about this time I put in for a transfer. All of us wanted to get out of the amphibious assault force and find something more interesting to do,” he said. “I asked to be relocated to Japan, Philippines or Italy.

Hemingway takes a break and sits on a wall along Almaifi Drive near Sorento, Italy overlooking the Mediterranean. He and his buddies were touring Europe while on leave from the Marine Corps. Photo provided

“A few days later someone asked me, ‘Do you like pizza?’ Hemingway recalled. “I was going to Naples, Italy. “We took a big transport from Lejeune to the Azores and from there to Spain and on to Naples.

“Shortly after I got to Naples President Kennedy was assassinated. It was November 1963 and I remember I was off duty watching a movie on base when the non-commission officer on duty that night came in and shut off everything in the recreation room.

“‘The president has been assassinated and that’s it,’ the NCO said. “We didn’t know much more than that for a while other than the scuttlebutt we heard on base.”
Hemingway’s tour of duty in Europe was mostly a sightseeing affair when he and his buddies were off duty. They’d rent a car and drive all over Europe checking out the sights the pubs and the girls.

“We loved Rome. We spent a lot of time there. I was standing in St. Peter’s Square at the Vatican with thousands of other people when Pope John died. It was something else.”

After returning from his tour in Italy he got out of the Corps and went to work for a few years as an inspector in a Prat & Whitney aircraft plant in North Haven, Conn. Then he joined the New Have Police Department as a patrolman. He remained in the department until his retirement from the force in the mid 1980s.
He and his wife, Maria, moved to the Port Charlotte area 25 years ago. They have three grown children: Robert Jr., Christen and Tanya.

This story was first published in the Charlotte Sun newspaper, Port Charlotte, Florida on Monday, Dec. 3, 2012 and is republished with permission.