Twelve-year-old Slade Tully talked to his dad, Green Beret Sgt. 1st Class Michael Joseph Tully, by phone from Baghdad for the last time Aug. 18, 2007. The sergeant was killed by a roadside bomb.

The 33-year-old soldier was riding in a military vehicle west of Baghdad at noon when it rolled over an improvised explosive device that detonated in mid August 2007.

“Mike was killed and four other Green Berets in the vehicle with him were injured,” Michelle Basilotte, Tully’s former wife and Slade’s mother, said Friday. By 8:30 p.m. Thursday, two soldiers visited their Ponce de Leon Boulevard home in North Port, Fla. to give the family the terrible news.

When he talked with his father for the last time, Slade, a Heron Creek Middle School student, said: “He wanted me to call Grandma and Grandpa and tell them what he was doing in Iraq. He also asked me to take care of Mom.

“Because they were on secret assignments, he never really said what he was doing over there. He just told me, ‘I’ll be gone, but I’ll keep in touch,'” Michelle said.

Shortly after Mike was transferred from North Carolina to the 1st Special Forces Group, Green Beret base at Fort Lewis, Wash., he was sent overseas. The sergeant was reassigned a couple of weeks later to the Baghdad area. He has been in the Middle East for about two months during his latest overseas assignment, his former wife said.

She said his body is on its way back to Dover, Del. John Tully, Mike’s older brother who is also a Green Beret, is accompanying the casket from Iraq to Dover and from there to Falls Creek, Pa., where they grew up.

A military funeral is tentatively planned for sometime next week. The details have yet to be worked out. Mike will be buried in a cemetery near Falls Creek. Michelle and Slade will be there. 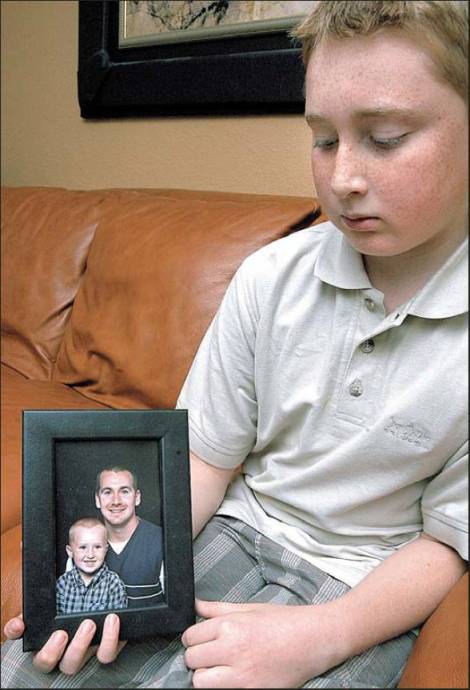 Slade Tully of North Port holds a picture of him and his dad, Green Beret Sgt. Michael Tully, who was killed by a roadside bomb near Baghdad. The picture was taken several years ago. Sun photo by Kharli Rose

Slade has taken the loss of his father hard.

“Slade cried all night and all day today,” she said. “He’s pretty emotionally drained, but he wanted to take part in the newspaper interview.”

The youngster sat beside his mom on a couch in the living room. Close by on a coffee table was a large box of Kleenex he occasionally reached for to wipe a tear from his eye.

The last time he saw his father was a year ago, his mother said.

“Mike called every week and he never missed a birthday or Christmas,” Michelle said. “If there was ever a medical issue with Slade, he would come here.”

She said he planned to take leave after he returned from his last Iraq assignment and visit his son. That’s one trip the sergeant will never make.

Tully joined the Marine Corps immediately after graduating from high school. Later, he switched to the Army Airborne and then became a Green Beret. The 33-year-old sergeant had made several trips to Iraq and the Middle East in the last several years.

Sitting with her arm around Slade on the living room couch Friday evening, Michelle said, “I wish they would all come back from over there.”

Asked what he remembers most about his dad, Slade said, “He was always concerned about other people.”

This story was first published in the Charlotte Sun newspaper, Port Charlotte, Florida on Saturday, Aug. 25, 2007 and is republished with permission.