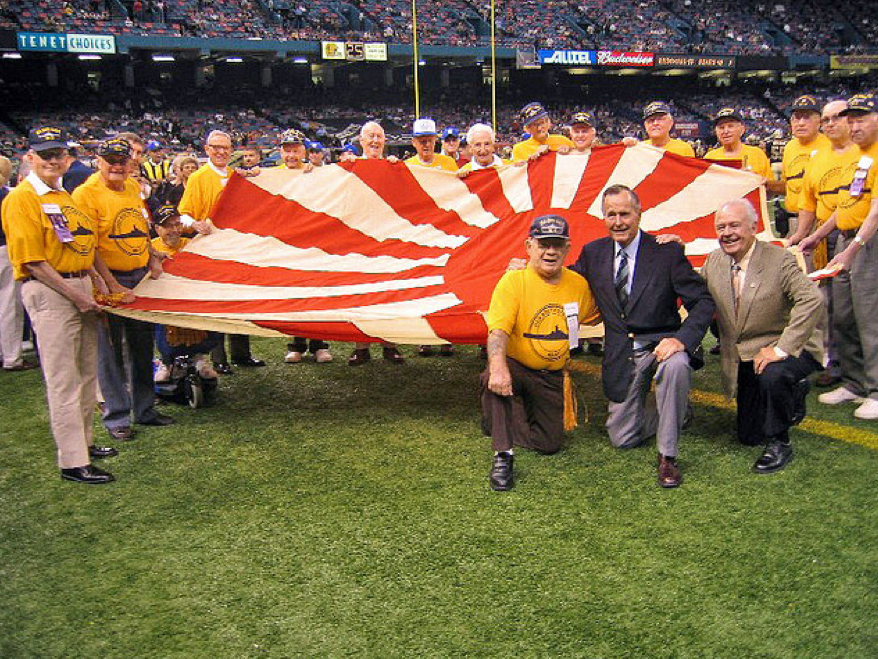 Members of the crew of the battleship USS South Dakota hold a Japanese battle flag during a reunion at the Super Dome in New Orleans on Oct. 17, 2004. George McNeill is second from the left. Former President George Bush kneels in front with Saint’s owner Tom Benson to his left. The flag was taken by a south Dakota crew member from the Battleship Nagato at the surrender ceremony on Sept. 2, 1945. The Nagato was Adm. Isoroku Yamamoto’s flagship when he commanded the attack on Pearl Harbor. Photo provided by George McNeill

George McNeill knows all about tsunamis like the one which devastated large portions of the southeast Asian coast of the Indian Ocean in 2005. He and the sailors aboard the troop transport, SS Denali, were hit by one in November 1942 while sailing from Seattle, Wash., to Dutch Harbor, Alaska.

“Several days out of Dutch Harbor during the 18-day trip, a buddy and I were standing on the bow of the ship talking. No one else was on deck when the wave hit,” the 79-year-old south Punta Gorda man recalled earlier this week. “Although the sea was calm at the time, we noticed something in the water dead ahead of us as we continued to talk. We finally realized this massive thing we saw in the water was a giant wave heading our way.

“By then, we knew we were in trouble. My buddy ran for a nearby hatch. He managed to escape below deck seconds before the wave hit the ship. I hunkered down in the bow under a protective lip that was part of the ship’s railing,” he said.

“The wave was two or three stories high when it washed over us. The ship vibrated and its forward motion stopped. It was like it hit a brick wall,” McNeill recalled. “I was hiding up under the bow looking aft and didn’t get a drop of water on me. I could see the wave go right over the ship. If the wave had been two or three feet higher it would have gone down the ship’s smoke stacks and blown our boilers. We would have been dead in the water.”

Despite the pounding from the tsunami, the Denali wasn’t damaged and no one was lost when the wave swept over the ship that was filled with 1,000 sailors. McNeill said the transport continued to sail along at six or eight knots toward Dutch Harbor like nothing had happened.

“I was concerned about the people who lived along the coast near Dutch Harbor because of the wave,” he said. “If the tsunami reached Dutch Harbor, I never heard about it. No one on shore said a word about the wave.”

For the next 18 months, he was attached to the Naval Operating Base at Dutch Harbor. His primary job was to help man a 20-mm antiaircraft gun along the runway of an air base located on the island.

Several months before his ship arrived, Dutch Harbor, located in the Aleutian Island chain off the coast of Alaska, was bombed by the Japanese. A Japanese infantry unit came ashore on Kiska Island further to the west in the Aleutian islands that jut into the Bering Sea.

American military commanders were concerned the enemy was attempting to invade the U.S. by attacking the Alaskan coast. The Aleutian invasion was a diversionary effort. It was part of a much larger Japanese attack that involved capturing Midway Island in the Pacific in June 1942.

The Battle of Midway was where the U.S. fleet sunk three of four first-line aircraft carriers in 10 minutes. Carrier-based planes sent the last Japanese flattop to the bottom the following day. This marked the turning point in the Pacific War in favor of Allied forces.

The 16-inch main guns of the Battleship South Dakota were almost McNeill’s undoing during the closing weeks of World War II. He served in the ship’s powder magazine but escaped injury when several shipmates were killed from exploding gun powder. Photo provided

After Dutch Harbor, McNeill became a gunner’s mate aboard the Battleship USS South Dakota fighting in the Carolina Islands in the Pacific. He joined the ship in April 1945. He worked in the lower handling room where powder was stored for the number-two battery of the battleship’s 16-inch main guns.

A couple of weeks after coming aboard, he and a number of other crew members were almost killed in an explosion in a powder room. The South Dakota was being resupplied with ammunition while at sea when the incident happened. It was Sunday morning, May 6, when the when the powder caught fire.

“My job that day was to communicate with topside from the magazine room, three decks below the main deck, using a set of headphones. I reported to topside each time a canister of powder came down the hatch,” he said. “Either the fifth or sixth canister exploded as it was being brought into position. We learned later static electricity caused the explosion.

“The impact from the explosion sailed me across the room where I hit a bulkhead. Then the lights went out. I wasn’t hurt, but there was scattered gun powder burning all over the deck.

“There was a lot of excitement and shouting in the smoky magazine,” McNeill recalled. “The sprinkler system was damaged in the blast and didn’t turn on.”

To escape the blaze and pending explosion, he and another 10 sailors working in the powder magazine with him went through a hatch into an adjacent magazine. They closed and locked the door behind them which left them in total darkness until a sailor found a battery-powered battle lamp on a bulkhead and turned it on.

“One of the guys suggested we could escape through a 1 1/2 by 2 1/2-foot hole used for for moving cans of powder from the deck below. That got us to the lower powder magazine. From there, we were able to reach a door that would give us an escape route to the main deck, but the door was bogged down,” he said. “We started shouting and yelling and banging on the steel door. A sailor on the other side heard the commotion and unlocked the door.”

The 10 sailors who escaped the burning magazine told their shipmate about the fire in the magazine. They convinced him to flood the powder magazine by turning the sprinkler system on by hand. He received a medal for saving the ship McNeill said.

Eleven sailors lost their lives that day. The South Dakota had to return to Guam for repairs, but by mid-July she was back at sea again.

“On July 14, 1945, the South Dakota became the first American ship to shell targets on the Japanese main islands. We opened fire on the Imperial Iron Works at Kanaishi, Japan,” he said. “The fleet fired 800, 16-inch shells at the iron works. The 2,700 pound shells were capable of destroying an area the size of a football field.”

The bombardment, which included additional shells from the fleet’s five- and eight-inch guns, lasted several hours. During the attack, the iron works’ pig iron and coke production were badly damaged.

George McNeill wears his blue ball cap with USS South Dakota emblazoned on the front. He served as a gunner’s mate on the battleship during World War II. Sun photo by Don Moore

A month later, the fleet got word from the Secretary of the Navy on Aug. 15, 1945 (Pacific time) that Japan had surrendered, McNeill said. The decision to surrender came several days after a second atomic bomb was dropped on Hiroshima. President  Harry Truman estimated that at least 500,000 American lives were saved by dropping the two bombs. Secretary of War Henry Simpson put the figure at 1 million.

After the war, McNeill worked for McDonald Douglas Aircraft in St. Louis, Mo. for 35 years. He and his wife, Helen, retired to San Sebastian Harbor subdivision, south of Punta Gorda, Fla. 16 years ago.

This story was first published in the Charlotte Sun newspaper, Port Charlotte, Florida on Sunday, Jan 9, 2005 and is republished with permission.