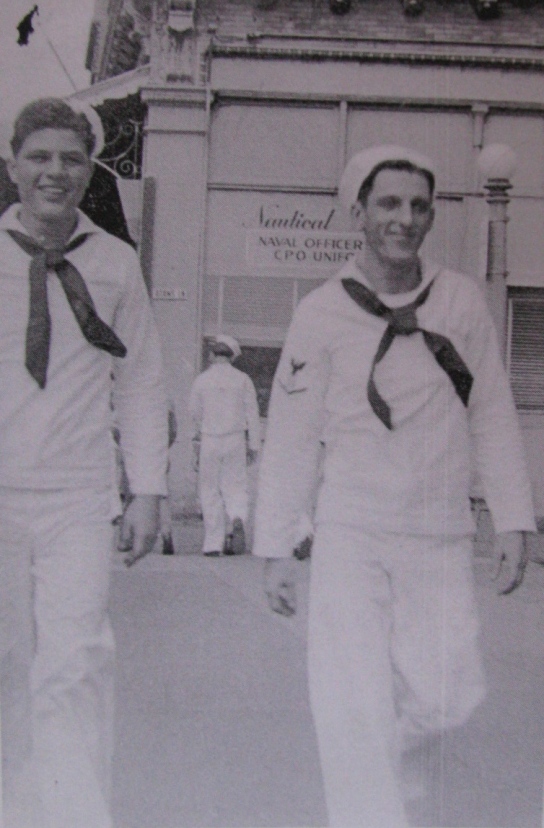 Ed McFadden (left) and a buddy are obviously pleased about being on shore leave in Honolulu, Hawaii during the Second World War. Photo provided by Ed McFadden

The toughest day of World War II for 17-year-old Seaman Ed McFadden was partway through the battle of Okinawa in March 1945.

That day, he was not at his normal battle station in the foretop lookout 150 feet above the deck of the World War I battleship USS Colorado. That day he was on a small deck one level below and behind the bridge.

“There were three lookouts with a guy on the phones relaying what we were seeing to the gunnery officer. I was in the center chair on the port side when I spotted a twin-engine Japanese Betty bomber off in the distance coming right for my nose,” the 75-year-old Punta Gorda, Fla. man said.

“The Betty was within 150 to 200 yards from the side of our ship when it exploded,” McFadden said with relief more than half a century later. “I was so scared I could’ve peed in my pants. I’m not certain, but I think our guy on the phones ducked out when he saw the Betty coming our way and hid behind the radar units aboard ship.”

The Colorado spent 63 days off shore at Okinawa pounding everything that moved on the beach with its 16-inch guns. It was the kamikaze attacks that American sailors, who suffered through the 82-day battle aboard ship, remember most. Suicide pilots in their fighters and bombers attacked the fleet in hordes.

“Every day there were kamikazes. One day, there were over 100 of ’em. There were so many of ’em I couldn’t count ’em,” McFadden said. “I sat in the foretop with my binoculars and saw a destroyer escort on picket duty take hits from one Japanese plane after another. She burned and I think she went down.”

The USS Colorado took a worse beating during the Battle of Leyte Gulf, just before Luzon, where Gen. Douglas MacArthur waded ashore and proclaimed to the world, “I have returned,” after setting foot on the Philippines again.

McFadden’s battleship was part of the 7th Fleet at Luzon. It was doing its thing bombarding shore positions, as always with its heavy guns from early January to mid-February 1945.

“We were bombarding the island and we were at relaxed general quarters. All of a sudden enemy aircraft were all around us. The sky was black from shell bursts,” the old sailor said. “I could see two Zero (fighter planes) coming toward our stern while sitting in the foretop. Two of ’em were coming in together. They knew what they were doing.

“Everybody was shooting at ’em as the first one came in over the catapult for our spotter planes. It hit a tub of Marines on the starboard side of the ship who were firing 20-mm (anti-aircraft) guns. Ten or 12 Marines died in the flaming crash.”

USS Colorado, BB-45, was part of the 1,200-ship Allied armada that bombarded Okinawa during the 82-day battle that came near the conclusion of World War II. Here it fires its 16-inch main guns at the battered Pacific island. Photo provided

The second Zero hit the Colorado’s teak deck near where the first fighter exploded in flames. Both fighters tore up the wooden decking on top of the two-inches of steel plates that formed the under-deck. Neither kamikaze did any structural damage to the battleship.

“The fire from the exploding planes was quickly extinguished. Our ship kept on firing right through the kamikaze attack,” he said.

It wasn’t just airborne attacks they had to cope with. The sailors of the 7th Fleet were also confronted with kamikaze boats.

These were low-profile wooden boats that were hard, if not impossible, to pick up on radar. If they could slip alongside with their bow full of explosives the lone Japanese sailor would blow himself and his craft up in hopes of sinking or badly damaging a U.S. fighting ship.

“At Luzon we’d watch and listen for these Japanese putt-putts,” he said. “The only one I saw looked like a surfboard with sides. It had an outboard engine on the back and some kind of dynamite charge in the bow.”

The kamikaze sailors would attack at night or during the day when the Colorado was making smoke to protect it from attacking fighter planes.

“We put Marines on the side of our ship with submachine guns to protect against these boats. They were the only ones authorized to shoot at them because we were right in the middle of the fleet and didn’t want to be shooting our own men,” McFadden explained.

After Luzon the Colorado’s crew and the crews of several other ships were give a little time off from the war. They were on their way to Hong Kong when a monster storm hit.

“in the middle of the typhoon we lost a (destroyer escort) with all hands. It tipped over in 70 to 80 foot seas and 100 mph winds,” he said. “Our ship was taking water all the way up to the bridge. It was the only time I was seasick aboard ship.”

Unfortunately for the battleship and its consorts, after the storm the fleetl turned around and headed back to Luzon. Not a single sailor got his Hong Kong liberty.

“The next thing I knew, we got word the Colorado had another assignment. We thought we were headed for Iwo Jima, but we ended up in Okinawa, where we spent more than two months pounding the island with our big guns.

“When we finished with Okinawa we got orders we were going to Japan to take part in the invasion,” McFadden said. “On the way to Japan they dropped  ‘The Bomb’ and the war was over.

“We dropped anchor in Tokyo Bay. I watched from the foretop as they signed the surrender document on Sept. 2, 1945. We thought it was a trap. We thought the Japanese were going to hit us with more kamikazes. After they signed the treaty, that put us at ease,” he said.

A couple of days later he was given his first shore leave in months. He and a few buddies went to Tokyo on a pass.

“I didn’t smoke so I had two cartons of Lucky Strike cigarettes strapped to my legs. I exchanged the cigarettes for lots of yens that spent just fine,” McFadden said.

“I went into this half-bombed-out department store like Marshall Fields in downtown Tokyo that was still operating,” he recalled. “There was this beautiful 3-foot-tall geisha doll with a porcelain head, hands and feet in a plastic case. I paid $30 American for her.

“Then I ran into this guy who had a Japanese rifle and bayonet I bought for $5 American. It was in perfect condition.”

He got the doll and the rifle aboard ship despite a bit of hassle from the officer of the deck. He put them in his metal wall locker for safekeeping.

A short time later the Colorado sailed out of Tokyo Bay for Honolulu. The ship picked up a boat load of American POWs who had spent years in Japanese prison camps and brought them back to the U.S.

When the Colorado reached Bremerton, Wash. McFadden was discharged. The young sailor and three buddies bought a car and drove back home to Chicago where they all grew up.

McFadden was still 17-years-old when he received two battle stars for participating in two of the major engagements in the Pacific–Leyte Gulf and Luzon. A year later he got his third star for Okinawa. When he was discharged he had just turned 19.

Ed McFadden stands beside two pictures on his living room wall of the battleship USS Colorado being repaired at Bremerton, Wash. He served in the Pacific during World War II. Sun photo by Don Moore

He joined the Chicago Police Department shortly after the war. McFadden retired from the department in 1983. The next year he moved to Punta Gorda and became a Charlotte County sheriff’s deputy. He retired for good in 1994.

“Now, do you want to hear the sad part of my story?” he said.

“All I have left is the bayonet from the Japanese rifle. My son has it in Chicago,” McFadden said with a smile.

This story was first published in the Charlotte Sun newspaper, Port Charlotte, Florida on Sunday, March 25, 2003 and is republished with permission.