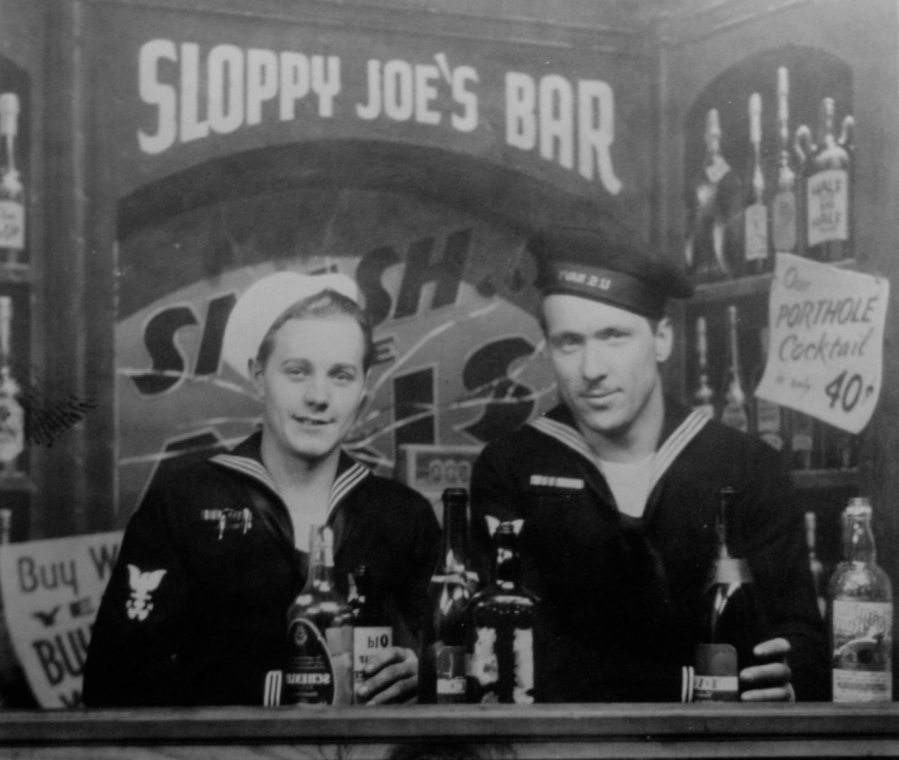 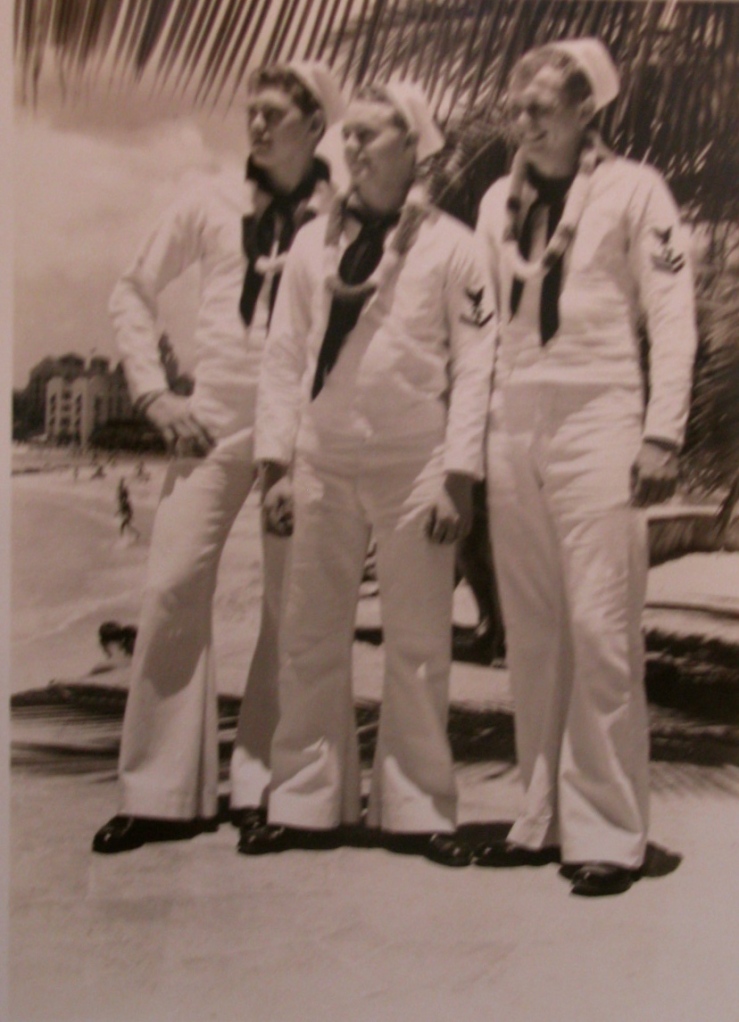 Motor Machinist Mate 1/Class Ted Schulz (center) of Port Charlotte, Fla. and two of his buddies were out on the town in Honolulu during World War II. Photo provided.

Ted Schulz of Port Charlotte, Fla. had already crossed the Atlantic three times aboard a destroyer escort, USS Fiske, protecting transports full of military supplies on their way to North Africa when his ship was reassigned to a hunter-killer group in the North Atlantic searching for German U-Boats.

“It was the spring of 1944 and we had just returned to New York from our third Atlantic crossing when we were assigned to the aircraft carrier Wake Island along with three other DEs to search for German subs,” the 88-year-old former sailor said. ‘We picked up the carrier out at sea and headed for the North Atlantic.

“German subs had just been fitted with snorkels which allowed them to draw air from the surface into the submarine and stay under longer. One of our men spotted a periscope and the Fiske and another destroyer escort, USS Douglas L. Howard, DE-138, were assigned to check out the contact.

“Our captain was about to fire a series of ‘Hedgehogs.’ They were fired off the bow of the Fiske into the water and only exploded if they made contact with something metal. At that moment we were torpedoed by the U-boat,” Schulz explained.

Thirty-three sailors aboard the escort ship lost their lives in the sinking, Aug. 2, 1944. The remaining 180 aboard ship were rescued.

The USS Fiske, DE-143, is pictured floating in the North Atlantic after the destroyer escort had been cut in two by a torpedo from a German U-boat. Schulz was in the engine-room when disaster struck. Photo provided

“The enemy torpedo struck us amidship and almost cut us in half. My battle station was in the engine room. It was my job to see that all the engine valves were turned off to ensure the watertight integrity of our section of the ship.

“There were about eight of us in the engine room closing valves. When the torpedo struck my head hit part of the engine and split my forehead open. I was a bloody mess.

“All of us in the engine room left through a hatch in the fantail of the ship. When I climbed onto the deck our ship looked like a worm. Although it was still together its backbone had been broken and it was twisting and turning in the churning sea.”

Behind Schulz on the wall of his office were several aerial shots of the USS Fiske after she broke in two just before the bow section went down. The stern of the ship was still floating upright.

“The only reason the fantail was still floating in that picture on the wall is because of what we did. We made her water tight and we did a pretty darn good job,” the old salt proudly said six decades later

“When the captain said ‘Abandon Ship’ we all went over the side. By then most of the injured sailors had been put in rafts and the uninjured sailors hung onto the sides of these rafts maybe six men deep. We were all treading water and hanging onto each other.

“I had the idea the water was too cold for sharks,” Schulz said, “but I heard later there could have been sharks. I didn’t see any.

“In order to keep calm as we waited to be rescued we began singing songs. All kinds of different songs. I remember we sang ‘Roll Out the Barrel’ over and over,” he said. “Floating around in the sea hanging onto each other was scary – believe me.

“The USS Howard that came with us hauled fanny after the German sub. They never found it. The U-boat got away. 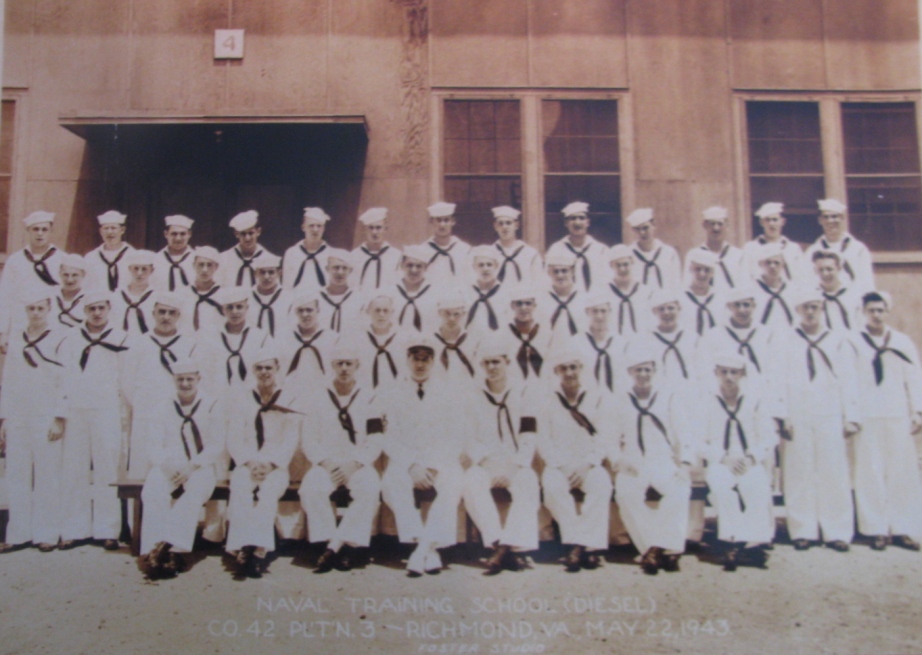 This is Schulz’s diesel engine reaper class in Richmond, Va. during the Second World War. He’s the little sailor at the far left in the second row. Photo provided

“Three or four hours later the USS Farquhar, DE-139, showed up and started taking us aboard ship,” Schulz said. “They rescued the injured first and then they threw lines down for the rest of us. None of us were able to climb up the boarding nets they put over the side. We were too beat.

“Once aboard ship they stripped us down and gave us a hot shower. Then we were given new Navy clothes to wear. We got hot coffee and they put us in someone else’s sack to rest. They did a great job.”

What was left of the crew of the Fiske was sent to Newfoundland to a hospital for another week’s recuperation before the individual sailors returned to the Boston Receiving Station where they were given a month’s leave.

Schulz returned to Boston to the Receiving Station before being sent to Long Beach, Calif. He went aboard the USS Gardiners Bay, AVP-39, a small seaplane tender. The new ship kept Martin Mariners, twin-engine flying boats in the air.

He arrived at a small island off Okinawa while the battle was still raging. He said. They never saw any Kamikazes during the final big battle of World War II. 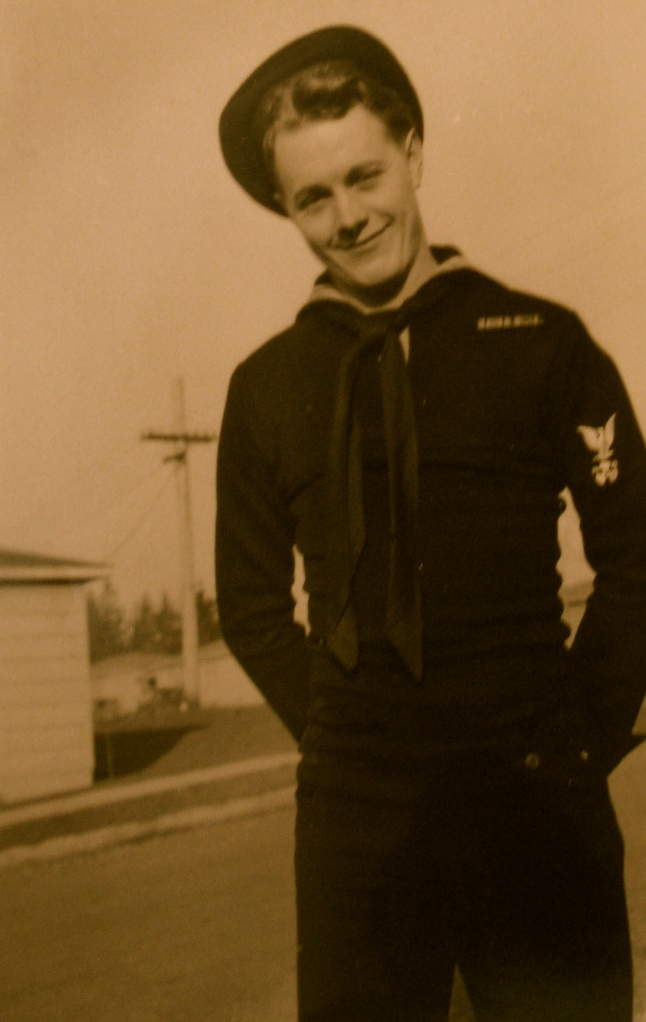 This shot of Schulz was taken just after the war, note the battle ribbons on his blouse. Photo provided

“When they dropped the atomic bomb we were in the Pacific off Okinawa roaming around,” Schulz said. “I remember going through a typhoon before we headed for Tokyo Bay with the Third Fleet.

“We were in the bay with scores of other American ships. However, we were far away from where the surrender ceremony was taking place aboard the USS Missouri,” he said. “We did go ashore after the surrender was signed and met a middle-aged Japanese man who had been educated in the U.S. He invited us to dinner at his home on several occasions. He had little charcoal pots he cooked the dinners on. They were wonderful dinners.”

Early in January 1946, he returned to the USA. Schulz sailed for the States aboard the USS Mackinac, APV-13, and arrived in Long Beach a week later.

“I took a troop train back to Sampson, N.Y. , where I had taken my basic training, and was discharged from the Navy. By then I was a Motor Machinist Mate 3/Class.”

For the next seven years he worked for a company in Erie, Pa. where he grew up, that made steam shovels. By then he and his wife had saved enough money to buy a small beer distributorship in Erie they owned and operated for 25 years until retiring in 1979 and moving to Port Charlotte.

This story was first published in the Charlotte Sun newspaper, Port Charlotte, Florida on Monday, Aug. 27, 2012 and is republished with permission.