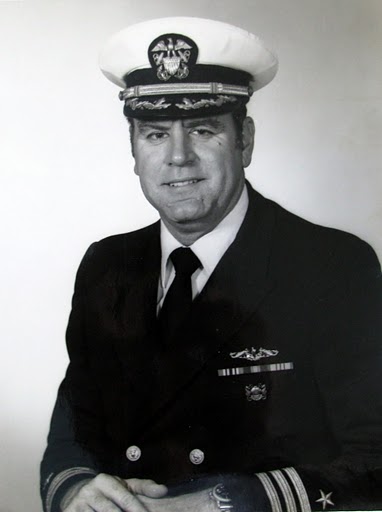 Arthur Anderssen as a commander in this formal Navy picture. Photo provided

“I wanted to be a flyer, but my eyes wouldn’t let me. I didn’t have 20-20 vision required to be a pilot,” the 70-year-old retired Navy captain explained. “So I applied for the Submarine Service and was accepted.

“I didn’t have much interest in the Navy’s nuclear submarine program. Nuclear subs were few and far between in those days. Qualified nuclear officers were very scarce. So I sailed on a conventional diesel sub,” he said.

“I sailed out of San Diego aboard the USS Charr, a World War II vintage submarine. She was named for an Arctic fish,” Anderssen explained. “During my time on the Charr the Vietnam War escalated and we were sent to the Tonkin Gulf. Our job was to rescue downed pilots.

“We picked up one guy, a squadron commander, who got shot down and crashed into the Gulf. I can’t remember his name, but we brought him back to Subic Bay in the Philippines. We had a big party with the members of his squadron. The sad thing about his story is that on his next mission he was shot down a second time and killed.

“After serving three years aboard the Charr I was transferred to the USS Blue Gill, another World War II era submarine, that sailed out of San Diego. During the time I was on the Blue Gill I took a military assistance tour,” Anderssen said. “We went on operations with the Korean Navy, Philippine Navy and the Australian Navy. Operating with foreign navies was an interesting experience. We got to see some unusual ports.

“At the end of his tour on the Blue Gill my mom, who lived in St. Petersburg, became ill. I asked the Navy if it had any jobs I could do anywhere near St. Pete so I could be near my parents,” he said. “They came through with a job at Strike Command at MacDill Air Force Base in Tampa. This was the outfit that ran all the wars in the Middle East.

“I worked for Strike Command from 1967 to 1969. It was very interesting working with the Army, Air Force, Navy, Coast Guard and Marines all in one command. During that period my mom died.

Anderssen while serving aboard the USS Charr during his first tour of duty in a World War II vintage diesel submarine in the 1960s. Photo provided

“I decided if I was going to stay in the Navy with my family I didn’t want a career where I went to sea for months at a time. So I applied to become an engineering duty officer which entailed going to graduate school. I was accepted at MIT. Three years later I graduated with an advanced degree in Naval Engineering,” Anderssen said.

“On my first tour after graduation I ended up in Norfolk Naval Shipyard which is actually located in Portsmouth, Va. This was a facility capable of nuclear refueling. My job was the repair of nuclear submarines,” he said. “The thing you notice working in the nuclear community is how much more rigorous it is. You had to be very careful because an error could result in a nuclear catastrophe.

“After three years at Portsmouth my wife and I ended up in Guam. The island was 30 miles long and 10 miles wide at its widest point. We enjoyed it. We were there from 1975 to 1977,” Anderssen said. “Because I had gone to diving school one of my duties at Guam was to be in charge of the decompression chamber. It was our job to treat all diving accidents both military and civilian involving divers suffering from the bends. Because I was the diving officer I had to be there when someone was treated. So I was called out all all hours of the day and night.

“Much more interesting was surviving Typhoon Pamela that hit the island in 1976. It had 200 mph winds.The elongated eye of the storm took two hours to pass over Guam,” he said. “We ended up with boats that had been in the harbor being pushed up on shore. Then, during the second half of the storm, they were blown back across the harbor, hit other boats and sank.

“The other thing that happened on Guam while I was there, the last Japanese soldier walked out of the jungle and surrendered 30 years after the end of the World War II,” Anderson recalled. “They took him back to Japan and celebrated.

“After Guam I was moved to the Charleston Naval Shipyard. By that time I was a lieutenant commander and spent most of my time there as the Quality Assurance Officer.

“We liked Charleston and wanted to retire from the Navy at Charleston. So I agreed to make a hardship tour to Saudi Arabia in 1988. That meant your family couldn’t go with you.

“I spent a year as an advisor to the Royal Saudi Navy,” he said. “It was an interesting tour for me because I got to see how modern technology transferred to the Saudi Navy. It was a cultural as well as a technical experience. I was constantly traveling from naval base to naval base.

“Their navy is a technical nightmare. They got many of their ships from other countries. We provided them with 200-foot long patrol boats and boats that were a little longer that had guided missile capabilities. They also got ships from the French, British, Spanish and Germans.

“Their culture is very different than ours. In most instances over there it was the foreign workers who were expected to take care of the disagreeable jobs,” Anderssen said. “It was a challenge to get the Saudis to do any maintenance work. It was below them.

Arthur and his wife Shari Anderssen are pictured at their retirement party in Charleston, S.C. in 1988. Photo provided

“After a year in Saudi Arabia I returned to Charleston where I served out the remainder of my 26 years in the Navy, I retired as a captain.” he said. “Then I spent the next five years being a civilian contractor working as the supervisor of a shipyard in Saudi Arabia. My wife didn’t like it much over there.

“My career in the Navy didn’t have any hero stuff like a lot of other servicemen,” Anderssen said.

“After we returned from Saudi Arabia we bought a 40-foot Endeavor sailboat and spent the next three years sailing up and down the East Coast and to the Bahamas. We got tired of running from hurricanes and put the boat up for sale. We sold it in two days for what we were asking.

“That’s when we bought this place in Burnt Store Isles. We moved in just before Christmas of 1996.”

This story was first printed in the Charlotte Sun newspaper, Port Charlotte, Florida on Monday, June 13, 2011. It is republished with permission.