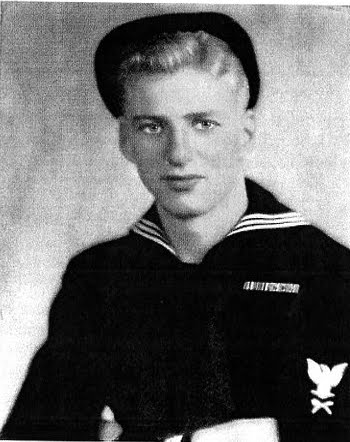 This was Seaman Howard Halsey at 19 about the time he graduated from boot camp at Bainbridge, Md. in 1943 during World War II. Photo provided

Seaman 3rd Class Howard Halsey was a 20-year-old assigned to a 20-millimeter anti-aircraft gun on the destroyer USS Kimberly off Tarawa, a tiny island in the Central Pacific.

It was Nov. 20, 1943, and U.S. forces needed the three-mile-long atoll and its runway for land-based bombers during the invasion of the Mariana Islands that was to come.

“The Kimberly was 1,000 yards off the beach firing its five, 5-inch main guns at the enemy. The Japanese were in bunkers protected by 6 to 8 feet of palm logs. Five hundred pound bombs from Navy planes didn’t disturb them,” the 83-year-old former sailor said.

Tarawa was the second offensive island invasion by U.S. Marines after a successful taking of Guadacanal five months earlier.

Although the Allied invasion force was overwhelming, there were some critical mistakes made. This was the last Pacific island invasion where Underwater Demolition Teams (frogmen) weren’t sent in first to scope out submerged obstacles and blast a path through these obstructions for landing craft.

To make matters worse, when the first contingent of Marines headed toward the landing beach in Higgins Boats, their landing crafts got hung up on submerged reefs. It was low tide!

“We watched as Japanese gunners picked them off from shore. There were bodies floating in the water,” Halsey recalled more than 60 years later.

Although he was at general quarters behind his 20-millimeter anti-aircraft gun on the Kimberly, he had little or nothing to do. Halsey had a front-row seat watching Marines trying to duck a barrage of machine-gun fire as they waded in waist-deep water toward the enemy beach too far away.

“I saw a Navy plane get shot down over the island. It crashed into a gun emplacement and exploded,” he said. “Tarawa was suppose to take one day. It continued for four days.”

By then all but 17 of the 2,600 Japanese defenders had been killed, along with another 2,200 Japanese and Korean civilian workers.

The Marines lost about 1,000 men. Another 2,200 more were wounded. The public back home was distraught about the losses of American lives while capturing such a small island.

As Halsey said, “It was a nothing island.”

War planners thought this sandy speck in the Pacific was important as a bomber base. Three months later the Marines would capture Iwo Jima and lose more than six times as many men killed and wounded for the same reason — a forward base for U.S. B-29s bombing Tokyo. 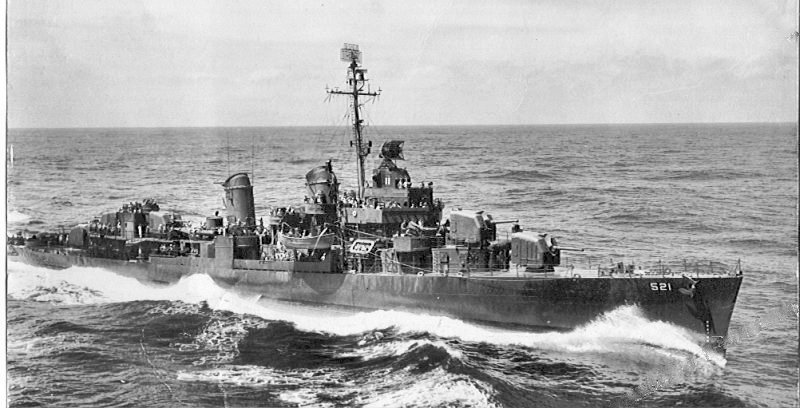 After Tarawa, Halsey and the USS Kimberly sailed on to Makin, the second island in the Gilbert and Marshall Island Campaign.

When he originally enlisted in the Navy in Philadelphia, he had, in his opinion, what he considered the best job in the Navy.

“I was a carpenter’s mate on an all steel ship,” Halsey said with a grin. “I was supposed to be in charge of damage control with some 4-by-4 wooden posts and some wooden plugs to plug holes in the side of the ship.”

He didn’t last long in that position.

The captain soon found out he was the best shot aboard ship on a 20-millimeter gun.

“Our skipper, Cmdr. Harry Smith, who graduated from Annapolis in 1930, was the finest man I ever saw in my life,” Halsey said with conviction. “He was compassionate, understanding and military, too. He was tremendous.”

At Makin the Kimberly was on picket duty. On picket duty a number of destroyers circled the fleet trying to keep Japanese submarines from sneaking through the screen and torpedoing U.S. aircraft carriers. They were only partially successful.

“I saw this huge explosion about half-mile away. It was the first time I had ever seen a ship hit by a torpedo. The Liscombe Bay, a carrier that had been converted from a tanker, was torpedoed, and our destroyer was one of the ships suppose to be protecting it,” Halsey said.

Some 646 men were killed in the explosion aboard the small aircraft carrier on Nov. 24, 1943. Adm. H.M. Mullinix and 272 crew members were rescued.

A few days later the Kimberly was sent back to Pearl Harbor and reassigned to the North Pacific.

“We were sent to the freezing cold waters of the Aleutian Islands off Alaska. From there the Kimberly, four other destroyers, two heavy and two light cruisers went on to the Okhotsk Sea and the northern Japanese Home Islands,” he said “We were the first American ships to bombard the Japanese mainland.”

It was about this time Halsey and 19 other sailors in the fleet were to become an officer and a gentleman. He was sent to the states for schooling, but decided it was not for him.

He was reassigned to Guam; on the way over he injured his leg. Halsey remained in Hospital #18 in Guam for months. The Navy eventually made him a corpsman. He began by giving shots to a bunch of battle-hardened teenage Marines wounded on Iwo Jima.

It was there he learned that his former destroyer, the USS Kimberly, had been hit by a Japanese Kamikaze suicide pilot.

“Some 25 of the Kimberly’s sailors were killed and 33 of them wounded. They ended up in the other base hospital on Guam, Halsey said. “I drove over to the hospital and found my best friend, Sweeney, who was a gunner’s mate, swathed in bandages. He had been badly burned, but survived.”

When the war ended, Halsey was on Guam. He returned to the States, got married, and he and his wife, Jo-Anne, had three children, Jo-Anne, Judith and Howard Jr.

Howard Halsey holds a picture of his older brother, Samuel, who at 21 went down with the troop transport USS Dorchester. The ship was torpedoed during World War II. Sun photo by Don Moore

He became a teacher and taught vocational history, math and drafting at Anderson High School in Westchester, Pa., from 1950 until 1978.

During this period he took sabbaticals from teaching and worked construction for the Presbyterian Church. He was sent around the world to work on building sites. He and his wife went to Africa and built a home and the bell tower on a church for a native pastor; they built homes in Guatemala after an earthquake and an eight-story outpatient clinic in South Korea.

After he retired from teaching school, he and Jo-Anne moved to Naples. After her death on Oct. 29, 2000, he relocated to Arcadia.

This story first appeared in the Charlotte Sun newspaper, Port Charlotte, Fla. on Sunday, Oct. 1, 2006 and is republished with permission.