Bill Stevens, left, and his brother, Bob, are pictured during Christmas 1942 at their home in Framingham, Mass, shortly after they joined the Coast Guard. Photo provided

Bill Stevens of Deep Creek near Port Charlotte, Fla. was a member of a four-man Coast Guard crew on a plywood “Higgins Boat” that transported Marines and soldiers to South Pacific beaches during five major invasions in World War II.

The 84-year-old former 2nd class motor mechanic took part in the invasions of Kwajalein, Guam, Peleliu, Leyte and Luzon. He was part of the crew of the USS Aquarius, an assault cargo ship that carried 300 servicemen, their equipment, 24 Higgins boats and eight larger steel LCM landing craft.

“Leyte was the closest I came to getting killed,” he observed more than six decades later.

“One of the circle of ‘Higgins Boats’ had broken off into a horizontal line and was moving toward Red Beach. The invasion had begun,” Stevens wrote in Hit the Beach,” the story of his WWII experiences written for his family.

“The first shell landed directly in front of our boat on the left. The second shell threw a gigantic water spout up ahead of our port bow. The third one landed just a few feet directly ahead of us, churning the water and sending bits of hot shrapnel flying in all directions. I figured the next shell would drop right into the middle of our plywood craft.

“Suddenly, there was a muffled explosion and the entire ramp and bow of Boat 18, beside us, disappeared in black smoke. The stricken craft stopped dead, as though it had hit a stone wall, and sunk,” he wrote.

Stevens and his crew couldn’t stop to pick up survivors. They had 36 soldiers to deliver to the beach dead ahead. He and his buddies learned later the crew of the sunken “Higgins Boat” survived.

“The rain of mortar shells continued. Farther down the line, another muffled blast and the thick smoke showed a third boat had been hit. Suddenly we were racing for the white sandy beach and the dark green jungle just beyond.

“The heavy spoon-shaped bow slammed into the hard-packed sand and slid forward a few feet. I released the cable and the big steel ramp hurtled down onto the beach. I waited for the soldiers to charge out of our ‘Higgins Boat’ onto the beach, but the enemy rifle fire was so intense they were frozen in position inside the boat.

“‘Hit the beach!’ the words tore spontaneously from my throat. Almost as one they rose, charged across the ramp and dived into a hug shell hole at the foot of a palm tree,” Stevens wrote.

As rifle and machine-gun fire from the Japanese hiding in the jungle reached a crescendo, the landing craft backed its bow off the beach in a hurry, spun around in shallow water and headed as fast as possible back toward the fleet miles offshore.

On their second trip to Leyte Beach, Stevens’ boat brought a field gun and ammo to shore. This time, Japanese gunners had been dislodged and didn’t pose too much threat to incoming “Higgins Boats.” 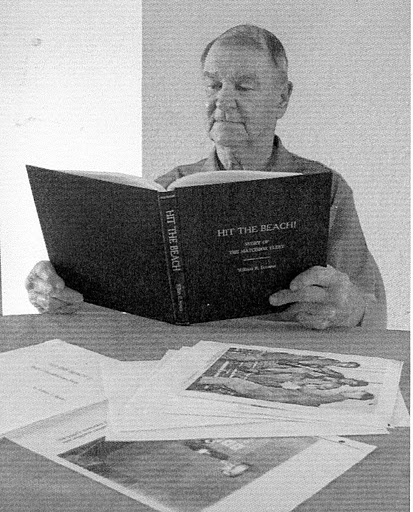 Bill Stevens at Hit the Beach, a book he wrote for his children and grandchildren about his experiences in World War II in the Pacific Theater of Operations. Sun photo by Don Moore

As they headed out to sea once more, another landing craft passed them by at a fast clip, heading toward shore.

“Sitting at the stern of the boat was Gen. Douglas MacArthur, wearing dark glasses with a corncob pipe clenched in his mouth,” Stevens wrote. It was from that beach at Leyte a few minutes later the Supreme Allied Commander in the South Pacific broadcast by radio to Filipinos, ‘I have returned!'”

This story was first published in the Charlotte Sun newspaper, Port Charlotte, Florida on Thursday, March 26, 2009 and is republished with permission.