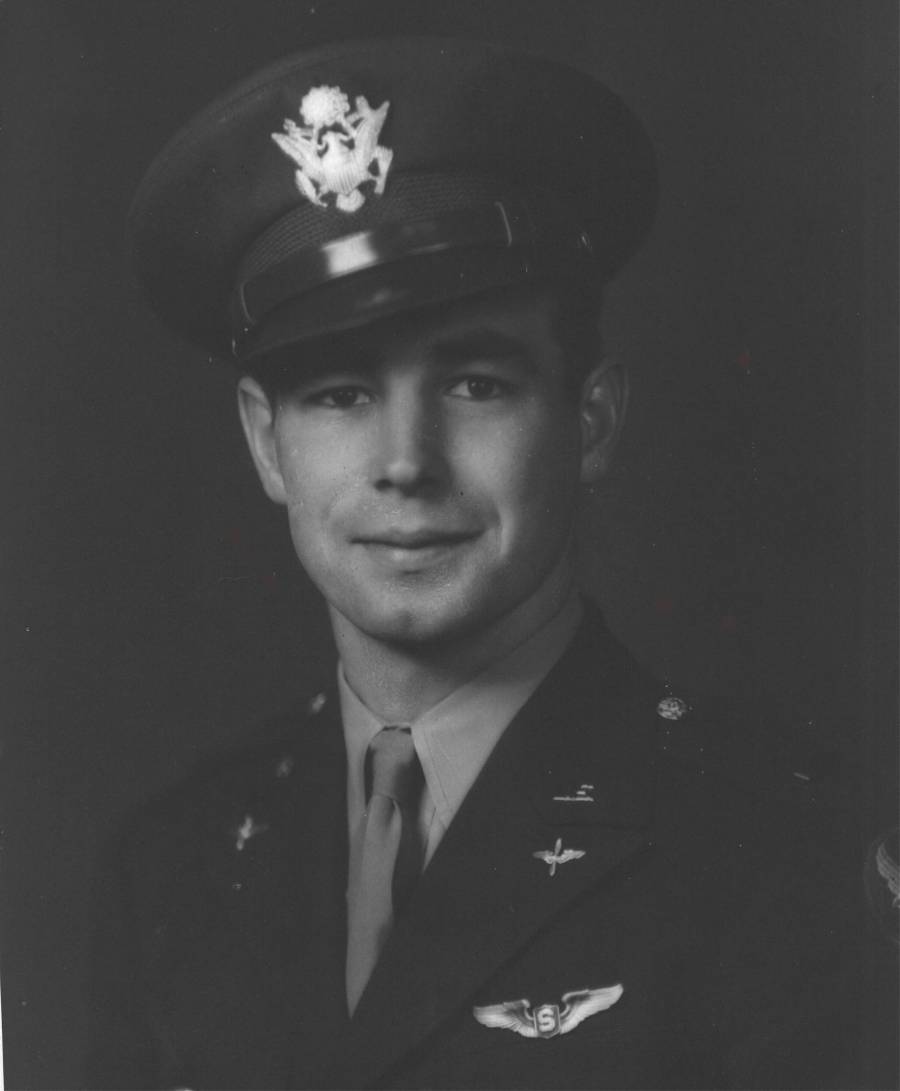 2nd Lt. Ken Stetson of Englewood is pictured when he graduated from flight school and received his wings during WW II. He flew a B-29 bomber on 30 combat missions over Japan. Photo provided

1st Lt. Ken Stetson, was at the controls of a B-29 “Superfortress” the crew named “Tanaka Termite” when it was attacked by Japanese fighter planes while flying in formation over Mount Fuji on their first of 30 combat missions to Japan.

The picture of their squadron with Japan’s most famous mountain below them was published in Life magazine.

“That first mission was frustrating and scary for the crew. Jap fighters put a slug in my central fire control system and knocked out all my machine guns. We couldn’t fire back at the enemy fighters attacking us,” Stetson said.

“Our first mission was to Nagoya on Dec. 18, 1944. That first flight was 13 hours and 50 minutes,” the 90-year-old former bomber pilot who lives in Englewood, Fla. explained while looking at his flight log. “It was a high altitude mission. We bombed the target at 28,000 feet. There were 50 B-29s in this flight. By the time I left Japan in May 1945 we were flying 500 bombers on a single mission. 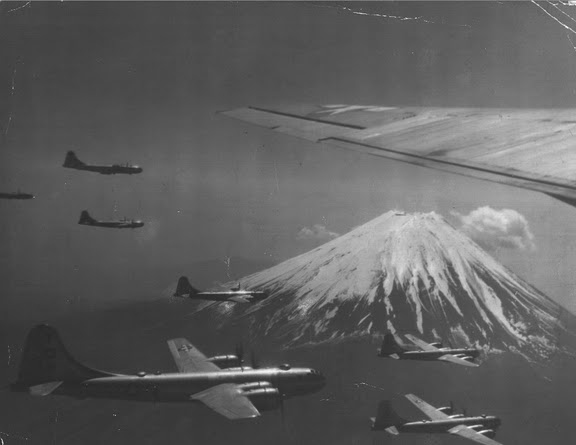 This shot of Stetson’s squadron flying over Mount Fuji after bombing Nagoya, Japan on Dec. 18, 1944 is the one that appeared in Life. His plane lost all its machine-guns when its fire control system was shot out by Japanese fighters. Stetson’s B-29 is the third one back from the center. Photo provided

“Right after we lost all our guns on that first mission the rest of the squadron formed around us and tried to protect us from the enemy fighters. The bombers stayed with us until we reached the coast and then we were on our own.”

It was at this point that the Japanese fighters broke off their attack on the B-29 squadron and headed back to base. The thing Stetson and the crew of “Tanaka Termite” had going for them was that all four of the heavy bomber’s engines were working flawlessly.

During the flight back to their Saipan base, more than 600 miles off the Japanese coast, the crew had to figure a way to close the bomb bay doors that malfunctioned and remained open after dropping their bombs.

“I got down low enough so my guys could manually crank the bomb bay doors closed,” Stetson said. “With the doors closed the drag on the airplane stopped on the remainder of the uneventful flight back to Saipan.”

Like most B-29s in the 20th Air Force, their plane had a pretty girl painted on its nose. Its name came from Charley Pound, their copilot, who Stetson said was the educated crew member.

“Tanaka was the Jap diplomat who was talking with American Ambassador Cordell Hull in Washington when the Japanese bombed Pearl Harbor,” he explained. “So we called our plane the “Tanaka Termite.” 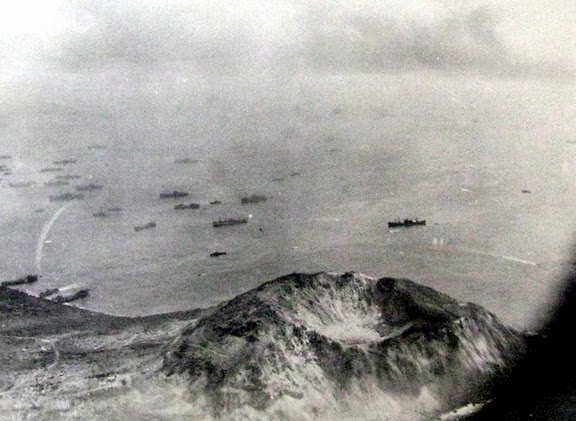 One of Stetson’s crew took this shot of Mount Suribachi on Iwo Jima during the American invasion of the Pacific island shortly after Feb. 19, 1945. Photo provided

Stetson recalled another mission aboard the “Tanaka Termite” that was almost the crew’s undoing.

“Because my navigator gave me a wrong course we flew off the Japanese coast into the wide Pacific on a return trip. On our RADAR we saw what looked like a land mass in front of us we thought was Saipan. What we were looking at on the scope was Adm. “Bull” Halsey’s fleet on its way to Okinawa,” Stetson said.

“I had to do a 90 degree turn and hope we were headed for Saipan. Our fuel was so low I got the crew started making plans to lighten our load,” he explained. “At that point I visually picked up Saipan. It was a wonderful sight. I cut into the traffic patter of B-29s and landed.

“As we were landing I lost one engine from lack of fuel. I lost my second engine as we touched down. I still had two engines and enough power to get us to our hard stand where we parked our plane. When we put a stick in the gas tank it showed no fuel,” he said. 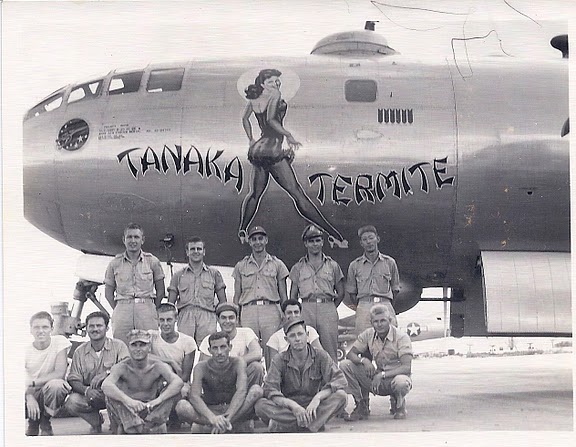 The crew of “Tanaka Termite” in front of their B-29 heavy bomber. Ken is the fellow in the center in the back row. The picture was taken on Saipan – their base of operations during the war. Photo provided

Bombing missions over Japan were not very successful until Gen. Curtis Lemay became commander of the 20th Air Force that brought the air war to the Japanese. Till then Stetson and his fellow pilots were having little luck bombing the enemy from six miles high. Much of the time they couldn’t even see the designated target because of the overcast that blanketed the target area much of the time. Then there were the 200 mph head winds they had to cope with that made high altitude bombing extremely inaccurate.

He received the Distinguished Flying Cross for the five fire bomb raids he flew over Japan during the closing months of World War II.

“The heroes of these raids were the guys who flew out before us during the day and dropped the first fire bombs on Tokyo, Nagoya and Osaka to mark our path. Then we flew over these cities at night and bombed,” Stetson said.

“When we started fire bombing their cities I thought we had them beat. When I got home and heard about the big one we dropped on them I knew it was all over for the Japanese,” he observed more than 65 years after the first atomic bomb was dropped on Hiroshima.

Stetson flew his last mission on May 27, 1945. His longest was his last, some 18 hours in the air. It was a “milk run” to collect weather information for bomber command. 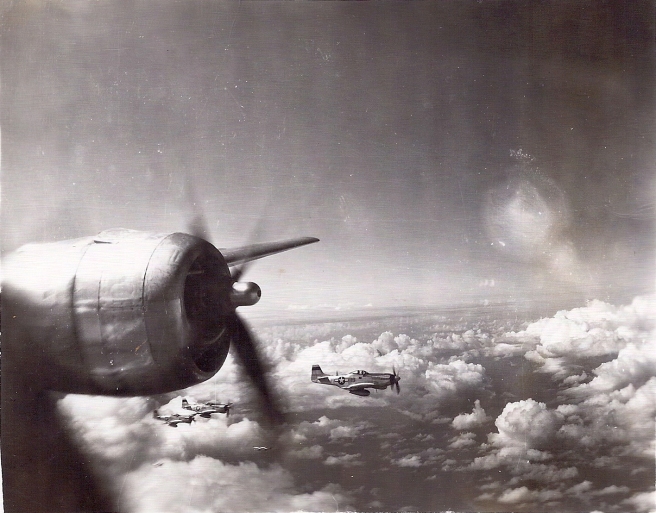 A trio of P-51 “Mustang” fighters accompany “Tanaka Termite” and the other B-29s in Stetson’s squadron to and from their targets over Japan during WW II. Photo provided

After 30 combat missions the crew of “Tanaka Termite” headed home. Stetson took a plane from Saipan to Honolulu and from there to Canada he went by troop transport.

He started working for TWA flying as copilot until the airline went on strike. After that he took the G.I. Bill and went to the University of Minnesota. For 10-years he worked for Honeywell and then decided to join Lair-Ziegler that manufactured flight control equipment. He worked there for a decade until taking early retirement.

For the last 35 years he and his wife, Pat, have been in the real estate business both in California and Florida. Nine years ago they moved to the Englewood area to get away from California’s polluted air.

This story was first printed in the Charlotte Sun newspaper, Port Charlotte, Fla. on Monday, Sept. 26, 2011 and is republished with permission.