This was Pfc. Vito Mancine, who now lives in Port Charlotte, immediately after World War II. Note the Combat Infantryman’s Badge on his chest (long rifle and wreath) that indicates he has seen battle. Photo provided

This was Pfc. Vito Mancine, who now lives in Port Charlotte, Fla., immediately after World War II. Note the Combat Infantryman’s Badge on his chest (long rifle and wreath) that indicates he has seen battle. Photo provided

Pfc. Vito Mancine of Port Charlotte, Fla. was a 21-year-old Browning Automatic Rifleman when he landed in Normandy, France, about a month after D-Day, June 6, 1944. He was a member of the 5th Division in Gen. George Patton’s 3rd Army.

His unit was often pinned down by the Germans as it fought through the hedgerow country and took part in the breakout at Saint-Lo a few weeks later.

“We replaced the English’s 1st Infantry Division at Saint-Lo. We lost a lot of men killed and wounded there,” the 86-year-old former BAR man explained. “In my squad there were 12 men before the attack, but only four remained after. Our company lost all but 66 men out of more than 180.”

Patton and his army advanced to Cherbourg and the Cherbourg Peninsula before turning east and heading toward Verdun, the site of the biggest battle on the Western Front during the First World War. It was there that 755,000 French and German soldiers were wounded and killed in 1916.

“The day I got wounded, the 5th Division was attacking with tank support. When German bullets went over our heads, they sounded like a whip cracking,” Mancine recalled. “We got orders to fall back, and it was during the fall back I got shot in my left thigh.

“I collapsed and my BAR hit the ground. I tried to stand up, but fell back down again. I don’t know how long I laid out there in a field in front of our lines before two of my buddies came and got me,” he said. “They carried me back to our lines in a shelter half. I was taken to a field hospital and give five pints of blood while they operated on my leg. Then I was transported to Paris and flown from there to England aboard a transport plane filled with wounded soldiers. I spent three and a half months in the hospital recovering.”

Mancine returned to the 5th Division just in time for the Battle of the Bulge, the biggest battle on the Western Front during World War II. More than a million men fought for a month during the worst winter in Europe in half a century.

“It was December 1944, cold and snowing. Our division was in Germany, but Gen. Patton turned the 3rd Army around and we headed back in trucks to Belgium and the crossroad village of Bastogne,” Mancine said. “We took up our positions on a wooded ridge overlooking the Saar River.

“This one night we got word we were going to attack across the river into German territory at 3 a.m. They brought all these steel boats up on the ridge. Because there was so much snow on the ground, we skied the boats almost down to the river on the snow,” he said.

“Then the Germans opened up on us with their 88s (cannons) and machine-gun fire. So we decided not to cross the river at that time and waited until daylight. We left the boats along the river on our side and withdrew back to the cover of the trees at the top of the hill. The next morning, our artillery bombarded the Germans and we made it across the Saar without further incident.”

They dug foxholes in the almost impenetrable frozen ground on the other side of the river, waiting for the Germans to counterattack.

“It was still cold, and me and my buddy were in a forward listening post foxhole when all hell started breaking loose as the Germans shelled us and machine-gunned anything that moved,” Mancine said. “I could hear a guy in another foxhole who had been hit calling for his mother. I don’t know whatever happened to him.

“The next night, our squad went on patrol. I was the third guy in line in the patrol when the Germans started shelling us again with 88s. One incoming shell killed the first two guys in line and knocked me down and out. When I came to, I told the medic who was working on me that my back was killing me.”

Mancine remained all night with his buddy in the foxhole that had a half-foot of water in the bottom, listening to the sounds of war. At one point the former private said they could hear tanks coming their way, but couldn’t tell if they were American or German.

The next morning, Mancine’s back was bothering him so much he went in search of an aid station and medical help.

“They looked at my back and found nothing, but during their inspection they asked me to take off my boots. When I did, it was obvious I had trench foot,” he said. “Medics told me I would have to go to the hospital again and be treated for the problem.”

Mancine was taken to the field hospital for the ailment, caused by the damp, unsanitary and cold conditions, and from there he was flown back to England. He spent the next three months recovering from his foot problems.

“When I returned to the 5th Division in Germany, it was mid-May and the war in Europe had just ended. Because I had 85 points I returned to Le Havre, France, and Camp Lucky Strike, and from there took a boat back to the states,” he said.

The Americans fighting in both the European and Pacific theaters of operation were sent home after the war based on a point system. The soldiers with the highest number of points returned home first.

Mancine ended up at Fort Campbell, Ky. He was given a 30-day leave and went home to Williamsport, Pa. He had returned from his furlough and was about to be shipped to the Pacific when the Japanese unconditionally surrendered in August 1945. He was immediately discharged. 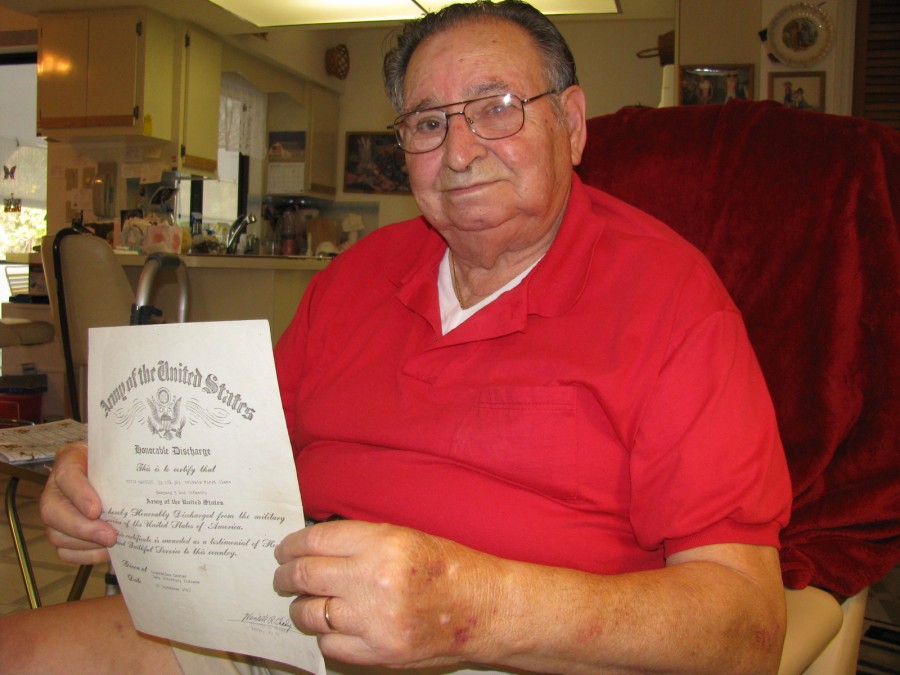 At 86 former infantrymen Vito Mancine looks at his discharge paper that notes that he served in the 5th Infantry Division in Europe as a member of Gen. George Patton’s 3rd Army. Sun photo by Don Moore

Eventually, Mancine joined the Williamsport Police Department, where he worked for eight years until going to work for the U.S. Postal Service, from where he retired. He and his wife, Mary, have lived in Port Charlotte for 22 years. They have four children, three daughters and a son. On July 30, (2010) the couple will celebrate their 65th wedding anniversary.

Pfc. Vito Mancine of Port Charlotte received a Purple Heart after being shot in the thigh in France. He was also awarded the European Theatre Ribbon with five battle stars for participating in five major battles, including Saint-Lo, France; and the Battle of the Bulge in Belgium.

This story first appeared in print in the Charlotte Sun newspaper, Port Charlotte, Fla. on Monday, Jan. 18, 2010. It is republished with permission.