Quartermaster II Albert Reale presents Capt. Hilmal Grimm with a piece of the pendant from LST-1122 he skippered in the Pacific at the close of World War II. Photo provided

What Albert Reale of Port Charlotte, Fla. remembers most about World War II are not the battles, but the typhoon that ravaged Okinawa during the final weeks of the war.

All the ships in Buckner Bay, off Okinawa, were ordered to sea before the typhoon hit, the 86-year-old former sailor said recalling the storm more than 65 years later. Reale was at the wheel of LST-1122 during much of the blow as he fought to keep the battered supply ship from foundering in the turbulent sea.

It was June 3, 1945 and Task Group 38, that included the carriers Hornet and Bennington and the rest of their battle fleet, was returning from a two weeks attack of Kyushu, the southern-most Japanese home island.

Its 115 mph winds swept over the task force beginning at 7 a.m. and damaged every ship in the formation. The heavy cruiser USS Pittsburgh lost her bow in the storm. The carrier USS Belleau Wood had an elevator damaged. The destroyer USS Samuel N. Moore sustained major superstructure damage. Both escort carriers USS Windham Bay and USS Salamaua had sections of their flight deck damaged.

“I was steering our LST through the typhoon. I could see our bow quiver in the storm,” Reale said. “I thought our bow was going to fall off. Waves 40 to 50 feet high swept over the bridge. Then we’d crash down into troughs and roll around.”

LST-1122 serviced the typhoon and made it back to port.

When Reale first arrived at Okinawa the Marines had just secured the island. Most of the fighting was over.

“Just before the war ended kamikazes strafed our ship. That’s how we got our single battle star,” he said. “They’d fly in low every morning about 3 a.m. and attack us. We’d be called to battle stations.” 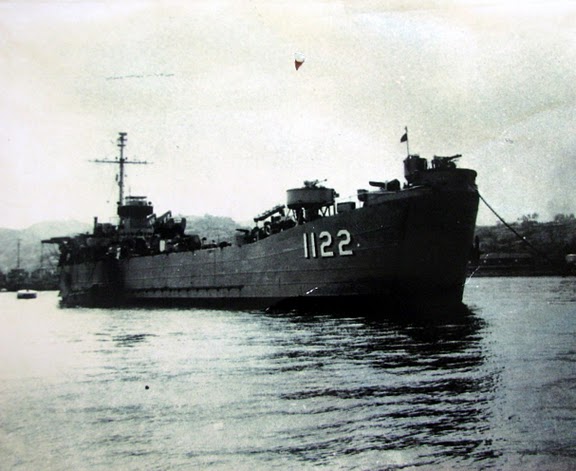 This is LST-1122 Reale steered through the typhoon that hit Okinawa just before the end of World War II during the summer of 1945. Photo provided

About the only thing the Japanese fighters accomplished was to damage the paint on the LST with their machine-gun bullets.

“While we were unloading supplies from our ship they told us we could go ashore. I went with a buddy. While we were on the beach at Okinawa I found a stake in the sand. Beside it someone had written on the beach: “100 ft. offset.” Reale recalled. “They told us before we went ashore the mine fields hadn’t been cleared and I thought the stake had something to do with the enemy mine field.

“I didn’t want to move and I told my buddy to go get help. He returned with a couple of Marine engineers who laughed at me. All it was, was a survey stake of some kind,” he said.

“We were on our way back to Pearl Harbor to pick up more supplies when it came over the ship’s loud speaker the war was over. Up till then we thought we were going to have to invade Japan,” Reale said. It was Aug. 14, 1945 when we got that announcement. There were a bunch of happy guys on our ship.”

An LST disgorges a tank on the beach. This is what these ships did best was transport troops and equipment to an enemy held shore. Photo provided

Before he became a quartermaster II class steering an LST in the Pacific, he had originally joined the Naval Aviation Cadet Program at the end of his freshman year in college at the University of Connecticut.

“When I was a cadet at the Naval Air Station in Peru, Ind. I cranked Ted Williams’ engine up on the Stearman biplane he was learning to fly,” he said. “He was a great guy and gave me three autographs I sent to my kid brother who lost all three of them.”

The greatest hitter that ever lived, some say, went on to become a Marine Corps pilot flying F4U Corsair gull-wing fighters in the Pacific during the war. He also flew fighters in the Korean War.

Reale washed out of pilot training and was so disgusted when the Navy offered to make him a navigator, he quit and went to sea serving as a quartermaster aboard ship.

After the surrender the LST he was on took a load of supplies to Sasebo, Japan on the southern island of Kyushu.

“We arrived in Sasebo Harbor right after the surrender was signed. It was a big, beautiful harbor and there were several other LSTs that brought supplies to the small village on the tip of the southern-most Japanese island,” he said. “The Japanese I met when we went ashore were very nice. They were mostly shop keepers.”

Reale and LST 1122 made several trips to Sasebo with supplies for the civilian community. On return trips their LST sailed the coast of Japan passed Hiroshima and Nagasaki.

“We were about a half mile or mile off shore and I was on the bridge looking at what was left of Nagasaki and Hiroshima through my binoculars. There wasn’t anything left of those cities,” he said.

“We also made a trip to Manila, Philippines. What I remember most about Manila was there were ships sunk in the harbor. All you could see were their masts. The city had been devastated during the war by both the Japanese and the Americans,” Reale explained. “I went to Sunday Mass. People were walking up the aisle on their knees.”

He and his LST returned to the States in March of 1946. With him came a boat load of happy Marines returning from the war. They sailed under the Golden Gate Bridge and landed in San Francisco without any fanfare. 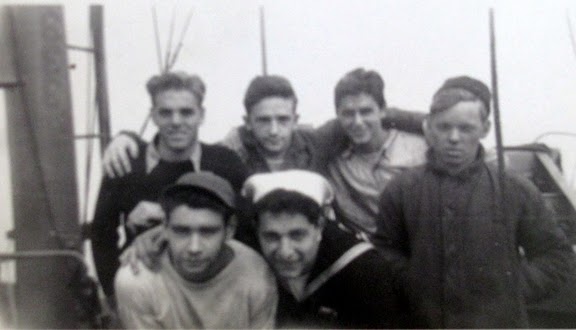 Reale and his buddies aboard LST 1122 during the Second World War. He’s the guy at the left in the back row. Photo provided

Reale was given a 30-day leave. He took a slow moving train across country for a week back home to New Britain, Conn. where his family lived. He still had a copy of the $32 train ticket that Uncle Sam paid for.

A short while later he was discharged from the Navy and returned to the University of Connecticut thanks to the G.I. Bill. He switched majors from engineering to business administration.

After graduation he initially went to work for John Hancock Life Insurance Co. for a few years. Then he joined Kemper Insurance where he worked for 30 years.

Reale and his wife, Teresa, moved to Port Charlotte in 1992 when he retired. The couple has been married 61 years and have 12 children: Lynn, Theresa, Daniel, Catherine, James, Margaret, Patricia, Albert Jr., Mary, Joseph, Ann and David.

This story was first printed in the Charlotte Sun newspaper, Port Charlotte, Florida on Friday, July 8, 2011. It is republished with permission.