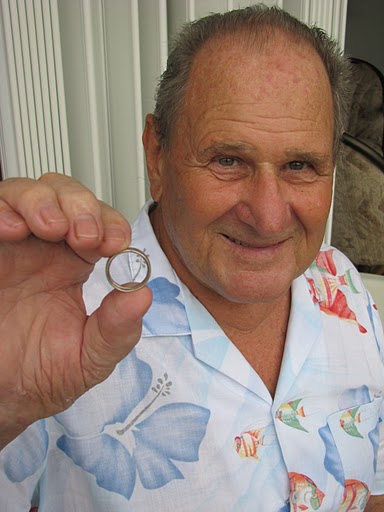 Warner Heinrich of Port Charlotte, Fla. holds a ring he made aboard a  Liberty ship while on the way to war in the Pacific 65 years ago. Sun photo by Don Moore

Warner Heinrich of Port Charlotte, Fla. was a Browning Auitomatic Rifleman who served in the 43rd Infantry Division in the Pacific during World War II. He saw action at Guadalcanal and Leyte in the Philippines.

What he remembers best about his time in the service during the second World War is making a silver ring out of a quarter while on a Liberty ship on the way to war.

“From San Francisco we took a Kaiser-made Liberty ship that probably made about six or seven knots into battle. It took us two weeks to get there,” the 82-year-old former GI recalled. “We had a lot of time to kill while on board ship. Somebody came up with the idea of all of us aboard ship making rings.

“We’d take a quarter, hold it on its edge on the ship’s steel deck, and pound the edge gently with a soup spoon while turning it around a little bit at a time. Pounding with the spoon rolled the edge of the quarter down and eventually turned it into a ring if you did it right,” Heinrich explained.

“If you hit the quarter too hard, it would squash the ring. Then you’d have to throw it away and start all over again,” he said. “We worked for hours and days on these rings.

“With 1,000 of us beating on these quarters with our soup spoons on a metal deck, the noise was terrific. There were only certain times in the morning and evening we could work on our rings,” he said. 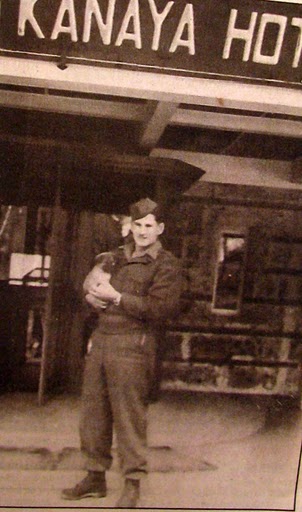 Warner Heinrich holds a pup he found while getting a little “R&R” in Japan after the war. The back of the picture is dated Dec. 12, 1945. It was taken when he was part of the occupation forces. Photo provided

Sixty-five years later, Heinrich still has the silver ring he made so long ago. It’s his prize possession from World War II.

“All the work I put into that ring, I had to keep it. I even wore it into battle,” he said.

Heinrich didn’t have much to say about the Battle of Guadalcanal. He remembers the Philippine invasion much better.

“We were out on patrol in the Philippines and I was carrying my Brown Automatic Rifle. My ammo bearer was right beside me with his boxes of ammo,” he said. “A Japanese machine-gunner opened up on us and killed my ammo bearer. A bullet from his machine-gun cut the top of one of my boots off, but I wasn’t scratched.”

Heinrich wasn’t as lucky a few days later when a Japanese mortar exploded nearby and shrapnel from the enemy mortar hit him in the back.

“I was in Manila when the war ended. We were told to stay out of a big house that was still in pretty good condition. We found out later it was Gen. Douglas MacArthur’s house. It had a big balcony that he paraded back and forth on where you could take a picture of him,” Heinrich said.

He and the other soldiers in the 43rd Division arrived in Japan right after the surrender as part of the occupation forces.

“The day after we arrived, a Seabee came through with a barracks bag full of cigarettes he was going to sell on the black market. He wanted someone to go to town with him, so I volunteered,” Heinrich said.

He was AWOL for more than a month.

“We sold all the cigarettes and went sightseeing around the countryside. When the money ran out, we went back to our units,” he recalled with a smile. “My company commander didn’t know what to do with me because we didn’t have a jail. I was put on restricted duty until they could figure it out.

“About that time, the 43rd was ordered to return to the States. Because I screwed up and went AWOL, I was shipped to the Americal Division that was still serving as part of the occupation forces in Japan. A short while later, that division went home and I was sent to a third division. I eventually made it home in 1946,” he said.