Sgt. Larry Earle of North Port, Fla. treated wounded soldiers on the Battle of the Bulge. The hard part was doing it at night in the dark. Photo provided 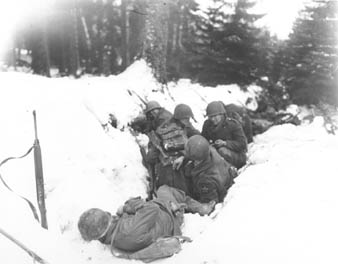 Members of the 2nd Infantry Division struggle to survive in the snow during the Battle of the Bulge. It was the largest battle on the Western Front in World War II. Photo provided

Combat Medic Sgt. Larry Earle was freezing his backside off in December 59 years ago.

He was hunkered down in a foxhole serving with the 2nd Infantry Division near Elsenborn, Belgium, when German tank units charged through deep snow and bitter cold in the Ardennes Forest, overwhelming unsuspecting Allied forces just before Christmas in what would become known as “Battle of the Bulge.”

Earle, now retired and living in Harbor Isles mobile home park in North Port, Fla., was a member of the 457th Medical Collecting Company. His unit of combat medics was assigned to American divisions fighting the Germans along the Western Front.

“We went where we were needed in the fighting in France, Belgium and eventually Germany,” the 78-year-old former medic said. He was looking at a map of the biggest battle involving U.S. forces during World War II in Western Europe. A total of more than a million soldiers clashed for almost a month in the Germans’ last major offensive.

“It was the coldest weather ever recorded in this part of Europe that December in Belgium,” Earle recalled. “We couldn’t get out of our foxholes except to treat a wounded soldier. We’d crawl out through the snow and treat the soldier as best we could and crawl back in our foxhole.”

It was no better for the Germans because of the bitterly cold conditions they all endured. However, the weather worked to the advantages of the Third Reich troops. It concealed their initial advance through the forest and also kept the Allied air power from attacking the advancing enemy soldiers.

“The first soldier I treated during the Battle of the Bulge was a tough case. It was at night. You can’t see, so you did everything with your hands. A piece of shrapnel from an exploding shell had hit him in the gut. As I was examining the soldier, my hand went right through his body. There wasn’t much I could do for him,” Earle said.

“I stuck his rifle in the ground so the medics that followed behind us could find his body.”

The day before Gen. George Patton and his 3rd Army arrived with his tank divisions and mechanized infantry that turned the tide in favor of the Allies, Earle and his 2nd Division stumbled on an incident in the snow he’ll never forget. Called the “Malmedy Massacre,” what the medic and his outfit discovered near the Belgium community were 158 Allied combat medics who had been machine-gunned to death by German storm troopers a day earlier. 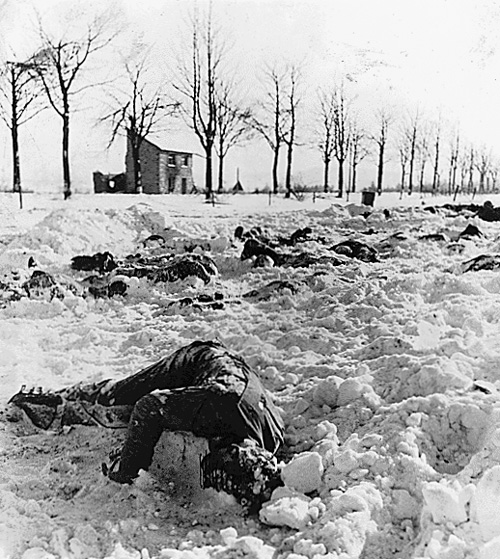 Executed American POW bodies are uncovered by US Army personnel in Malmédy, Belgium. The Americans were murdered by the Germans soldiers when they were captured in January 1945. After Malmedy, Americans took no prisoners. Photo provided

“We found the slaughtered medics in the deep snow near Malmedy,” he said. “By then, the Germans had captured a lot of American soldiers. They were in the process of taking this bunch of captured medics back to stockades farther behind the lines in trucks when they stopped. All the medics were forced to stand out in the snow as the SS soldiers gunned them down.

“A few survived by playing dead under the pile of their dead buddies,” Earle said. “The survivors let us know what had happened.

When Patton arrived with his tanks, the weather started to improve. The Air Force began attacking German ground forces again en mass. It wasn’t long before the Germans were retreating by the thousands.

A short time later, Earle found himself in a Belgium spa being treated for frostbitten feet. They worked on his feet for two weeks and then he returned to the 2nd Division. His division was beginning to advance into Germany. He was appointed the medical director of a small hospital at Lehrte, Germany. His primary job as head of the hospital was to see that American medical supplies reached the German doctors practicing there.

Several months later, the war in Europe was over. Because Earle had more than the 85 points needed to return to the States — accumulated through action in the field — he was stateside by early 1946. Like millions of others, he was discharged from the Army and went on with his life.

Earle received the Bronze Star medal, inscribed “Sgt. Lawrence Earl” on the back, for heroism in battle. He also received the Combat Medic badge for serving as a front-line medic under fire, the American Campaign Medal, Europe-Africa-Middle East Medal and World War II Victory Medal.

As the former Army medic sat at his kitchen table recalling the long-ago war, he said, “I did nothing more than any medic would do. I don’t want you to write that I was a hero. I wasn’t. I just did the best I could.”

This story was first published in the Charlotte Sun newspaper, Port Charlotte, Florida on Friday, Dec. 26, 2003 and is republished with permission.