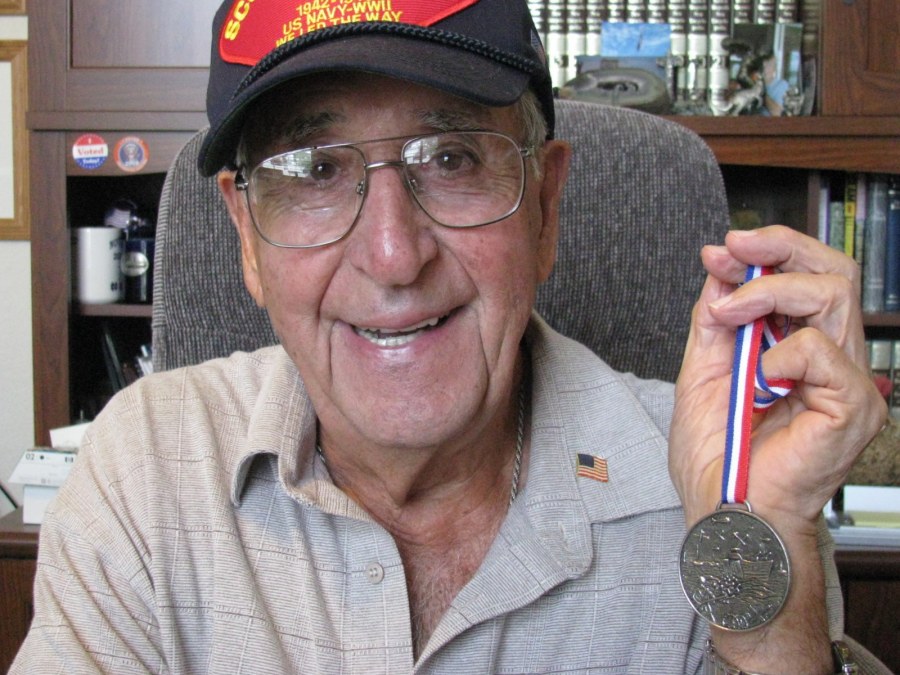 Art Nicholas of Englewood, Fla. holds the medallion he received over there for taking part in the Normandy Invasion on D-Day in which 175,000 Allied forces stormed the shores of France during World War II. Sun Photo by Don Moore

His dark blue ball cap with the orange patch and gold lettering read: “SCOUTS AND RAIDERS, 1942-1945, U.S. NAVY WW II, WE LEAD THE WAY.” It was what Art Nicholas of Englewood, Fla. wore when he, his wife and two grown daughters visited all five beaches in Normandy, France on the 65th Anniversary of the D-Day Invasion during the summer of 2009.

They went to England for two weeks to visit his wife, Hazel’s, father who is 99. While there the family spent two days touring the five invasion beaches along the coast of Normandy where tens of thousands of Allied soldiers stormed ashore to wrest Europe from Adolph Hitler and the Nazis a lifetime ago.

Before serving as boatswain’s mate 1st Class aboard LST-52 (Landing Ship Tank) that brought troops and supplies into Gold Beach, where the Canadian soldiers landed along the coast of Normandy that historic day, June 6, 1944, Nicholas had already taken part in the Invasion of North Africa. He served on a cargo ship during the first invasion. Then he helped found the Scouts and Radars School in Fort Pierce that trained Underwater Demolition men during the Second World War and Navy Seals today.

The family hired their own driver and a van and spent two days checking out the invasion beaches.

“We went to Utah Beach first. One of the guides on duty there saw my hat and said, ‘Come with me. You have to sign the register,’” the 87-year-old Englewood man explained. “When I registered at the reception desk they presented me with a silver medal, American and French flags and a Diploma that said I had taken part in the D-Day Invasion on one of the Normandy beaches on June 6, 1944.”

The silver medallion Nicholas was given is a little larger than a silver dollar. On the front side it shows an LST discharging a boatload of soldiers while airplanes fly overhead. The flip side reads: “In recognition of your duty. Utah Beach, June 6, 1944, Sainte Marie de Dumont.”

“There is a dark stone monument that notes: ‘Dedicated to the Amphibious Scouts and Raiders.’ Another stone at Utah Beach lists all the LSTs that participated in the invasion, including LST-52, the one I was on. This was exciting to me,” Nicholas said.

On to Omaha Beach they drove. The family visited the cemetery with row after row of white marble crosses and stars of David that cover the cliff overlooking the invasion beach where thousands of Americans are buried. They were killed trying to invade Hitler’s “Fortress Europe.” 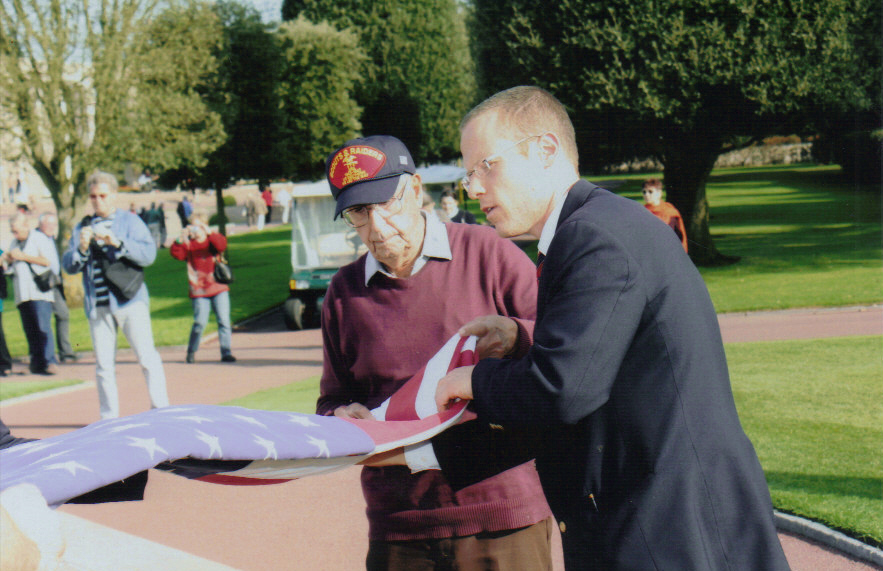 Art Nicholas of Englewood, who took part in the D-Day invasion of Normandy during World War II, helps a State Department official fold the flag at the American Cemetery overlooking Omaha Beach during the 65th Anniversary of the European invasion. Photo provided

“We got to Omaha Beach about 4:30 p.m. One of the cemetery personnel recognized me by my hat and asked if I would accompany him and take part in the flag ceremony. Following Taps I was to help fold the American flag after it was taken down for the day,” Nicholas said. “I didn’t know if I could stand it emotionally. I might start crying like a baby.”

His family, who was at his elbow, convinced him he should participate.

“While I was folding the flag people were snapping pictures of me. One of my daughters was standing by a man taking pictures. The man said to her, ‘He is my hero.’ People came up and wanted to have their picture taken with me.” 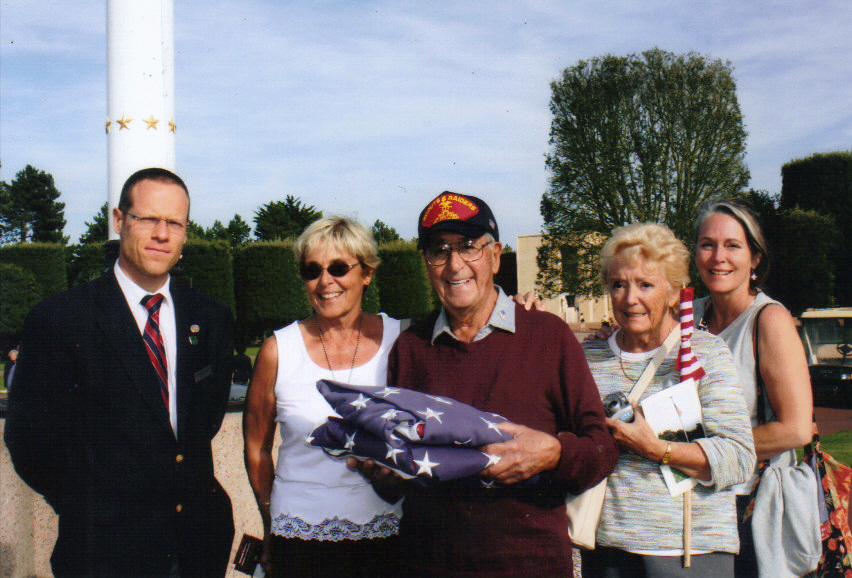 Proud moment: Art Nicholas of Englewood holds two American flags after a ceremony at the American Cemetery at Omaha Beach in France. With him at the left is a U.S. State Department official, Pamela, his oldest daughter, his wife, Hazel, and his youngest daughter, Teri. Photo provided

“We met a lot of French people, young and old alike, and they were all so gracious and thankful,” Hazel, his wife said. “They told Art, ‘Thank you for our liberation.’ Even now it is an emotional thing. They were really very kind.”

Before Nicholas went ashore on the beaches of Normandy he took part in a dry run called “Operation Tiger.” Held along the Southern shore of England at Slatton Sands some 30,000 soldiers and 300 ships were involved. It turned out to be a disaster when the Germans found out about the mock invasion and attacked the Allied ships at night with “E-Boats, enemy torpedo boats.”

When the shooting stopped 749 GIs had been killed in the night raid on the LSTs and 2,000 more were wounded. They were primarily from the Army’s 4th Infantry Division, 79th Combat Engineers and the 70th Tank Battalion. Senior Allied commanders tried to hush up the disaster, coming just before the real invasion. All parents of the dead soldiers were ever told officially was that their son was “killed in action in the English Channel.”

During the real invasion Nicholas spent several weeks bring ammunition and supplies across the English Channel to Allied troops in France and ferrying injured soldiers back to England. This continued until his LST was involved in a collision off Omaha Beach and he was hospitalized for almost a month.

After the war he went into the corrugated box manufacturing business in South Bend, Ind. He eventually sold the business and Nicholas and Hazel moved to the Englewood 30 years ago.

This story was first published in the Charlotte Sun newspaper, Port Charlotte, Florida in October 2009 and is republished with permission.

All rights reserved. This copyrighted material may not be republished without permission.Links are encouraged.