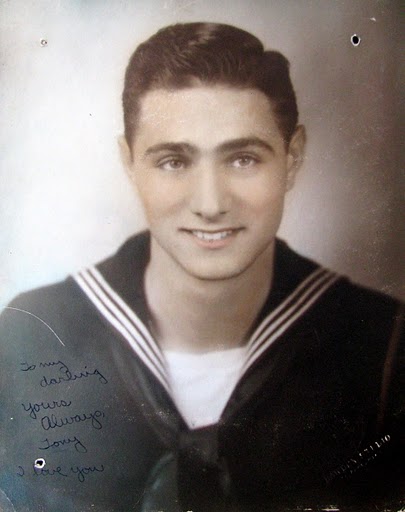 Fresh out of boot camp, 18-year-old Tony Inzerillo of Chicago went aboard the submarine USS Thornback as a mechanic very late in World War II. He and the sub he served on made one combat mission a few weeks before war’s end. Photo provided

Tony Inzerillo of Seminole Lakes subdivision, south of Punta Gorda, Fla. almost missed World War II. He and the rest of the crew of the submarine USS Thornback, SS-418, made one combat cruise off the coast of mainland Japan a month before the Japanese unconditionally surrendered ending the Second World War.

Like thousands of other 18-year-old high school graduates, he joined the Navy, went to boot camp, on to diesel engine school at the University of Minnesota and from there to the engine room of the TENCH class sub built late in the war at Portsmouth, N.H.

“My main job when we were about to dive was to shut off a 36-inch valve between the forward and aft engine rooms. If that valve wasn’t closed and we left the engines on it would suck all the air out of the submarine,” the 85-year-old former sailor explained.

The Thornback was the lead sub in a wolf pack of three submarines that put to sea from Guam on June 30, 1945 looking for prey off the Japanese home islands. The Thornback, Sea Poacher (SS-406) and Angler (SS-240) were part of Admiral “Bull” Halsey’s 3rd Fleet baring down on Japan for the kill. The trio was headed for an area off Erimo Seki. 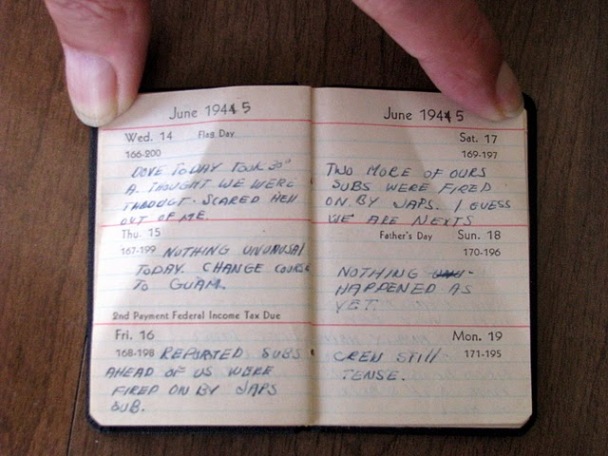 This little date book gives details about the first and only combat cruise the Thornback made to the waters off Japan with Admiral “Bull” Halsey’s 3rd Fleet. Sun Photo by Don Moore

A little black covered date book Inzerillo carried in his pocket at sea tells a portion of his war tale:

* Got one of the two ships yesterday. Couldn’t get the other that got away.”

A Navy log picks up the story from there:

“At 4 a.m. the submarine’s sound gear picked up ‘pinging’ projected by a snooping Japanese escort ship. She (Thornback) came to periscope depth to have a look. Carefully maneuvering into position, Thornback fired one shot from her stern tubes at 4:29 a.m. and heard a small explosion.

“Almost immediately the submarine picked up new sounds–two more escorts coming aggressively closer. After sizing up the new attackers, Thornback felt they were too small to use a torpedo on and left,” the report notes.

This is the crew of the Thornback taken on the beach at Honolulu during the Second World War.

“Three days later the submarine spots a 950 ton unescorted transport ship at 2,000 yards close inshore. No sooner had the submarine’s bow broken the surface the target slipped into the misty weather,” the Navy log notes. Not to be daunted, Thornback fired a spread of five torpedoes at the transport. All missed.

“The submarine closed within 300 yards of the transport and scored numerous hits with its 40-millimeter guns. The target was able to move closer inshore and escaped in the fog which closed around her like a shroud.”

“The last day of the combat cruise in the area the Thornback, together with the Angler and Sea Poacher, made a surface bombardment of the factory town at Urakawa, along the southern shore of Hokkaido Island,” Inzerillo recalled. “The bombardment with the three subs’ 5-inch main guns lasted 1 1/2 hours. We were about 1 1/2 miles off the beach. When we were through firing at the enemy shore we had set several factories on fire and badly damaged a power plant. We also demolished a locomotive.” 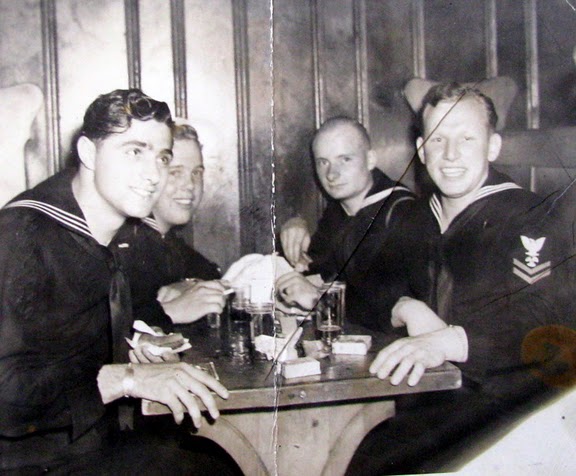 Inzerillo is pictured at the left front in a bar with his buddies in Portsmouth, N.H. before he ships out to the Pacific Theater during World War II. Photo provided

After the submarine attack on the seaside town along the Japanese coast the Thornback sailed back to Midway Island. It was exactly two weeks to the day before V-J Day (Victory Over Japan, Sept. 2, 1945).

“We were back on Midway with the Thornback when we heard on the radio that we had dropped an Atomic Bomb on the Japanese,” he said. “We were taking a two week break before our second combat patrol into enemy waters. It never happened after the bomb announcement.

“The Thornback and its crew headed back to the States. We stopped in New York City for a couple of days before going back to Portsmouth, N.H. I remember sailing down the Hudson River with all our flags flying and most of the crew on deck,” he recalled 65-year-later.

Engine-man 3rd Class Tony Inzerillo was discharged from the Navy on Dec. 17, 1945. It was just in time to make it home to Chicago for Christmas and a reunion with his month-old daughter, Jane, he had never laid eyes on.

He and his wife, Rosa, got married in Norwich, Conn. before he shipped overseas. They have three children: Jane, Anthony and Michael. They also have eight grandchildren and nine great grandchildren.

Eventually Inzerillo went to work for Echo Products, maker of houseware items, as a forklift operator. He retired 40 years later as Vice President of Sales. He and Rosa moved to Seminole Lake subdivision in 1987 from a Chicago suburb.

This story was first published in the Charlotte Sun newspaper, Port Charlotte, Florida on Thursday, October 21, 2010 and is republished with permission.

Click here to view the collections  in the Library of Congress.

Tony was married to Rosa Inzerillo on March 16, 1945 and their marriage lasted for 67 years until her death in 2012. Tony and Rosa moved to Punta Gorda from Chicago in 1987.

Tony served in the U.S. Navy’s submarine service during World War II and saw action in the North Pacific from 1943 through 1945. He retired from Glaco, a division of Ekco products in 1987 where he was Vice President of Sales.

Visitation will be held Friday, April 15th 2016 from 4:00 PM to 7:00 PM with a Catholic Wake Service at 7 PM at Roberson Funeral Home Punta Gorda Chapel. Funeral services will be held Saturday 11:00 AM, April 16th 2016 at the funeral home. Graveside services and interment will be held later at Queen of Heaven Cemetery, Hillside, IL I