Cpl. Ed Bremen is presented the Purple Heart at a ceremony in California in 1945 at the hospital where he was recovering from a battle wound he received on Saipan. He was a member of the 4th Marine Division. Photo provided

Ed Bremen was a Marine sharpshooter in Company F, 2nd Battalion, 24th Regiment, 4th Marine Division. He became a Browning Automatic Weapon man who saw action in the Pacific on Roi and Namur islands near Kwajalein Atoll in February 1944 and Saipan in the Mariana Island chain in June, 1944. He was wounded there and spent the next 16 months recuperating in a trio of hospitals throughout the country.

“The life expectancy of a BAR man in battle was a matter of minutes. The Japs looked for us and tried to shoot us first,” the 87-year-old Port Charlotte, Fla. man, who lives in Heritage Oak Park subdivision, said. “I lasted two days on Saipan before I was hit by enemy fire.”

“A BAR weighs 22-pounds without the ammo,” he explained. “I also carried six or eight pouches on my web belt and each held two clips with 20-rounds in it.”

A BAR had more than twice the fire power of an M-1 rifle, what most Marines carried into battle.

Members of the 4th Marine Division take a break on Saipan during the 24-day fight for the island that cost the lives of thousands on both sides during the World War II battle. Photo taken by Ed Bremen

Bremen chronicled his Pacific battles with a small Kodak camera he carried with him during the island fighting. He has pictures of dead enemy Marines, destroyed American tanks on the beach, landing craft coming ashore and U.S. Marines being buried at sea.

The Army Air Corps wanted to turn Saipan into a “Super Fortress” base. B-29 bomber crews used the island as a base to bomb the Japanese home islands in preparation for the invasion of mainland Japan by American forces that never happened.

On June 15 1944 127,500 Marines and Naval personnel arrived off the island in 535 ships and attacked. Two days before the landing the U.S. naval armada fired on Saipan with 15,000 5-inch and 16-inch artillery shells. In addition, more than 165,000 other shells of varying caliber were fired by American forces during the first 48 hours pounding the 31,629 Japanese troops holding the island. 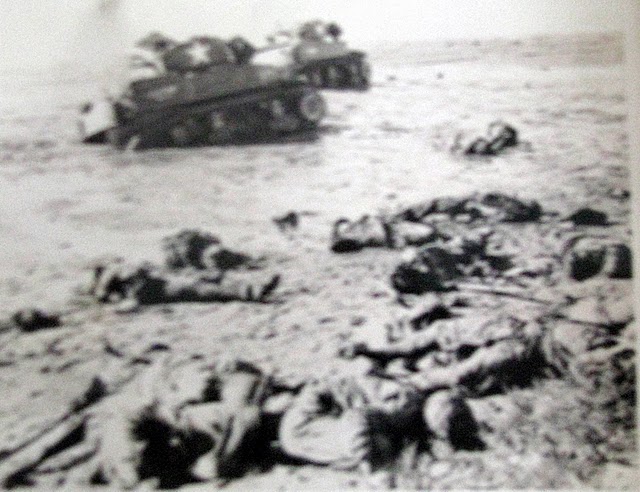 Wrecked American tanks hit by Japanese artillery while coming ashore on Saipan tell a deadly story. In the foreground are dead American Marines who didn’t make it, too. Photo by Ed Bremen

The invasion force was comprised of Marines from the 2nd and 4th Divisions. The main invasion force came ashore along a four-mile stretch of beach at Chalan Kanoa. During the first day’s battle 28 American tanks were destroyed on the beach.

Japanese forces zeroed in on the Marines hitting the beach with Howitzers hidden behind Mount Fina Susu. By the time nightfall came on day one, the 2nd Division alone had suffered 2,000 casualties. Slightly more than three weeks after Bremen and his fellow Leathernecks landed on the 85 square mile island it was theirs. By that time 71,000 American forces had come ashore. Of that number 3,100 were killed and 13,100 wounded. That was double the losses Americans suffered on Guadalcanal two years earlier.

The Japanese defenders lost 29,500 troops trying to hold Saipan. Only 2,100 prisoners were taken by the Americans by the time the shooting stopped.

A half dozen Marines are buried at sea aboard ship off Saipan in the Mariana Island chain during the summer of 1944. Photo by Ed Bremen

It was difficult for Bremen to recall specifics of what he experienced 65 years ago fighting on the island before being struck down by enemy fire. He did remember the invasion.

“We came ashore in landing craft. The Japs were waiting with automatic weapons firing from pillboxes and concrete block houses. Our artillery, our 105s, took care of many of these enemy emplacements,” he explained.

Much of the rest of the fight on Saipan was up to individual Marines. A lot of it was hand-to-hand fighting. Another thing he remembers were the banzai the Japanese made to overrun American positions.

“They mostly attack us in the morning. Fifteen or 20 of them would come right at us with their rifles. They didn’t seem to care if they were shot or not. I think they had somebody behind them with a gun point at their back,” he said.

After capturing the islands of Roi and Namur in February his division returned to Hawaii to regroup and train for the invasion of Saipan four months later.

“The first two islands we landed on weren’t nearly as big a problem as Saipan. Saipan was a bitch,” Bremen said. “They were much smaller islands with fewer Japs. We killed everyone of them before the fighting was over.”

Shortly before hitting the beach on Saipan their commander issued a written statement Bremen has kept in a World War II scrapbook all these years. The yellowed, typewritten note to his troops reads:

“To the officers and men of our combat team. Tomorrow we again engage the enemy in combat. This will be a far different operation from our last.

“We are now ready for action. We are veterans of one operation and have seen our dead. From them we have taken renewed devotion to our duties and have become spiritually fortified. I have complete confidence in the ability of each and every officer and man of RCT 24th to do his duty. We are a united team.

“My final advice to you now is first, keep contact with each other and keep pressing forward. Keep faith with yourself, your Corps, your Country and your God. And may God be with everyone of you.

“I got shot on June 17, 1944 as the Marines and my battalion were advancing slowly in a line across the island shooting every Jap we came across. They were doing their best to stop us as the 60 Marines in our battalion came at them firing their rifles,” Bremen said.

“I don’t remember much except I laid out in the sand for hours before a corpsman arrived.I was hit in the back and the butt with enemy rifle fire. The corpsman patched me up and put me on a stretcher.

“I was taken to a landing craft and out to a waiting hospital ship off shore. During the transfer from the landing craft to the ship one of the four cables holding my stretcher broke and almost dumped me into the sea,” he said.

From there it was onto a Naval hospital that took him to Hawaii where he stayed for months until being transferred to California and another Naval facility. Bremen ended up in the hospital at the Navy Yard in New York City.

Sixteen months later he was discharged and did light duty until the end of the war. He went back to work for Western Electric, where he worked before the war, installing communication equipment in phone company buildings until retiring in the 1970s. He and his first wife, Doreen, moved to Florida a short time later.

After her death Bremen moved to Port Charlotte, met and  married, Pat, his current wife. They had grown up on City Island in New York City more than half a century earlier. The couple has been married since 1999.

Bremen has two grown children from his first marriage: Edward in Connecticut and Rick in Colorado. 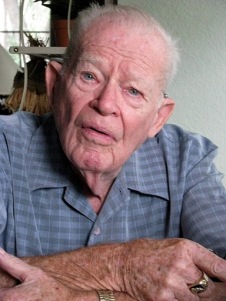 This story was first printed in the Charlotte Sun newspaper, Port Charlotte, Florida on Monday, November 15, 2010 and is republished with permission.

Edward was a retired installer for Bell Telephone and AT&T. He moved to Port Charlotte in 2000 from Spring Hill, Fla. Edward was a U.S. Marine Corps veteran of World War II, and a life member of the Military Order of the Purple Heart.

Visitation will be held from 2 p.m. until 4 p.m. and from 6 p.m. until 8 p.m., with a funeral service at 6:30 p.m., Thursday, April 12, 2012, at Roberson Funeral Home Port Charlotte Chapel. Interment and military honors by a U.S. Marine Corps Honor Guard will be held at 2 p.m. Friday, April 13, 2012, at Florida National Cemetery in Bushnell, Fla. Memorial contributions may be made to the Military Order of the Purple Heart Chapter 759, 3424 Curacao Court, Punta Gorda, FL 33950. Friends may visit online at http://www.robersonfh.com to sign the memory book and extend condolences to the family.