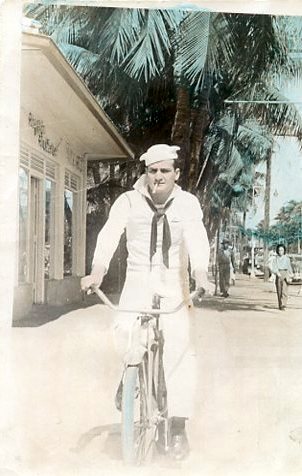 Radioman Hank Chiminello of North Port, Fla. takes a spin on a bike in Honolulu in 1944 while serving aboard the troop transport USS Medean in the Pacific during World War II. Photo provided

World War II for Hank Chiminello only lasted four months. He ended up in Honolulu as a radioman aboard a troop transport ship in April 1945.

“We were taking boys and supplies over to the islands on a 426-foot ship, the USS Medean (AKA-31),” the 88-year-old North Port resident explained. “We were sent to all the islands over there – the Philippines, Guam, Saipan, Iwo Jima and Okinawa.”

They hauled a lot of Marines from island to island, a thousand at a time aboard the Medean. Most of the time the Leathernecks were practicing landings for the invasion of Japan.

“No one knew at that time about the Atomic Bomb. I think we were in Guam when I learned that the bomb had been dropped,” Chiminello said.

“It was there I transferred to a hospital ship as a radioman. Meanwhile my ship, the Medean, went home without me. I didn’t have enough points to go home so I stayed.

“My most impressive recollection of World War II I kept in my diary. 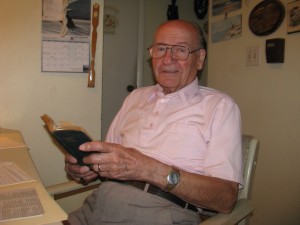 Hank Chiminello of North Port looks at his diary from World War II that tells about his troop ship sailing into Tokyo Bay during the signing of the Japanese surrender document aboard the Battleship Missouri. Sun photo by Don Moore

Sunday, Sept. 2, 1945: “Pulled into Tokyo Bay and the place looked like many of the other places we have been.

“Most of the buildings as far as we could see were demolished. All that remained was a smoke stack here and there. On top of one building, which was slightly damaged, was a huge sign that read: ‘Thanks for the U.S. Navy.’”

“Passed the Battleship Missouri where MacArthur was holding the surrender ceremonies.

“The Air Force was well represented. B-29 (bombers) down to the smallest Navy fighter plane was flying over.” 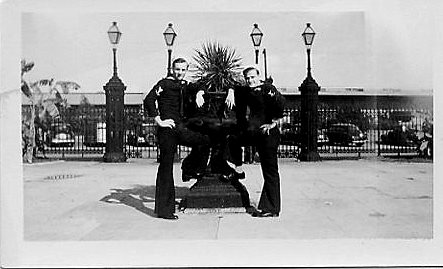 Chiminello (R) and his buddy Ray Crobo of Rhode Island are pictured enjoying themselves in Jackson Square,  New Orleans, LA. in 1944. Photo provided

“After the surrender was signed we stood shore patrol. The Japanese people were very friendly,” Chiminello recalled more than six decades later. 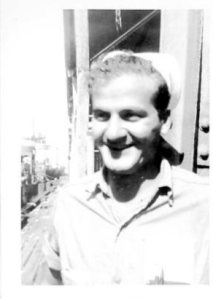 Chiminello was serving in Guadalcanal in the South Pacific when this picture of him was taken. Photo provided

He sailed back to Manila in the Philippines and transferred to an LST (Landing Ship Tank). That’s the ship Chiminello came back to the States on. The young sailor landed into New Orleans after the war was over. He was discharged from the Navy in February 1946.

Later this month, April 24th to be exact, Chiminello will take a chartered plane to Washington, D.C. to visit the World War II Memorial. He will make the one-day trip with 79 other Second World War vets and 30 caregivers as part of Honor Flight of Southwest, Fla..

It’s the third excursion for Honor Flight that has already taken more than 100, mostly World War II veterans, free of charge to see their memorial in the capital. The cost of the flights is underwritten by local businesses.

The high point of this excursion that Chiminello will be on is expected to be lunch with President Barack  Obama. Few details have been released about this happening.

“I think it’s fantastic we’re being honored like this,” he said. “I have a lot of praise for the local business who are funding this trip.”

During the 25 Years he and his late wife, Vivian, lived in North Port, Chiminello has been active in civic affairs of all kinds. He has the awards from various municipal and civic groups to prove it. 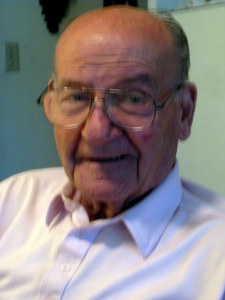 This story was first published in the Charlotte Sun newspaper, Port Charlotte, Florida on Monday, April 5, 2010 and is republished with permission. 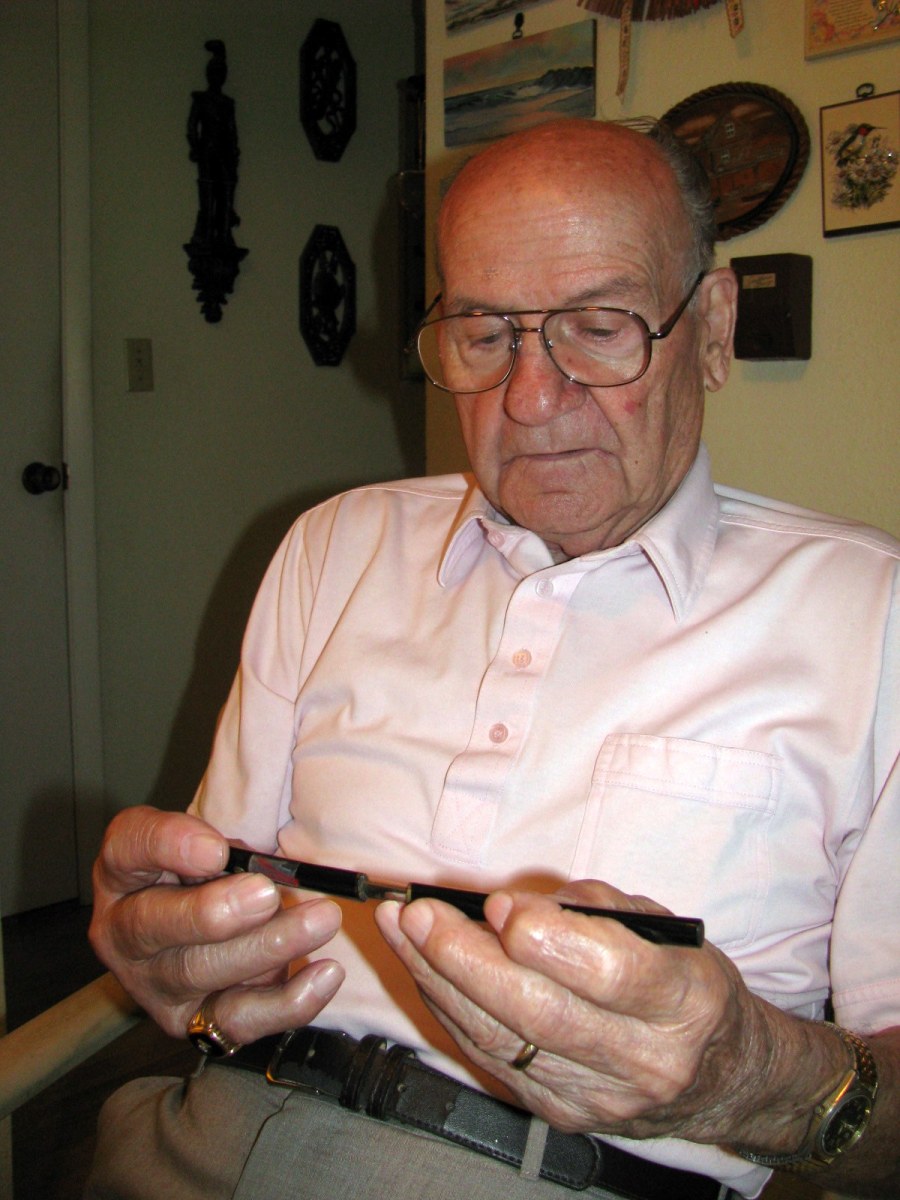 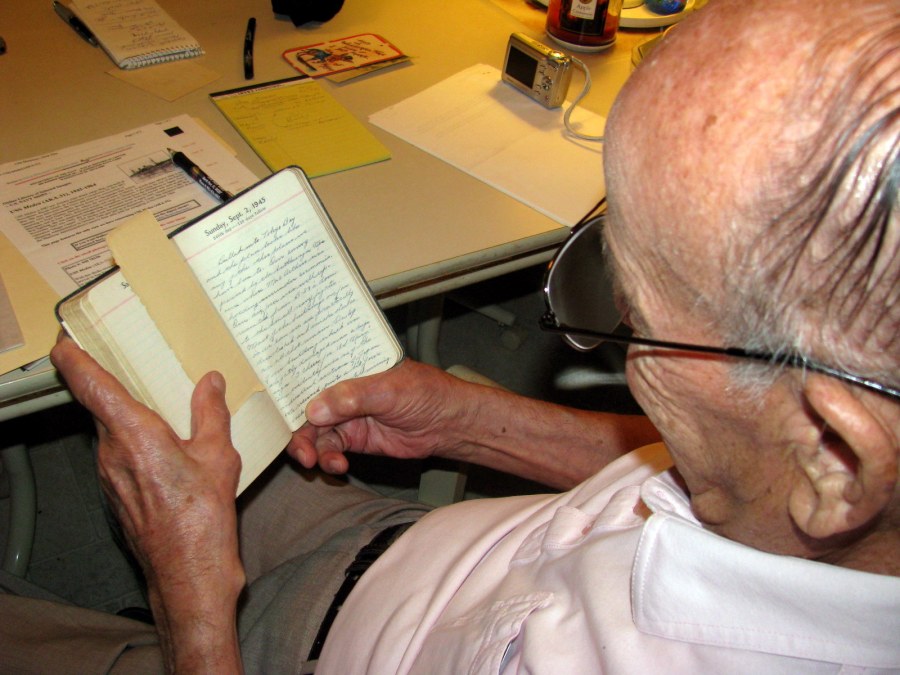 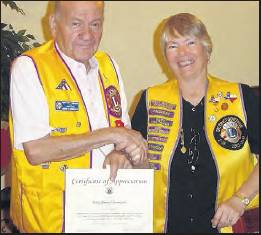 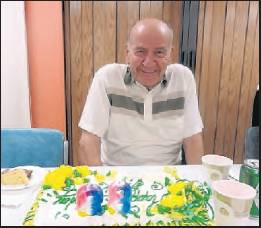 Hank Chiminiello celebrates his 89th birthday in 2011 at a surprise birthday celebration for him during a Jockey Club potluck dinner. 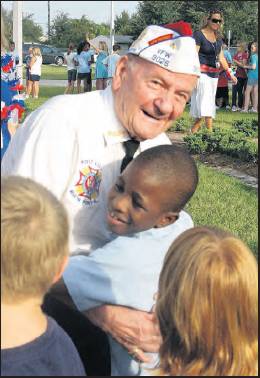 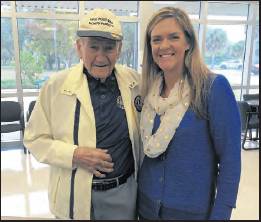 Hank Chiminiello — wearing a VFW hat, a Lions Club jacket and a Glenallen Elementary shirt — is pictured with Glenallen principal Amy Archer. Chiminiello was a longtime volunteer at the North Port school.

NORTH PORT — Hank Chiminiello, a volunteer with a big heart who gave time to multiple organizations in the city, passed away early Thursday morning.

Chiminiello died at Englewood Community Hospital around 12:30 a.m., passing away in his sleep. He was 93.

Born Jan. 18, 1922, Chiminiello grew up in Hyannis Port, Cape Cod, Mass., next to the Kennedy compound. During World War II, he enlisted in the Navy, serving as a radioman in the Pacific, first aboard the USS Medea, a troop transport based in Honolulu, then on a hospital ship. He was discharged in 1946.

In 2010, he was one of about 70 area veterans who took an Honor Flight to visit the National WWII Memorial in Washington, D.C., along with the Korean War, Iwo Jima and Navy memorials, Arlington National Cemetery and more.

After his service, he returned to Cape Cod, where he owned a nightclub, restaurant and bar, and a home on 5 acres.

Chiminiello first came to North Port as a seasonal resident, buying property in the Jockey Club community with his first wife, Janet, in 1978. In 1985, she died from cancer. When he came down to sell the home, he was smitten by the woman across the street who was holding onto his house key.

She became the second Mrs. Chiminiello. The two volunteered together — based on service, he won the city’s Citizen of the Year award twice, once alone and once with Vivian, in 2003 and 2010 — but then she died in 2010 at 85 from Alzheimer’s disease.

“I found myself all alone, but then again you’re not all alone. … If you’ve come down here to retire, you’ve picked the wrong place. Nobody really retires down here. There’s always somebody that needs … help,” he said.

In 2012, he said his typical day started “around 8 o’clock in the morning, and I go to the VFW to see if they need anything done. Then I go to the Senior Center first and run their errands, then The Salvation Army. Social Services is across the street, so I go there next, and then I end up visiting the nursing home.”

He was a stalwart fixture at the Gene Matthews Boys & Girls Club, Glenallen Elementary School, the Lions Club, San Pedro Catholic Church and Quality Health Care Center, which took care of Vivian before she passed.

News of Chiminiello’s death traveled quickly Thursday, and friends recalled him through both tears and laughter.

“He was special to us … working at the post every day for the last 15-20 years,” said Pat Love of VFW Post 8203. “He brought supplies, would hang around for a little while. … We’re all going to miss him.”

“He just brought love and joy, especially lately. He would always give words of affirmation for what we did for the kids. He would work with the VFW to provide kids in need appropriate attire for the fifth-grade promotion ceremony,” adding McDonald’s gift cards for students who received a VFW award, Archer said. He brought staff doughnuts and, on Valentine’s Day, “the biggest box of chocolates I’d ever seen.”

Chiminiello was a member of the Lions Club for more than 50 years and, for a time, served as district governor. In 2013, he received the Walter H. Campbell Pilot Award for Lions past district governors in District 35-I, Florida and the Bahamas, but couldn’t attend the convention to claim his award, as he was at a North Port Newcomer Day event passing out club brochures.

“He recently got us to go over to Quality Health Care for the very first time and we gave carnations to the residents. He was just delighted,” she said, adding he wanted to attend a Thursday award ceremony for Florida Community Bank, thanking them for helping set up the scholarship fund for North Port High School students — through a scholarship committee he started. “We are renaming our scholarship committee the Henry and Vivian Chiminiello Scholarship Committee. He helped get
that going, helped fund it. … This will be the first year Hank won’t be there to present the scholarships (during Senior Awards Night at NPHS).”

“He was a leader in our volunteer organization here,” she said. “He was a positive, vibrant, outgoing person. And he wore the Quality Health Care shirt proudly. He was so generous.”

“Anytime we needed anything, Hank was there to get it. He will be a huge treasure lost. He came every morning,” she said. “People from the pantry that he thought couldn’t get there, he would go (drop off their food) for them.”

He seemed tireless. Along with all his volunteering, for decades Chiminiello wrote a weekly column for the Sun, updating the community about the various organizations he served. Sometimes, he would honor friends who had passed, and occasionally throw in touches of self-deprecating humor.

“I’d go over and give him a hug, and he’d say things like, ‘My money’s in the other pocket.’ He was a comedian,” she said, but always helping. “He was a very giving man. It’s just astounding how quickly he went.”

Donna Anderson, one of Vivian’s daughters, said she considered Chiminiello her dad.

Chiminiello called her April 3 because he was shaking, she said, and knew something was wrong. When she went to his house, she took one look and called 911.

“I was over at the hospital (Wednesday), and I said to my husband, ‘He’s not looking good,’” she said, adding they made plans to have him move in with them.

Still, she said she almost knew it was his time.

“I think my mother came down and told him it was OK to go,” she said, adding Chiminiello suffered from congestive heart failure and had pneumonia in both lungs. “His heart just gave out on him.”

Anderson said it could take up to two weeks to finalize services.

Published in the Charlotte Sun Herald newspaper on Friday, April 10, 2015.