Lt. Col. John Dyer stands in front of a “Gooney Bird,” a C47 transport plane, at Cam Ranh Bay, Vietnam. These legendary transports first flew in the 1930s and saw service in World War II, Korea and Vietnam. They’re still being used in many countries around the world.

Lt. Col. John Dyer had no idea the planeload of .50-caliber machine-gun ammunition he flew to Tonsonnhute Airport in Saigon was part of a CIA plot to topple the Ngo Dinh Diem government in South Vietnam.

What he learned the day after he landed was that the bullets he brought into the country were given to the renegade South Vietnamese Army units to kill the war-torn country’s president. They were part of a CIA effort to change leadership in the early days of the Vietnam War.

Dyer, who is 83, said it all began when, ‘…an old buddy called me at Tactical Air Command in 1963 and said, ‘John, how would you like to fly around the world?’”

‘I had to have an airplane in commission, a functioning auto pilot, a flight crew that could make the flight and diplomatic clearances. I met the criteria,” he recalled.

The six-day flight in a C-133 transport plane from Dover, Del., one of the Air Force’s main supply depots, to California, Hawaii, Wake Island, the Philippines and finally Saigon was uneventful. It only got dicey when he reached the South Vietnamese capital with the ammunition.

“We arrived the last day of October 1963,” Dyer said. “They parked us right down at the freight terminal with our load of ammunition, which was unusual.

“There was a string of convoy trucks waiting for our ammunition. By the time we finished our paperwork and got our personal stuff off the plane, they had the machine-gun ammunition off the plane,” he said.

“The Tactical Air Command had a villa it rented where we stayed some two blocks from the presidential palace in downtown Saigon. About 8 a.m. the next morning all hell broke loose. A bunch of .50-caliber machine-guns were going off nearby. They were making a lot of racket. There was also a lot of artillery shelling.

“What we learned was that the CIA’s actions were controlling what was going on with the South Vietnam president. President Kennedy wanted a regime change in Vietnam, and that’s what this was all about,” he explained.

The .50-caliber bullets he had flown in on the C-133 transport the day before were a key factor in the over-throw of the Diem regime. On Nov. 2, 1963, the South Vietnamese generals executed President Diem.

Coincidentally, less than three weeks later, on Nov. 22, 1963, President Kennedy was also assassinated. Vice President Lyndon Johnson assumed the presidency. He immediately confirmed that the United States would continue its efforts to support the South Vietnamese government—which drew the U.S. into a quagmire we would eventually lose a decade later when American troops were pulled out of South Vietnam. 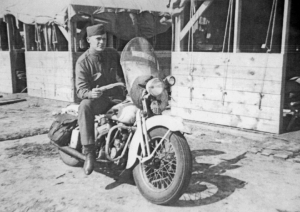 Pvt. Dryer is show on the 1936 Harley-Davidson motorcycle he brought with him to Drew Field in Tampa, Fla., where he served as a member of the U.S. Army Signal Corps. The bike had a 61-cubic-inch overhead valve engine. It was the first Harley to use streamlined gas tanks. He paid $275 for the motorcycle in 1941, about what it cost new.

Dyer began his military career at Drew Field in Tampa, Fla., as a member of the U.S. Army Signal Corps in March 1942. Drew Field is where Tampa International Airport is located today.

“I recall there were a lot of seagulls that would fight you for what was in your mess kit,” he said with a chuckle. “We lived in a line of tents in a soggy area of the post.”

In September 1942 he joined the Aviation Cadet Program and began his training in Montgomery, Ala. When he graduated from flight school at Moody Air Force Base in Valdosta, Ga., the following April. The U.S. Army Air Corps didn’t know what to do with the new pilots so they sent them for more training with the civilian airlines.

“I ended up at Eastern Airlines School in Atlanta. I learned to fly a DC-3, which was the civilian version of the military C-47 transport,” Dyer said. “I was finally sent overseas as a member of one of the four crews that was going to fly brand new C-54 transports that were actually DC-4 airliners.

“Big. Gen. A.D. Smith, formerly the president of American Airlines, who was then the commander of Air transport Command in the European Theater, told us we were going to run a VIP airline between London and Paris. We would make three round-trip flights a day. Walk-on passengers would only be able to take whatever they could carry on.

“It never got off the ground because the British and French got together and killed the idea,” he said. “They still didn’t know what to do with us so they sent us back to Washington, D.C., to the Pentagon.”

Not long after that, 2nd Lt. Dyer found himself back overseas. He ended up in Dezagon, India, flying aviation gasoline over the Himalayan Mountains from India to China in a C-54 transport. He made 81 round trips in all kinds of weather during all hours of the day to keep the B-29 bombers that were bombing Tokyo supplied with aviation fuel.

Flying “The Hump,” as it was called, was a harrowing experience that took all the skill and courage a pilot could muster to make the 800 to 1,400-mile trip over the Himalayas in and out of a half dozen air bases in China. Dyer flew the Southern Route across the mountains, which was considered the easy flight, as opposed to the Northern Route.

Fully loaded his C-54 could carry 48, 55-gallon drums of highly explosive, high-octane aviation gasoline over the mountains at a maximum speed of 190 mph and a maximum altitude of 14,000 feet. With a load on board, the four-engine transport would make it over the Salween River Gorge with peaks of 11,000 feet, the highest point on the flight, without too much effort.

But there was much more to flying “The Hump” than the capability of the airplane.

Then there was the weather.

“When the monsoon season came in the summertime, all of India was under rain clouds that made flying exceedingly tough,” Dyer said. “Come wintertime we had to cope with ice and electricity. Ice crystals would form on the props and they would create static electricity. At night this would create four big flying wheels of fire form the electricity coming off the props.”

It was an unnerving situation in a plane filled to overflowing with aviation gasoline.

2nd Lt. John Dyer stands near his C-47 transport on a beach along the Bay of Bengal in India during World War II. Photo provided by John Dryer

When the first contract pilots from American airline companies started flying the Northern Rout in 1942, they not only had to contend with the almost impossible flying conditions the altitude and the limited capabilities of their airplanes, but they were also attacked by Japanese fighter planes that flew out of the all-weather base at Milking in northeastern, Burma. This was the enemy airfield eventually captured by Frank Merrill’s “Marauders” after a grueling march over some of the highest mountains in the world and through malaria-infested swamps and jungles.

If a pilot followed the wrong beacon, he would run out of gas and crash.

By the time the Korean War broke out in June 1950, Dyer was flying C-54 transports for the Far East Air Force out of Tokyo. He flew GIs in and out of South Korea all the time.

“We’d go over and pick up 40 GIs for a little R and R. We’d haul them back to Japan, give ‘em clean uniforms and put them up in a hotel. Five days later we’d take them back to Korea to the front lines.”

For years Dyer made repeated trips from Dover Air Force Base to Vietnam with supplies and troops for the war. Often on those two-week round-trips to Southeast Asia he would bring back a load of dead soldiers.

Dyer looks at a scrapbook of World War II pictures of himself and his buddies at his home in Buttonwood Village mobile home park in Punta Gorda, Fla.

“We’d bring back two dozen bodies sealed in aluminum coffins to Dover, where the mortuary center was that prepared the bodies for burial before they were returned to the families,” he said.

He arrived in Vietnam in 1963 for the first time, but by 1966 he had spent a year in the country as the commander of an air support squadron at Cam Ranh Bay. He was there in 1966 when President Johnson came calling.

“It was a photo op for the president with the troops. It was a mob scene. I went back to my trailer and took a nap; Johnson was not of my party.”

Lt. Col. John Dyer retired from the U.S. Air Force in 1971 after a career of 29 years, seven months and 16 days that had begun in October 1941 when he was drafted into the U.S. Army as a young recruit from Lafayette, Ind. 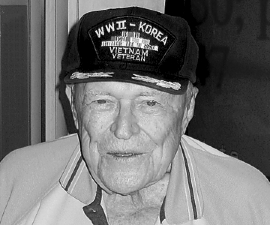 This story was first published in the Charlotte Sun newspaper, Port Charlotte, Florida and is republished with permission.