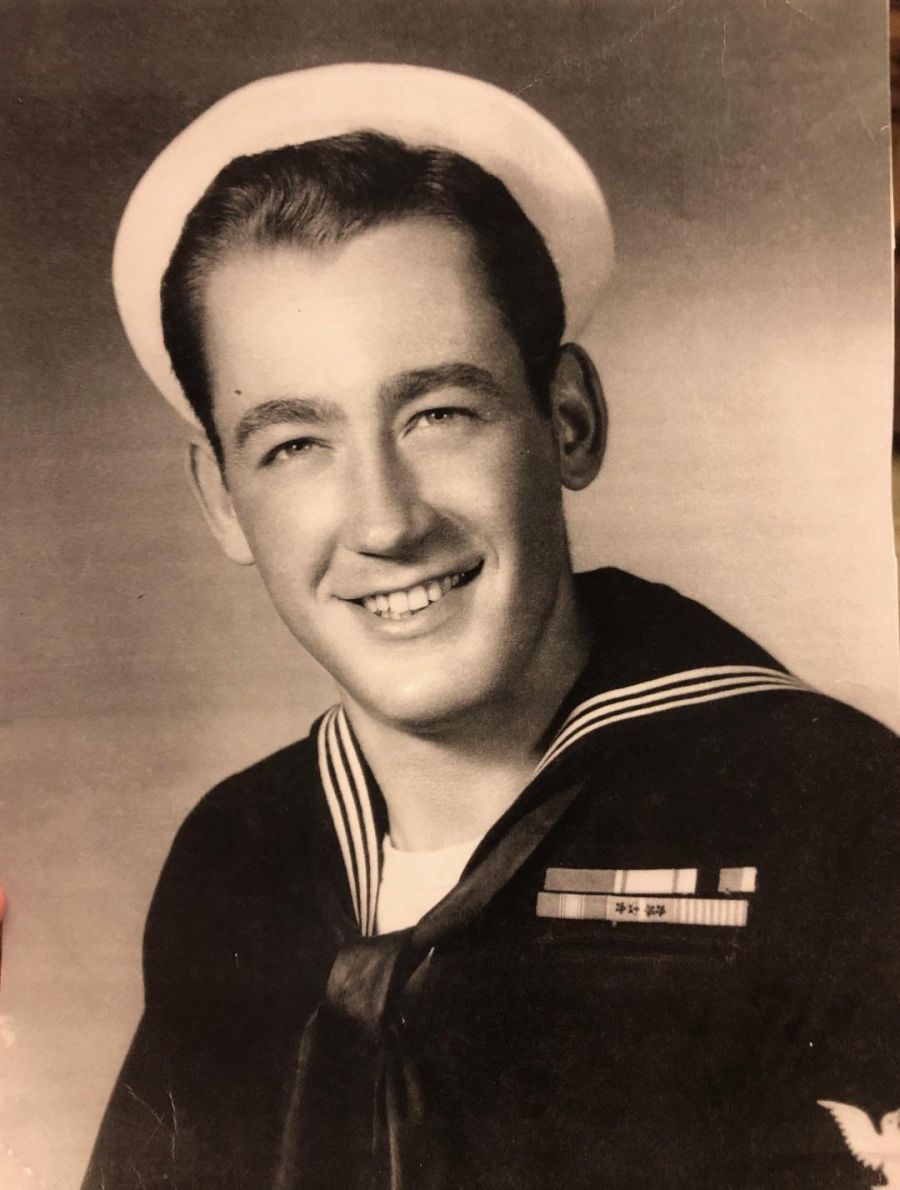 This was “Murph” Murphy of Venice when he graduated from Great Lakes Naval Training Center in 1951. He was 19 years old. Photo provided

James “Murph” Murphy spent most of the Korean War transporting troops to and from Korea aboard the USS Montrose, an attack transport ship. He started as a deckhand and by war’s end was a quartermaster petty officer.

“We hauled Marines, Army and United Nations troops from Japan to Korea time-aftertime,” the 90-year-old Venice man said. “We ran down to Pusan, Korea during the early runs shortly after we broke out of the “Pusan Perimeter,” defeating the enemy.

United Nations forces in Korea were almost run off the peninsula by North Korean troops during the early days of the war. They hung on by their fingernails until our replacement forces gained a toe hold on the peninsula.

The enemy lost its hold in Korea when Gen. Douglas MacArthur landed American Marines at Inchon and did what became known as an end run maneuver. He cut the North Korean supply line and that forced them to retreat across the entire peninsula.

The chevrons of a Navy quartermaster petty officer. James Murphy was in the Navy as a quartermaster in the Korean War. Sun photo by Don Moore

“All the U.N. forces needed were bodies,” Murphy recalled. “We brought Marines into Inchon aboard the Montrose. When we sailed into Inchon Harbor we could see artillery fire up in the hills. Our captain wanted to get in and out of the harbor as quickly as possible.

“The Marines we brought in were sent to the front lines immediately.”

When Murphy and his transport ship first landed at Inchon he was 20.

“They called me ‘Pops,’ he recalled, because he was one of the oldest deckhands aboard ship. “We moved around to different ports in Korea throughout the war bringing in fresh fighting forces. We could take 1,000 or more Marines on each trip.

“Then they decided they were going to send us to Hong Kong, China.

We picked up British troops stationed in Hong Kong. We took them back to Inchon. We were underway constantly,” he said. “By this time, our troops were coming out of the Chosin Reservoir area of North Korea.

They had to fight their way back to the sea and waiting transport ships. It was hell.”

Hundreds of thousands of North Korean and Chinese soldiers were attacking a single division of 20,000-plus Leathernecks.

For 2½ years Murph served aboard the Montrose. He was on the attack transport when the Korean Armistice was signed in July 1953. Then he transferred to an LSD — landing ship dock — USS St. Mary.

The big change in his daily life came when they made him a quartermaster and put him in the flight command.

Murphy on a signal light in the islands during the Korean War. He served from ’51 to ’54 in the Navy. Photo provided

“You had to know navigation and signing in the quartermasters,” he said. “We had to learn Morse code, lights, semaphore, and flags. The flight command made sure everything was operating properly aboard ship.

“We went back to Korea. On the way back we stopped at Enewetok and Bikini,” he recalled. “We picked up pieces of an atomic bomb and took them aboard ship. We transported the bomb pieces to Guam.

“We put the crates with the bomb pieces in our landing craft aboard our LSD. Then technicians came aboard and checked us out. They wanted to see if we were radioactive or not. It scared me.

“I stayed on the landing craft and went back and forth to Korea many more times. I stopped at most of the islands that we fought over during World War II. I was on Iwo Jima and Okinawa, among others.

“When we got to Iwo Jima I think it was the 10th anniversary of the U.S. Marines’ capture of the island in WW II. Iwo Jima had black sand and pillboxes right on the beach. The American flag was flying from the top of Mount Suribachi.

“When I was in Tokyo one time I saw Gen. MacArthur. He as a very distinguished looking officer. He was replaced in Korea by Gen. Mathew Ridgeway.”

“I decided I wanted to go back to college and major in industrial arts. I went to Eastern Kentucky University and got a BA and an MS.

“Then I taught school in Lexington, Kentucky for a short while. Then I started teaching industrial arts in Ohio. From there I went to Miami University of Ohio and taught.

Murph is surrounded by all the letters he sent to his mother during Korea. She kept them for years and he ended up with them all over again. Photo provided by Erin Murphy.

After that I got qualified to be a high school teacher. I became the youngest high school principal in secondary education in Ohio. Then I was hired to teach at the University of Arizona,” he said. “Altogether I taught for 36 years.”

He and his wife, Darlene, moved down to Florida in 1995. They have five children: Maurice, Patricia, Jimmy, Elizabeth, and Megan.

This story was first published in the Charlotte Sun newspaper, Port Charlotte, Fla. on Monday, Sept. 30, 2019, and is republished with permission.