This was Ray Gomes when he graduated from boot camp at Great Lakes Naval Training Center outside Chicago in 1965. Photo provided

Ray Gomes of Gulf Cove subdivision, Port Charlotte was a nuclear reactor operator aboard the USS Enterprise, America’s fist atomic aircraft carrier. He was aboard when tragedy struck the Navy’s largest ship. An on-deck explosion the morning of Jan. 14, 1969 caused a chain reaction and fire among the carrier’s aircraft that were ready to launch.

The end result: 27 sailors were killed and 314 more crewmen were injured.

The ship was about to sail back into the Vietnam war zone for the fourth time. Before leaving for Vietnam the Enterprise had to take part in a battle drill off the coast of Hawaii. During the drill armed aircraft from the carrier were landing and taking off at sea just as they would off the coast of North Vietnam.

After graduating from the Navy’s nuclear program he went aboard the Enterprise (CVAN-65) in 1969 four months before the ship headed for war in the Far East.

Although it’s been almost 50 years since the “Big E” blew up, Gomes remembers what happened like it was yesterday.

“The first day’s events during the drill went off like clockwork. The next day there was a boom in the water near the ship that caused the Enterprise to rock. The bridge announced, ’This is not a drill, general quarters,” the 72-year-old retired Navy man recalled.

“What happened, they had these devices called ‘huffers’ they used to supply power to turn the jet turbines to get them started,” Gomes explained. “The hot exhaust from one of the ‘huffers’ was pointed at a missile hanging from the wing of a nearby jet. The heat from the ‘huffer’ caused the missile to explode. When it did the explosion took out the fuel tanks on the surrounding planes which burst into flames.

“There was fuel on the flight deck that was burning and within a few minutes the deck fire was causing bombs in the planes to go off. At some point the exploding bombs punched holes in the four-inch thick, high-tension steel flight deck. At that point flaming fuel from the flight deck started running into the interior of the ship.

“The compartment I had been sleeping in right under the flight deck was incinerated by the leaking fuel. I had just moved out of that area to another sleeping compartment a day or two before,” Gomes said.

“While most of the Enterprise’s crew of 5,000 were busily fighting deck fires and pushing exploding planes over the side, a nearby destroyer escort moved into position alongside the burning carrier and turned their fire-fighting hoses on the stern of the flaming Enterprise which helped.

“At the same time our skipper turned the ship into the wind. That caused the smoke from the fires on deck to blow backwards away from our ship.

“Then he turned on the Enterprise’s nuclear decontamination system. This system was a bunch of nozzles that sprayed water all over the flight deck. It was their primary way to wash down any contamination the ship may have received from a nuclear blast. These spray nozzles helped quench the fire.”

While all this was happening on deck, Gomes and his unit were deep in the bows of the Enterprise working to keep the power on and the ship moving. Although he could feel the ship rock from the exploding bombs on deck, he had no idea what was happening topside.

“I think the fires were put out somewhere around 10 a.m.,” Gomes said. “They started two hours earlier, around 8 a.m.”

By this time the firefighting crews pushed 16 badly damaged planes over the side,” he said. The total tab for the fire aboard the Enterprise was in excess of $125 million.

“By 11 a.m we were headed back to Pearl Harbor. When we got there the air crew left the ship. They left some of us behind to help clean up the ship. We worked six days a week. Every three weeks we got two days off,” he said. “We were 1st, 2nd, and 3rd class petty officers carrying soaked mattresses off the Enterprise that were damaged in the fire.

The USS Enterprise, the largest fighting ship in the U.S. Navy goes up in smoke after a Zuni rocket under the wing of a jet on deck accidentally fires turning the carrier into a sea of burning gasoline and exploding bombs on Jan. 14, 1969 off the coast of Hawaii. Some 27 sailors died in the conflagration and 314 were injured. Photo courtesy U.S. Navy

“I could’t believe Pearl Harbor had the people who could put the Enterprise back in shape in six weeks, but they did,” Gomes said. “They replaced the sections of deck that were damaged. They also replaced the port side elevator that burned up in the fire. Then off we went to Vietnam.

“We sailed from Pearl to Subic Bay in the Philippines where we got supplies. Then we sailed on to Vietnam for a month,” he said. “Then we sailed back to Subic Bay for more supplies then back to sea off the coast of Vietnam again.

“While we were in Vietnam the North Koreans shot down one of our spy planes. The year before they had captured the ‘Pueblo,’ an American spy ship sailing just off their coast and tortured the crew before releasing them,” Gomes said.

“As a consequence, the Enterprise along with two other carrier task-forces were sent to the waters off North Korea.
Underneath the plane was a stainless steel bomb, probably a nuclear weapon. I asked the aviator what was going on?’ He told me, ‘We’ve got the watch today.’While I’m standing there talking to the pilot, a Russian bear bomber flew across our flight deck. I thought, ‘Oh my God, this is for real.’ 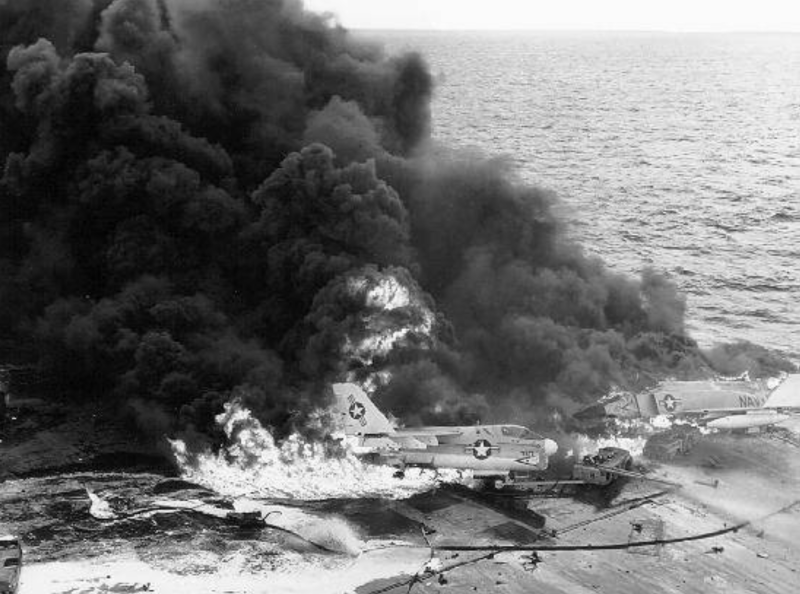 Sailors work to extinguish several burning jet fighters on the deck of the “Big E” on fire during sea trials off the coast of Hawaii before sailing for the war in Vietnam. Photo courtesy U.S. Navy

“Below the Russian bomber was one of our Phantom jets under its bomb bay. Another of our Phantoms was following the bomber. If it does anything the Phantom underneath can deflect the bomber from dropping its bombs on a target and the the other guy can shoot the bomber down.

“For 30 or 40 days we were stuck off the coast of North Korea. Then we sailed back to Subic Bay and on to California where we dropped off our air wing. The rest of the crew sailed on to Portsmouth, Va. where the ship when in dry dock,” Gomes said.

After a six year hitch in the Navy he got out and went to work as a civilian for Electric Boat Co. in Groton, Conn. Gomes was involved in testing nuclear submarines instruments. He worked there 18 months and then went to work at the University of Rhode Island. For nine years he worked in the research reactor program at the school.

His final years in business was with the Davis-Standard, the largest supplier of extruded plastic equipment in the wold.

He got to see the world, particularly Asia, thanks to this firm. He served as one of their representatives for a number of years.

“I’ve been to 55 countries plus China where I spent a lot of time. The first time I went there was 1988. I got to see the end of the Cultural Revolution,” he said. “I watched China go from a very closed society to today. The Chinese leaders more recently told their people, ‘You can do anything you want, just don’t mess with the government.’

“The last time I was in China was two years ago when a group of us went to a trade show in Shanghai,” Gomes said. “Shanghai is a marvel to see. It’s unbelievable how advanced it is.”

Gomes and his wife, Linda, moved into their Florida home in 2006. They have two children: Ray Jr. and Wendy.

This story was first published in the Charlotte Sun newspaper, Port Charlotte, Fla. on Monday, Dec. 3, 2018 and is republished with permission.