Byron Hill of Venice is pictured as a 27-year-old Marine Corps captain stationed in San Diego. He had just completed a 15 months tour in Vietnam as an artillery officer and was about to plunge into the world of big business. Photo provided

After graduating from Southern Illinois University in 1964 Byron Hill of Island Walk Subdivision, Venice, found his name at the top of the list to be drafted and sent to fight the war in Vietnam.

“I was told I was going to be inducted into the Army within 30 days,” he recalled decades later. ”So I joined the Marine Corps. I went in the Corps because I had a cousin who was in the Marines who was killed in World War II.

“I went to Officers Candidate School at Quantico, Va. and barely got through basic because I had a terrible time doing pull-ups,” he said. “From there I was sent to Fort Sill, Okla. for artillery training and landed in Vietnam in ’67. I became an artillery spotter.

“I was involved in a brutal fight with the North Vietnamese Army in the Quế Sơn Valley near Da Nang in May 1967. Our unit was almost overrun by the NVA,” Hill recalled recently. “I was assigned to Mike Company, 3rd Battalion, 5th Regiment, 1st Marine Division. Capt. James McElroy, Jr. was our company commander. We were sent out on a series of search and destroy missions to find the enemy.”

In the midst of the battle, Lt. Hill moved to an open area to call in close air support and adjust artillery fire against the NVA. He was there for hours calling in support. 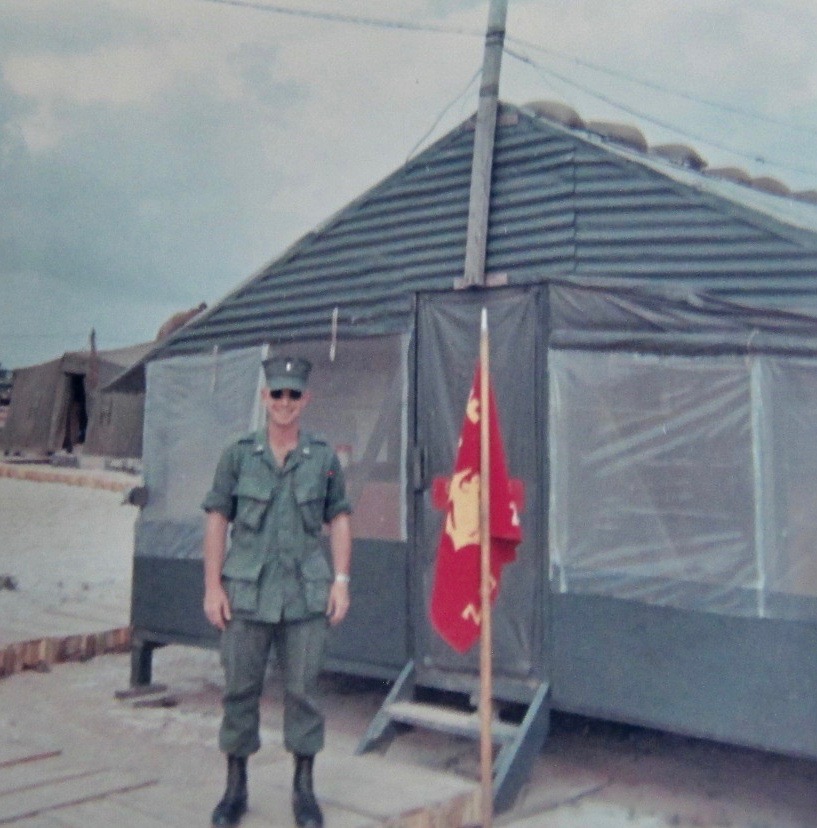 Hill stands in front of his company’s headquarters near DaNang, South Vietnam in 1967. Photo provided

A short while later Hill received word the commander of Kelo Company had been shot. He worked his way down the front lines to where the wounded officer was and took over. McElroy, his company commander, said at the time, “I didn’t know if I had sent the young lieutenant to his death.”

“Shortly after arriving I was able to call an air strike in and that made all the difference,” Hill said. “We were dealing with incoming artillery at the same time we were trying to fight off the enemy. It was hot, surreal and unreal at the same time. We had incoming and outgoing mortars, small arms fire from all directions. Enemy soldiers were coming through our lines.

The situation got so bad at times Hill’s men used the enemy’s AK-47 assault rifles. They fired the same 7.62 ammunition and it could be used interchangeably.

“Over the next couple of hours we dug in as best we could since we expected an enemy attack that night,” he explained. At first we could see them sitting around their camp fires chanting all kinds of stuff. Then they attacked.

“We were on the north side of the Song Ly Ly River and the NVA were about 200 meters to our front in hedgerows near a dried-up stream. About midnight loud and shrill whistles plus glaring bugles signaled the NVA’s first deadly attack.

He called in illumination rounds to silhouette enemy soldiers. That made them vulnerable to machine-gunners and riflemen. Marine forces accounted for more than 200 enemy confirmed killed with and estimated 300 or more dead or wounded having been dragged from the battle field.”

At the conclusion of the fight the next morning the NVA finally withdrew from the battlefield after failing to overrun the Marines’ position.

A report on the battle notes,“ Hill brought overwhelming artillery and mortar fire to bear on the NVA. He was also directing devastatingly accurate air strikes. The initial strikes by F-8 Crusader jets is credited with turning the tide of battle in favor of the Marines. They dropped Napalm on enemy trenches.

For his efforts, Lt. Hill received the Silver Star for heroism.

During his 15 months in Vietnam he served long enough to take part in the “Tet Offensive.” This was a massive coordinated effort by the NVA and VC to overrun all the major cities and military bases in South Vietnam. From a military standpoint it was a disaster for the North Vietnam forces. From a political standpoint it successfully toppled the South Vietnamese government.

“When Tet started I was the commander of a Howitzer company of 105s and 155s stationed with a helicopter unit at “Marble Mountain in Vietnam,” Hall said. “The NVA and VC would come charging us out of the river. We’d mow them down.

“Before the end of Tet my unit was moved to Hue (the ancient capital city). The first few days we weren’t allowed to fire on the ancient citadel. Then we got permission to fire on it and we blew it up.”

Hill said the most meaningful thing that happened during his time in Vietnam happened years after the end of the war when a half a dozen buddies from this unit returned in 2009 and went to Vietnam.

“We were seeking closure and we wanted to commemorate the memory of several of our fallen Marines and Navy corpsmen who died while serving with us,” he said. “We were drawn to the obscure hamlet of Phuoc Duc where we had all faced and witnessed death more than four decades earlier.”

They were being shown the countryside by a former colonel in the North Vietnamese Army they had fought against. He knew the terrain and the people of the area whom they met with and found delightful.

“All of a sudden there was a little lady holding a badly deformed child in our midst. He had a cleft palate and no nose. Our group was able to get the child some medical attention to correct his serious medical problems.”

“Today, Minh Duc, that little boy, is a pretty normal kid with a future,” Hill said.

When Hill returned from the war in the ‘60s he spent a couple more years in the regular Marines in San Diego and then went to work in the private sector and joined the Marine Corps Reserve at the same time.

He spent the first decade of his civilian life working for Johnson & Johnson, then he went to work for Emerson Electric and wrapped it up working for the Marmon Group out of Chicago owned by the Pritzker family who owned the worldwide industrial conglomerate.

He and his wife, Janice, moved to Florida in 2013. They have a daughter named Shelly.

This story was first published in the Charlotte Sun newspaper, Port Charlotte, Fla. on Monday, July 29, 2018 and is republished with permission.