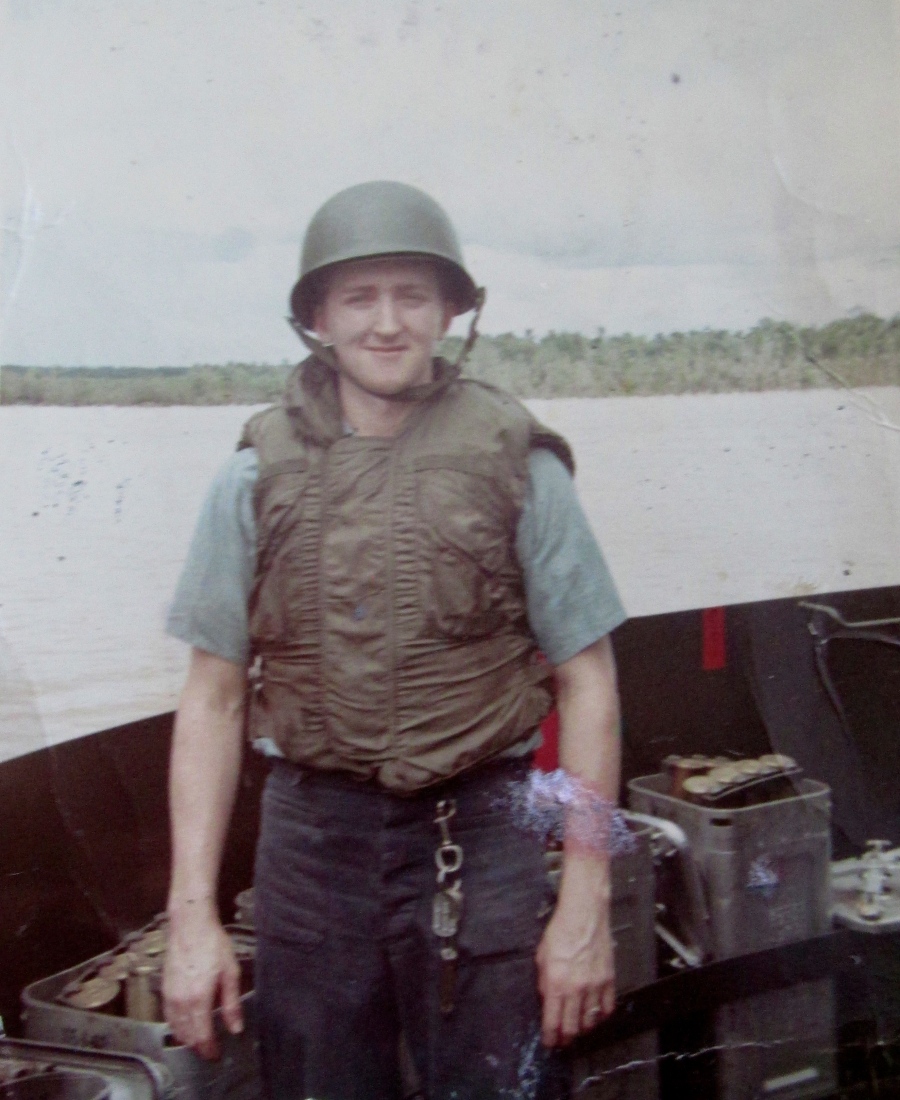 Baker Michael Kelley is pictured aboard the USS Nueces in Vietnam in 1968. Photo provided

Michael Kelley sailed for South Vietnam aboard the self-propelled barracks ship USS Nueces (APB-40) in 1968. He was the night baker aboard the strange craft that anchored at Vung Tau, near the Mekong River approach to Saigon from the south.

Originally built at the Boston Naval Shipyard at the close of World War II in 1945, the Nueces was recommissioned on May 3, 1968 and sent to war once again. It took her forever to reach the Southeast Asia war.

“After getting to Pearl Harbor we sailed for Vietnam,” Kelley recalled. “It took us 40 days to get there because our maximum speed was 12 knots.”

Their job was to provide a home away from home for 1,000 Army troops fighting in the Mekong Delta of South Vietnam. The Nueces provided accommodations for them that included a bunk, great chow and medical attention from doctors on board the ship if needed.

“The Nueces traveled the Mekong Delta with the 9th Infantry Division. Those Army guys loved us,” Kelley said

“When they came back from the field we had steak and lobster for them. When I was over there I didn’t really appreciate how much those Army troops did,” he said.

“They liked everything about living aboard our ship except the hosedown with a fire hose they got when they first came aboard from the field,” he recalled with a grin.

This is the USS Nueces, a barracks ship that was home to 1,000 U.S. 9th Infantry soldiers who served in the Mekong Delta area of South Vietnam in 1968. This was the ship Kelley served on for a year over there. Photo provided

The closest Kelley and his shipmates came to war was during the Tet Offensive that began Jan. 31, 1968 when 85,000 North Vietnam Regular Army Soldiers and Vietcong guerrillas overwhelmed many of the major cities in South Vietnam for a short while. In the end it was a military disaster for North Vietnam and a political disaster for the South. This was the start of the United States’ withdrawal from the country which culminated in the war being lost.

“We got involved in the fight while on the Mekong aboard the Nueces. We got a Combat Action Ribbon for our part in Tet,” Kelley said.

In between the time he got out of the service and retired from Sears he joined the Naval Reserve in 1986 and saw the world during this two-weeks of summer training each year. Kelley traveled to Spain in 1996, Guam in ’97 and Italy in ’98.

His unit was activated in 2004 and sent to Kuwait. Kelley spent eight months there serving as a safety officer helping unload ships.

He and his wife, Janice, moved to their Rotonda West home several years ago from Indianapolis where he was born. The couple has three children: John, Nickole and Chad.

This story was first published in the Charlotte Sun newspaper, Port Charlotte, Fla. on Monday, July 17, 2017 and is republished with permission.