This is Pfc. Tom Moore at 19 shortly after getting out of Boot Camp at Camp Gordon, Ga. in 1943. He was sent to Europe and became a member of the 3rd Cavalry Reconnaissance Squadron. Part of Gen. George Patton’s 3rd Army. Photo provided

Moore landed on the beach at Normandy along with the rest of Gen. George S. Patton Jr.’s 3rd Army two months after the D-Day Invasion and began their drive across France, Belgium and Germany eventually ending the war in Europe on May 8, 1945.

The 93-year-old local man wanted to be an aviator, but got drafted into the Army in 1943 and was sent to Camp Gordon, Ga. where he spent more than a year training to be a reconnaissance soldier in Patton’s army in Europe. On Aug. 7, 1943 he joined the Allied armies in Western Europe fighting the Germans.

One of the first things Moore recalls happening to his reconnaissance unit was that it located eight American aviators who had been shot down behind enemy lines. They existed in enemy territory for months with the help of the French Resistance.

“Another time we were in this French village. I looked across this field and here comes a German soldier with no gun or helmet,” he recalled 75 years later. “With him was a 15-year-old boy in a German uniform who was crying. I took both of them as prisoners and turned them into our MPs.”

But Moore’s big battle in World War II was Metz, France. It had been a fortified city along the French-German border for hundreds of years. Forming the backbone of the fortifications in and around Metz was Fort Driant.

The German held the fort with its 150mm guns that could slow down any assault. Patton’s plan was to attack the fort by air and land. His 3rd Army soldiers would proved the ground assault and the U.S; Army Air Corps would do the rest. The American attack on the fort was stopped cold. Allied forces had to regroup and construct some other way of capturing Fort Driant. 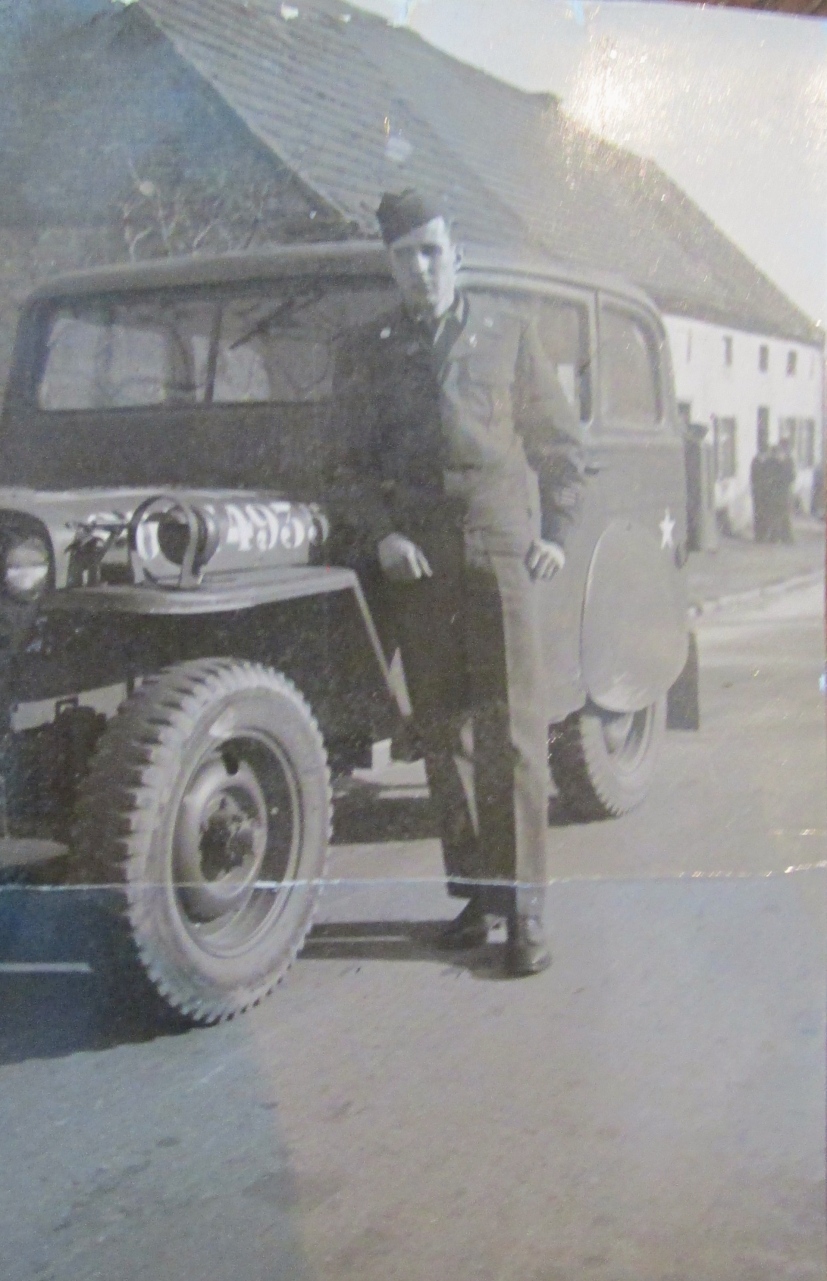 Moore in Nuremberg, Germany near the end of the Second World War. Photo provided

A second attack on Fort Driant was proposed with the help of combat engineers. Although other tactics were used together with tanks, explosive charges and bangalore torpedoes it failed, too. After another attempt by Patton’s soldiers to take the fort they withdrew. By then the 3rd Army had lost 64 soldiers killed, 547 wounded and 187 missing.

According to military historians the attack on Fort Driant was the only battle Gen. Patton ever lost in his distinguished military career.

Eventually in mid-December 1944 Metz fell to Allied forces. This was roughly five months before V-E Day when the Germans unconditionally surrendered.

Moore’s actions at Metz were similar to Patton’s.

“We were out in front of our lines when my Jeep was hit by enemy fire,” he explained. “Two Germans with a bazooka were hiding in the brush and fired at us. They hit the Jeep near me with a shell and blew it up. I was knocked unconscious. I don’t remember much after that.”

Moore was given medical attention for his injuries. When he came to he was in a Repo Depot somewhere in Germany near Nuremberg. Soldiers being held in theses facilities were about to be sent to other units. About the time he was relocated to a new outfit the war in Europe was over.

The Germans unconditionally surrendered on May 8, 1945.

“I came home on a liberty ship to New York City. It took us about 10 days to get home. To get there we had to sail through a storm. The waves were rough and I was seasick,” Moore said.

This little card Moore kept all these years notes he was a member of the 3rd Cavalry Reconnaissance Squadron—“Patton’s Ghost Troops” in World War II. On the back side of the card is “Patton’s Prayer.” Sun photo by Don Moore

When he suffered a concussion from the German bazooka shell all of his belonging were shipped home to his parents without explication. They didn’t know if he was dead or alive until he showed up at their front door a couple of days after Christmas 1945.

Moore married “Gini” in 1948. They’ve been married 68 years. For 32 years he worked for a large electrical firm in Ithaca, N.Y. After he retired in 1980 they moved to this area a year later. They had two children: Thomas and Sally. She was killed in a car accident.

Tucked in Moore’s belongs from his war years was a business card size plastic card. On one side it reads: “3rd Cavalry Reconnaissance Squadron—Patton’s Ghost Troops.” On the flip side is “Patton’s Prayer.”

The general was a key player in the Battle of the Bulge, the largest fight on the Western Front involving 600,000 American soldiers and 400,000 Germans. The engagement for Patton wasn’t going well because the cold, wet weather grounded the U.S. Air Corps. So the 3rd Army commander called on the Almighty’s assistance. Patton told his chaplain to write a prayer asking God to fix the weather. This is what the priest wrote:

Almighty and Merciful Father, we humbly beech Thee, in thy great goodness to restrain these immoderate rains with which we have had to contend. Grant us fair weather for battle. Graciously harken to us as soldiers who call upon Thee that armed with Thy powers we may advance from victory to victory and crush the oppression and wickedness of our enemies and establish Thy justice among men and nations.

The prayer worked. Patton won the battle and the Allies won the war. Patton awarded the Catholic Priest Father O’Neill a Bronze Star for his efforts to improve the weather.

This story was first published in the Charlotte Sun newspaper, Port Charlotte, Fla. on Monday, June 19, 2017 and is republished with permission.