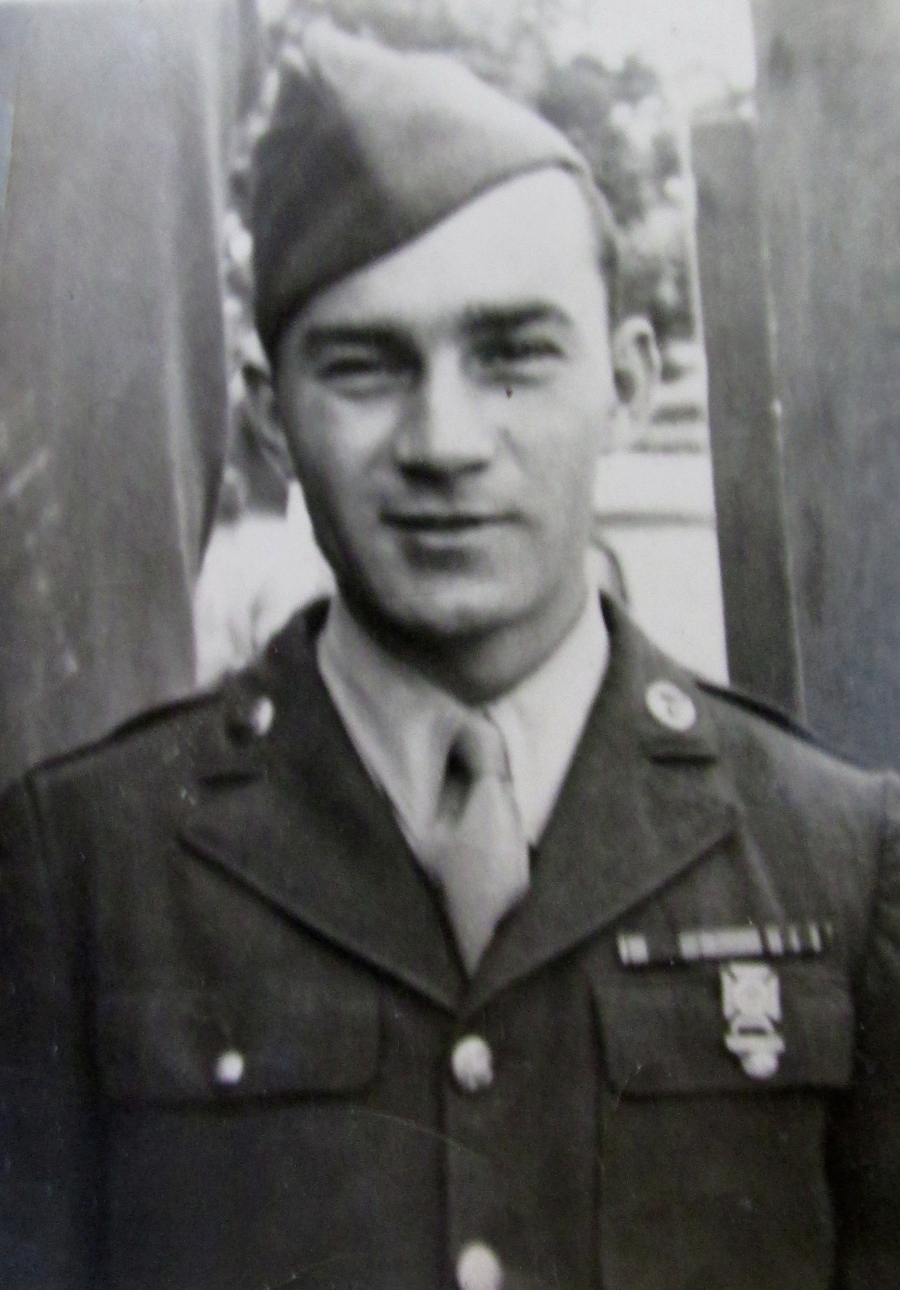 Pfc. Lavern Hampton of Port Charlotte in 1941 when he got out of boot camp at Camp Livingston, La. when he was 22 years old. Photo provided

The 98-year-old Port Charlotte, Fla. resident came ashore at Normandy on D-Day Plus 11 along with the other members of the 985th Ordinance Depot Company. He drove an 18-wheel trailer truck onto the sand and spent the next 11 months hauling supplies for Gen. Omar Bradley’s 1st Army and Gen. George S. Patton’s 3rd Army until V-E Day (Victory in Europe), May 8, 1945, when the Nazis unconditionally surrendered to Allied Forces ending the war in Europe.

Hampton never fired a shot at the enemy during the war. Recalling what happened to him more than 75 years ago on the battlefields of Europe was a challenge. He remembers certain instances, but forgets others.

“What about the ‘Battle of the Bulge?’” Hampton was asked. “What do you remember?”

“It was a scary deal for me. Our battalion headquarters was in Spa, Belgium, about 10 miles south of Bastogne,” he recalled. “The 7th Armored Division was coming down the road. A six by six (truck) loaded with ammunition developed engine trouble. They pulled over and took my truck and left me with the busted one.

“I tried to drive it, but I didn’t get very far. I pulled off the main road down a dirt road into a farmer’s field with the truck. There was a railroad track paralleling the main road. As we crossed over the tacks the truck quit completely.

“My buddy, who was with me, and I left the truck right there and we started walking back to where our company was bivouacked.

“Right about then, a couple of German tanks came down the road. Two P-38s (American fighter planes) flew over and bombed the tanks. They knocked them out as we watched.

“As soon as those bombs hit the tanks the people in the train jumped out the windows and ran toward a nearby woods,” Hampton said. “They disappeared.

“As we continued our hike back to the company area a flight of our B-17 bombers flew over. One of those bombers was shot down right over our head. We ducked under a little bridge to protect ourselves from falling debris.

“We saw no parachutes after the bomber was hit by enemy fire. I don’t think any of the crew members survived.”

It wasn’t long after that, Hampton and five other semi-truck drivers in his outfit were sent on what could have been a deadly night mission to rescue six trailers full of equipment left behind in the woods when the German’s massive offense at ‘The Bulge’ began.

“We were sent up the mountain and into the woods with our semis at night,” Hampton said. “On the way up we drove right by where they were fighting the ‘Battle of the Bulge.’ We could see the tracer bullets flying back and forth as we drove by. They were down in the valley fighting the war.

“We drove six miles into the woods, picked up those trailers and started to drive back with them,” he said. “It was so foggy you couldn’t see your hand in front of your face. The fog was so thick my partner in the cab with me had to stand on the passenger-side running board to watch out for the trees along that side of the road while I looked out for trees on my side.

“I was the last truck in the six-truck convoy. All at once I saw this large glow in front of us in the road. When we reached the bright light area we discovered a couple of flares burning and a barricade across the road. A few feet on the other side of the barricade a bridge across a little river had washed out and there was a 25 foot drop-off.

“I missed a turnoff a couple of miles back up the road where the rest of the caravan had cut off. I drove back, made the turn and returned to our company area with a trailer truck loaded with highly classified Norden bomb sites.

“So what happened to you after the ‘Battle of the Bulge?’”

“I can’t remember. All I can say is we were on the move all the time. I was picking up stuff at a supply depot in Belgium and bringing it back to our front lines.

“Crossing the Rhine River into Germany is the next thing I remember,” Hampton said. “I crossed a pontoon bridge at Remagen, Belgium.”

It was March 1945 when the American 9th Army captured the last bridge accidentally left standing across the river into the heartland of Germany. The Germans had unsuccessfully tried to dynamite the span, but for some reason they weren’t successful.

Soldiers from the 9th Army made a push into Remagen and fought their way over the bridge. Hitler had the officers charged with taking down the bridge shot for their failure.

By the time Hampton arrived with his trailer truck the Remagen Bridge, officially called the Ludendorff Bridge, had collapsed from over use by Allied troops who charged into “The Father Land” with as many soldiers as could cross the Rhine.

Hampton squats on the running board of his Federal-made semi-truck that had a top speed of 41 mph and went 3 miles on a gallon of gas. He drove it all over Europe with the 1st and 3rd Armies during World War II. Photo provided

When he reached the German side of the river it quickly became evident to Hampton the war in Europe was reaching a conclusion. Thousands of German soldiers were surrendering to American troops to escape the Russian Armies marching over everything as they fought their way into Germany from the East.

“At one point, as we were driving through Germany following our army, we had to pull over to allow a convoy of six-by-six trucks to pass. They were loaded with German POWs. They were driving fast and didn’t stop for anything as they took these enemy soldiers back to a POW camp behind our lines.”

“What do you remember about V-E Day (Victory in Europe)?

“I don’t think we held any celebrations,” he said. “We were just a small group not a big outfit.”

What Hampton does recall about the end of the war in Europe, was all the waiting the men in his unit did before being shipped back to the States. 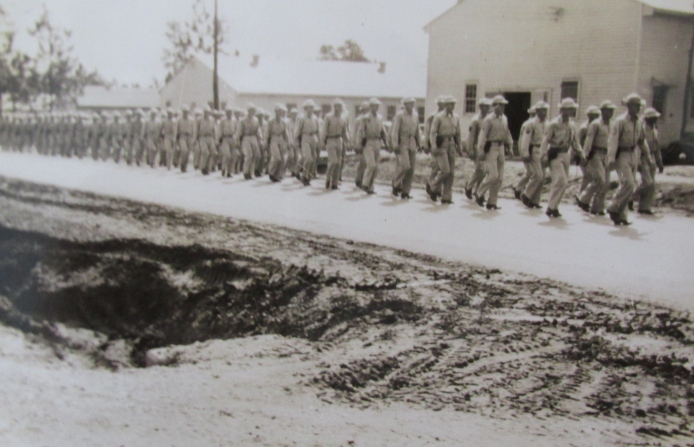 Learning to soldier with the 125th Infantry Division at Camp Livingston, La. before Pfc. Hampton was sent overseas with the 985th Ordinance Depot Co. to Europe. Photo provided

“We were sent back to a town east of Paris, I can’t remember its name,” he said. “We slept in an abandoned building and spent our time playing cards and getting three-day passes to Paris. There was nothing for us to do but ride the Paris subway for free because we were American soldiers.

“It wasn’t until October that we went aboard a troop transport headed for home. We had waited for months. As we sailed into New York Harbor passed the Statue of Liberty there wasn’t a dry eye aboard ship,” Hampton recalled.

He was discharged from the Army on Oct. 29, 1945 at the Separation Center at Indian Gap Military Reservation in Pennsylvania. Two weeks later he married his wife, Virginia. The couple had two children: Glen and Gerald.

Hampton went back to work for UniRoyal Tire Company in Detroit where he worked for the next 39 years. When he retired in 1979 he and his second wife, Beverly, moved to Florida.

This story was first published in the Charlotte Sun newspaper, Port Charlotte, Fla. on Monday, Oct. 24, 2016 and is republished with permission.

Click here to view Hampton’s collection in the Library of Congress.