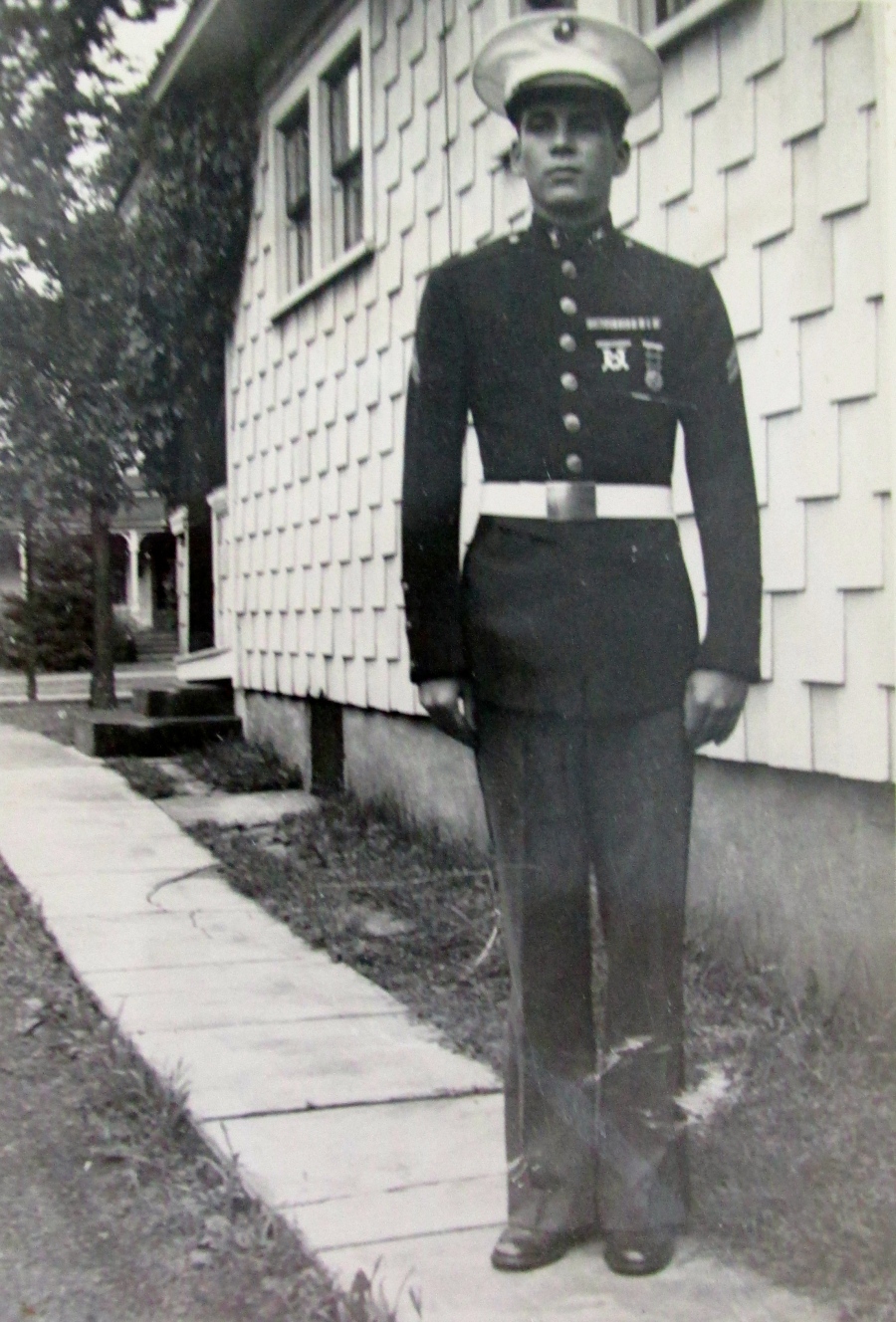 When Carl Cowin of Country Club Estates in Venice, Fla. sailed into Pearl Harbor he was a scared 17-year-old Marine. The Japanese had just bombed Pearl and almost all of the battleships in America’s Pacific Fleet were sunk in the harbor at dockside.

“We were the first Marines to arrive from the States after the bombing. When we sailed into the harbor things were still burning and there was smoke everywhere,” the 92-year-old ‘Leatherneck’ said. “I was surprised we could get into the harbor because junk was floating everywhere. The Battleship Arizona was still burning.”

He hadn’t finished his senior year in school when he convinced his parents he wanted to be a Marine. Cowin signed up on Sept. 26, 1941, a little over two months before the attack on the naval base in the Hawaiian Islands that launched the U.S. into World War II.

“They called us ‘Hollywood Marines.’ because we went to boot camp in San Diego,” he recalled. “Then they put us on an oceanliner in San Francisco and sent us to Pearl Harbor. I don’t remember the name of the liner, but I do remember we were attacked by Japanese subs shortly after our ship passed under the ‘Golden Gate Bridge.’

“A bunch of enemy subs were waiting for us right after we cleared the harbor. Our liner had a depth charge rack on its stern and we began depth charging the Jap subs. I think we were credited with sinking one of them.

“This was right after there was a public announcement about the Pearl Harbor attack. Once our ship cleared the submarines it took off and left the enemy behind. We sailed into Pearl a couple of days later,” he said.

“After that they sent our whole unit to the northern part of the island. We set up camp up there and provided protection on that end of the island because they thought they would return in force,” he explained.

“Our unit set up in an unspoiled part of the island right along a beach with 15 to 25-foot-tall waves crashing on shore. I’d never seen anything like that before. It was a beautiful place and it hadn’t been bombed,” Cowin said.

From there he was transferred to the big island where Honolulu is located. He became a member of a coastal artillery battery manning a 5-inch gun. He was a loader who carried the artillery shells to the breach and shoved them in. It took six of them to man one of these guns.

A few months later Cowin and a couple of dozen of his Marine Corps buddies were sent aboard a tiny native wooden boat to Johnson Island approximately 1,000 miles south of Honolulu in the Pacific.

“Johnson Island is actually two islands. The larger one the Americans used as a submarine refueling base. The smaller island was comprised of coral sand and it was beautiful. It was surrounded by crystal clear water teaming with fish,” he said.

“We were sent there to guard the sub base. We were also sent to establish a 5-inch coastal artillery gun emplacement along the beach,” Cowin said. I ended up as a loader on that 5-inch gun once again. I was out there a few months.

“It was 1941 at Christmas time. I was 17-years-old and homesick. I was on guard duty, the moon was bright as day time and looked exactly like snow back in my hometown of Eau Claire, Wis.

“All of a sudden I heard a loud radio. It was Bing Crosby singing a song I had never head before: ‘I’m Dreaming of a White Christmas.’ It didn’t help my misery at all. Tears ran own my face and I quickly looked around to make sure no one saw me. Marines don’t cry you know.

“Tokyo Rose came on and said: ‘You boys on Johnson Island, wouldn’t you rather be home sitting next to your pretty little girlfriend? Well, you know exactly what to do: Just stick together and you can do wonders with those hateful powers.’

“She sounded like she was from the Midwest. She didn’t have the slightest bit of accent.

“I never forgot Johnson Island. It was the best part of the war for me. I went swimming every day. Of course most of our job was laying barbed wire. Not long ago I was doing a little daydreaming—I wished I was 17 again. Then I leaned back in my easy chair and said maybe not.”

Cowin returned to the main Hawaii Island and again became a loader on a coastal artillery gun. His unit was still waiting for the Japanese to attack, but they never made it. In his spare time he and a number of the other Marines in his unit went pig hunting.

“The farmers in the area wanted us to kill the wild pigs that were destroying their crops,” he said. “Some of the other guys took their Thompson submachine-guns and used them to kill the pigs. I didn’t think that was right. I killed the pigs with my M-1 rifle.

“We were all shooting the pigs and stacking them up like cord wood. After we killed them I think the natives took them to eat,” he said.

“I think shooting wild pigs was the most useful thing I did during World War II.” 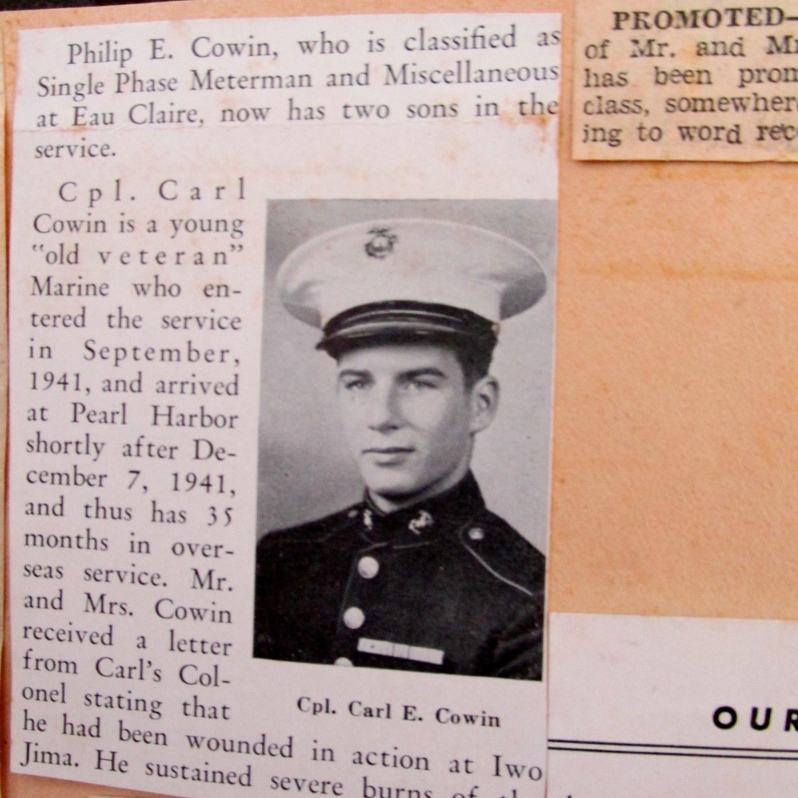 This is a picture of Cpl. Cowin out of his hometown newspaper. It accompanies a story that says he is returning home after serving 35 months overseas during the Second World War. Photo provided

Cowin was transferred to Guam after another Marine division had already killed or captured all the Japanese on the Island. What he remembers most about his time on the island is seeing Bob Hope and his group that showed up to entertain the troops and the explosion that put him in a Navy hospital for a year recovering from burns.

“I was involved in a gasoline explosion on Guam. I walked into this building and spotted a 5-gallon gas can leaking gas on the floor. I grabbed the can and took it outside. When I tried to put it down the can blew up an covered my chest and the whole front of me with flames,” he recalled decades later.

During Cowin’s 12 month recouperating in various hospitals started with the one on Guam. From there he went to a Naval hospital in Honolulu and finally he was moved to a third hospital not too far from his Wisconsin home. When he was released from the last hospital in the U.S. he was also discharged from the Marine Corps on Dec. 1, 1945.

Cowin spent most of his life, after serving in the Second World War, working for the U.S. Post Office. For 33 years he was a postal clerk in Augusta, Ga. He and his wife, Sally, moved to Venice 22 years ago. They have eight children: Terry, Carol, Danny, Adam, Stephanie, Arturo, Sarah and Shirley.

This story was first published in the Charlotte Sun newspaper, Port Charlotte, Fla. on Monday, May 23, 2016 and is republished with permission.

Click here to view Cowin’s collection in the Library of Congress.