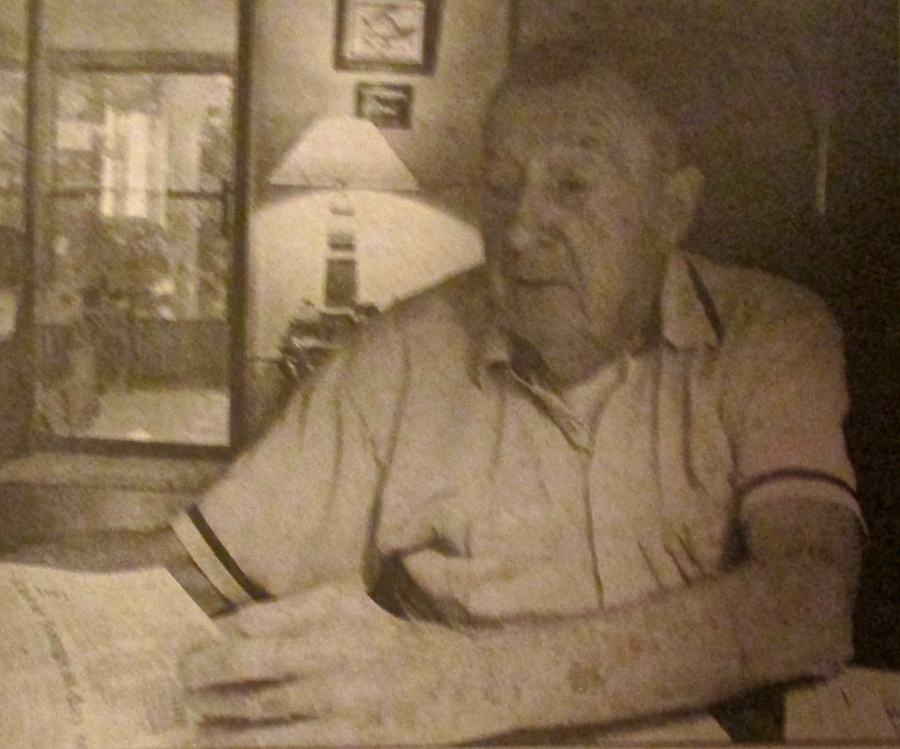 Ernie Rutherford of Sandalhaven in Cape Haze, Fla. pages through some of his World War II memorabilia. Sun photo by Don Moore

Ernie Rutherford of Sandlehaven in Cape Haze was aboard a Navy communication boat during the invasion of Normandy on June 6, 1944, one of the pivotal days of World War II. He provided me with the declaration of war by the Japanese against the United States and the British shortly before Dec. 7, 1941 and the Japanese government’s surrender to Allied Forces at the conclusion of the war aboard the Battleship Missouri anchored in Tokyo Bay on Sept. 2, 1945.

“We, by grace of heaven, Emperor of Japan, seated on the Throne of a line unbroken for ages eternal, enjoy upon ye, Our loyal and brave subjects:

“We hereby declare war on the United States of America and the British Empire. The men and officers of Our army and navy shall do their utmost in prosecuting the war, Our public servants of various departments shall perform faithfully and diligently the appointed tasks, and all other subjects of Ours shall pursue their respective duties; the entire nation with a united will shall mobilize their total strength so that nothing will miscarry in the attainment of our war aims.

“To insure [sic] the stability of East Asia and to contribute to world peace is the far-sighted policy which was formulated by Our Great Illustrious Imperial Grandaire and our Great Imperial Sire succeeding Him, and which We lay constantly to heart, cultivate friendship among nations and to enjoy prosperity in common with all nations has always been the guiding principle of Our Empire’s foreign policy. It has been truly unavoidable and are from Our wishes that Our Empire has now been brought to cross swords with America and Britain.

“More than four years has [sic] passed since China, failing to comprehend the true intentions of Our Empire, and recklessly courting trouble, distrubed [sic] the peace of East Asia and compelled Our Empire to take up arms. Although there has been re-established the National Government of China, with which Japan has effected [sic] neighborly intercourse and co-operation, the regime which has survived at Chungking, relying upon American and British protection, will continue to fratricide opposition.

“Eager for the realization of their inordinate ambition to dominate the Orient, both America and Britain, giving support to the Chungking regime in the name of peace, have aggravated the disturbances in East Asia. Moreover, these two Powers, inducing other countries to follow suit, increased military preparations on all sides of Our Empire to challenge us.

“They have obstructed by every means our peaceful commerce, and finally resorted to a direct severance of economic relations, menacing gravely the existence of Our Empire. Patiently We have waited and long have We endured, in the hope that our Government might retrieve the situation in peace. But our adversaries, showing not the least spirit of conciliation, have unduly delayed a settlement; and in the meantime, they have intensified economic and military pressure to compel thereby Our Empire to submission.

“This trend of affairs would, if left unchecked, not only nullify Our Empire’s efforts of many years for the sake of the stabilization of East Asia, but also endanger the very existence of Our nation. The situation being such as it is, Our Empire for its existence and self-defense has no other recourse but to appeal to arms and to crush every obstacle in its path.

It’s signed by Hideki Tojo, prime Minister, Minister of War and 11 other ministers.

“We, acting by command of and in behalf of the Emperor of Japan, the Japanese Government and the Japanese Imperial General Headquarters, hereby accept the provisions set fourth in the declaration issued by the heads of the Governments of the United States, China and Great Britain on 26 July 1945, at Potsdam, and subsequently adhered to by the Union of Soviet Socialist republics, which for powers are hereafter referred got as the Allied Powers.

“We hereby proclaim the unconditional surrender to the Allied Powers of the Japanese Imperial General Headquarter and of all Japanese armed forces and all armed forces under Japanese control wherever situated.

“We hereby command all Japanese forces wherever situated and the Japanese people to cease hostilities forthwith, to preserve and save from damage all ships, aircraft, and military and civil property and to comply with all requirements which may be imposed by the Supreme Commander for the Allied Powers or by agencies of the Japanese Government at his direction.

“We hereby command all civil, military and naval officials to obey and enforce all proclamations, orders and directives deemed by the Supreme Commander for the Allied Powers to be proper to effectuate this surrender and issued by him or under his authority and we direct all such officials to remain at their posts and to continue to perform their non-combatant duties unless specifically relieved by him or under his authority.

“We hereby undertake for the Emperor, the Japanese Government and their successors to carry out the provisions of the Potsdam Declaration in good faith, and to issue whatever orders and take whatever action may be required by the Supreme Commander for the Allied Powers or by any other designated representative of the Allied Powers for the purpose of giving effect to the Declaration.

“We hereby command the Japanese imperial Government and the Japanese Imperial General Headquarters at once to liberate all allied prisoners of war and civilian internees now under Japanese control and provide for their protection, care, maintenance and immediate trasportatation [sic] to places as directed.

“The authority of the Emperor and the Japanese government to rule the state shall be subject to the Supreme Commander for the Allied Powers who will take such steps as he deems proper to effectuate these terms of surrender.”

This story was first published in the Charlotte Sun newspaper, Port Charlotte, Fla. on Monday, Dec. 7, 2009 and is republished with permission.