Pvt. Mary O'Neil shortly after she joined the Women’s Army Corps (WACS) in 1943 at Fort Dix, N.J. where she worked until the end of World War II as a clerk types. Photo provided

When Mary O’Neil of La Casa Mobile Home Park in North Port, Fla. went to Washington, D.C. in 1941, she was an 18-year-old civilian clerk typist who had just graduated from high school in Houston, Mo. her hometown.

“I was a good typist and very good at shorthand. They needed typists in Washington in those days even though World War II hadn’t begun yet,” she recalled 75 years later. “I went to D.C. with my eighth grade teacher and stayed in her apartment to begin with.”

They both got jobs working for the government.

“I went to work for the Department of Munitions working from 9 a.m. until 4 p.m. five days a week typing. My job was to type inter-office memos all day long,” she said.

Mary and her husband to be Sgt. John O’Neil are pictured on the beach near Fort Dix, NJ in 1944 where they both served during World War II. Photo provided

Mary worked in a big, nondescript building in downtown D.C. She and 50 other typists pounded the keys in one large room in the Munitions Building.

“We were the first office to move into the Pentagon after it was completed and opened on Sept. 19, 1941,” she remembered. “When we weren’t working we were sightseeing around Washington. Two or three of us would walk around town checking out the sights.

“The sights were exciting to me because I was a girl from a small Missouri town. Washington was one of the most beautiful cities in the world.

“One day a couple of us went to Arlington National Cemetery when President Roosevelt was there. He was sitting in the back of a four door convertible. I took his picture,” she recalled.

It was a cold day, Oct 22, 1943, when Mary O’Neil and scores of other women were sworn into the WACs on the steps of the U.S. Capitol in Washington, D.C. Photo provided

“When the Japanese bombed Pearl Harbor on Dec. 7, 1941 we were all very sad. The next day, Monday, at work we gathered around the radio waiting for President Roosevelt to address Congress about the attack. FDR told Congress it was “…a day that would live in infamy.’”

During her first couple of years in Washington she worked as a civilian typist at the Munitions Building. What she really wanted to do was travel. Mary was advised if she joined the WACs (Woman’s Army Corps) she would get to see the world.

She and dozens of other young women took the oath to become WACs on the Capitol steps in late October 1943. She took basic training at Fort Oglethorpe, Ga., just south of Chattanooga, Tenn.

“I joined the WACs and they sent me to Fort Dix, N.J. which wasn’t nearly as exciting as Washington,” Mary said. “I spent the rest of the war at Dix typing reports in the fort’s reception center.”

The best thing that happened to her at Fort Dix, she met her future husband, John R. O’Neil. He was an Army sergeant who worked in the Records Department at the fort.

With the help of a friend who allowed the young couple to borrow his car during their time together their romance bloomed. But they didn’t get married until after the war.

She recalled it was April 1945, a few months before the end of World War II, and President Roosevelt unexpectedly died at his summer getaway in Warm Springs, Ga.

“When the president died everyone was sad,” Mary said. “Everyone loved FDR.”

She said this was about the same time a group of Italian POWs who were held at Dix for the duration of the conflict went wife hunting.

“The Italian soldiers were taken to New York City,” she recalled with a smile. “On VJ-Day most of them got married to American girls in New York City.” 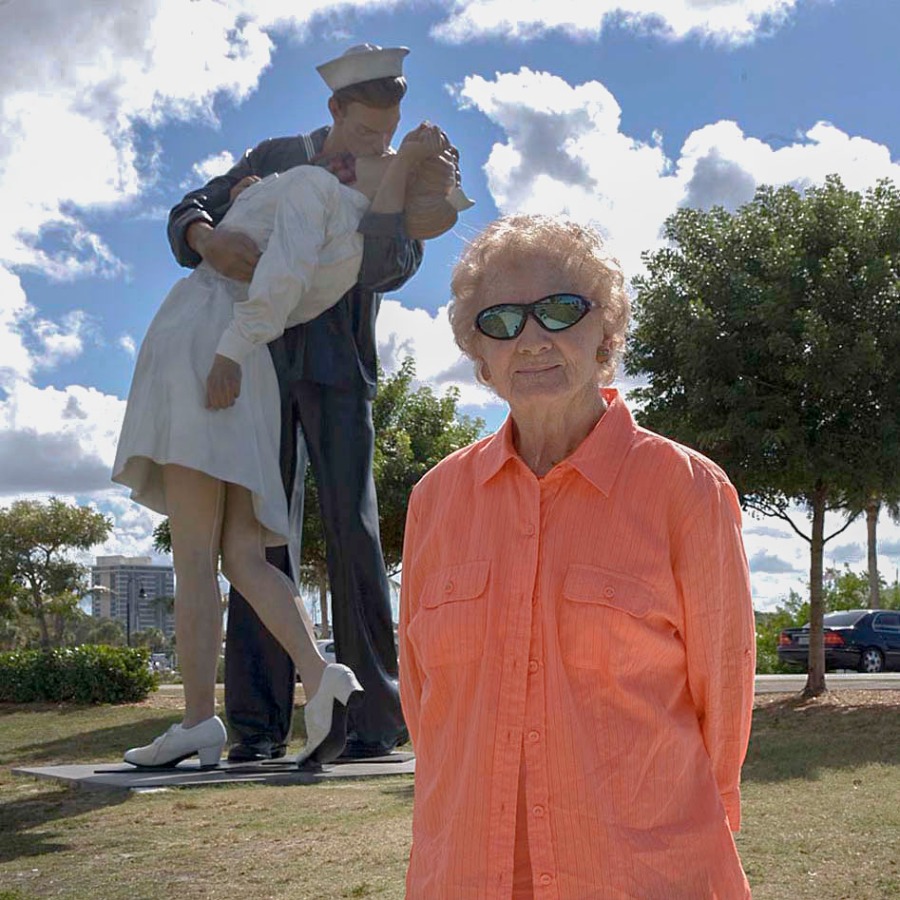 Mary stands in front of the statue along the Sarasota Bayfront recently copied from a photograph by Alfred Eisenstaedt’s that appeared in “Life.” The photo was taken at Times Square on VJ-Day (Victory Over Japan) Aug. 14, 1945 at the end of World War II. Photo By Tom O’Neil

She was discharged from Fort Dix in 1946. Mary went home to Missouri. It wasn’t long before former Sgt. O’Neil followed and the couple was married. They moved to Pittsburg, Penn where he worked as a plumber for decades and she became a housewife. They have two grown sons: John, Jr. and Tom.

“After my husband retired in the 1980s we planned to move to Florida. We picked out a lot in La Casa, but he died of lung cancer before we moved in,” Mary said. “I moved here April 4, 1985 and I’ve been here ever since.”

This story was first published in the Charlotte Sun newspaper, Port Charlotte, Fla. on Monday, Nov. 9, 2015 and is republished with permission.

Click here to view O’Neil’s collection in the Library of Congress.