This is 2nd Lt. George E. French shortly after graduating from flight school in 1942. He was 20-years-old and headed to the 13th Air Force in the Pacific to fly a B-24 “Liberator” bomber. Photo provided

George French piloted a B-24 “Liberator,” four-engine bomber in the Pacific during World War II. He was a member of the “Long Rangers,” the 370th Squadron, 307th Bomb Group, 13th Air Force flying most of the time from a base on Morati Island, southeast of the Philippines.

“My first mission was to the Japanese base at Rabaul at the end of September 1944. The Japs had thousands of soldiers at Rabaul, but they had no airplanes.”

“Tell me about your worst mission.”

“It was shortly after Gen. Douglas Mac Arthur invaded the Philippines on Leyte in October 1944. The Japs sent a fleet of battleships to break up the American landing on Leyte.

“Our 307th Bomb Group, had 28 B-24s intercept the Jap armada as it sailed north from Borneo toward the Philippines. We caught the enemy fleet before it could react to Mac Arthur’s landing on Leyte.”

They had seven battleships, including the Yamato and her sister battleship, the Musashi. At 73,000 tons and 18.1 inch main guns they were the biggest battleships ever built during World War II. In comparison, the USS Missouri, the battleship where the Japanese signed the surrender, only weighed 58,000 tons.

The U.S.Air Force didn’t know what it was doing on that raid. 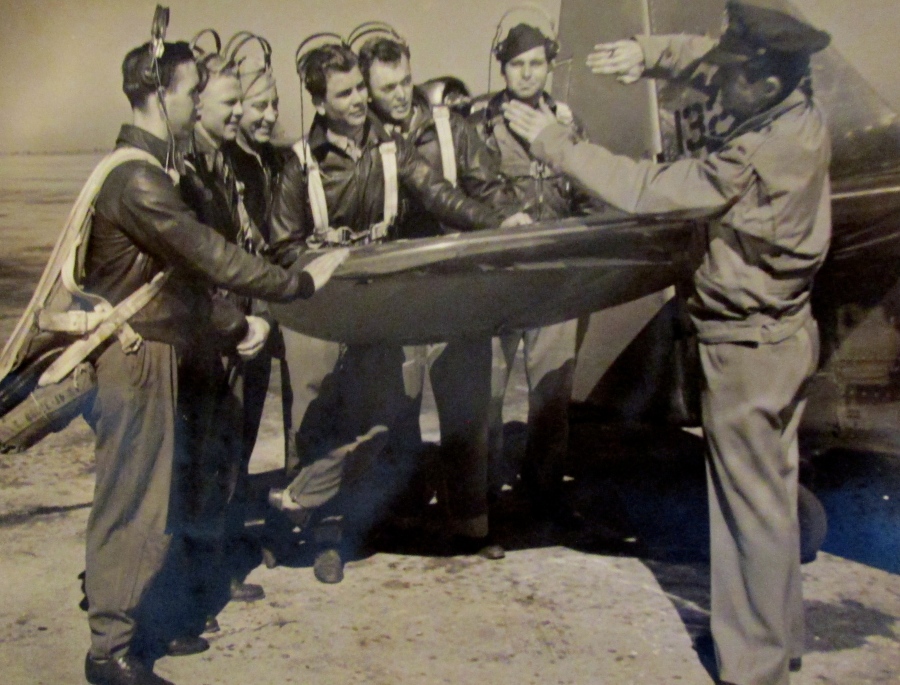 A flight instructor give a gaggle of young pilots-to-be tips on how to fly a Stearman PT-19 trainer in the background at a field in Muskogee, Okla. in 1942. French is the fifth would-be aviator from the left. Photo provided

“When we found the Jap fleet we flew over and bombed them at 10,000 feet. But we didn’t have the armor-piercing bombs we needed to do the job,” French explained. “As soon as we dropped our bombs the Japs took evasive action. They started twisting and turning to dodge our bombs.

“We scored few hits, but we got our fannies blown off. To the best of my knowledge we lost close to half of our planes.”

The Japanese fleet wasn’t successful either. It didn’t run Mac Arthur out of the Philippines. Before the shooting was over the general had recaptured the island nation and finally returned as he promised the people of the Philippines months earlier.

By then the Japanese had lost four of its mainline carriers during the Battle of Midway in June 1942 and most of its seasoned Navy pilots that flew from these enemy carriers. The Japanese would never regain the offensive during the remainder of the war in the Pacific.

After bombing the enemy battleships, French’s 307th Bomb Group lacked the fuel to fly back to their base on New Guinea. It was lucky Mac Arthur’s Marines had already captured the island of Morati that was several hours closer than their original base.

“When we landed at Morati we landed on new coral runways our Seabees had just finished. We bombed targets all through the Southwest Pacific from Morati. We hit targets like Borneo, Celebes and the Philippines.

“I flew a total of 45 combat missions. After the first 30 I sent my crew home,” French said. “I signed up for another 15 missions with a second crew.

“In my second crew I had ’Sabu the Elephant Boy,’ as my ball-turret gunner. He was a little guy from India who went to England, become a movie star and then moved on to Hollywood before the war.

“‘If we ever get through this war’ Sabu promised me one day, ‘I’m going to take you to Hollywood and introduce you to every star there.’

“I told Sabu, ‘If you shoot straight in your ball-turret we’ll all get back. I brought him back from the war.”

By war’s end, French was a captain. He commanded the 370th Bomb Group consisting of 28, B-24 heavy bombers in the Pacific.

“I flew my last combat mission June 30, 1945. Then I took the ocean liner USS Gen. Polk back to San Francisco. In addition to the soldiers there were 800 wives of men who had taken part in ‘The Bataan Death March’ aboard the ship. These women had been POWs of the Japanese, too. They slept in state rooms and we slept in the hole.

“When they dropped the first Atomic Bomb on Hiroshima our captain told us, ‘The U.S. had dropped a strange new bomb on a Jap city.’ Before we reached the States they dropped a second bomb on Nagasaki,” he recalled.

“We sailed under the Golden Gate into San Francisco Harbor on Aug. 15, 1945, but they wouldn’t let us dock. The problem: the city got torn up the night before by the military who was celebrating the end of the war. We had to sail three more days to Seattle, Wash. where we got off the ship,” French said.

He took a 7-day train ride from Seattle back south to Fort Shelby, Miss. where he was discharged from the Air Force. He joined Delta Air Lines in Fort Worth, Texas where he worked in operations waiting for a flying job.

About the time he was going to become an airline pilot the Air Force called him with an offer to join up again as a captain in the new Air Force. He signed up and was sent to Randolph Field. It was 1947 and he and his new wife, Jane, and their new son, George III, spent the next several years at Randolph Air Force Base.

French returned to the college campus in 1949 courtesy of the Air Force. He received his degree in Business Administration. At that point he was assigned to the Auditor General of the Air Force and spent the next two years in Alaska.

While in Alaska the Korean War broke out and French offered his services as a combat pilot. By then he was a major, but the Air Force wanted him to remain a bookkeeper. They made him director of the Southern District for the Auditor General’s Office.

In 1960-61 he spent a year in the Air Force War College in Montgomery, Ala. That year the college had a distinguished group of recruits.

He became friends with Col. Chuck Yeager, who broke the sound barrier some years earlier. Also in French’s class was Jimmy Jabara, the second highest American fighter Act in Korea with 15 kills and Robbie Risner, who was shot down over North Vietnam and survived seven years as a POW.

French completed his 24-year Air Force career a full colonel working as a trouble shooter for Secretary of the Air Force Eugene Zuckert and Gen. Curtis LeMay, Air Force chief of staff. Primarily he was in charge of the F-104G ’Starfighter” jet program during his last years working in the Pentagon.

He retired from the service in 1966 and immediately went to work as a civilian in Dallas, Texas. He helped build the F-7, “Corsair II” jet fighter plane that became a mainstay of the Air Force and the Navy.

French retired and moved to his home in Venice on Feb. 3, 2003. By then his wife, Jean, had passed away. He has six children who range in age from 67 to 50. Beginning with the oldest child they are: George III, Jean-Marie, John, David, Thomas and Daniel.

Part one was first published in the Charlotte Sun newspaper, Port Charlotte, Fla. on Monday, Aug. 17, 2015 and is republished with permission.