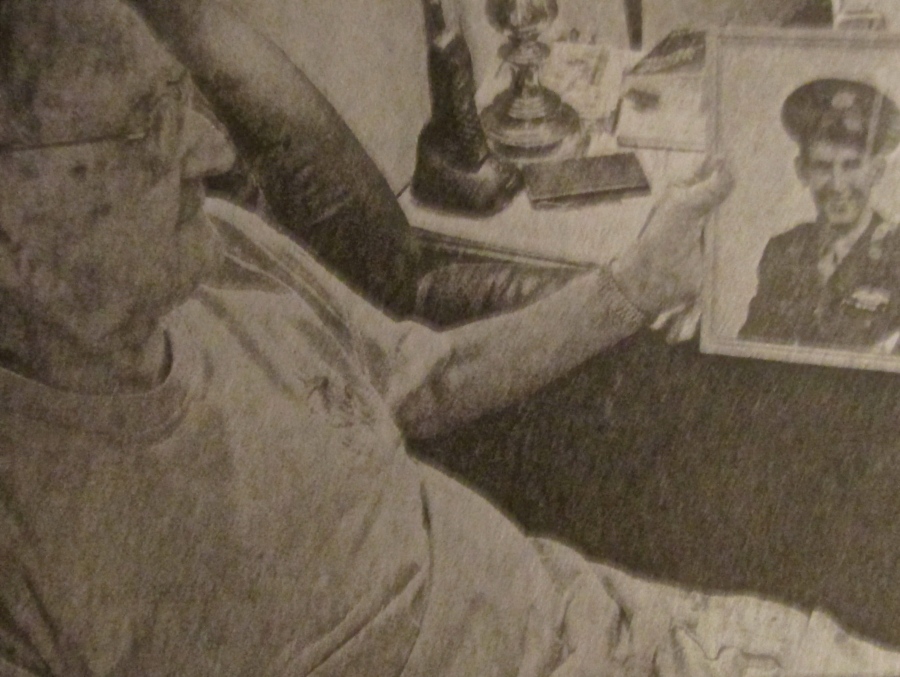 Bill Muldoon of Maple Leaf Estates of Port Charlotte, Fla. looks at a picture of himself when he served in the 2nd Battalion 19th Infantry Regiment of WWII and took part in the Philippine Invasion. Sun photo by Don Moore.

“We landed Easter Sunday morning, 1944, at Leyte and were immediately pinned down on the beach by Japanese artillery fire,” Muldoon recalled more than six decades later. “We spent that day and night on the beach and eventually broke out the next day and headed for the hills.”

The citation reads: “The Second Battalion, 19th Infantry Regiment is cited for conspicuous gallantry and the accomplishment of an extremely hazardous mission in action against armed Japanese military forces in the Leyte Island Operation of the Philippine Liberation.”

In short, Muldoon and his buddies spent the next three weeks battling the emperor’s forces in the hills and jungle of Leyte.

“After taking Hill 1525 in 21 days of continuous combat, the 692 men of the battalion were ordered to move into the Ormoco Valley and drive a wedge between two enemy regiments. It fought its way through the enemy screen over difficult mountain terrain, despite heavy rain and high winds, and on the 15th Nov. 1944, severed the enemy line of communication,” the citation reads.

As the battle was winding down, Muldoon and his infantry buddies were having a smoke and taking it easy when an incoming round from a Japanese mortar struck nearby, injuring two of them. He spent the next eight months in hospitals in the Pacific and stateside before being discharged from the Army in July 1945.

In October 1982, the old soldier and his wife, Nancy, returned to Leyte beach where he had fought years earlier. A story in a Manila paper noted in part, “‘Red Beach, Philippines — His hair thinning and his youth gone, William Muldoon returned in tears for the first time in 38 years to raise the United States flag over a strip of sand where his buddies fell under Japanese guns.'”

In attendance at the ceremony was Philippine President Ferdinand Marcos and diplomats from three countries to commemorate the 38th anniversary of the Allied landing on Leyte.

After returning from war, Muldoon went back to work with the New York Central Railroad, where he eventually retired. The couple moved to Port Charlotte in 2003.

This story was first published in the Charlotte Sun newspaper, Port Charlotte, Fla. on Thursday, August 27, 2009 and is republished with permission.