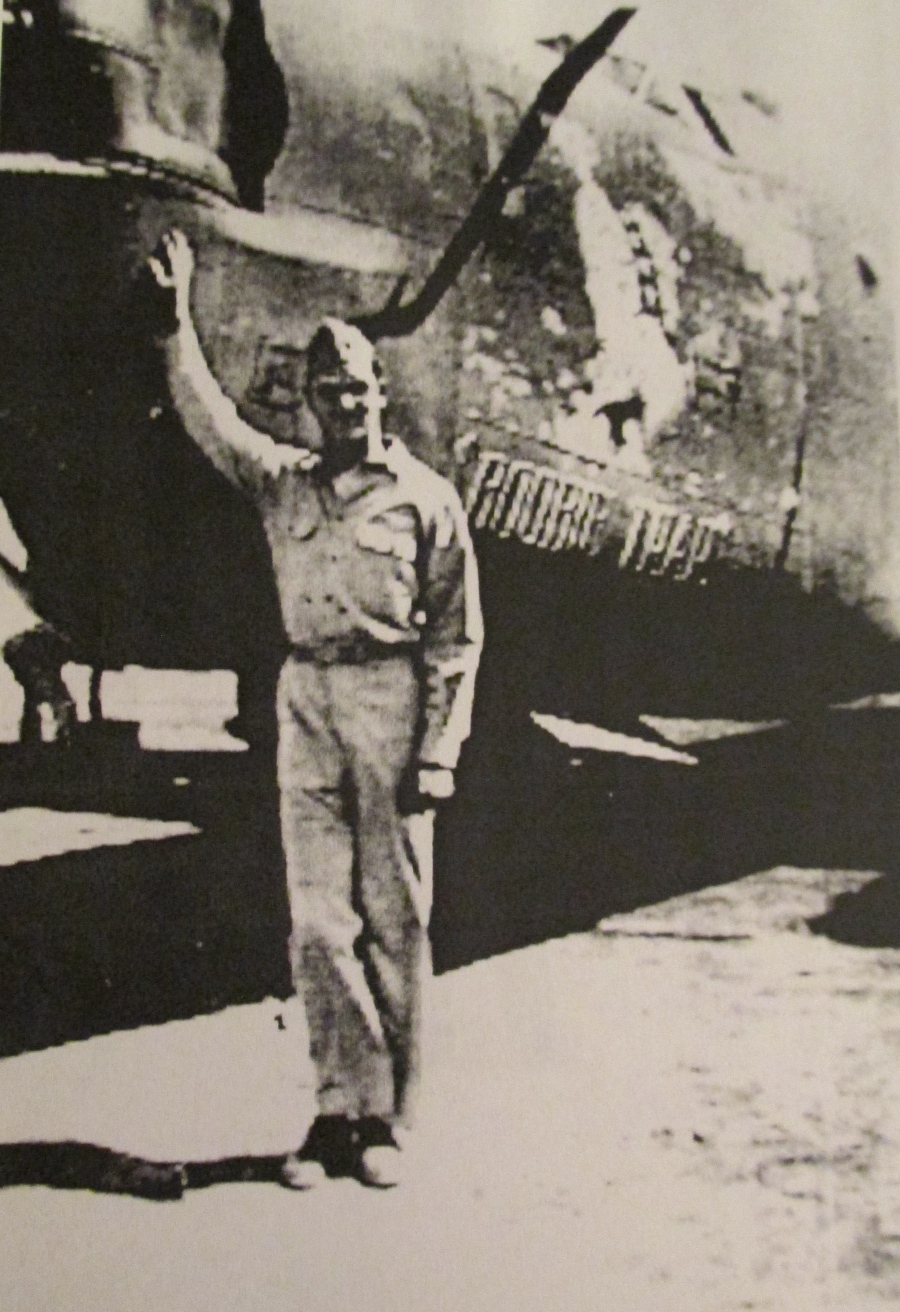 Staff Sgt. Wilbur Butler stands next to "Boobie Trap" a beat up old B-24 Liberator" that got him home every time no matter how bad the mission. Photo provided 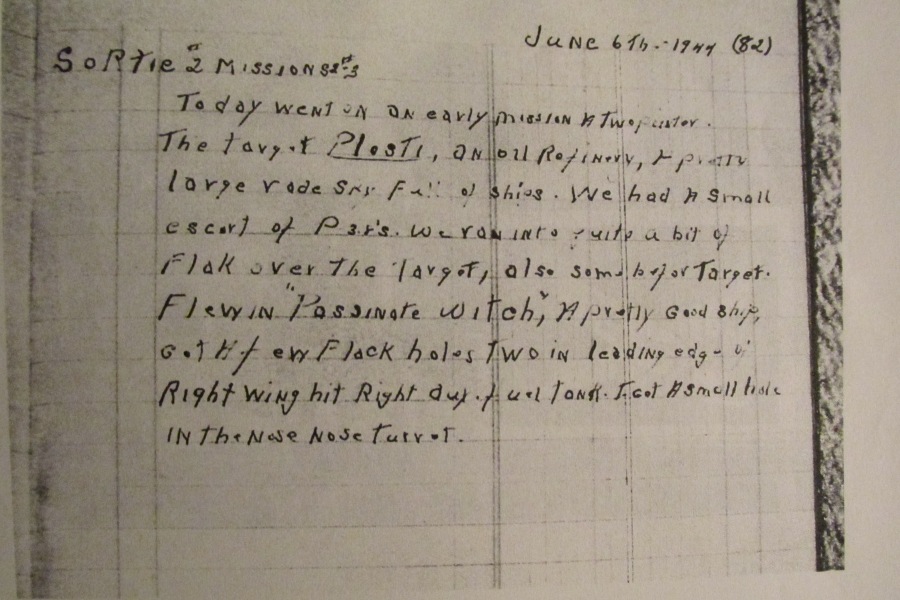 This page out of Sgt. Wilbur Butler’s flight log notes that on June 6, 1944 he made his first bombing run over the Ploesti, Rumanian oil refineries in a B-24 “Liberator” and the bomber sustained flak damage to one wing and the nose turret. Sun photo by Don Moore

On D-Day, June 6, 1944, when tens of thousands of Allied troops were storming the beaches of Normandy, France, Staff Sgt. Wilbur Butler was flying as nose gunner aboard a B-24 bomber called “Boobie Trap” on a mission to bomb the Ploesti oil refineries in Romania.

Before he and his crew completed 50 missions over enemy territory during World War II, they would fly over the oil fields in Romania eight more times. They were never easy flights because of the heavy enemy concentration of anti-aircraft guns protecting Ploesti that produced the life blood for the German war machine — oil.

“We would normally fly to Ploesti with several hundred other B-24s. As we got closer to the target, the flak (anti-aircraft fire) would increase,” said Butler, 83, who now lives in Port Charlotee, Fla. “The bombers ahead of you were being peppered with 88 fire, but you kept on going. You’d fly right through the flak because it was your mission. Most of the time after you dropped your bombs you felt better, but not at Ploesti because they kept after you with flak guns until you disappeared.”

It was 15 minutes of sheer terror. The final seven or eight minutes before the bombers reached their target at Ploesti they were under heavy enemy fire. It was the same thing flying out — another seven or eight minutes of hell as the B-24s flew through deadly puffs of black smoke spewing shrapnel that could knock out an airplane or kill a crewman.

“It was Aug. 17, 1944, and we were flying back to Ploesti. This particular day the enemy anti-aircraft guns were horrific,” Butler recalled as he sat in the den of his home on Dartmouth Drive. “Planes were going down all around us from the flak. We got hit bad. Flak shattered the nose turret where I was, damaged the bomb bay and cut our hydraulic and electric lines. Luckily, nobody was injured.

“Our pilot told us, ‘I’ll try and maintain altitude as long as I can. Then I’ll give the order to bail out,'” Butler said. “Then Sgt. Curtis Orwig, the engineer, and I went back and took some of the hydraulic lines out of the bomb bay and used them to repair damaged hydraulic lines that operated the wheels. About the time we got the lines fixed, we were almost back to our base.

“We always carried two extra gallons of hydraulic fluid with us. I put the fluid in the lines and the main wheels came down,” Butler said. “Then I went forward and lowered the nose wheel by hand with no problem seconds before we landed. This was the second time we had repaired the plane in flight.”

He received the Distinguished Flying Cross for his efforts aboard “Boobie Trap” that day.

“‘Boobie Trap’ was a junker as far as we were concerned. It was an old used-up B-24. It had patches all over it where flak had gone through. Somewhere along the way we got four brand-new engines on her. She may have been a junker, but I’ll tell you, she got us there and back a number of times,” Butler said.

He was becoming a seasoned crewman in a hurry. During his first half-dozen missions, he had some perilous encounters in the air aboard his B-24 “Liberator.” 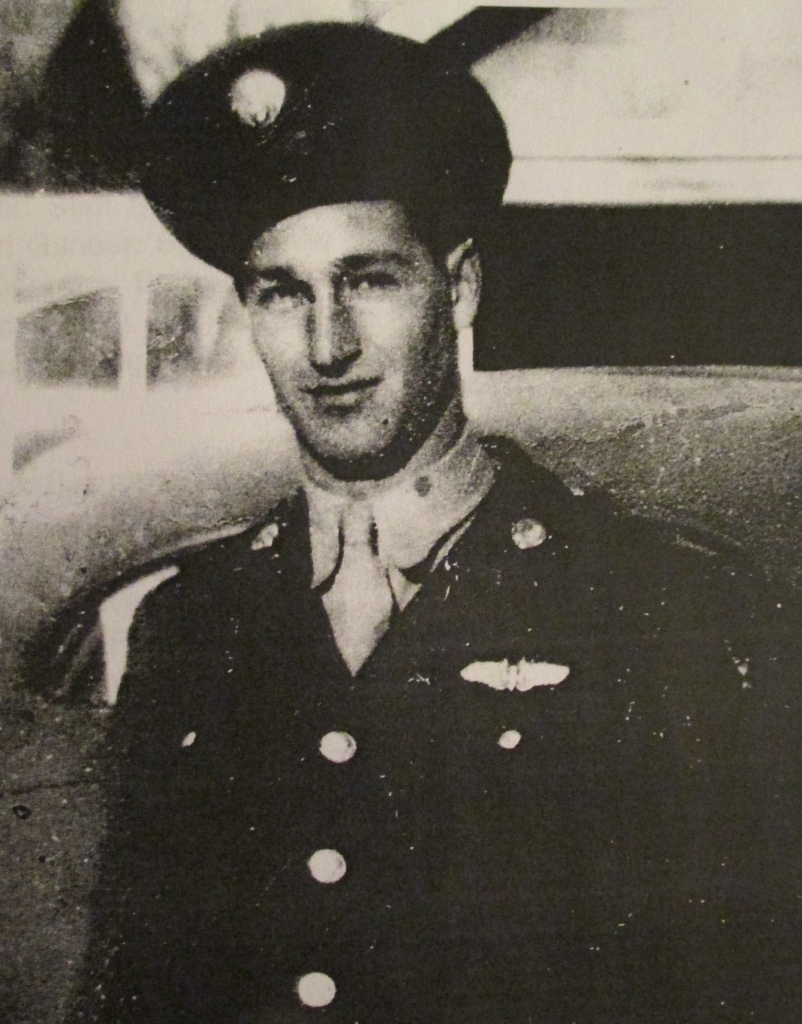 Butler just received his wings before he went to Italy and the 15th Air Force. Photo provided

Less than a month after arriving at their base at Manduria in the toe of Italy and becoming a member of the 722nd Squadron, 450th Bomb Group of the 15th Air Force, they went on a mission to Zebred, Yugoslavia, on June 30, 1944, that Butler will long remember.

Their target was an airfield at Zebred. They were flying at 25,000 feet during this mission.

“We were flying fourth position, and planes all around us were being shot down. A B-24 right in front of us got hit and started down. The prop wash from the doomed plane turned us up on our side 180 degrees. If our plane turned over, we would never recover,” Butler said. “We didn’t do that, but our B-24 began swinging back and fourth like the pendulum of a clock until the pilot stabilized our ship. I’ll tell you, our pilot did real good.

“When we got back to base, the guys flying in the planes around us said, ‘We thought you were a goner.'”

“During this run, our number three engine went out and another one of our engines lost its booster,” he said. “We couldn’t maintain altitude, so we dropped out of the formation.

“1st Lt. Thomas Feasel, our pilot, started looking for a place to land. He found a glider field,” Butler said. “He told us, ‘I know we can get her in, but I don’t know if I can get her out.'”

The emergency landing field was located just north of Rome.

“We made the repairs to our engine and flew back to base the next day,” he said. “By then, we were listed as missing in action.” 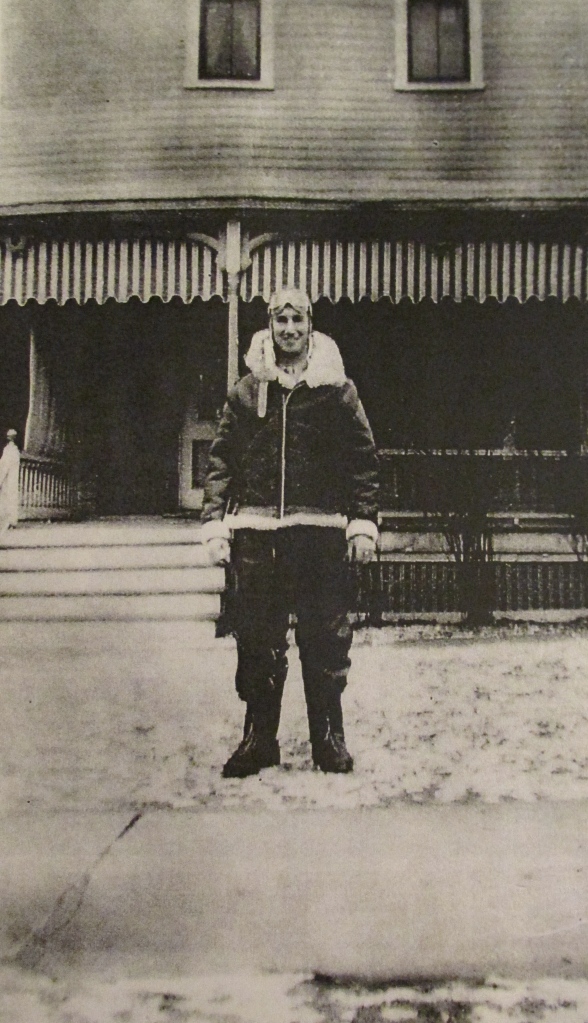 Butler stands in front of his Pennsylvania home during the war in his sheep skin lined flying suit. Photo provided

On Oct. 13, 1944, the crew of “Boobie Trap” completed their 50th mission. It was a flight over Vanhiva, Hungary, that was uneventful. Their target was a railroad marshaling yard. They sustained heavy-to-moderate flak, but the crew returned to base without any injuries.

“They went on a mission to Greece with another bomber crew. As they were circling the field on their return, they ran out of fuel,” Butler said. “Their B-24 crashed in a nearby vineyard. I don’t know how anybody walked away from the crash, but all 10 crew members did.

“Massey got hurt the worst. He suffered a broken arm and some bruises,” he said.

The Liberator was in worse shape. Both engines on the right side were ripped off the wing, and the tail of the big bomber was crumpled in the crash.

The crew came back home together, and after the war Butler returned to railroading, a job he had just begun when the Japanese dropped their bombs on Pearl Harbor. He and four buddies had gone down to the recruiting station four years earlier and signed up for the Army.

He would spend 40 years working most of the time for Con Rail as a conductor. He and his wife, Ellen, retired to Southwest Florida almost 23 years ago.

The members of the crew of the B-24 “Liberator” that flew with the 722nd Squadron, 450th Bomb Group, 15th Air Force include: 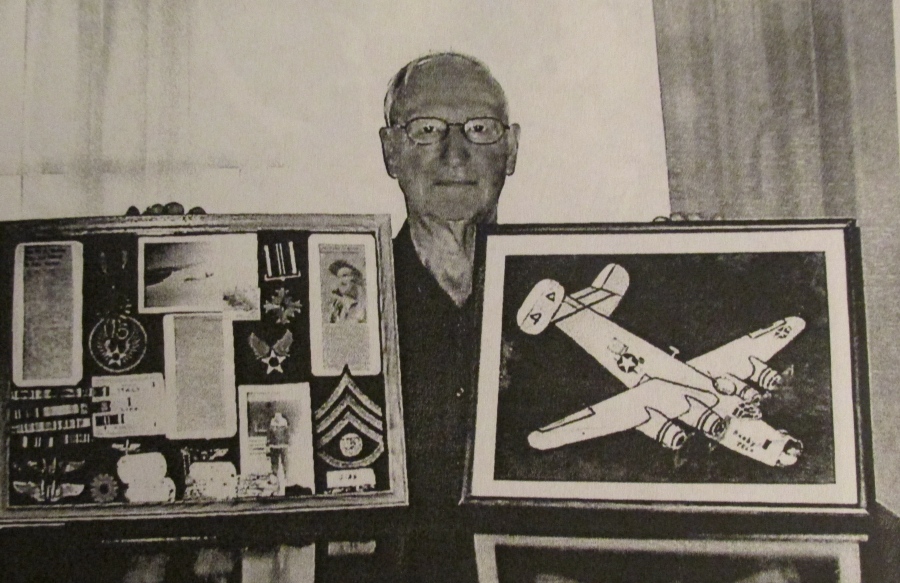 William Butler of Port Charlotte, Fla. is pictured today (9-23-2003) with a shadow box full of medals, ribbons and memorabilia from his four years of service during World War II. In the box at the left is the Distinguished Flying Cross and the Air deal with three oak leaf clusters which he received along with his sergeant stripes, wings and dog tags. At the right is a framed drawing of “Boobie Trap,” the B-24 he flew in most of the time. Sun photo by Don Moore

Staff Sgt. Wilbur Butler flew as nose gunner and engineer in a B-24 “Liberator” named “Boobie Trap” in the 15th Air Force during World War II. Here are the decorations he received:

This story was first published in the Charlotte Sun newspaper, Port Charlotte, Fla. on Monday, Sept. 29, 2003 and is republished with permission.