Meadows holds on to Bootsie, his pup, in the front yard of his parents' home in Flint. Photo provided

Sgt. Jerry Meadows holds on to Bootsie, his pup, in the front yard of his parents’ home in Flint, Mich. Photo provided

Staff Sgt. Jerry Meadows was in the 106th Infantry Division. He was in charge of a .30-caliber machine gun unit dug in on a hill along the German border on Dec. 19, 1944, during the opening days of the Battle of the Bulge in World War II. That afternoon, he was wounded and captured in the enemy advance near St. Vicht, Belgium.

His green division was moved into the front lines to replace the 2nd Infantry Division six weeks before the Germans began their last great offensive in mid-December along the Western Front. They were 10 or 15 miles above St. Vicht.

“It was supposed to be a quiet sector. We expected to get some training on battle tactics while in place,” the 80-year-old Port Charlotte man recalled 60 years later. “We were running patrols into enemy territory, trying to get information on what the Germans were up to.

“One thing I want to say is that a division normally covers approximately six miles of front lines. Our division was defending 26 miles,” Meadows said. “Our lines were thin and we were undermanned. We had very little ammunition, approximately 1,500 rounds for each machine gun and six rounds of 80 mm mortar ammunition per mortar. We hadn’t eaten in three days and we were dodging German tanks and infantry by then.”

Besides all these problems, it was freezing cold, snowing and sleeting, and well below zero. It was the coldest winter Europe had experienced in 50 years. At 5 a.m. Dec. 16, a German Panzer tank division, consisting mostly of 68-ton Tiger tanks, started moving toward the American front lines with cannons blazing. The mechanized division was supported by German mortars and artillery that rained down on Meadows and his men. 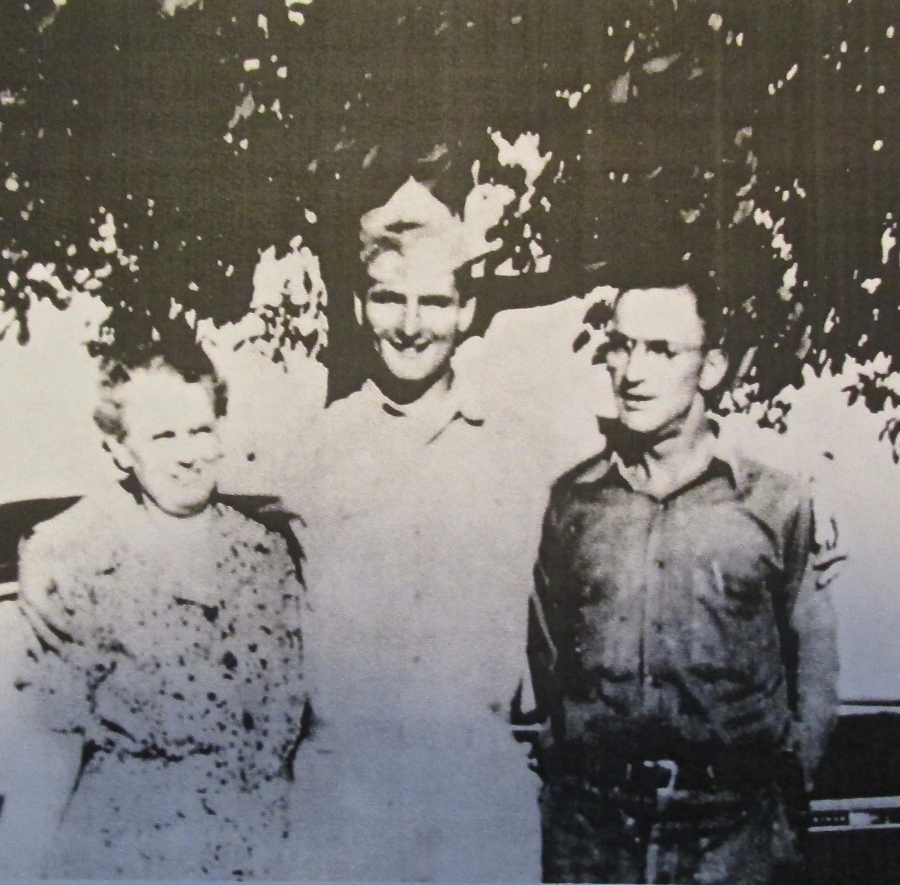 Meadows is shown with his mother and father, Maude and Jesse Meadows, in 1943, just before shipping out overseas at age 19. This picture was taken at his father’s Gulf service station in Flint, Mich. Photo provided

The Americans blew up the bridges to stop the tanks and held off the advancing enemy with an artillery barrage of their own. Three days later at about 2 p.m., Meadows’ platoon commander, a young lieutenant, ordered him to fire on a German halftrack below them in the valley.

“I tried to tell the lieutenant the halftrack was 1,500 yards away. That was the maximum range for our .30-caliber machine guns. I tried to explain to him our bullets would fall on the halftrack like rain,” he said. “‘Sergeant, I gave you an order! Open up on them!’ he demanded. “When we did, the German halftrack commander turned his 88 mm cannon on us. We took two direct hits that took out two of my machine guns and killed all six men in each machine-gun squad.

“On the third German salvo, I got hit in the left foot, left calf, right thigh and back with shrapnel. But my biggest problem was the concussion from the 88 projectile hitting us,” Meadows said. “I was bleeding from my ears, eyes, nose and mouth. I was knocked out for a few minutes but regained consciousness.

“My platoon lieutenant was lying beside me, injured. I suggested to him to tell everyone to play dead and maybe the Germans wouldn’t fire another round at us, but they did. You could hear the shrapnel cutting through the grass. It hit our platoon sergeant in the throat. He died beside me,” Meadows said.

He told what was left of his gun crews to leave him there and come back to rescue him later. They left and he lay flat on his back on the battlefield, waiting for the German advance. “The Germans walked right by me, but they paid me no attention because they thought I was dead. About 5 p.m., it was starting to get dark. I heard some German voices so I continued to play dead,” he said.

“Then I heard some American voices. I looked over and saw some of my people so I yelled at them. “My guys came over to me and the Germans were with them. I remember telling them, ‘Don’t you think you should take those weapons away from the enemy soldiers?’ One of my guys said, ‘Sergeant, you don’t understand. We’re prisoners of war.’ The last thing I ever thought I would be was a POW.”

Meadows found himself in a German-run hospital not far from where he had been captured.

“The medical officer in charge of the hospital told me, ‘Hang on, Sarg. We have no anesthetic. We’re gonna have to pull the shrapnel out of you without any anesthetic,'” he recalled. After a tough but successful operation, Meadows was bandaged and put in a barn with some other American soldiers from his division. On Dec. 22, 1944, Meadows was taken to a boxcar filled with wounded German soldiers and shipped to Koblenz, Germany, along the Rhine River. It wasn’t a pleasant trip.

He was placed in St. Joseph’s Hospital in Koblenz. It had been taken over by the German Army. He found himself on the third floor with a bunch of “flyboys” who had been shot down in B-17 and B-24 bombers flying bombing runs over Nazi-occupied Europe. The German Army hospital staff had no use for them.

They were using paper bandages on the POWs that stuck to their wounds. “There was this one poor guy who had the stump of his leg bandaged in paper. They would change his bandage every three or four days. He would beg them not to take the paper bandage off, but they had to,” Meadows said.

A couple of weeks later, Meadows was moved to another German Army hospital in Meiningen, about 80 miles from Berlin. He was gradually improving, but by then food had become a serious problem for the POWs. “There were 12 POWs to a table and they gave us one loaf of brown bread per table and each prisoner got a bowl of soup a day. That was it,” he said. “We had the guy who could slice the bread the thinnest cut it. We thought if we each got three thin slices it would seem like more than one thick slice.”

Meadows was about to be transferred out of the hospital to a German POW camp. He began walking around the hospital with the cast on his left foot to get used to walking again. 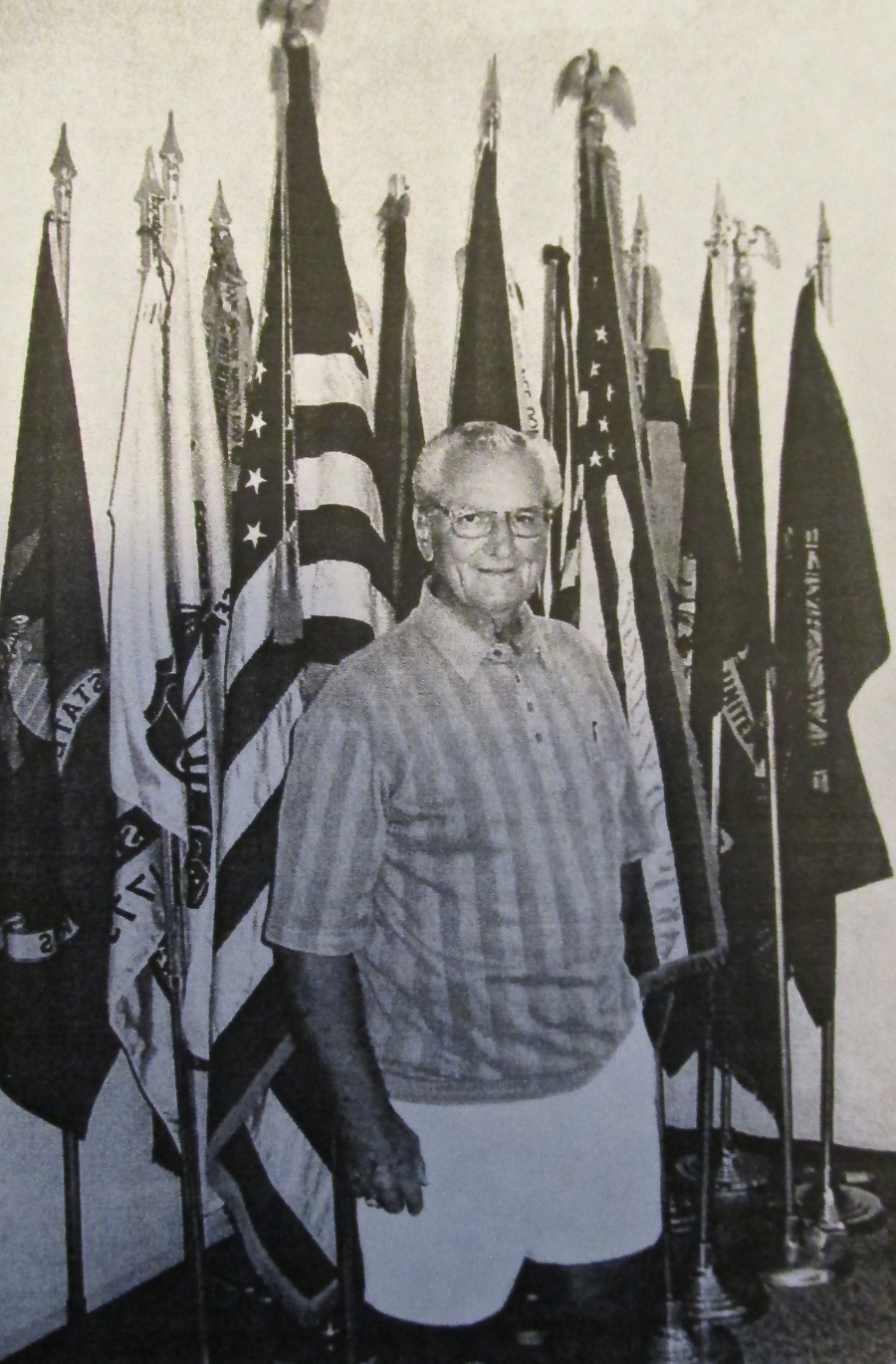 Jerry Meadows of Port Charlotte was a staff sergeant in the 106th Infantry Division. He was wounded and captured at St. Vicht, Belgium, during the Battle of the Bulge in World War II. He stands before the flags at American Legion Post 110 of Port Charlotte’s temporary headquarters, where he’s post commander. Sun photo by Don Moore

“As I walked along one day I looked down. There were maggots coming out from inside my cast. It was an eerie feeling because you knew those thing were eating on you,” he said.

“What I didn’t realize was they were saving my life by eating my rotten flesh. “On May 1, 1945, we were liberated by the American 11th Armored Division. I was taken to Frankfurt, Germany, and from there I was flown to a hospital in England,” Meadows recalled.

“They operated on my foot and saved it. I came back to the States on crutches and ended up in Percy Jones VA Hospital in Battlecreek, Mich., where I was discharged on Nov. 5, 1945.”

This story was first published in the Charlotte Sun newspaper, Port Charlotte, Fla. on Sunday, December 19, 2004 and is republished with permission.

The family will receive visitors from 1:00 p.m. until time of service. In lieu of flowers, memorial contributions may be made to Atwood Stadium Authority Fund, 501 S. Saginaw, Flint, 48501.

Gerald was born in Little Rock, Arkansas on July 12, 1924, son of the late Jesse and Maude (Buchanan) Meadows. He married Shirley A. Thomas on September 8, 1981.

He was Vice President at Blue Oil Company.

He was preceded in death by brother, Harold. The family would like to say a special thanks to Brian’s House of Davison. Please share your thoughts with the family at www.allenfuneralhomeinc.com