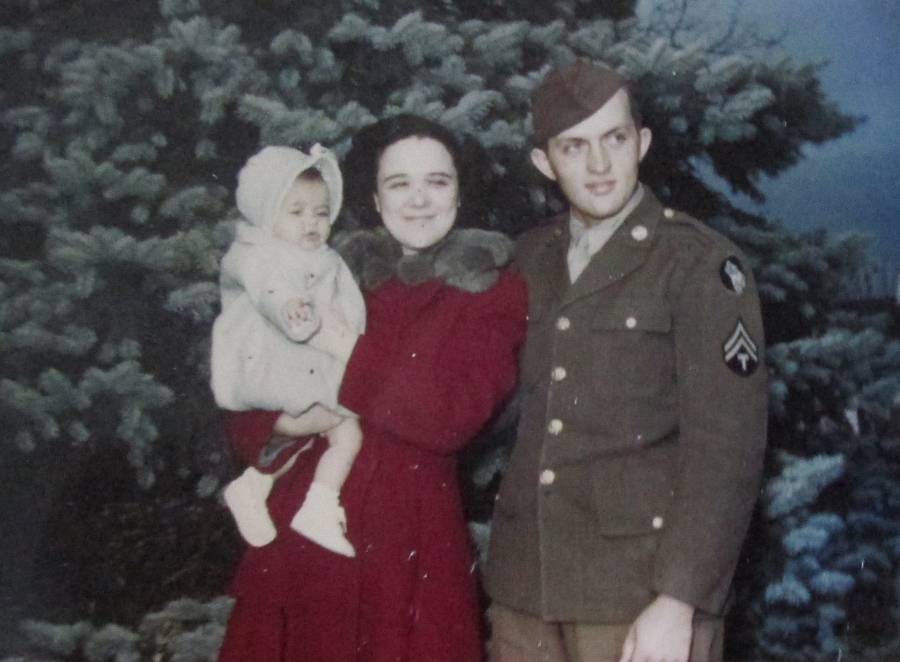 At Christmas 1942 Ralph Cook of Venice with his wife, Dorothy, and their first child, Janice, at home in Lakeside, Mich. Photo provided

Ralph Cook of Venice, Fla. ended up a chaplain’s assistant serving with the 104th  Timberwolf Division in Europe during World War II after flunking an eye exam to enter pilot training in the Army Air Corps.

“We landed at Cherbourg, France on D-Day plus 90. We were the first American division to go from the States directly to the continent of Europe without stopping in England or Scotland,” the 93-year-old former solder explained,

“I became a chaplain’s assistant after I was in France about a month. Among my duties was to write condolence letters to the parents of soldiers who died in our division,” Cook said. “That was a hard job.

“In our division we had a Protestant and a Catholic chaplain. I was Protestant Chaplain Maj. Paul Walker’s assistant, a Congregational minister from Nashua, N.H. We were part of the 104th headquarters unit and not on the front lines.

All that changed when the Timberwolves took part in the Battle of the Bulge, the largest battle on the Western Front during World War II. It began on Dec. 16, 1944.

“Our division was the last division between the German Panzer army and Antwerp, Belgium, a port they were trying to capture. During the battle we were strafed by ME-109s (fighters) and they sent German soldiers dressed as Americans to infiltrate our lines.

It was shortly after Cook and thousands of other American soldiers survived “The Bulge” when Chaplain Jackson, the Catholic chaplain from St. Louis, went out with the Red Cross to pick up wounded. He stepped on a ‘Bouncing Betty’ anti-personnel mine and was killed.

“We held a burial for the chaplain at the same time German buzz bombs were flying over our service on their way to England. As long as you could hear these bombs you were safe. If they cut out you had a problem.

“German POWs dug the chaplain’s grave and lowered him into it. Unfortunately there were two or three inches of water in the bottom of the hole. There was nothing we could do about it.

“About the time we completed the funeral an army truck rolled up. It was filled with the bodies of dead American soldiers. More POWs pulled a metal coal chute from the truck and began sliding the bodies down the chute to the ground.

“The dead soldiers were lined up shoulder-to-shoulder on the ground face up in the rain. There was an identification tag attached to each soldier’s toe that provided details about the dead man.The scene was demoralizing. It was at this point the devastation of war hit me hard,” Cook recalled almost 70 years later as he shook his head.

The war continued and so did the soldiers of the 104th Timberwolf Division. They captured the Siegfried Line with little trouble and moved into Remagen and crossed the pontoon bridge built by American troops after the original bridge across the Rhine collapsed. Aachen, the first town east of the Rhine in Germany captured by American forces.

“Aachen was pretty much a bombed out city. The American Air Force leveled the place. Most of the civilians were gone,” he said.

“At one point we ended up in Brand, Germany. This was the home town of Marlene Dietrich. We lived there for about a month in what had been a Hitler Youth camp in brick barrack with running hot and cold water,” he said with a smile.

“Cologne was another devastated city we captured. The only thing standing was the Catholic cathedral,” Cook said. “When I returned to the city in 2000 the whole area around the church had been rebuilt complete with a McDonald’s restaurant.” 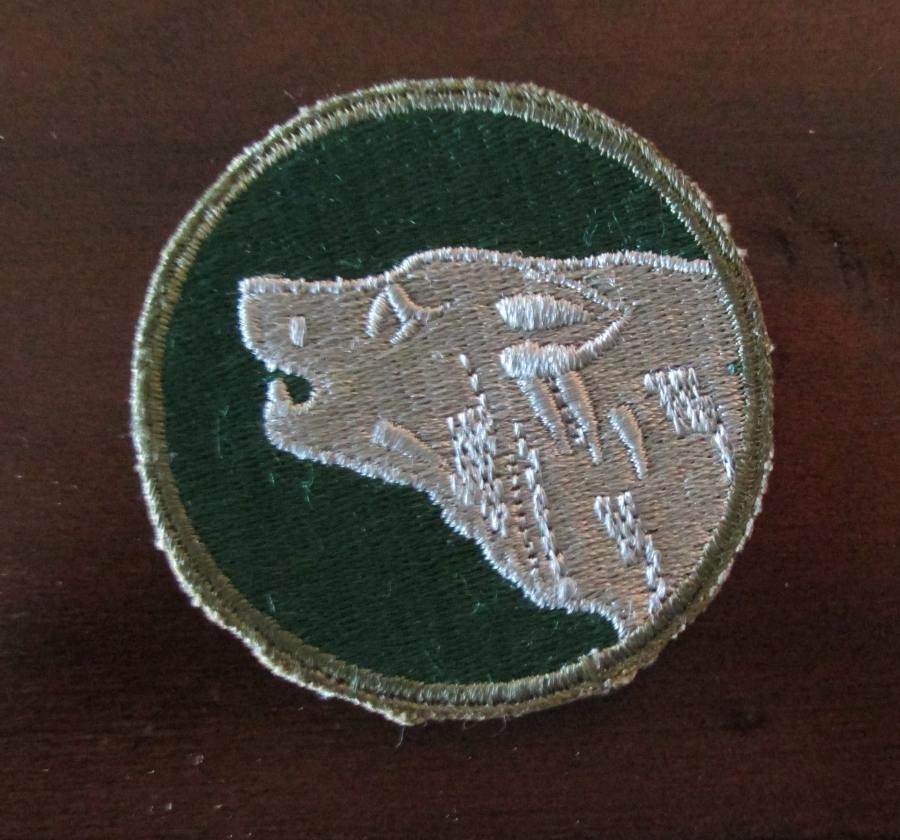 The 104th Timberwolf Division shoulder patch was the one worn by Ralph Cook in Europe during the Second World War. The division was commanded by Gen. Terry Allen who had commanded the 1st Army earlier in the war. Sun Photo by Don Moore

By this time the German army was disintegrating. Cook said they captured 11-year-olds on the front line fighting for Hitler. At the same time tens of thousands of seasoned German soldiers were surrendering to American forces. They didn’t want to surrender to the Russians.

The 104th battles through Germany went on and on during the closing months of the Second World War. Stolberg, Eschweller and Weisweiler were captured by the Americans. Then came the Roer River crossing the 104th completed at night with little resistances from German troops. Lamerdorf, Inden, Lucherberg, Pier, Merken and Schophoven were all cities that fell to the Timberwolves in their continuous advance across the “Fatherland.”

Finally the division was forced to hold it’s ground at Hallen, Germany and let the Russian troops take Berlin.

By this time Cook learned Harold, one of his younger brothers, had been captured and was a German POW.

“He was pinned down in a German mortar attack while on patrol and taken prisoner, he explained. Later Harold was put on a POW train that was bombed by Allied forces and captured by American troops.”

Harold survived the war as did his youngest brother, Glen, who served in the Air Force as a photographer.

When V-E (Victory in Europe) Day arrived Cook was still in Hallen waiting for something to happen.

“When we got the word the war was over in Europe it was a happy day for us,” he said. “I ended up at Camp Lucky Strike at Le Havre, France were I got aboard the liner Monterey. We arrived in New York Harbor on July 2, 1945.”

After a 30 day leave he was sent to California where he was discharged.

“I returned to my old job at Swift & Co. where I worked for 30 years. Then I went to work for Major Chemical and retired 19 years later as Vice President of International Sales in 1978,” he said.

He and his wife, Dorothy, moved to the Venice area in 2004. They have a daughter, Janice, and two sons, Phillip and David.

This story was first published in the Charlotte Sun newspaper, Port Charlotte, Fla. on Monday, Nov. 24, 2014 and is republished with permission.

Click here to view Cook’s collection in the Library of Congress.