When this picture was taken on Dec. 20, 1943 Bob Porter of Venice was just graduating from boot camp at Parris Island, S.C. He was 17 and about to be turned into an amphibious landing craft mechanic who would fight on Iwo Jima during World War II. Photo provided

When this picture was taken on Dec. 20, 1943 Bob Porter of Venice, Fla. was just graduating from boot camp at Parris Island, S.C. He was 17 and about to be turned into an amphibious landing craft mechanic who would fight on Iwo Jima during World War II. Photo provided

Bob Porter of Venice, Fla. served as a sergeant with the 5th Marine Division in World War II. He was with the first U.S. Marines killed or wounded at the Battle of Iwo Jima during the closing days of the Second World War.

“I was in the fourth wave that hit the beach the first day. I was an amphibious tractor mechanic. It was my job to keep the 20 landing craft in my wave running so they made it to the beach,” the 88-year-old resident of Jacaranda Trace Apartments said. “We had just passed the ‘Line of Departure’ when our landing craft took a direct hit from a Jap heavy artillery shell.

“Sixteen of the Marines in our tractor were killed immediately when the landing craft was blow apart. Seven others were horribly wounded. Navy boys in LCVP (landing crafts) were immediately at the scene and picked up what was left of us. They took us to a nearby hospital ship,” he recalled.

Miraculously Porter didn’t receive a scratch from the catastrophic explosion. The medical staff on the hospital ship gave the 17-year-old “Leatherneck” a shot of brandy and sent him on his way.

“No rubber tire vehicle could operate in the black volcanic sand of Iwo Jima. The only vehicle that moved on that sand were LVT-4 (landing craft) like the ones we had and ‘Weasel’ which were tracked Jeeps. They could scoot right along but they couldn’t carry much.”

After a couple of days the Seabees came ashore and put down steel plates which were primarily used to establish a quick runway for American fighter planes. They used these runway plates to make roadways in the sand at Iwo that rubber tired Jeeps and trucks could use without getting stuck.

“Our fourth day on Iwo Jima they put up the flag atop Mount Suribachi. I don’t remember seeing it go up, but I knew it did when ships off shore began sounding their whistles in celebration,” Porter said.

Marines had hardly captured the Japanese airstrip on Iwo when the first B-29 “Super Fortress” made an emergency landing on the too short runway. Before the fighting stopped and the war ended more than 20,000 American air crewmen’s’ lives were saved by making emergency landings on Iwo. 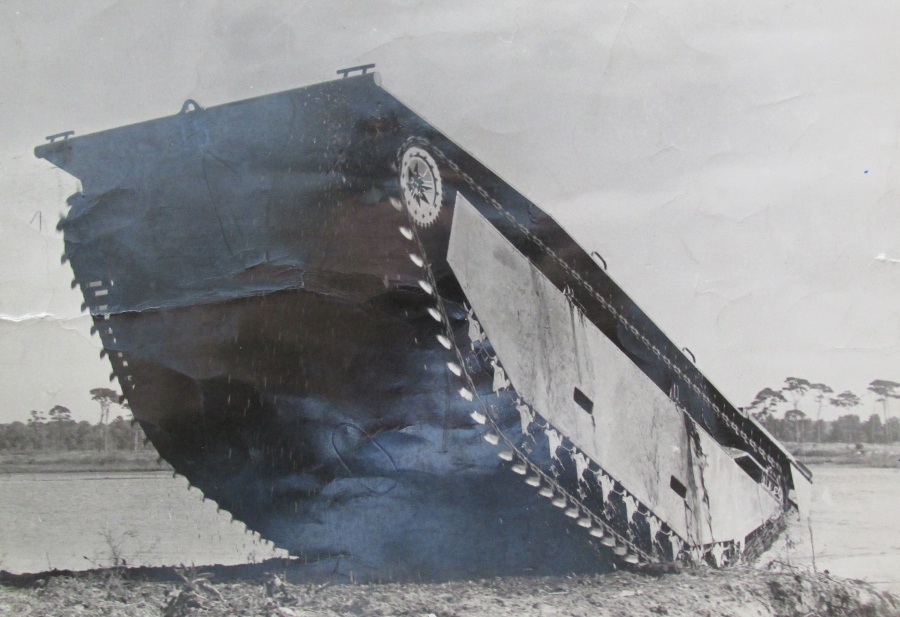 This is an LVT-4 landing craft that could bring 34 fully-equipped Marines into an enemy-held Pacific Island beach during the Second World War. It could move at 8 mph in water and 38 mph on land. It was one of the few vehicles capable of moving on Iwo Jima’s black volcanic sand beaches. Photo provided

Much of Porter’s 30 plus days on the Japanese-held Island he was involved in ferrying ammo and supplies to the beach and taking wounded Marines back to waiting ships off shore where doctors immediately went to work.

“After a while there wasn’t much for us to do, so we volunteered to go up to the front line and relieve the troops at night. I distinctly remember being on top of a ridge one night and I asked one of the guys up there with me, ‘What’s the password?’

“All night long the Japs were throwing grenades up on our hill. Fortunately none fell in our foxhole. Night combat is very interesting. Flares are in the air all the time. When they explode they show every formation on the ground that’s moving.”

Porter only spent four nights at the front. After that he went back to being involved in keeping the landing craft supplying the troops ashore filled with supplies and evacuating the wounded.

“When we left Iwo we only had one tractor that worked. The other 100 landing craft that were part of our battalion were shot up and wrecked or completely destroyed in the battle,” he said.

The 5th Marine Division sailed back to Hawaii and started preparing for the invasion of the Japanese home islands. On the return trip other Marine divisions landed on Okinawa and fought the costliest battle in the Pacific for both sides.

Pfc. Porter is horsing around on the back end of a stead with two Marine Corps buddies in a San Diego, Calif photo studio before being shipped overseas in 1944. Photo provided

“We were still in Honolulu when FDR died. Then the first Atomic Bomb was dropped on Hiroshima. Three days later a second bomb exploded over Nagasaki and a few days later the Japanese ‘unconditionally surrendered’ to Allied forces.

“After the wars half of our division went to Japan as occupation forces and the other half stayed state-side. Since I had enough points to get out of the Marines I stayed in Hawaii.

“After returning to the States and going home for 30 days on leave I returned to Camp Lejeune in California until I was discharged from the Corps on 22 Sept. 1945,” he said. “I decided to say in the Marine Corp Reserves after the war. I was called back in 1951 and spent 13 months during the Korean War training Marines at Camp Lejeune.

“After the Second World War I got my high school diploma and then took the G.I. Bill and became a body and fender repair shop repairman for a few years. I was solicited by a paint manufacturer to sell their product which I used a lot of to paint cars.

“Eventually I became the regional sales manager for the firm in 1954. Later on I was the General Manager of the company until it was acquired by BASF in the early 1980s. That’s when my wife, Dorothy, and I moved to Florida. We had two daughters: Penny is our oldest, and Cheryl, our younger daughter, unexpectedly died in her 50s.

This story was first published in the Charlotte Sun newspaper, Port Charlotte, Fla. on Monday, Nov. 10, 2014 and is republished with permission.