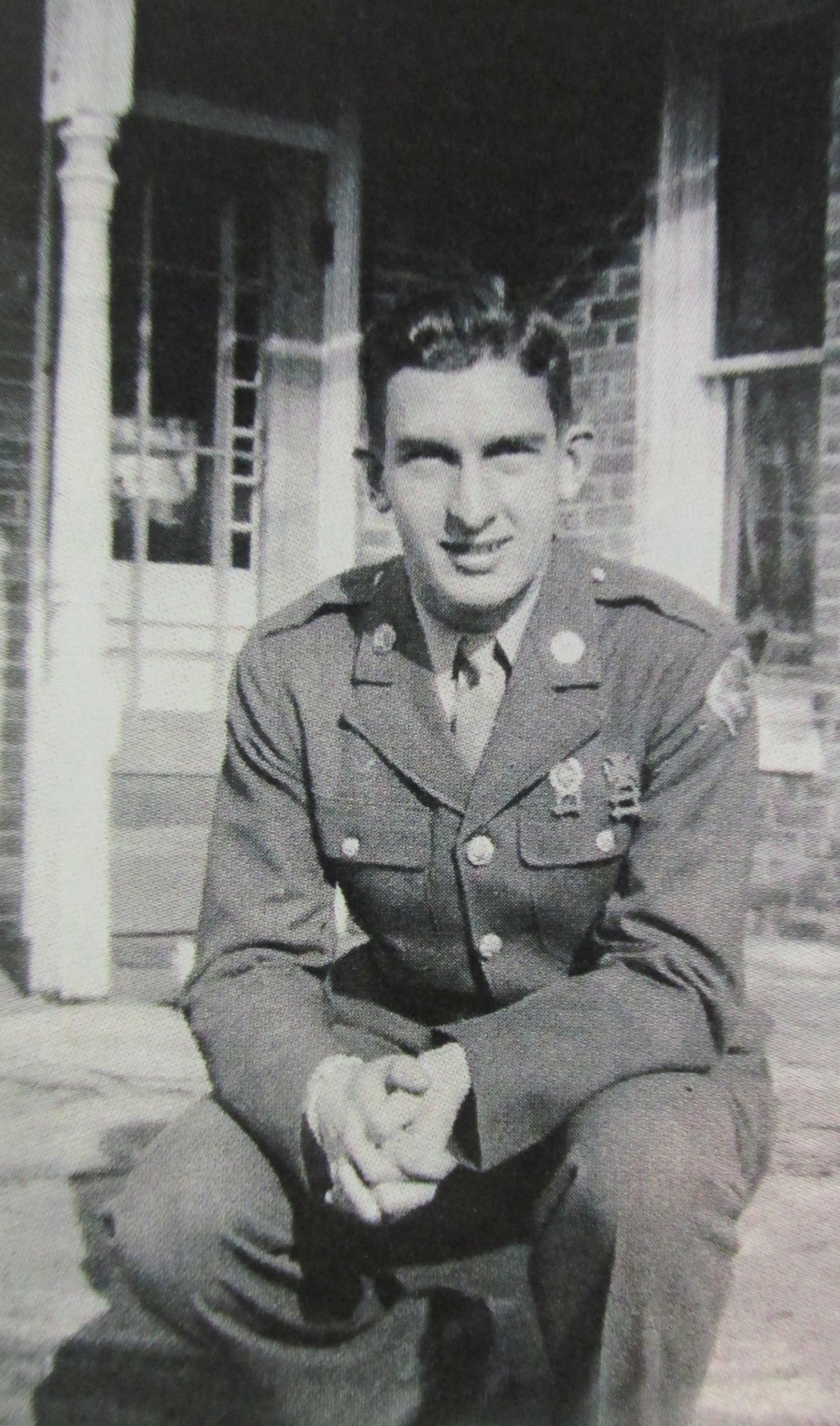 Pfc. Keith Jones is pictured in front of his parents' home in Endeavor, Wis. He was 18-years-old and waiting to be shipped to Europe as part of Gen. George Patton's 3rd Army. Photo provided

Keith Jones was too skinny to get in the Navy in 1942, but the Army took him anyway despite his lack of weight. He became a member of the 87th Infantry Division, part of Gen. George Patton’s 3rd Army in Europe during the Second World War.

“I went down to join the Naval Reserve and flunked the physical because I was too thin. They told me to come back in a month and retake the physical. I did and flunked it a second time. So I decided to go into the Army,” the 90-year-old Nokomis,Fla. resident recalled more than 70 years later.

After basic training Jones joined the 87th Infantry Division before taking part in the European Campaign. A chance comment would change his military career and probably saved his life.

“We were taking bayonet practice back in the States and our sergeant asked us all, ‘Can anyone here type?’ I raised my hand, so they made me the regimental supply typist. This is probably the only reason I’m here today and able to tell my story.

“We sailed across the Atlantic to Glasgow, Scotland aboard the Queen Elizabeth zigzagging all the way. We took a train from Glasgow to Liverpool, England during the American build up for D-Day,” he said.

“It was November and the weather was terrible. Everything was in ruin in London from the bombing. I remember going to see St. Paul’s Cathedral. All the homes and shops around the church were demolished. And there stood St. Paul’s undamaged in the midst of the wreckage.

“My trip to London wasn’t a very good experience. It was the pits. I never wanted to return,” he said with a frown.

“On Nov. 26, 1944 we were loaded aboard ships and taken across the English Channel almost six months after D-Day. We landed at Le Havre, France. The harbor was filled with the hulls and masts of sunken ships.”

One of the 3rd Army’s first big engagements during the war was capturing the medieval fort city at Metz, France. Since Jones wasn’t on the front line, he doesn’t recall much of the fighting that eventually resulted with the American victory after a protracted, bloody battle.

“We were going great guns, we were taking one little town after another as the Germans retreated. Then came the ‘Battle of the Bulge.’ Patton turned the 3rd Army around and headed back to Belgium to stop the enemy counter attack,” he said. 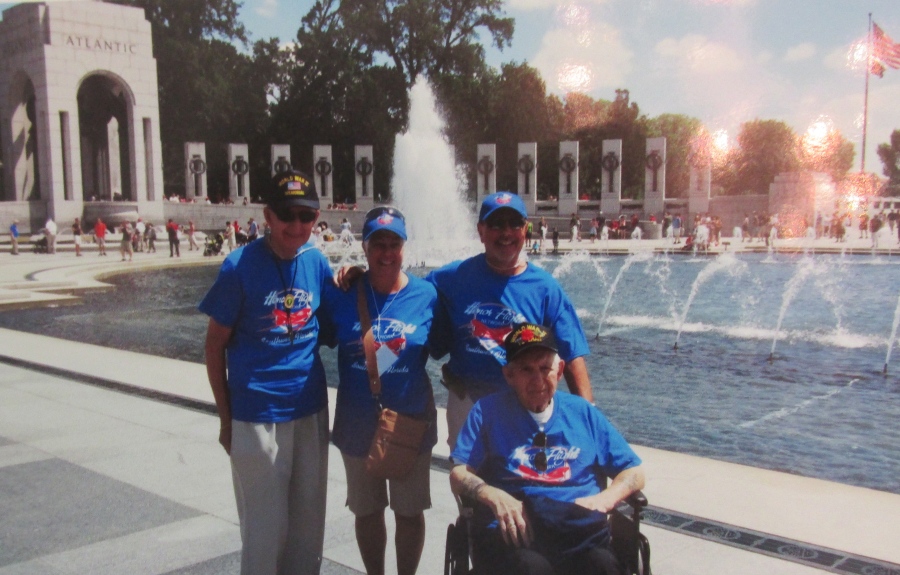 Jones is standing at the far left in front of the World War II Memorial on the Mall in Washington, D.C. He was part of the Southwest Florida Honor Flight that took the one-day trip to the capital from Fort Myers on June 14, 2014. Photo provided

“It was colder than all get out. We only had cotton field jackets and leather combat boots. We weren’t well dressed for the occasion,” Jones explained. “I ended up in a semi-truck trailer full of gas masks. I didn’t realize it at the time, but German fighter planes strafed our convoy on the way to battle.

“When we finally reached Bastogne we had to get out of the truck and dig foxholes. The ground was rock hard and it was tough to do. The ground was covered with a couple of feet of snow.”

At the end of the first week of surviving in their foxholes, Jones and his buddies not only had to protect themselves from the worst cold weather in Europe in 50 years, they had to duck the German artillery barrage raining down on them day and night.

“On Christmas Day 1944, at the end of the first week, someone came up to where we were with a decorated Christmas tree. I don’t know how it got there, but it was there.

“About this time I got to be buddies with truck driver from another outfit who I found out was from Portage, Wis. where I was born. A few days later his unit left and a couple of days after that I learned he was killed in the fighting. That kinda thing happened.”

Several weeks later the weather broke and we started advancing once more. One of the the first towns the 87th occupied was St. Vith, Belgium.

“We entered Germany on Feb. 3, 1945. The town of Wischied was our first stop. It was the dirtiest and muddiest place I ever stayed in. It was here one Sunday after church that our service unit was sent to the front lines. Our division had sustained a number of casualties after an unsuccessful attempt to take a hill. They took us out to the hill in Army trucks and dumped us off. We got ready to assault the hill with our little carbines. We were lucky, the Germans had left.”

It was one German town after another as Patton’s mechanized 3rd Army raced across the “Fatherland.” Thousands of Hitler’s soldiers surrendered to the Allies along the way.

Jones’ division captured Osterspal, Diessinghofen, Diez and Kroffelbach in quick succession late in March 1945. Then it was on to Bad Libenstein in early April and by April 14 their division had taken Rudolstadt.

On May 8, 1945–V-E Day (Victory in Europe) the war for the soldiers of the 87th Division ended in Plauen, Germany.
“Plauen was practically not a city anymore. Most of it had been flattened by bombs. I passed through it once and it wasn’t possible to tell one street from another–just a pile of rubble,” he said.

“Some of our company went to visit the concentration camp at Buchenwald, about 65 miles away. Only four from our section could go so we drew lots. I wasn’t lucky and as usual I worked.”

Part of their division boarded the the Army transport “Fred Lykes” at Le Havre for the trip back to the U.S. Their crossing was uneventful. The troops landed at Boston on July 19.

“I was home when the Japanese surrendered. We drove to Madison, Wis.to celebrate V-J Day (Victory over Japan). It was a mad and wild celebration around the square at the state capitol. It was a great time.” he said.

Jones got out of the Army nine months and two days later. He was discharged at Camp Grant, Ill.

Like millions of other young men and women he took the G.I. Bill. He returned to the University of Wisconsin where he graduated several years later with a degree in accounting.

“My first job after graduation was with Price Waterhouse in New York City. Then I went to work with the Northwestern Mutual Life Insurance Co. I spent almost all my working life there. It was a great company. After 33 years I was in charge of the company’s auditing department and an officer of the company when I retired,” Jones said.

He and Cora were married in 1951. They have two children: Jeff and Pamela. The couple moved to Nokomis upon retirement.

This story was first published in the Charlotte Sun newspaper, Port Charlotte, Fla. on Monday, July 28, 2014 and is republished with permission.

Keith L. Jones
Jul. 22, 1923 – Sep. 4, 2014
Keith Levi Jones, 91, of Nokomis, Florida passed away peacefully in his sleep on Thur. Sep. 4, 2014.
Keith was born in Portage, Wisconsin on July 22, 1923 to Merlin and Gertrude (Parrott) Jones. He graduated from Endeavor High School in 1941 and enrolled at the University of Wisconsin before enlisting in the Army in 1942. After completing basic training, he entered the Army Specialized Training Program in North Carolina. When the program was discontinued, Keith was assigned to the 87th Infantry Division. After training in Fort Jackson, South Carolina, the Division went overseas, first to England and then to Metz, France where it entered combat under General Patton and the 3rd Army. The Division saw action in the Saar, the Battle of the Bulge and in Germany including Koblenz.
After the war, Keith resumed his studies at the University of Wisconsin and earned his BBA in accounting in 1948. Keith accepted a position with Price, Waterhouse & Co., a public accounting firm, in New York City.
In New York, he met Cora Cyr (across a crowded dance floor) and they were married on October 20, 1951. In November 1952, Keith was hired as an auditor by Northwestern Mutual Life in Milwaukee, Wisconsin. He was named an officer in 1958. After 30 years in the internal audit department, Keith retired as head of the department in 1987. Keith was very active in the Institute of Internal Auditors and served as a regional director, International Treasurer and Director-at-Large for the Institute. Keith was a Certified Internal Auditor and Certified Public Accountant.
Keith and Cora had two children, Jeffrey (Donna), Jacksonville Beach, Florida and Pamela Ohrt, Cedar Falls, Iowa. They have four grandchildren, Dawn (Martin VanBrunning), Nathan (Lissa) and Jonathan Ohrt and Brian Jones. Keith was also survived by his brother, Kenneth of Bowling Green, Kentucky and half-sister, Vera Banks, of Portage, Wisconsin and several nieces and nephews.
Keith and Cora lived in Whitefish Bay, Wisconsin most of their working lives. In retirement they initially split time between Wisconsin and Florida and ultimately located permanently in the Venice, Florida area.
After retiring, Keith was active in volunteer work with Columbia Hospital and the Court Watch program in Milwaukee and the AARP tax assistance program for the elderly and disadvantaged and the Venice Theater in Florida. He also spent countless hours volunteering at the Historic Spanish Point in Venice, an historical, environmental and archeological preservation site. He was also active with the University of Wisconsin Alumni Chapter of Sarasota/Manatee, serving as President, Vice-President and on the Board of Directors.
Keith and Cora traveled extensively throughout the Caribbean, Europe, the Greek Islands, Russia, Australia and New Zealand. They have visited all 50 states as well as many areas of Canada. They also participated in a number of Elderhostels both in the US and Europe.
Keith enjoyed jogging and participated in many runs, including runs held in connection with Northwestern Mutual’s annual agents’ meetings. He also enjoyed tennis and golf.
Keith and Cora met dancing and they continued dancing passionately through six decades until just days before Keith’s final illness.
Funeral Services were held at Our Lady of Mount Carmel Catholic Church with burial following at Sarasota National Cemetery, with military honors, on September 11, 2014. Contributions in Keith’s memory may be made to The Muscular Dystrophy Association