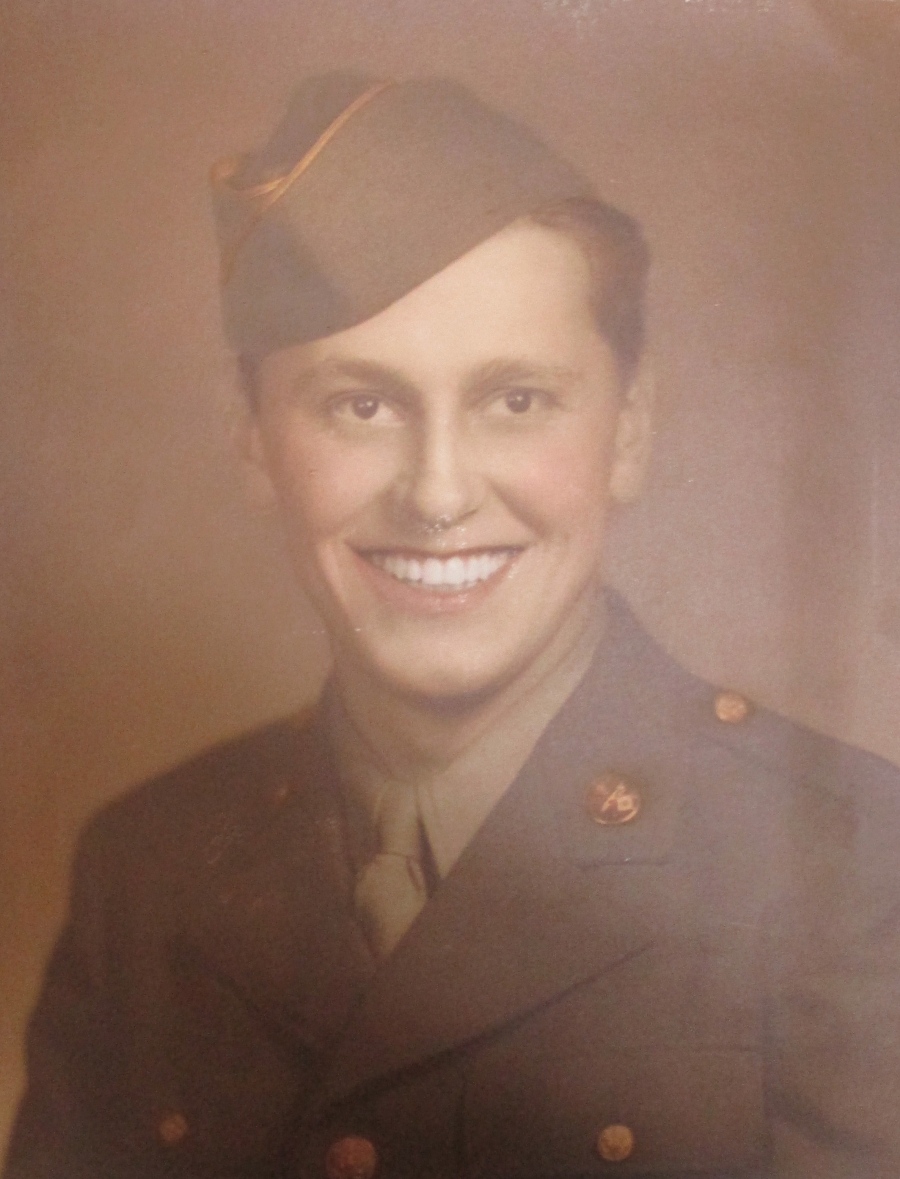 Pfc. Joe Falis at 20 when he was a member of the 718th Signal Air Warning Company in Europe during World War II. Photo provided

Pfc. Joe Falis at 20 when he was a member of the 718th Signal Air Warning Company in Europe during World War II. Photo provided

Joe Falis tried to sign up for the service the day after the Japanese bombed Pearl Harbor. Trouble was, he was only 17 and he had to have his parents’ permission.

“My older brother, Mike, who was already in the service, sent my mother and father a telegram: ‘Don’t let Joseph sign up for the service,’ it read he remembered almost 75 years later. “No way were they going to sign me in. I had to wait for the draft.”

Falis ended up as a radar operator. He trained for the job at Drew Field in Tampa. Today Drew Field is Tampa International Airport.

“We use to go bivouacking along the Myakka River in Charlotte County when I was in the Army at Drew Field. It was loaded with snakes, believe me,” he recalled. “Back then I thought it was hell on earth. Now, more than 70 years later, I’m down here retired living about six miles from where we bivouacked and I think it’s Paradise.”

After three months of radar school he sailed on the Queen Mary for Scotland and the war in Europe.

“We were told there were 10,000 troops on the ship. All I recall is they stacked our bunks 15 high. I was on the bottom bunk and the guy on the top bunk was seasick and puking. I spent most of the trip sleeping on deck,” he said 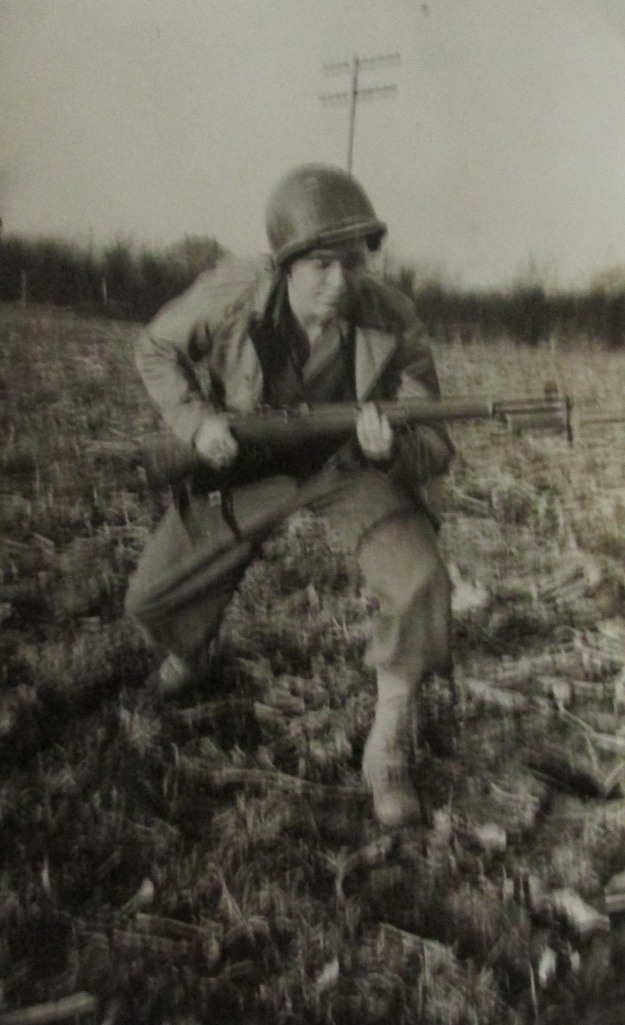 Joe is clowning around for the camera with his M-1 rifle. Photo provided

The 718th Signal Air Warning Company landed at Lockerbie, Scotland on the north end of the island nation.

“I was a private first class. The reason I was never more than a Pfc., ‘Praying For Civilian,’ was because I was a wise guy. The first sergeant hated my guts,” Falis recalled with a smile.

It was almost midnight when they sailed into port, but it was like noon here because they were close to the North Pole.

“We were on deck shooting craps and smoking cigarettes. A couple of MPs came along and arrested us for violating curfew by smoking at night, but it was broad daylight. The MPs said we violated the blackout law and took us to jail, but nothing ever came of it.”

Shortly after arriving in Scotland, Falis and his unit were moved to a Royal Air Force base further inland. There wasn’t much to do, so he pulled guard duty.

“This guy rolled up on his motorcycle and I stopped him and asked him for his identification. He told me, ‘I’m Maj. Gen. Quasata your commanding officer.’

“‘You’re not going through,'” I responded.

“I put a bullet in the chamber of my rifle. I was going to shoot his tire out. He turned around and drove off on his motorcycle.”

The next morning Falis went to see his company commander and told him what had happened to him on guard duty the night before. The captain told him not to worry about the incident.

“The next day the colonel came down to talk to me. I knew I was in trouble,” he said. “I saluted him and he saluted me back. Then he shook my hand and said, ‘Falis, I didn’t think anyone had the guts to tell the general that.’ Then the colonel added, ‘We can’t help but win this war with guys like you.'”

The Normandy Invasion was the next big event the 20-year-old soldier took part in on June 7, 1944.

“We went into Omaha Beach at Normandy in landing crafts on D-Day plus one. We brought our portable radar equipment with us,” Falis said. “When we got on the beach we were told we had new radar equipment coming. So we just waited around three or four days for the equipment.

“The English Channel was red with the blood of dead American soldiers. Bodies were still lying on the beach where they fell. They were bringing more bodies back to the beach from the front line in 2 1/2 ton trucks. The bodies were stacked on these trucks like cord wood.”

A few days later he and his outfit arrived in a little French village with their new radar equipment.

“There wasn’t a lot left of the German air force, so we didn’t have a lot to do,” he said. “It was a lot of hurry up and wait.

“While in this town I did save this American girl from being accused of being a German collaborator and getting her hair cut off by the Resistance. She had been a chorus girl in a Paris show when the Germans marched in and took over the country.

“We were down in the town square watching the Resistance get even with those who cooperated with the Germans during the occupation. She grabbed me and told the Resistance I was her boyfriend. I agreed with her and they didn’t shave her head.” 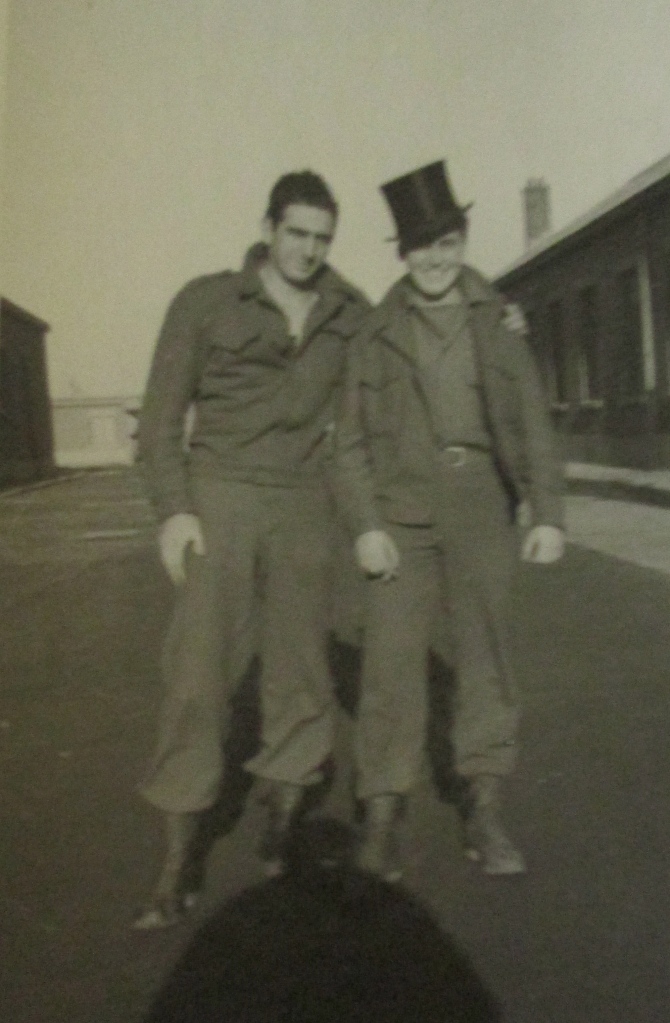 Joe found this stove pipe hat in a bombed-out Belgium home. He and his buddy were near Aachen, Germany in Belgium when the picture was taken. Photo provided

Since there was little for Falis and his unit to do, they decided that the American troops would hold a dance in the town hall to celebrate the Normandy landing and invite the French.

“There was a Nickelodeon in the building and we had a portable generator to make it run. Our company commander gave us permission to use our generator to power the record player and the dance was on,” he said.

“There was also a company of Polish paratroopers in the town. We had a guy in our unit that could speak Polish and I could speak a little Slovak. So we got along well the Poles.

“I never got all the way to Germany. I was wounded at the Battle of the Bulge along the Belgium-German border. When the Germans broke through at the Ardennes our unit was sent up there as line troops to help stop them,” he said. “We went there with our radar equipment and were about to be overrun by the Germans. So we blew up our radar unit.

“The Germans never broke through where we were, but they were firing buzz bombs at us. I was injured when one of these bombs exploded near me. It was Jan. 9, 1945 when I was hit in the leg and ankle by shrapnel from a V-1 rocket.

“When I woke up in a Belgium hospital three doctors were checking my wounds. One doctor said, ‘Give him a Purple Heart.’ But another said, ‘No, he’s not bleeding.’

“I decided if the doctors couldn’t make up their minds whether I should receive a Purple Hart for my injuries I probably didn’t deserve a Purple Heart and just dropped it.”

Falis spent the next eight months in various hospitals in Belgium, France and the U.S. recuperating from his injuries. He was discharged on Oct. 21, 1945.

Back home in Meriden, Conn. he was getting his paycheck cashed at a local bar & grill when he had an improbable encounter.

“This guy came over to me and asked, ‘Were you in the war?

“And then he asked if I was at a particular French village, which I can’t remember the name right now? Again I said, ‘Yes.’

“‘Do you remember the Polish paratroopers that were there?’

“‘You helped provide the electricity for a dance we held in town and we all celebrated the invasion,'”

Falis couldn’t believe what he was being told by the former paratrooper.

“What are the chances of meeting this guy in my home town decades later that I had been with in the war in Europe? He picked me out and remembered I provided the electricity for the dance?”

After working on the line for G.M. before the war he went back to work in the auto industry after World War II for a short while. Eventually he worked for Landers, Ferry and Clark, makers of vacuum cleaners and coffee pots. It was here he became the president of the United and Electrical Mechanical Workers Union at the manufacturing plant.

For the last 18 years of his working career, Falis got a job working for the Hartford Ball Company in Hartford, Conn. They produced ball-bearings for industry.

He and his wife, Veronica, moved to the Englewood area 25 years ago. They have three children: Susan, Joseph and Thomas.

This story was  published in the Charlotte Sun newspaper, Port Charlotte, Fla. on Wednesday, July 16, 2013 and is republished with permission.