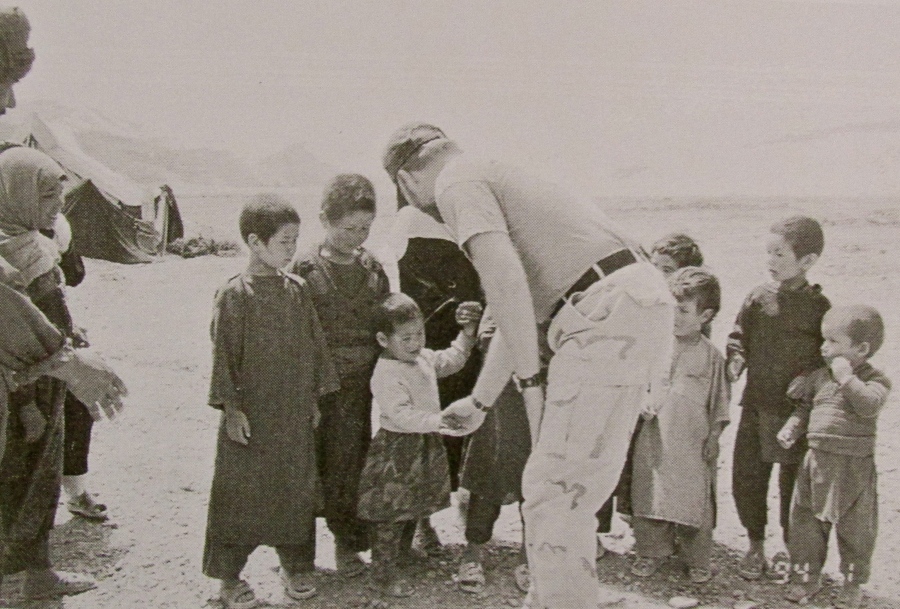 Sgt. Joe Smith shakes hands with Hazara children in central Afghanistan. He helped establish a radio station in the province for the local people. Photo provided by the Smith family

“Radio Bamiyan” is what it’s unofficially called. The tiny, 400-watt station established six months ago by Staff Sgt. Joe Smith, chief of the U.S. Army Psychological Operations group stationed there, is helping change the hearts and minds of the 50,000 inhabitants of the Bamiyan Valley in the central highlands of Afghanistan.

Like most of Afghanistan, the valley is an agricultural region. It’s about the size of the state of Delaware and populated by the Hazara, an Asian people who consider themselves the first Afghanis. They live in mud huts and eke out a living as vegetable farmers. They’re Muslim.

Smith, 34, and his wife, Terry, spent the Christmas holidays with his father and mother, Joe Sr. and Joan Smith of Port Charlotte.

“Our mission in Afghanistan is to help maintain stability. Toward that end, we built the radio station to help get the word out to the people of the area,” Sgt. Smith said. “We air-dropped small, battery-powered radios to many people in the province so they could listen to the station.”

Although “Radio Bamiyan” is only on the air about three hours a day, it provides local news, national and international news and consumer programming. For example, it cautions its listeners to watch out for land mines that pockmark the area, or it may talk about the results of yesterday’s soccer game. The station cautions its listeners to boil their drinking water before using it and to wash their hands before meals. On occasion, Radio Bamiyan may interview a doctor about public health problems or a politician concerning the state of government.

“Even for those who don’t own a radio, the station is a source of pride for them. Having a station in their province is special,” Smith said.

U.S. Army troops do more than run the local radio station for the farmers of the region. They have other humanitarian projects in the area. Some are as simple as handing out fliers cautioning against disturbing land mines or as complicated as helping build homes for the local population.

This flier, distributed to Afghanis in Bamiyan Province by U.S. troops, cautions them to stay away from buried land mines.

Because of the Asiatic background of the Hazarans, they are landlocked by other unfriendly ethnic groups. Chief among them in recent years are the Taliban, who are primarily from the Pashtun tribe.

“This is the area where the Taliban blew up the 1,400-year-old massive Buddha statues carved into the sides of local mountains,” Smith said. “They first tried to destroy the two large statues by shooting them with tank shells. When that didn’t work, they wrapped a bunch of land mines around them and blew them up.

“The Hazaran people view the destruction of these statues as a tragedy because they brought credibility to the area. Back in the ’60s, when this area was more stable, these statues were a big tourist draw which helped the local economy.”

Eventually the Hazaras hope to rebuild the statues, and presumably, their local economy.

“When the Taliban first tried to take over their province the Hazara resisted and kept them out,” Smith said. “On their second try the Taliban brought tanks and overwhelmed the local people with their firepower.

“The Hazara hate the Taliban because they massacred a lot of their people. They were very happy to see the Taliban go and us come in,” he said.

According to Smith, Bamiyan Province is quite progressive in comparison to other areas of Afghanistan. They look forward to working with American troops to improve their life.

“With our help, the people of Bamiyan built 180 homes in recent months. The (U.S. Army Corps of) Army Engineers brought in the rock and the mortar to the building sites and the people did the construction. Using local rock for walls, the homes had three crossbeams cut from trees to support a thatched roof,” Smith said. “If these homes hadn’t been built, many of the children in the community would have died from exposure this winter.”

Downtown Bamiyan is comprised of a single main street with adobe-like shops on either side. There is also a main market in town that sells everything from vegetables to Pepsi-Cola bottled in Saudi Arabia. There are no paved roads in the province and no electric power plants.

Marco Polo, the 13th-century Venetian explorer, would have been right at home.

Despite the primitive lifestyle of the natives, Smith wasn’t surprised. The Reserve sergeant has been in the service for 18 years. He’s served in Bosnia and a half-dozen other locations around the world, and has seen a lot of primitive cultures.

When he isn’t serving as a citizen soldier, he works as a computer expert with The Consumer Group’s Risk Strategic Business Systems in Irving, Texas.

Recalling his six months in Afghanistan while enjoying the company of his parents at their Port Charlotte home recently, Smith said, “The Hazara are definitely tired of war and tired of fighting. They want to have a stable government. For them, stability equals prosperity. However, I think it will take a long time for peace to settle in that area.”

This story was first published in the Charlotte Sun newspaper, Port Charlotte, Fla. on Thursday, Jan. 7, 2003 and is republished with permission.